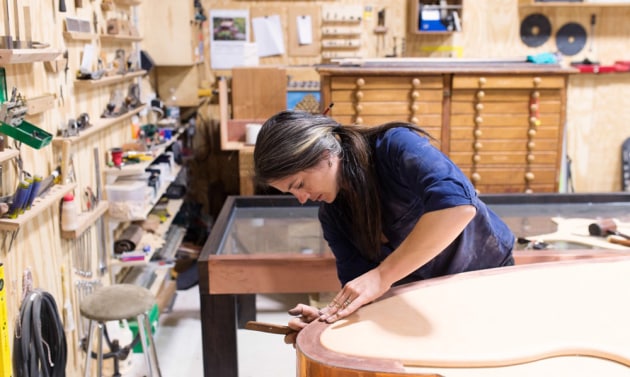 When furniture maker/designer Laura McCusker and husband Peter Howard decided to move to Hobart from Sydney for a change in lifestyle 12 years ago she had expected to pack up her furniture making and return to university to retrain. They had two young children and were moving to a state of just over 500,000 from a city of five million.

The idea of trying to establish herself in a much smaller market appeared beyond what circumstances would allow. So furniture making at best would be something done on the side, as time permitted. She could not have imagined at the time the positive changes to her professional life the move would actually engender. 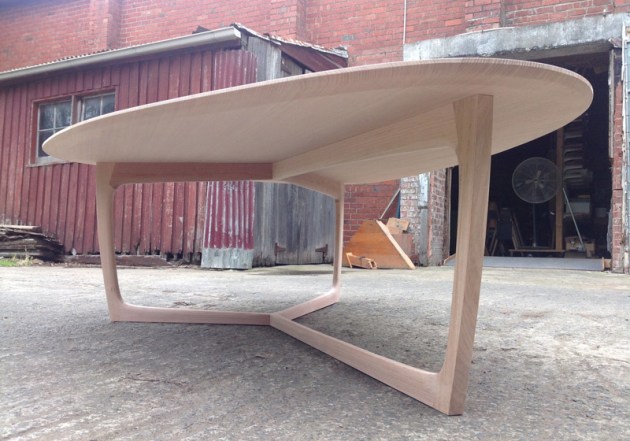 There seems to be no single and certain path to becoming a furniture maker and Laura’s journey is as variegated as anyone’s. Realising at the start of a degree in architecture that it was the furniture inside the buildings that inspired her most she promptly traded the purview of academia for a cabinetmaking apprenticeship.

Whilst having gained an important understanding of the rigours and economics of working under commercial imperatives it wasn’t until she began a one year course in the furniture program at Sturt School for Wood that she felt more certain she was moving in the right direction. 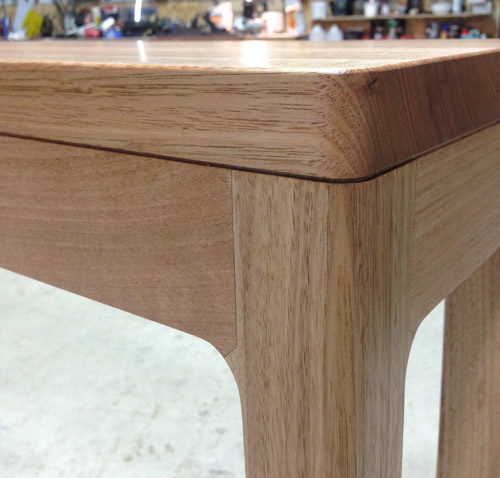 Upon completion she returned to Sydney to establish her business, working out of the well known furniture/design cooperative Splinter Workshop. After seven years of selling her award winning designs in retail and gallery outlets the pressures of juggling her work and raising a young family in the increasingly expensive inner-city the decision to move was made. She and her family have never looked back. 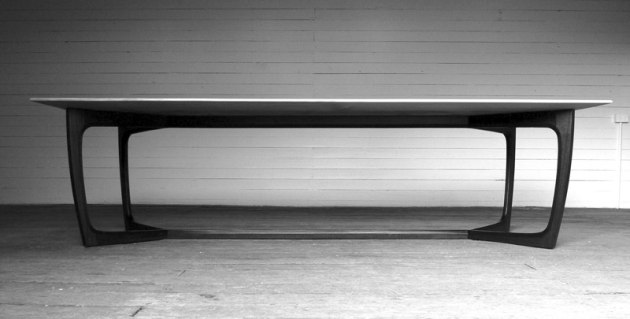 On a recent visit to the Apple Isle with my family I had the pleasure of dropping in on Laura and hers. As a maker it is always interesting to see another maker’s workshop, see the layout of their machines in relation to what they make, what tools they use for which jobs. You can learn a lot about their processes this way and of course about your own.

I’ve often found a strange dichotomy where the most leanly equipped workshops are often the busiest as that is all
they are set up to do, whereas the more elaborate setups are devised to create an impression more than furniture.

Safe to say Laura maintains a very busy workshop with all the hallmarks of hard gained experience and practical intelligence. Add to that the glory of what the location has to offer and you have the kind of workshop most bespoke makers could only dream about.

Housed in a spacious, old, wood-lined apple shed, located on the grounds of what was once an Edwardian orchard in the inner north of Hobart, it is immediately tangible what has been gained by the move as you walk through the gate toward the workshop. Set literally next to a babbling brook it would be impossible not to benefit from the serenity. But uncrowded peace and quiet are hardly the only aspects this setting offered up. 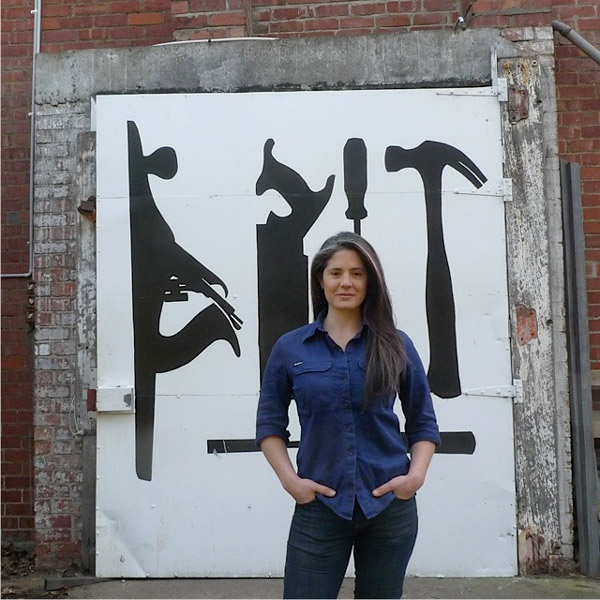 It seems ironic that moving away from one of the most populous cities in Australia to one of the least would result in the growing of Laura’s business rather than the shrinking she had predicted. But to her great delight that is exactly what has unfolded since their arrival. Not only has her business grown, with husband Peter who had been working in arts administration joining her in the workshop, learning the trade at her side to keep up with demand, but the nature of it has changed as well.

Where once Laura sold largely through retail mainly in Sydney and Melbourne, the majority of work now comes through direct contact with clients and she is building furniture for people not only throughout Australia but worldwide.

A situation she has found not only liberating but has led to a greater variety in the work she now produces. Laura believes this has coincided with the explosion of interest in handcrafted furniture
which has resulted in a client base that better understands the differences between hand and mass- made, and thus originality and durability. 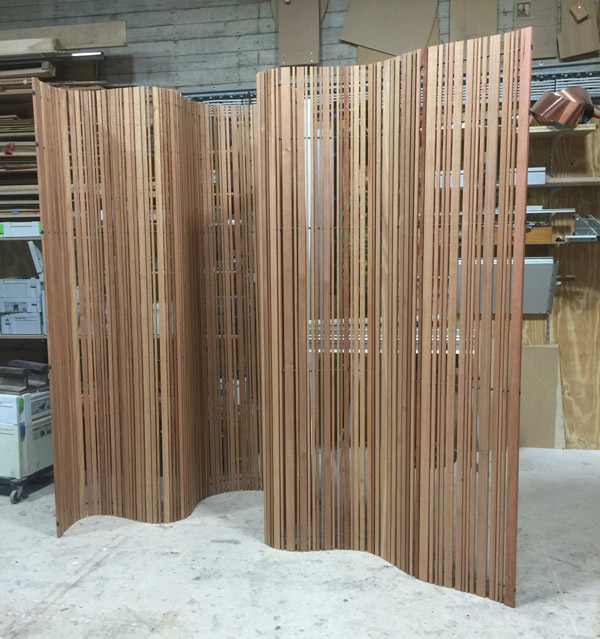 Tasmania is well known for its exquisite and unique furniture timbers though amongst woodworkers it is just as well known how finite this resource is with a number of species no longer logged, no longer available commercially or sourced on a smaller scale through dredging.

Sustainability is at the forefront of Laura’s design ethic. She builds her furniture with longevity in mind, always fully cognisant of the provenance of the materials she uses. When she arrived in Tasmania 12 years ago the timber industry and everything surrounding it was in a politically fraught state. As an outsider, ignorant to all the ins and outs, Laura opted not to engage whilst giving respect to all sides. 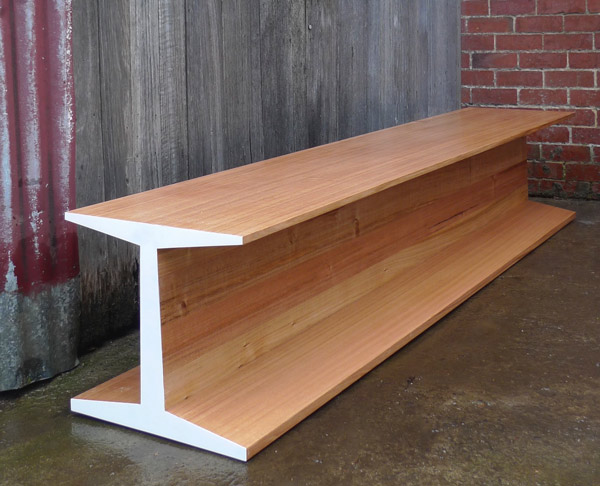 With so much sensitivity surrounding so many local species she followed her natural inclination of letting the
lines and shapes of her designs do the talking. The species most promising in terms of strength and simple beauty also happened to be the cheapest local eucalypt hardwoods used mainly in construction. She views her use of Tasmanian oak* as a way of elevating her designs rather then competing with them.

Always milled on the quarter or rift for drying stability Tas oak shares the neutral, utilitarian qualities of species commonly used in mid-century furniture, the design qualities of which Laura declares herself a fan. Indeed, the ideals behind much mid-century design of high functionality, elegantly pared back aesthetic twinned with swift but quality led production apply equally to the beautifully simple lines and spare shapes of Laura’s own bespoke pieces. Her acute understanding of her chosen material and innate sense of balance and proportion is a showcase of a craftsperson at the top of her game. 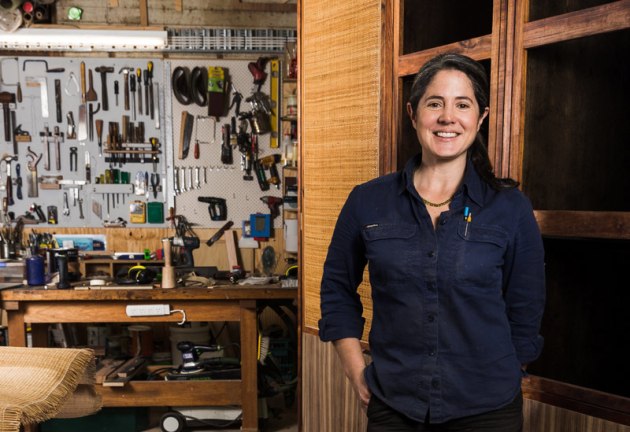 Having moved from the hyper trend oriented design world of Sydney to a place where she has felt free to evolve her aesthetic far more organically Laura now finds her designs being driven more by the needs of her clientele. She cherishes the pact-like trust that comes with engaging one on one. The surge in people preferring handcrafted over off the shelf coincided with her move away from retail and a realisation that more and more people wanted a connection with the maker and to feel that a piece is made just for them.

Laura’s achievements as a designer and maker speak for themselves but her mind is set positively in the present with a wise eye to the future and what it can throw up. In her own words, ‘if I could go back in time 15 years ago to talk to the younger me and say “you will have two kids, you will be able to own your own home and have a business that supports the family and your husband will be able to work with you making furniture, doing something you love?”’ The smile over the shrug says it all.

Bern Chandley is a Melbourne based bespoke chair and furniture maker. He appeared on the cover of issue 91 and was profiled in that issue. Learn more at www.bernchandleyfurniture.com

AWR L!VE is proudly sponsored by: