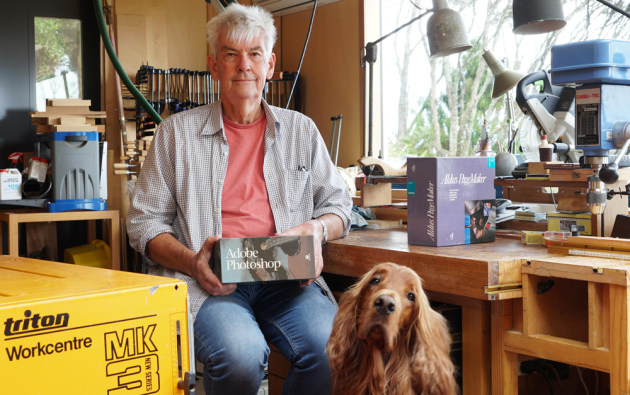 Above: Wood Review illustrator Graham Sands with some of his tools of trade, and his faithful workshop companion.

Readers of Australian Wood Review magazine will be familiar with the beautiful diagrams and exploded constructional views that accompany the articles we feature. Graham Sands lives in Auckland, New Zealand and since 2006 has illustrated no less than 86 stories for the magazine, including 13 which featured his own projects.

Graham’s own how-to stories have documented furniture made for his own house, a refit of his 70s VW Kombi van (still in use), and items made for his workshop including his ‘spacesaver’ workbench, a mitre bench, drill press and cube stands. We’ve also seen his work in the magazine as an entrant for Wood Review’s Studio Furniture 2008, My Shed competition and Coolest Power Tool features. In addition, in 2008, when still living in West Australia, Graham took a cover shot for the magazine – the portrait of Neil Erasmus that featured on issue 58. 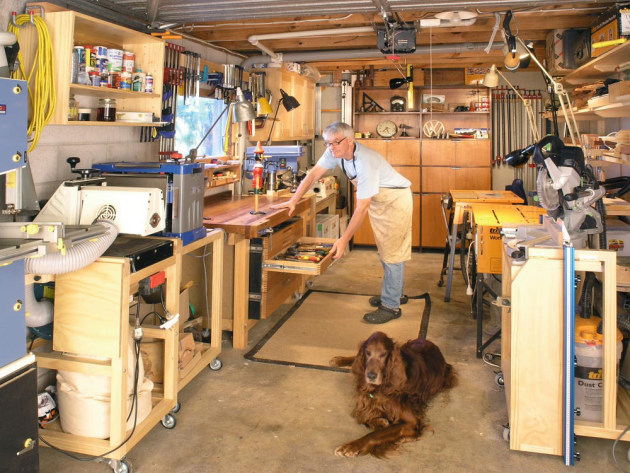 We asked Graham a few questions about his life before woodworking, and how he developed his uniquely all-round skills:

AWR: Tell us a little about your background and prior profession as a photographer?
GS: When I was a boy my father who was an architect showed me how to draw perspectives with two pins as vanishing points on a drawing board, a T-square, set square and pencil. I was fascinated. He also encouraged me to take photographs with his fold-out camera. I initially started work as a draughtsman in his office and then moved on. Knowing how to use a camera I began photographing completed buildings for architectural competitions and submissions for proposed buildings. At the time I edited, typed and duplicated the WA Audio Society News then the WA Riley Club News monthly for many years. Familiarity with the typewriter was a great kick start for me into desktop publishing when it appeared in the eighties.

In 1990 I snapped up the first version of Photoshop and was then able to montage photos of models into photos of the site without using a scalpel and printed photos. Architectural drawing and three dimensional visualisations and animations were then being done with computers and I was including them in the layouts with my photos for submissions and screen presentations; this rekindled my interest in drawing perspectives.

Throughout this time I had an interest in high fidelity equipment and tape recording. Outside my day job, with good friends we set up a recording studio in West Perth and later formed a sound hire business Audex which continues today. In our warehouse unit in North Perth we had a secondhand Altendorf panel saw and a large DeWalt radial arm saw with which we made speaker enclosures and road cases with plywood. We had great respect for these machines and avoided any 'industrial accidents'. This was an introduction to woodworking of sorts.

In Tambour on Tour (AWR#69), Graham Sands described how he refitted the blue 1972 VW Kombi which he still drives today.

AWR: How and when did your interest in woodworking develop?
GS: After moving into a new home in Swanbourne we had a shed built in the backyard so I bought a Triton workstation from Swanbourne Hardware. After using it mainly to cut firewood I built some shelves either side of the fireplace. With four newly bought Quick Clamps I rebated jarrah veneered MDF into solid 50mm jarrah edges, they turned out really well. I was chuffed! I enjoyed reading and learnt from the ‘Triton Times’. My partner Gabrielle asked me if I could build a bench seat for outside. I made it with jarrah from our demolished laundry, entered it in the timely AWR ReMade competition and won a Recycling Award AWR#49. Flushed with success I made a workbench with drawers for tools, then discovered Carbatec and Woodstock (which became Timbecon) in Western Australia. These were gold mines of wonderful tools and machinery… 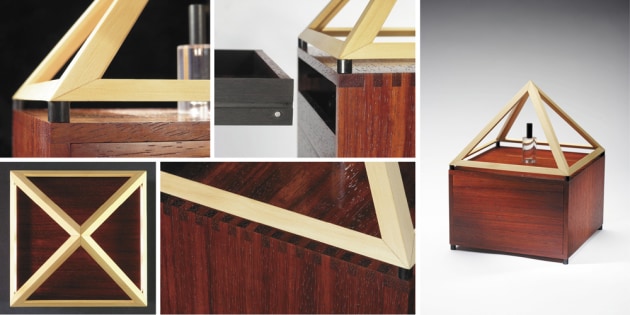 Above: A selected entrant for Studio Furniture 2008, Graham created his Ark of Padauk a box with four secret ‘tomb-like’ chambers which can only be opened one at time with magnet key. The box has a pyramid on top made to the same proportions as that of the Great Pyramids of Giza based on 1:1.618 aka the Golden Mean. Made from African padauk, Huon pine and ebony.

AWR: Are you a hand tool, power tool or machine kind of guy? What is your favourite machine and why?
GS: I still have and use my Triton which has been complemented by a track saw for many years now, which I have to say is amazing. I have been in a quandary over buying either a new table or panel saw, but I am still deciding. I most like using my drill press which I have mounted such that the table is fixed and the head moves (AWR#54). It is quiet and precise. I have and like using hand tools as well, especially Australian ones.

AWR: Many of the exploded drawings you do are created just by looking at the photos our authors supply. What’s your process in brief? Do you enjoy this work? What are the challenges?
GS: I study the story/text and then build the project in a 3D application using the dimensions provided in the author’s sketches or cutting list. It is as if I was actually building the piece, potentially like readers can. Occasionally I uncover something which doesn’t quite work, which is handy before the story goes to press. I then ‘pull it apart’ so all the parts can be seen, notated and show how they go together. I like the challenge to provide diagrams as soon as possible prior to deadline. I look forward to this each issue and find it immensely rewarding to see my illustrations published. 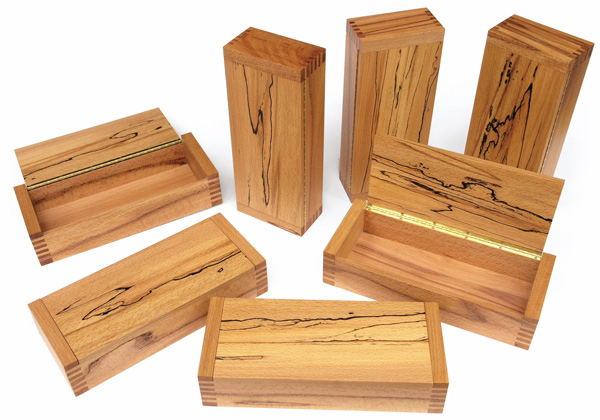 Above: Graham Sands wrote about the making of these spalted fingerjointed boxes in AWR#51.

AWR: What are your main interests in terms of what you like making?
GS: I make furniture – freestanding and built-in, small boxes, and enjoy making stands and jigs for my new workshop here in Titirangi, New Zealand. I like ‘modern’, simple forms, smooth flat surfaces, square edges, mitres and finger joints.

AWR: What are you making at the moment – will we see it in Australian Wood Review magazine?
GS: I have just finished a large mid century style sideboard to house mainly projection and sound equipment. I am about to take final photos of it to add to the production shots, then write a story and submit it.

AWR: What’s the hardest thing about woodworking?
GS: Making decisions to proceed with the cut when there is only just enough material and no recall. Glue-ups can be stressful.

AWR: …and the easiest?
GS: It is all easy when finished!

See links to related articles by Graham Sands at the top of the column to the right on this page.