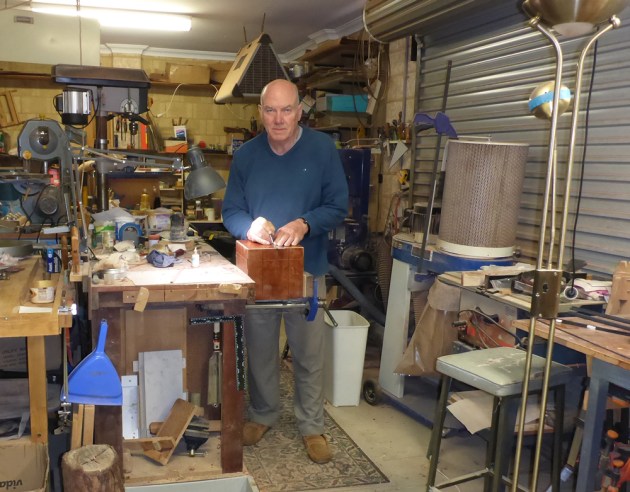 Working on a very small scale can be very demanding, as every woodworker knows. One of the entrants in the Bowls & Boxes category of this year's Maker of the Year Awards, presented by Carbatec, revels in the accuracy required, and compounds this literally with layers of complexity.

Martin Burgoyne (pictured above in his Perth, Western Australia workshop) entered three pieces: Starry, Starry Night, Night Sky, and Incense Box. Below he provides us with more information about the fascinating Japanese ceremony which inspired his Incense Box. 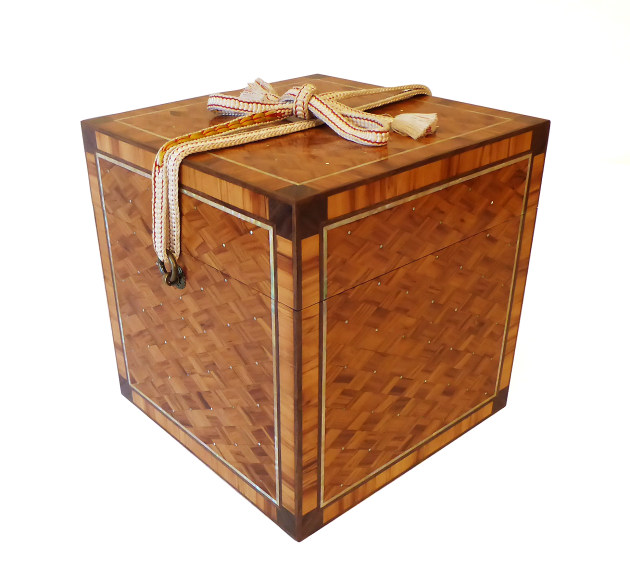 I have been fascinated by Japanese boxes for a few years now. The diversity of their styles and unique uses has provide me with the inspiration to do something different. Kodo, the Japanese Incense ceremony, and its equipment have been a particular interest.

One of the classic Japanese aesthetic arts, kodo is less well known than the others: the Tea Ceremony, ikebana (flower arranging), calligraphy and kabuki theatre. While kodo is a lesson in aesthetic appreciation, it also developed into a game. These games are called kumiko, not to be confused with Japanese kumiko screens.

In kumiko, participants are pulled into an elaborate guessing game where they have to use their olfactory senses to identify different incense woods from the aromas they give off when heated. These games, with up to ten participants, are played following an artistic ritual code of practice. They use exquisitely decorated equipment, all housed in a kodogubako. Kodogu is incense equipment, and bako is box. 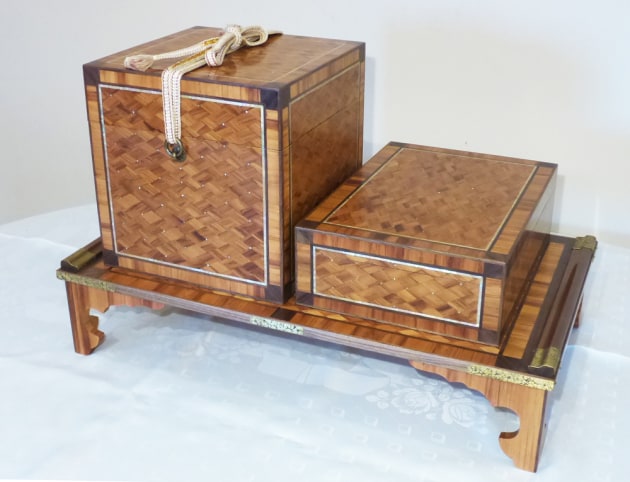 While my kodogubako was entered in the Box category of the MOTY, it is also part of a suite of incense furniture that I made during Western Australia’s covid isolation. The other pieces are a document box (ryoshibako), and a writing table (bundai).

Traditionally these pieces would have been decorated with gold maki-e lacquer of the highest quality. However, as this technique is beyond me, I looked for another decorative medium that I hoped would suggest the Japanese style. So, all the pieces are decorated in a teak parquetry diamond pattern with shell stringing, dots and contrasting edging and bandings of walnut. This extends to the trays and smaller boxes inside the main incense box. Many also have sprinkled gold dust interiors – a typical Japanese technique. 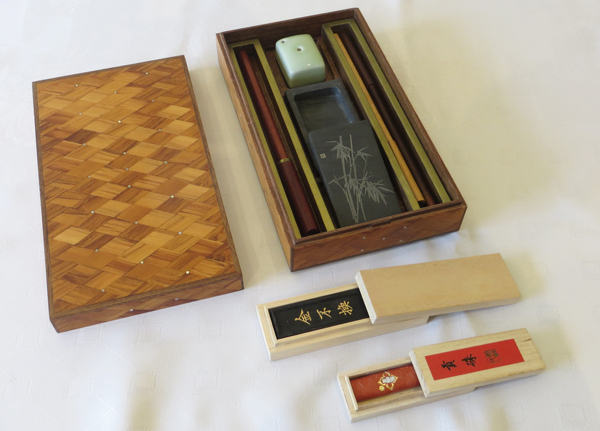 The main box tied with traditional Japanese kimono cord opens onto four layers of trays and smaller incense boxes. The first layer comprises two boxes. A writing box (suzuri-bako) holding an inkstone, water dropper, calligraphy brushes in their own trays, and black and vermillion ink sticks in their own small boxes. Its up-turned lid is used as a tray for collecting the answer sheets from participants. 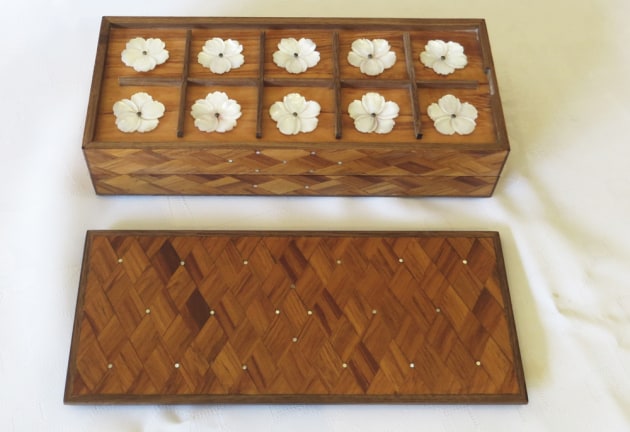 The other box contains the incense display board – honkouban, where the incenses used in the games are displayed on the two rows of shell flowers – kikuza. 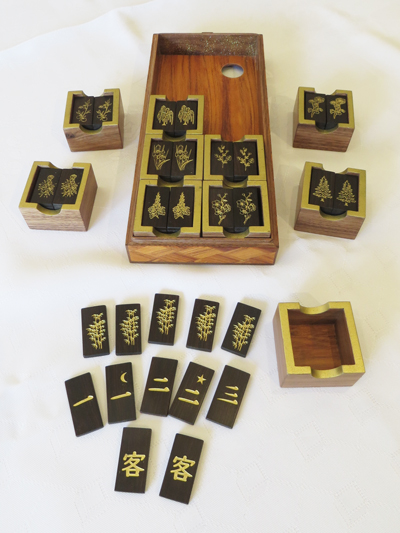 Below the display board are ten small walnut boxes holding sets of twelve voting/answer tiles (ko-fuda), a total of 120 tiles!! They are made from ebony with laser engraved motifs filled with gold paint.

One side of each set has a unique motif which identifies the participant using them. The other side has Japanese characters for 1, 2, 3, and ‘guest’. Participants use the tiles to indicate which variety of incense they think they have sampled after each round.

The second layer is another incense tray (koban), holding a range of fabric accessories sewn together for me by my ever-patient wife. The large, folded purple backed patterned fabric cloth shown a few images below is used like a tablecloth. On top of this goes most of the equipment stored in the main box. A small brocade wallet contains a set of fire tools (hidogu) used to prepare the incense burners. 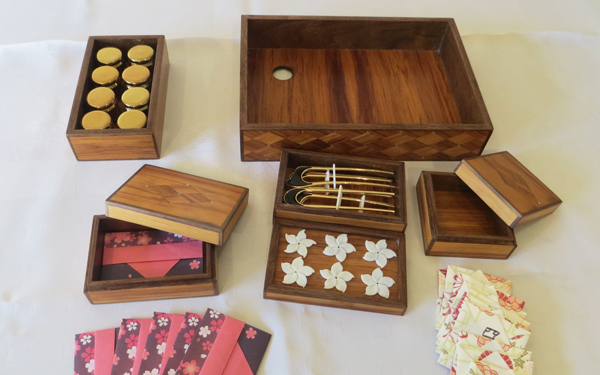 The smallest box contains ten numbered origami paper packets to store the answer tiles after each round of the game.
A rectangular box contains the paper packets of incense used in the games. A third box has a small incense tasting/display board on the lid, used to display the incense prior to the game. It holds a set of skewers used by the the ‘master of ceremonies’, to keep the opened packets of incense in the correct order. 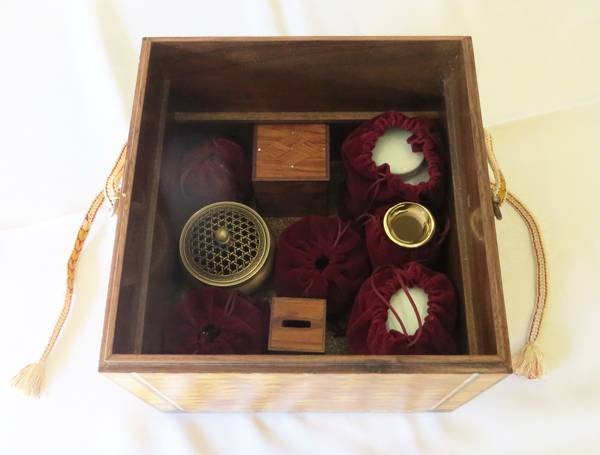 The fourth box holds eight small ceramic jars (kōgō), containing different incense wood chips. In the bottom of the box is a range of ceramic containers in velvet bags, plus two more small wooden boxes. One is a three-tiered box, a jukogo used for storing charcoal blocks, mica plates for use with the incense chips, and burned-out incense with their mica plates. 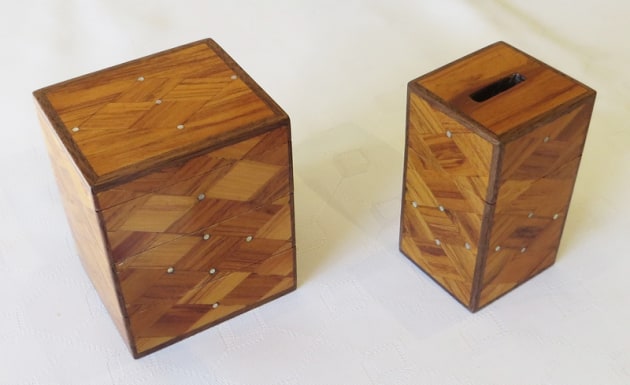 The other small box is a voting box (fudazutsu). It has a small slot in the top where participants deposit their ebony answer/voting tiles at the end of each round. 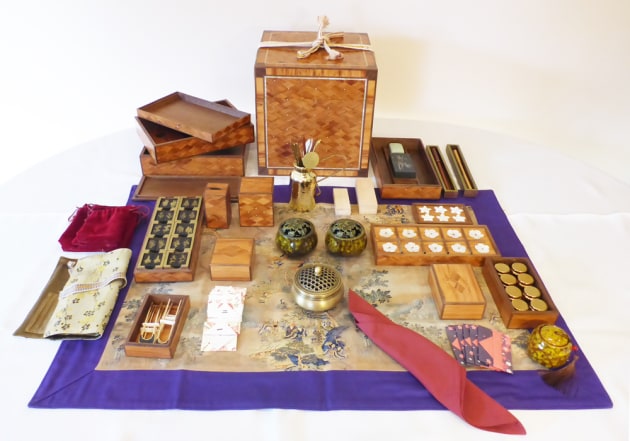 The box and all its contents are shown above.

About halfway through making the Incense Box, I decided to make the full suite of incense related wooden items to go with it. 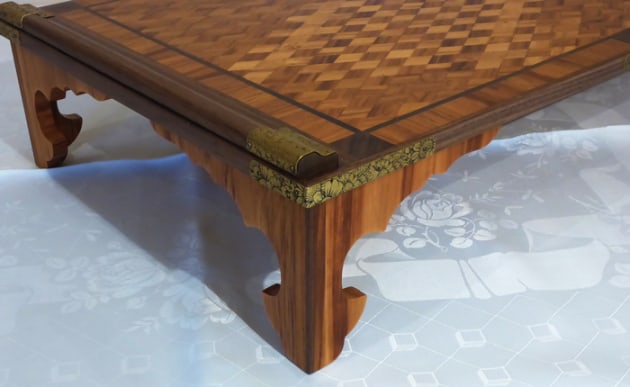 The first was the writing desk (bundai), which continues the teak parquetry design. While the short legs may look odd, one must remember that traditionally Japanese people lived at floor level and sat on the floor rather than on chairs. Typical traditional features are its bracket legs, the moulded raised strips across the ends, and the brass etched reinforcing pieces on the corners. 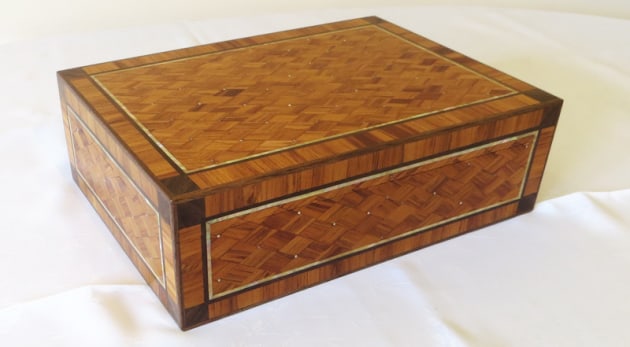 The last piece, the document box (ryoshibako) is large enough to hold A4 sized paper. It is made from veneered plywood, with the same exterior design features. The inside is enhanced with sprinkled gold dust. It holds answer papers used by participants, and the special record sheets of the games.

These last two items are used by the official recorder of the games. They use the contents of the writing box contained in the main incense box and record the details of the game, and the participants answers in the most elaborate calligraphy. At the end of the game the record sheet is carefully rolled, tied with ribbon, and presented to the winner.

A key element of this whole project was the research into kodo and the sourcing all the equipment. This, of course, dictated the sizes of the box and the internal layout. Designing the box was interesting as usually I make boxes to ‘rough’ sizes that don’t particularly matter if they end up a few millimeters out. But with this one everything had to fit exactly, so sizes and tolerances were super critical!

See THE TOP 100: shortlisted entries for Maker of the Year. Award winners and finalists will be featured in our next issue (#113), out end November.