My partner Gabrielle and I both have fathers who were architects in the ‘mid-century’ and have lived in modernist houses and appreciated them along with the furniture of that era. For many years now we have been window shopping Danish mid-century sideboards. 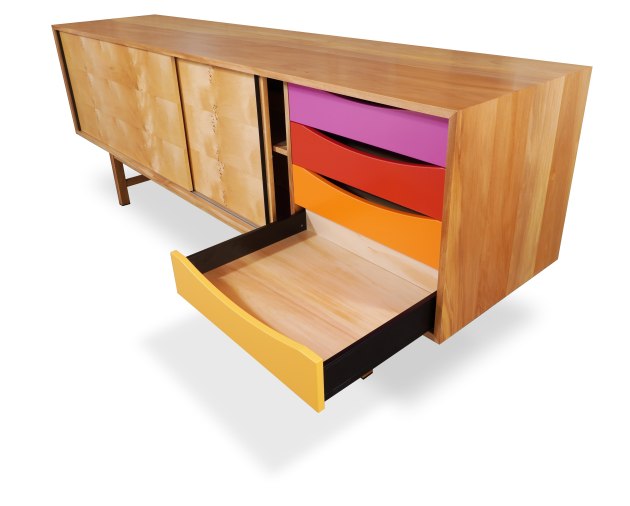 A media and audio storage unit was required for our recently refurbished library/gallery/yoga room. None of built- in schemes I drew up really appealed so the idea of making a Danish mid-century style sideboard grew.

I envisioned the grain of the timber ‘water falling’ from the top over mitres down the sides and planned to use some of the Huon pine veneers I had for the sliding doors. 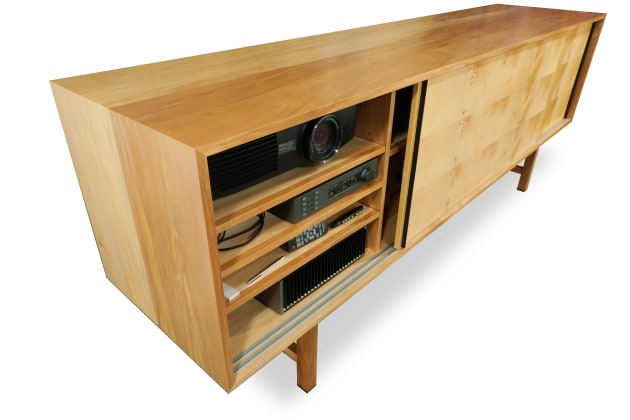 Sideboards are generally are around 450mm deep, too small to house a projector requiring 100mm air space behind for ventilation resulting in a cabinet depth of 560mm. If I was to make one a suitable size, I wanted it to be of similar proportions to the Danish ones so the concept was for a 2400mm long sideboard that, in a large room, wouldn’t be out of place. 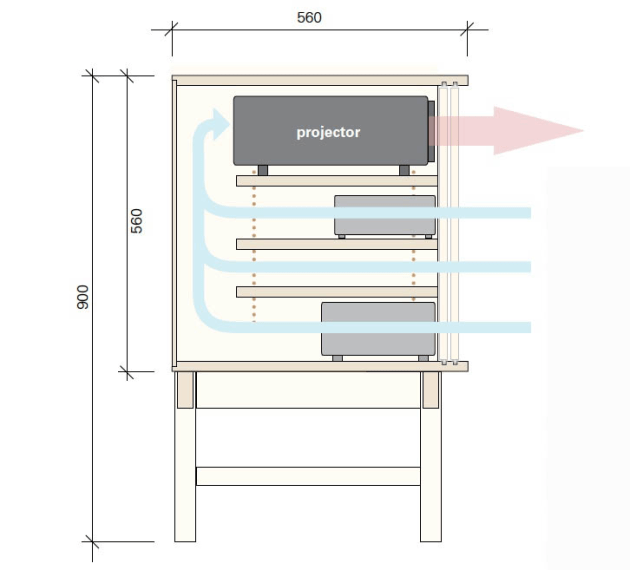 The many virtual proposals I drew up on my computer didn’t convince me that the proportions were like those of the Danish sideboards I had in mind, so I decided to make a scale model from balsa wood. 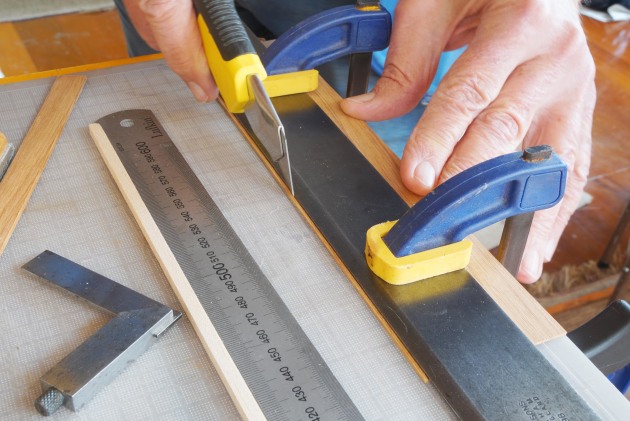 At the art suppliers I discovered rimu especially for model making in similar sizes and forms to balsa. Harder than balsa, this was ideal and I would have liked to have made the full size version from rimu. 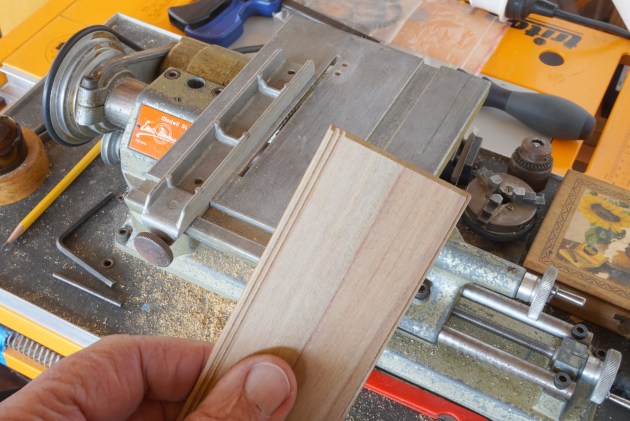 At 1:10 scale the model I made is 240 x 56 x 56mm and 90mm high with 2mm thick top and sides and 1mm thick doors. I have a small Emco Unimat lathe which has a sawing attachment with a 1.6mm kerf blade (photo 1) and used this to cut rebates for the sliding doors and back panel (photo 2). 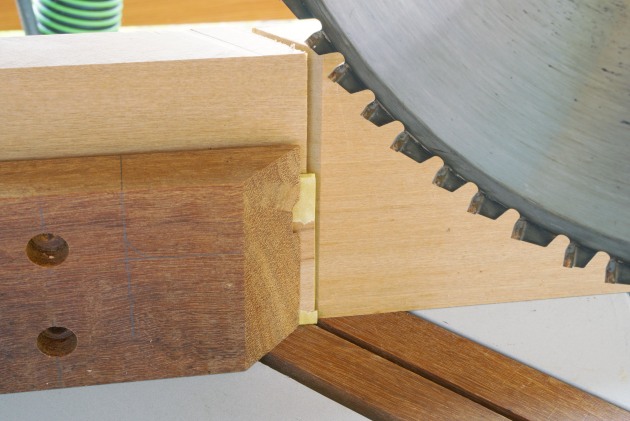 My sliding mitre saw fitted with zero clearance supports cut the mitres perfectly after first taping the edges and back of the rimu (photo 3). 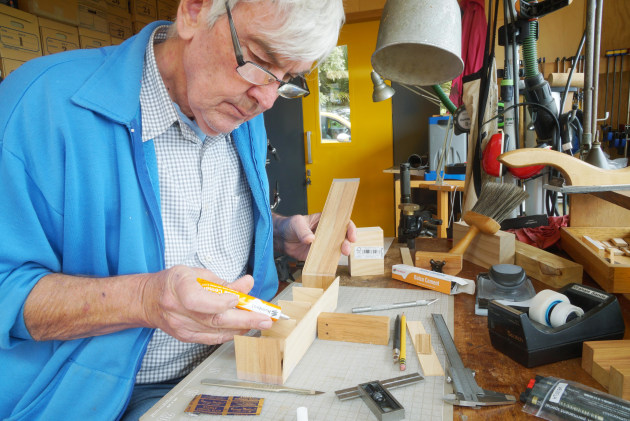 The top and sides were assembled with the wrap-around technique using sticky tape and balsa cement (photo 4). 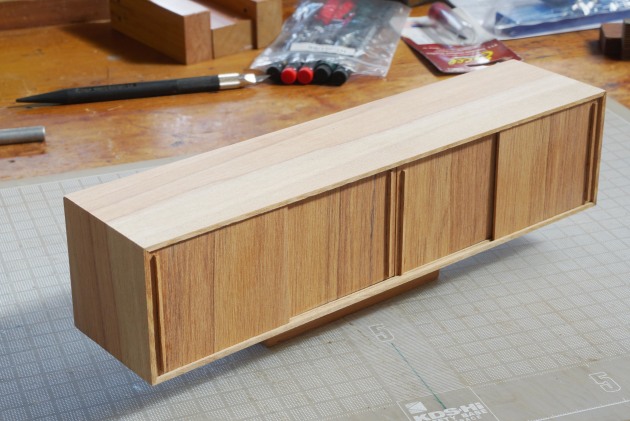 The model initially had four doors with vertical grain, like most sideboards I have seen (photo 5). Later I made the two door set with horizontal grain which represents the final design. This was more in keeping with my ‘less is more’ design intention, less destructive of the long Huon pine veneers I wanted to use, and less work. The model was an invaluable prototype and fun to make – I used to enjoy making model aeroplanes as a boy. 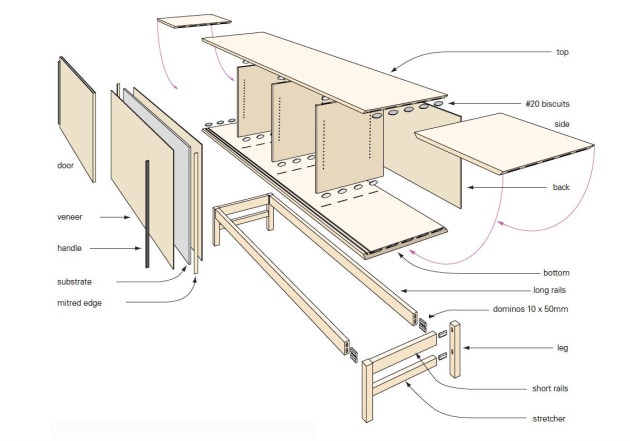 Fig.2 Carcase and base construction (mm), not to scale.

Normally the carcase of a sideboard such as this would be made from veneered ply or particleboard with teak or rosewood veneer. For the grain to flow over the top and sides 3600mm lengths of veneer would have been required, so I chose to go with solid timber. I have used Fijian kauri on several projects as it is readily available and in this case it complemented the Huon pine. Four 3600mm lengths of 140 x 19mm were enough for the top and sides, and shorter lengths for the bottom and three divisions. 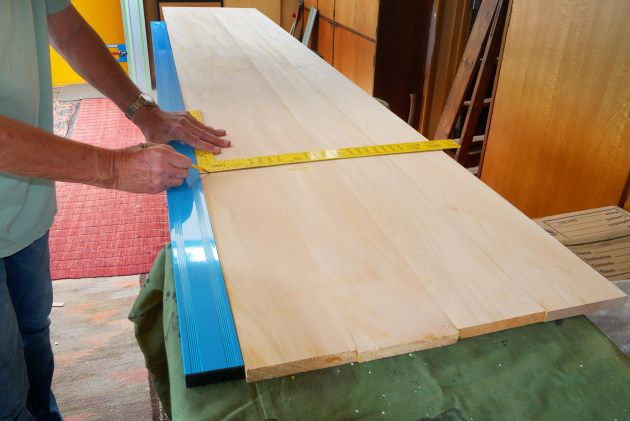 I bought a new 2400mm straightedge to help glue up the panels. This was done one board at a time, opposing the curvature of the boards to keep everything straight. The straightedge was also used to mark 90° cut-lines relative to the top length for the two top mitres (photo 6). 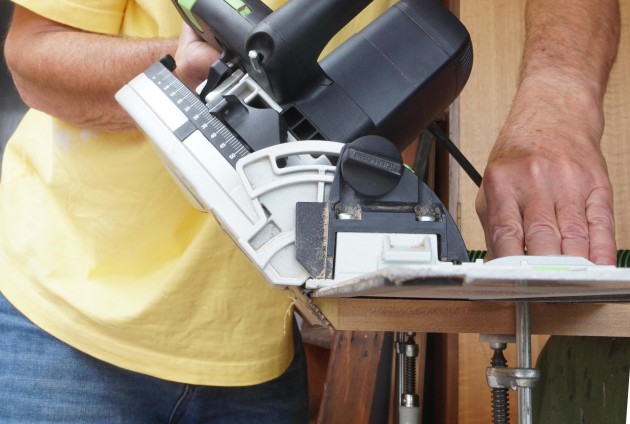 If I was keen, I could have used a Japanese saw to separate the top from the sides so minimal grain would be lost, however my track saw gave a clean straight edge losing only 2.5mm. The mitres were also cut with the track saw after a test joint using off-cuts allowed me to make fine adjustments to the blade angle to achieve an exact 90° joint (photo 7). Great care was taken to avoid any twisting, which would jeopardise the doors running smoothly. 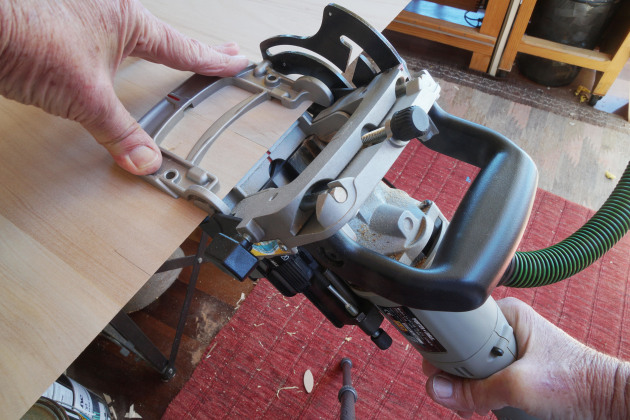 The mitre joints and the internal vertical divider joints were made using size 20 biscuits. My biscuit joiner is quite good for this as it references to the apex of the mitre joint, although I’m sure joiners which reference to the inside will work just as well (photo 8). 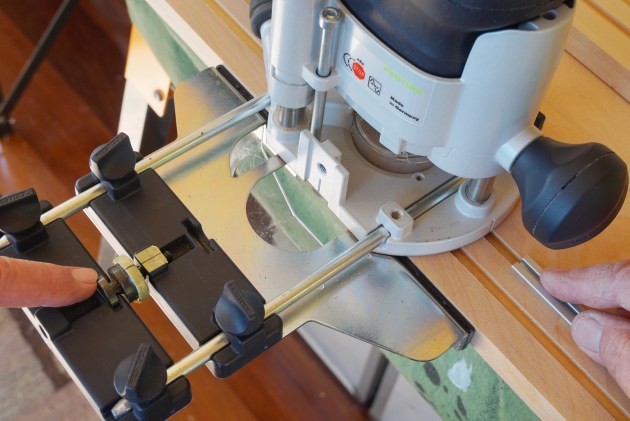 The sliding doors I have seen while browsing sideboards use proprietary track systems rather than just rebates so the top and bottom were accordingly routed for tracks. Two passes each with fine adjustment achieved the 7mm wide rebates required for Hettich Slideline aluminium track (photo 9). A 9 x 9mm rebate was also routed for a 9mm plywood back panel with a cable access port to be screw fixed.

The inside of the two sides and the three internal vertical dividers had 5mm diameter holes drilled for shelf supports at 15mm vertical centres for the projector and audio equipment compartment, and 20mm for the others. 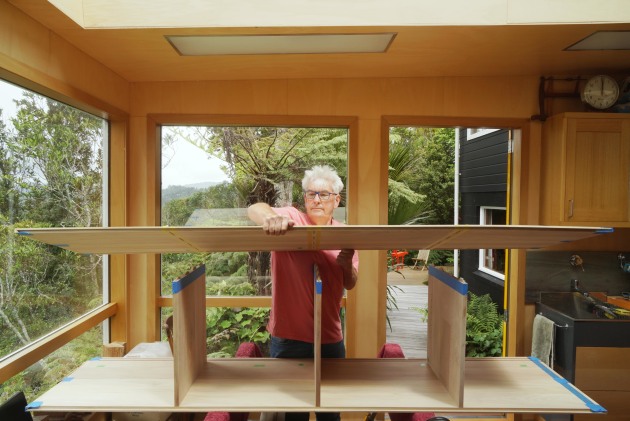 The dividers were then glued in one at a time upside down to the top. The joints were masked so glue didn’t squeeze out into the corners, which is difficult to clean up. The bottom was then glued to the three divisions (photo 10). 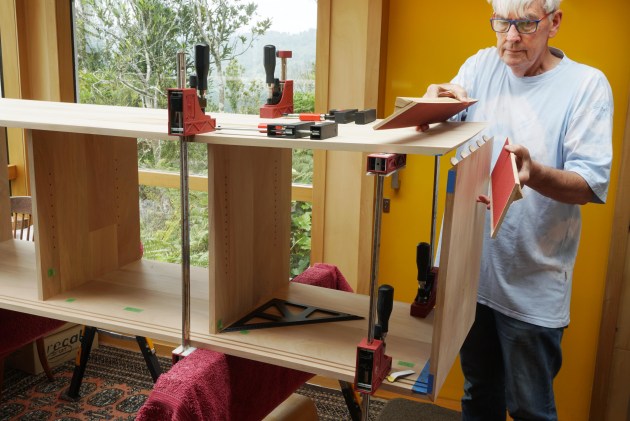 For the mitred corners I made clamping cauls with sandpaper glued on each face in order to apply pressure at 90° to the centre of the mitre joint. The joints were held apart with clamps in spreader mode whilst I also clamped the dividers so as not to stress their newly made joints (photo 11). 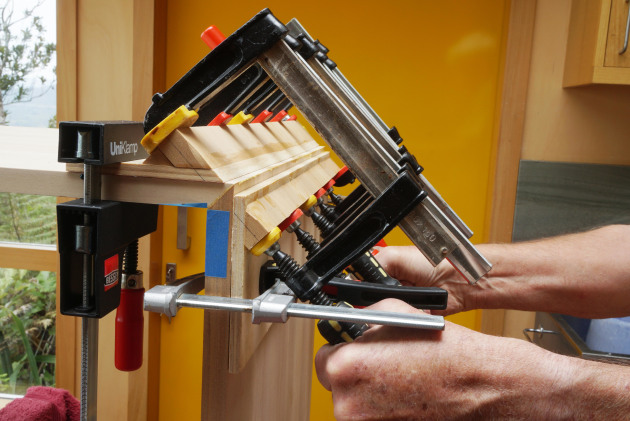 The cauls worked brilliantly, it was great to see the mitre come tightly together with pressure from the row of six clamps (photo 12).

The new 2400mm straightedge kept the top and bottom of the cabinet front within a 1mm vertical tolerance for the sliding doors which each travel 1200mm. The support frame was made from kauri using 10 x 50mm dominos (fig.2). Before the doors could be made the tracks needed to be fitted, and that was next done after finish was applied.

After much deliberation while sliding, flipping and rotating, I decided to slipmatch sequential pairs of veneers vertically to bookmatch the doors. The veneers couldn’t be bookmatched vertically because there were only three per door (uneven amount). 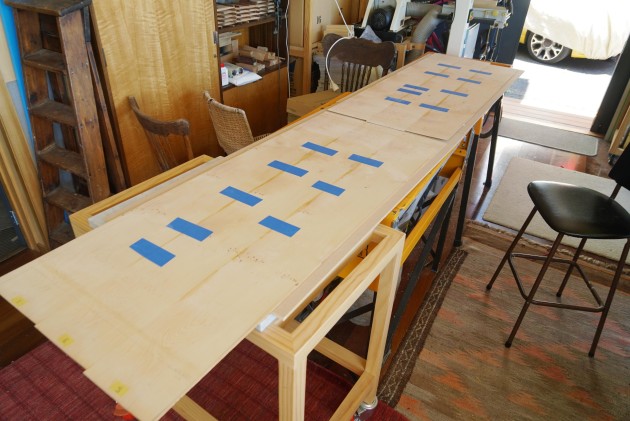 After determining the door sizes the three veneers were trimmed to size, then jointed and glue applied to edges before pulling them together with tape (photo 13).

I didn’t want to use vertical edge strips on the door sides as this would visually interrupt the bookmatch and detract from the doors being a unitary panel within the surrounding mitred carcase. Instead the veneers were mitred and wrapped around the end of each door which meant trimming off the portions to be mitred before pressing. 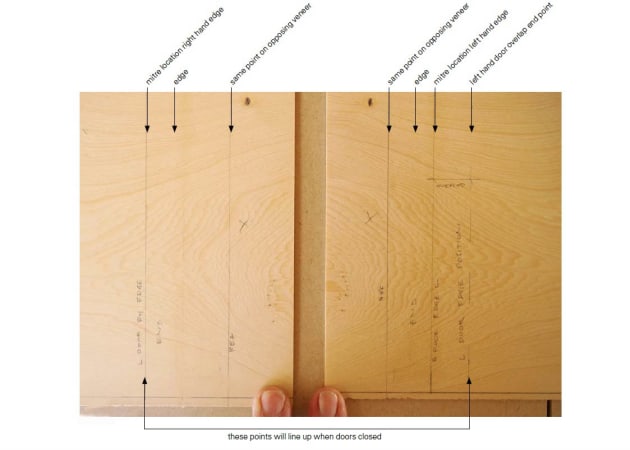 The tricky part was calculating where to cut the veneers for mitres at the door overlap so the ‘spine’ of the bookmatch was at the right end of the left door (photo 14). The clearer grain pattern would go at the overlap and the other ends were then marked. The edge pieces to be mitred were taped to prevent breaking, then sawn off and carefully set aside.

The 3mm veneers were then pressed on 9mm MDF with a similar veneer on the back. I used epoxy resin and the press I made for my coffee table in AWR#95. 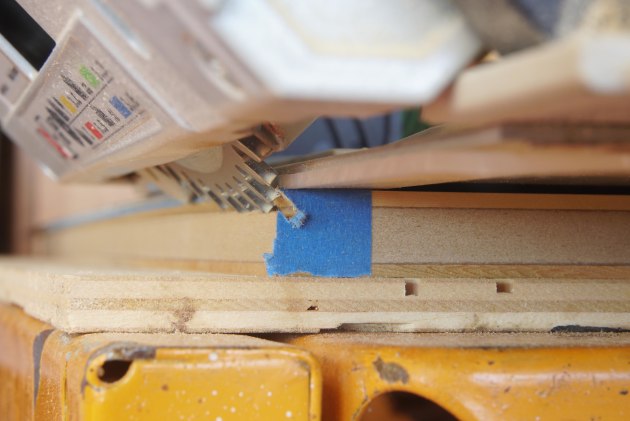 The doors were trimmed to final size before cutting the mitres through the veneers only (photo 15). 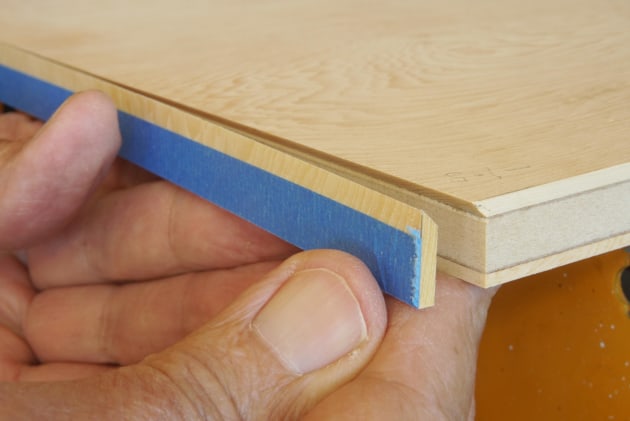 The doors were then turned over and the track saw used again to rebate under the mitre for the thickness of the mitred edge piece (photo 16). The door handles are 5 x 12mm lengths of ebony screwed on from behind. 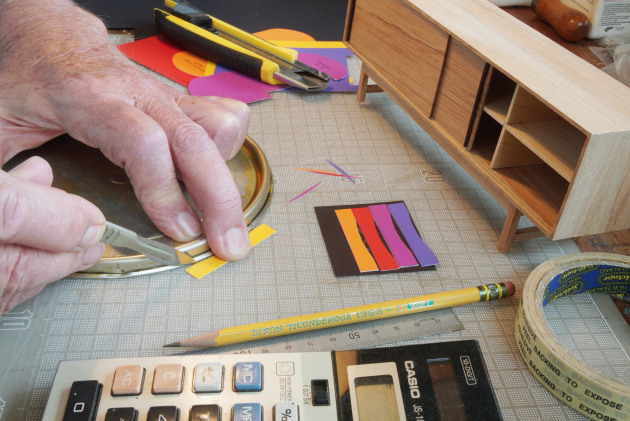 One of the leading figures in the creation of Danish design in the 1940s was Finn Juhl, introducing Danish Modern to the world. His sideboard of 1955 featured drawer fronts using a portion of the ‘colour wheel’ with cut-away pulls. Midway through making the sideboard I modified my model using a similar approach (photo 17). 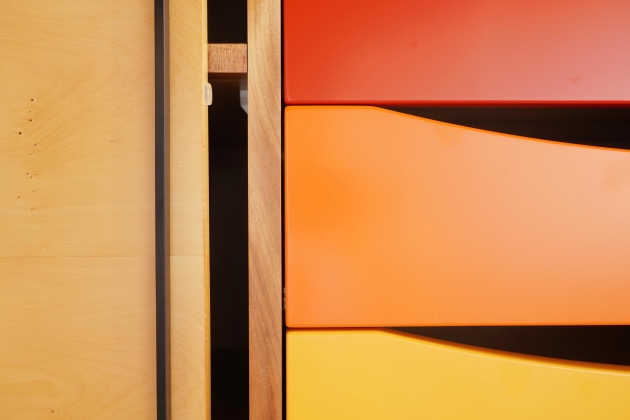 Keith Wallace does my finishing and recommended using MDF and fine sanding the edges. By matching the colours to paint charts the finish he produced on the final project was superb (photo 18). 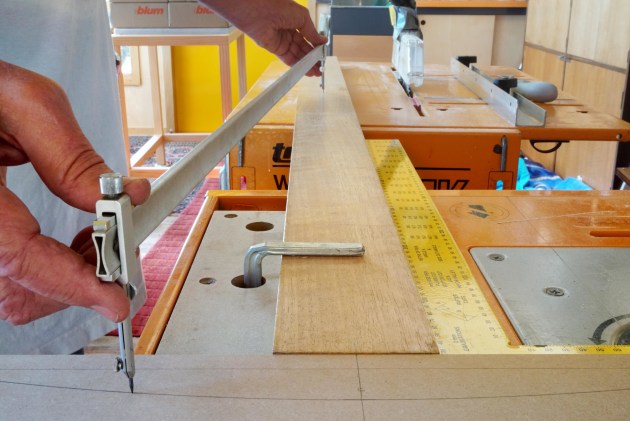 A metre long beam compass was used to scribe an arc on the drawer front template but you could also use wire a nail and pencil (photo 19). 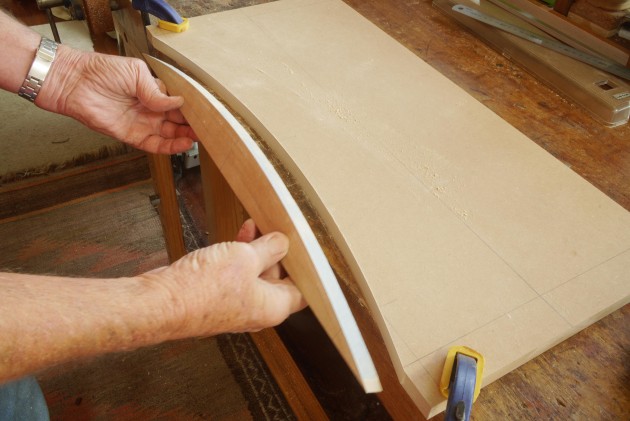 The template was bandsawn and the off-cut used as a sanding form to smooth the template arc surface for the bearing guided router bit to follow (photo 20). 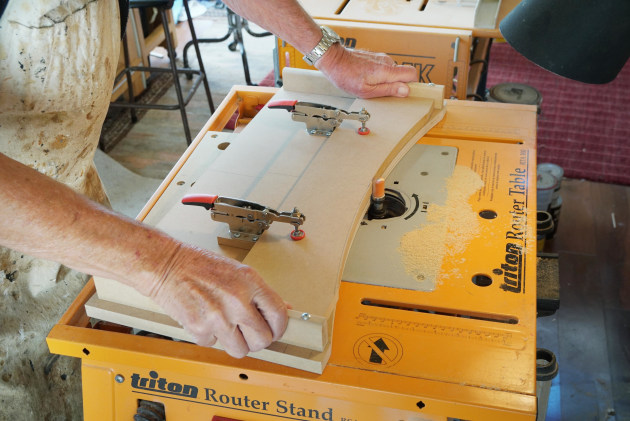 Next came the process I have often seen in woodworking magazines and always wanted to try, making a jig with toggle clamps for use on the router table (photo 21). The MDF fronts were trimmed close to the line before routing smooth and the edges then rounded over with a 3mm radius router bit. 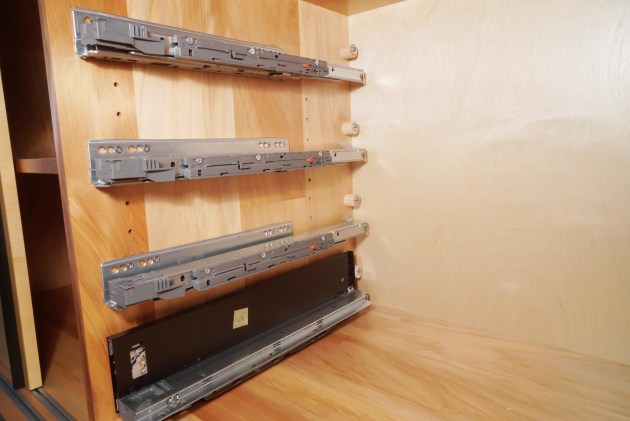 The drawers were an after-thought, so I used Blum Tandembox sides and runners. These could be easily installed in a compartment originally intended for an adjustable shelf (photo 22). More importantly the drawer fronts are detachable (for colour paint) and can be finely adjusted vertically and horizontally after installation. I can replace them at any time with kauri if I desire. The drawer bases and backs (and shelves) are 16mm custom kauri veneered plywood with solid kauri edge strips fitted with biscuits.

The end result was worth all the model making and time spent arranging veneers. Likewise adding a splash of colour to the interior has given us a lot of pleasure – every time the doors are slid it’s like opening a new packet of coloured artist’s pastels.

See a later three-door version of this sideboard recently made in teak by the author.