Safer on your mitre saw

Many woodworkers, including numerous tradespeople, are unaware of some of the serious injuries that can be caused by the mitre saw. On countless videos shared on social media, operators are seen risking themselves by holding a piece with their bare hand close to the spinning blade. One study of the statistics kept by the National Electronic Injury Surveillance System put the mitre saw second only to the tablesaw as causing the greatest number of accidents – estimated at 6,800 a year in the US alone. The mitre saw is often incorrectly perceived by uninformed users as a safe machine.

At the other extreme, some woodworkers – keenly aware of the design limitations of the mitre saw, or haunted by the memory of launching small projectiles across their shops – avoid using the mitre saw entirely for any small work. They are, of course, failing to take advantage of the full potential of their saws.

While some cross-cuts should indeed be made with a different machine or by hand, I use the mitre saw for both breaking down large stock and trimming small or narrow pieces on a regular basis – without jeopardising my safety. I will share four jigs that I use to handle thin or tiny work with the mitre saw. You will just need some scrap wood and a few pieces of hardware to employ these methods. 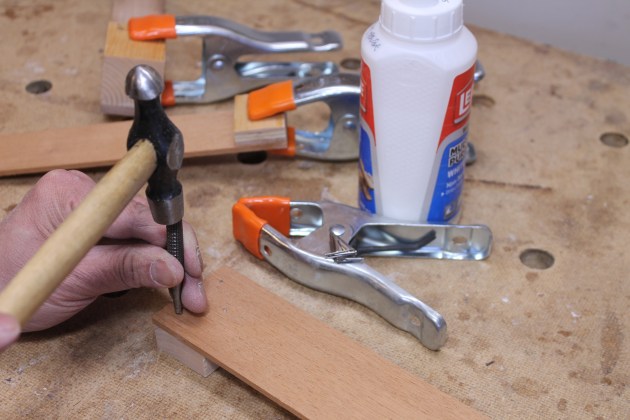 To avoid placing my fingers too close to the blade when holding shorter pieces on the mitre saw I made several small parts hold- downs, consisting of strips glued and nailed to a riser block of different thicknesses (photo 1). 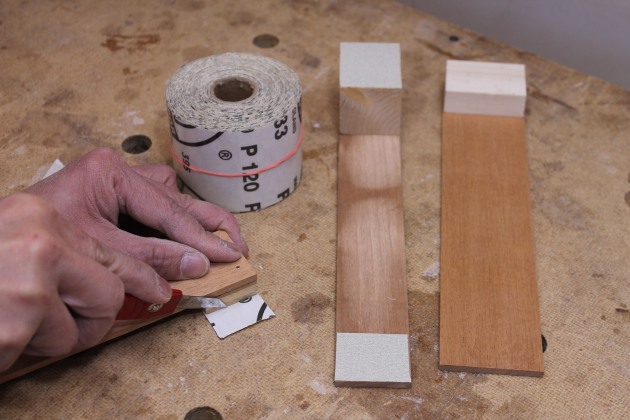 To maximise stability, sandpaper is glued to the undersides of the riser block and strip end (photo 2). The suggested dimensions of the hold-downs are given in fig.1.

In use, choose the hold-down suitable for the thickness of the work, and press down the strip in the middle with the saw’s clamp (see below photo 3). 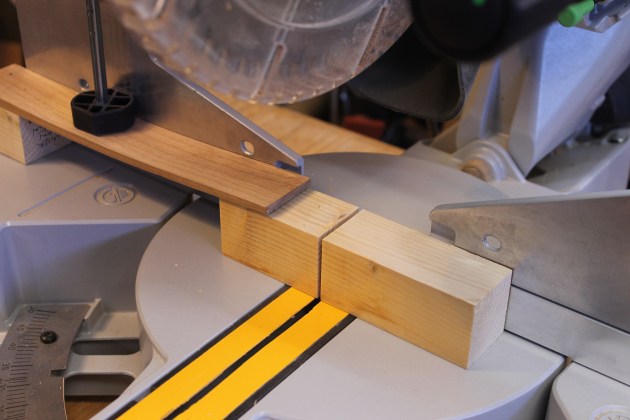 The strip acts as a bridge, providing downward pressure from the saw’s clamp on the small work. 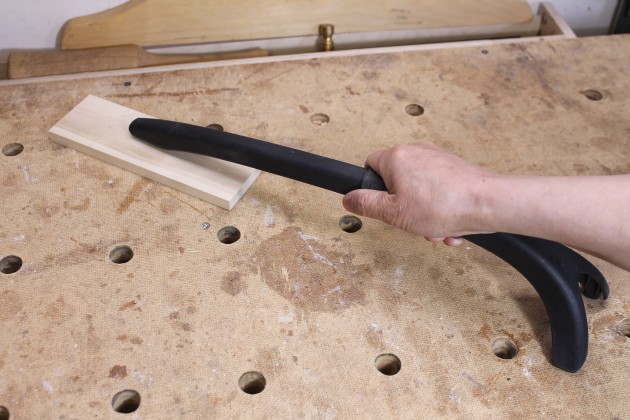 You can also make a hand-held version of this hold-down by replacing the strip with a beam, about 20mm x 40mm wide x 500mm long. Photo 4 above shows a commercial version of a hand-held hold-down. 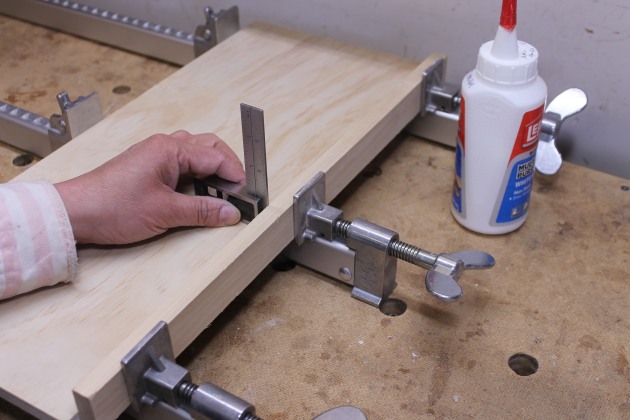 Some narrow pieces such as muntins and decorative beads are harder to hold securely on the saw table, and when not supported on both sides of the fence, tear-out from the cuts is also common. To handle such cuts, I made an L-shaped zero-clearance cutting jig which consists of a fence and a platform glued together at a right angle (photo 5). 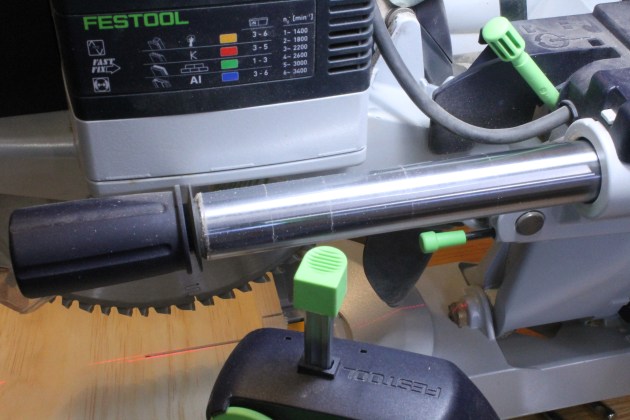 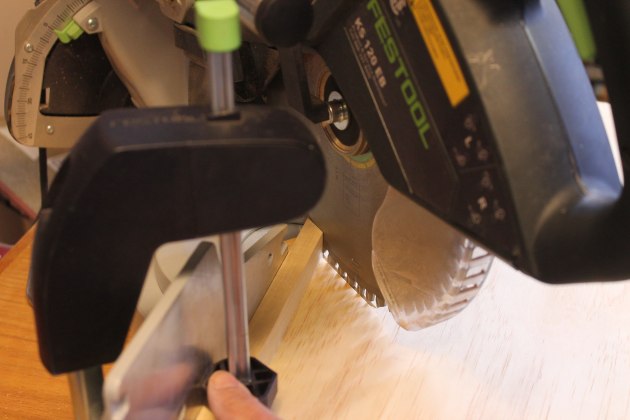 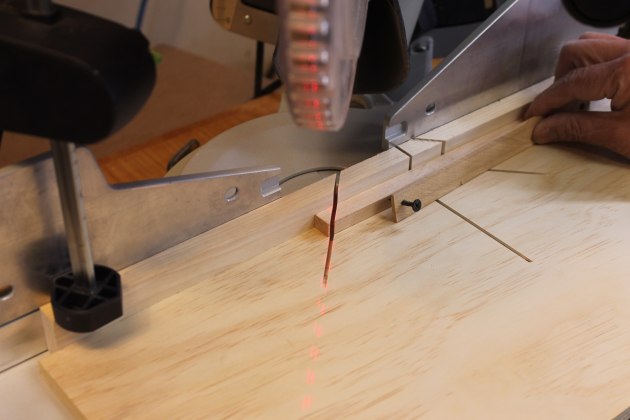 Once the jig is zeroed out and secured at the desired angle, cuts will be made dead-on and tear-out free (photo 8). A pinch stick is used when the work is too short to hold safely with the bare hand. 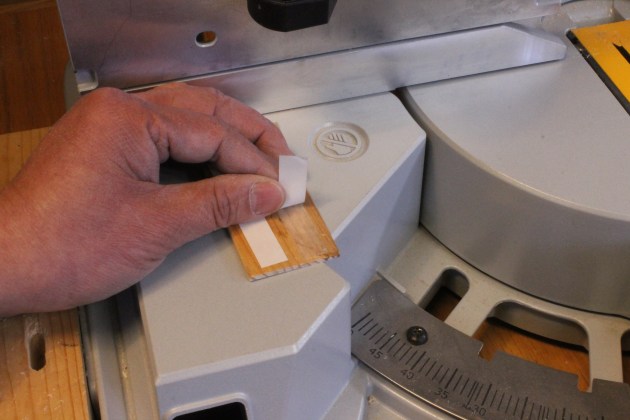 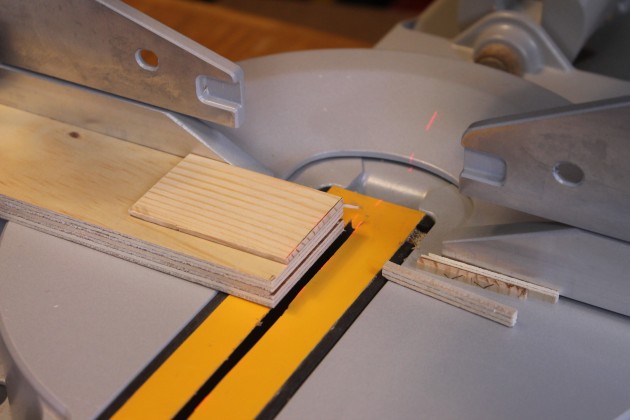 When a piece is too thin to hold down with any clamp or fixture, British cabinetmaker Peter Millard has a simple solution: he tapes the thin piece on a sacrificial board, and cuts the piece as a stack (photos 9, 10). For small and thin pieces, use a double-sided tape of light bonding strength. By extension, we can use this approach to attach something small to a sacrificial piece with CA glue, and trim off the waste. 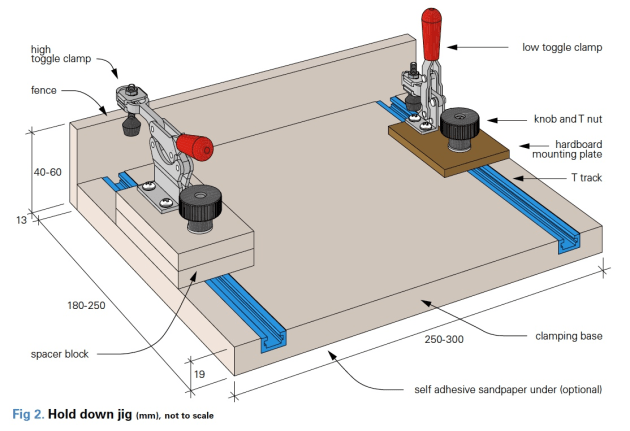 What if a piece is too short or small even for the small parts hold-down to handle? I borrowed the idea of the holding jig used for routing small parts, and came up with a version for the mitre saw: a toggle clamp holding jig (fig.2). The jig consists of three main parts: the base with a right-angle fence, two T-tracks, and two small toggle clamps that run on the tracks. With the two toggle clamps, the jig can be used on either side of the blade. 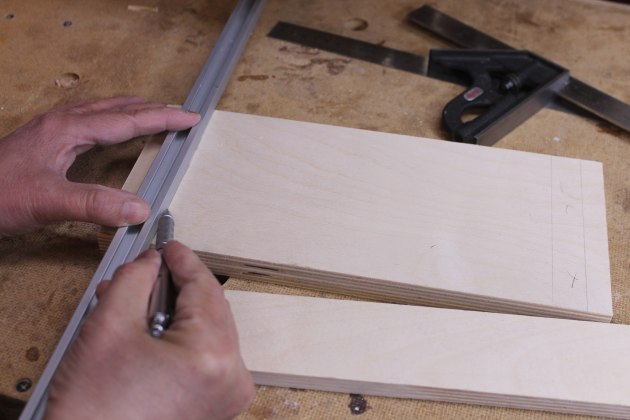 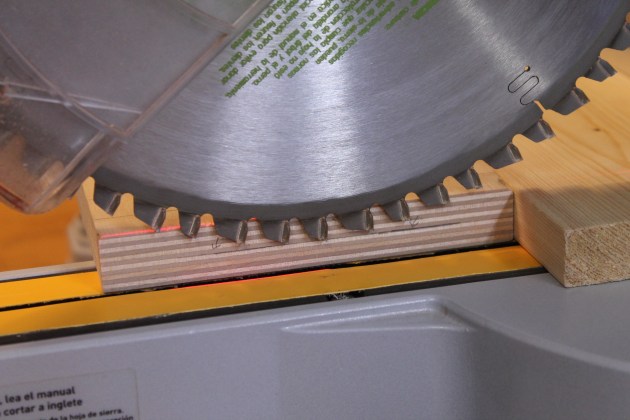 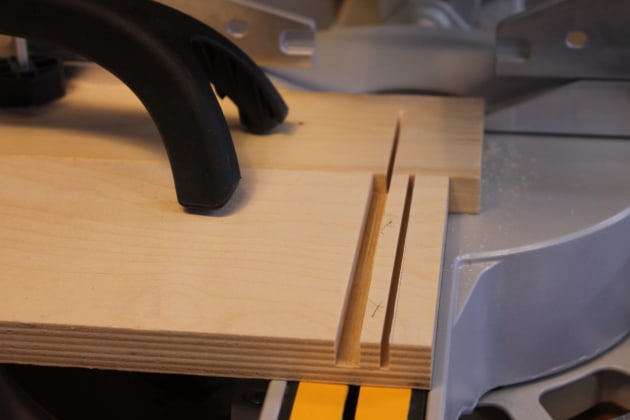 To make the jig, start with marking out and cutting the dados on the base to the thickness of the T-tracks or slightly deeper (photos 11, 12, 13). 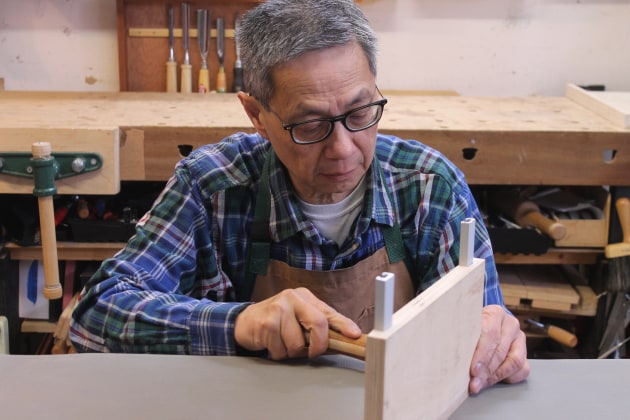 Add a fence to the base and install the tracks in place (photo 14). 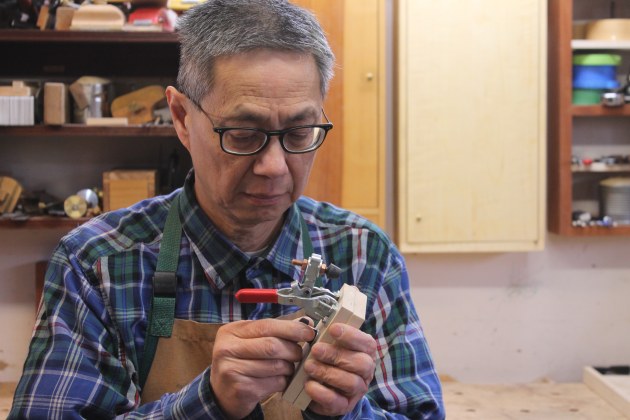 Screw the toggle clamps to blocks that act as the mounting plates, and feed the plates into the T-tracks (photo 15). 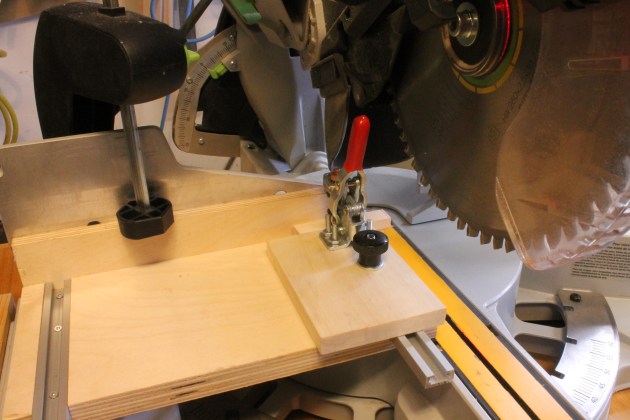 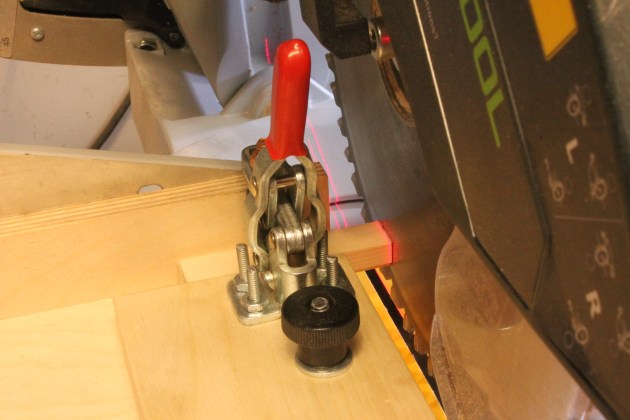 In use, the holding jig is clamped to the mitre saw table while the work is held under one of the toggle clamps (photos 16, 17).

With these shop-made fixtures, not only can you keep your fingers out of harm’s way, but you can also get better cutting results from your saw that are tear-out-free and precise. And it is an ideal weekend project to make those jigs when you need a bit of a break from your usual furniture builds!