Creations of Nature was the title of an exhibition of Silvio Apponyi's work which ran at Bungendore Wood Works Gallery in 2006. Evan Dunstone wrote about the work featured in a review which ran in issue 52 of Australian Wood Review. Yesterday, June 8, 2020 many applauded as Silvio Apponyi received a Medal of the Order of Australia award in the Queen’s Birthday Honours for services to the visual arts as a sculptor.

Woodworkers have a tendency to view the work of others through the lens of their own knowledge. Enjoyment can be constrained by our self-conscious knowledge of technique so that we can miss the holistic effect of a work.

Very occasionally we come across work that is so fresh and free of technique that it returns us to the wide-eyed innocent. The sculpture of Silvio Apponyi is such work. He leaps in scale from larger than life to the most delicate netsuke. He is comfortable with wood, stone or bronze. He can work in stylised abstract or stark literal realism. He is, in short, (and I shudder at the overused cliché even as I write) a master of his craft. 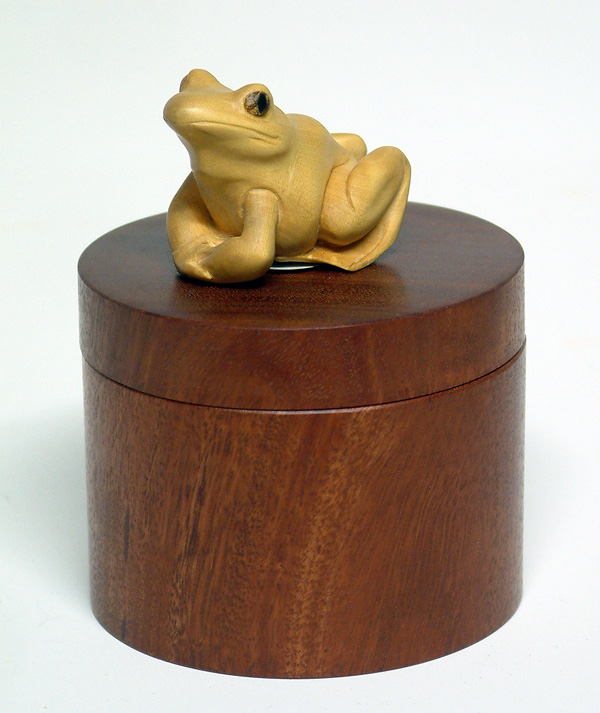 An exhibition of Silvio’s work was held at Bungendore Wood Works Gallery from March to June this year. The first impression on walking through the doors is the luxuriant volume of work on display. This was not some mean little exhibition of a few good pieces with a lot of ‘padding’ around the edges to make up the numbers. This was an anthology of work representing Silvio’s many different styles of carving in wood and stone (his bronzes are all based on original woodcarvings). The unifying theme was the subject matter, as all the works were based on Australian native animals.

Apponyi’s largest and most imposing pieces are in stone. Sleepy Lizard (a slightly greater than life-size shingleback on a rock) is an exploration of texture; the roughly worked knobbly scales of the lizard beg to be stroked. By contrast, the highly polished and crisp Python relied on the natural pattern in the stone to evoke the pattern of the snake’s skin. Apponyi’s Goanna looked ready to leap off the rock on which it perched and power its way up the length of the gallery. Counter-intuitively, I responded better to Apponyi’s large stone reptiles than to his mammals, such as Sealion. Perhaps the cold austerity of the material better suited the reptile form? 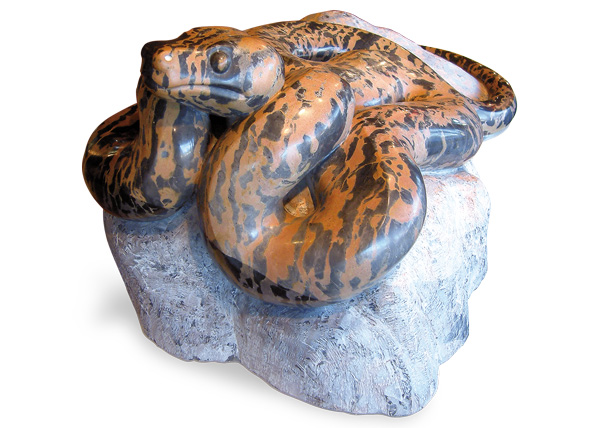 The most endearing work (and the most popular) are Apponyi’s netsuke. Perhaps it would be more accurate to say netsuke-like forms, as Silvio is not interested in the original function of netsuke, nor restricted by the traditional Japanese conventions around abstraction and proportion. Apponyi carves theses pieces on a small scale (typically around 50mm cubed) with incredible attention to detail. Experience has informed him what details to include and what to imply, but the subjects are all anatomically correct and to scale. He may give his subjects a whimsical pose, but not a false proportion.

My favourite of the netsuke-like pieces was Meerkats in English box and buffalo horn. A male and a female meerkat are alert to danger with a tense mix of curiosity and caution. To give a carving the size of a 50c piece such intensity is remarkable. The pale boxwood shows fine details without having a distinct character of its own, so there are no games with grain or colour here. Meerkats relies on the carver’s understanding of hisvsubject and his ability for detail.

The originals of the small work each came with a turned lidded container in redgum, a detail of the exhibition that I greatly appreciated. The precious jewel-like nature of the pieces was enhanced by having these sweet boxes to contain them. The simple practicality of transporting such a valuable and delicate piece was resolved. 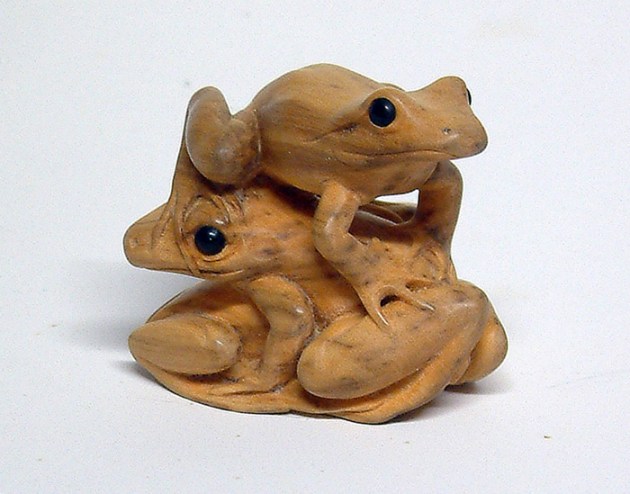 Many of the netsuke-like forms have been reproduced as bronze casts using a lost wax technique. The quality of the casting is superb. I suspect I would have enjoyed the small bronzes more had I not seen the originals in wood. In fact none of the bronzes on offer were reproductions of the displayed woodcarvings; rather they were of previous work. I confess I treated the bronzes like a portfolio of past work and tried to imagine the originals in boxwood. Naturally, the bronzes were significantly less expensive than the originals (roughly one sixth the price) and were a way for people of modest means (such as myself) to acquire some of Silvio’s work. 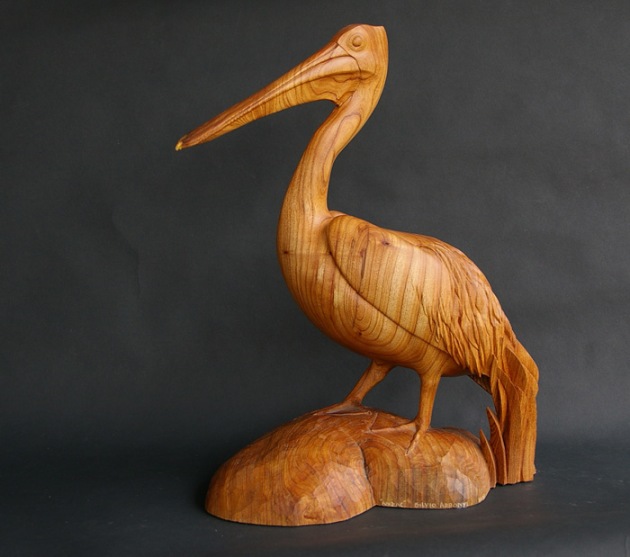 The large woodcarvings have a quite different energy to them than their smaller cousins. Apponyi tends toward super-realism and injects less humour into the pieces. He plays games with texture and grain in a way more reminiscent of his stone works than his small boxwood works. The most interesting of the large wood sculptures was his Bilby in red cedar. It was crisp in its detailing, warm and appealing. The grain and colour of the cedar complemented the subject and design. I confess I found myself focusing too much and too early on technique, wondering how he did this or that while the smaller pieces held my delight for longer.

Unlike the small work, of the larger sculptures there was a timber original and a bronze cast on offer; White Cedar Pelican sat on a plinth next to its bronze reproduction. I was interested to see how the grain in the cedar affected the composition and compare it to the bronze. The bronze cast carried all the fine carved details but not the texture of the wood grain. I assume this was deliberately polished out as the wood grain would only have confused the piece. To my surprise, in this instance I was more attracted to the bronze than the timber original.

Full marks to Bungendore Wood Works Gallery for presenting the exhibition in such a powerful and professional way. The display cases used for the small work were made several years ago by renowned clockmaker Will Matthysen. It is pleasing to see finely crafted work displayed in finely crafted display cases. The subtext of such a comprehensive exhibition is the strong relationship built up by the gallery with the artist over many years.