Inside a High Wycombe furniture factory, around 1900.

Originating in rural England, the Windsor chair can trace its history back to the first half of the 18th century. Like the Victorian balloon back, Chippendale’s thirteen pane glazed door and the cabriole leg; the Windsor chair has become deeply entrenched in our furniture culture. The reason for their name has been lost in history, but many people will be familiar with the style. 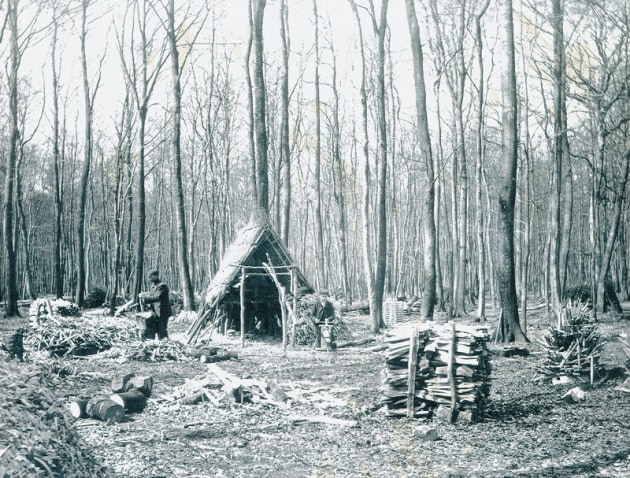 Bodgers camp in the Chiltern Hills outside High Wycombe. Every stage of chair leg turning can be seen in this shot from cross cut logs in the fore-ground to the finished legs stacked to the right behind the hut.

Production of these chairs was centred in and around High Wycombe, around halfway between London and Oxford. There were a number of reasons for a furniture industry to develop there. The town was (and still is) on a major transport link between London and the west of England allowing easy access to markets in those difficult days of goods distribution.

A more important reason was that the timber from which the chairs were made, grew plentifully in the surrounding hills. By 1877, there were almost a hundred factories in High Wycombe producing around 4700 chairs per day, supplying most of the common seating needs for the southern half of England. 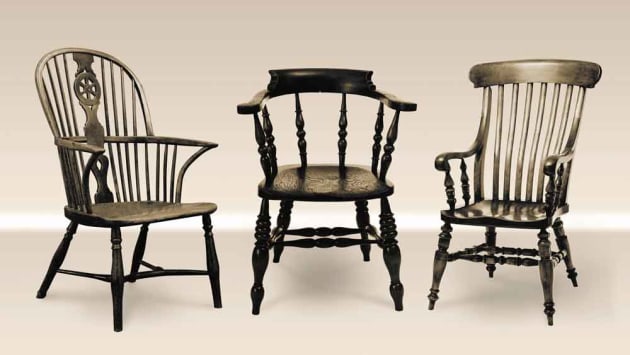 Windsor chairs: Wheel back, smokers bow and lath back reproduction (made by the author). The original made in 1890 was a marriage chair — there was a custom in the High Wycombe factories that when one of the workers was married he was allowed to make himself a chair at the company’s expense.

The defining quality of a Windsor chair is the solid timber seat from which the leg and back assemblies protrude. A variety of designs developed, such as the lath back, wheel back, comb back, Gothic, smokers bow and double bow. Reliable adhesives for joining seats did not exist at that time, so the seat was made from elm, a tree which grows large enough to supply the wide boards needed. Ash and yew were the preferred timbers for bentwood components, due to their good steambending characteristics. Beech and other species were used for the remaining components. 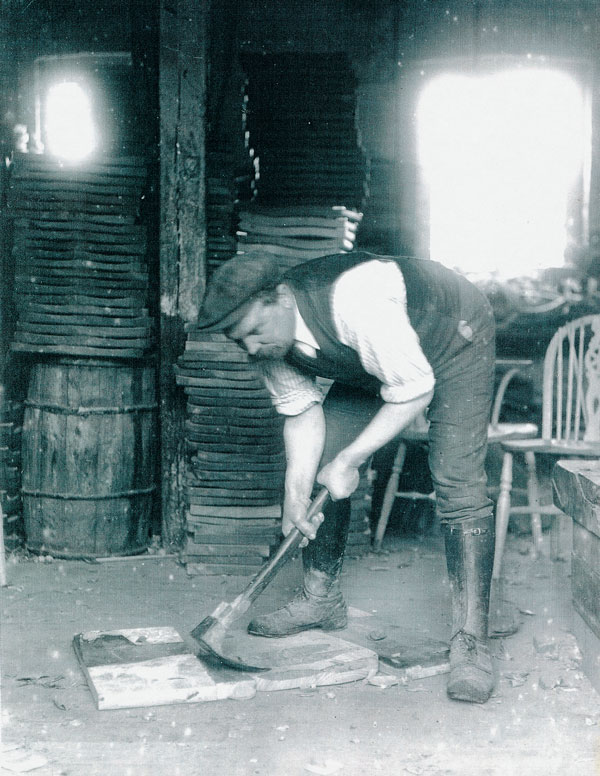 Arguably, the most famous group of people involved in the manufacture of these chairs were the bodgers who produced the turned components. Timber was sold standing at auction and felled by the vendor the winter before the bodgers moved in. First the logs were cross cut, then split apart with an iron wedge and a heavy mallet known as a beetle.

Rough shaping was carried out with a hand axe ground on one side, and the turning blanks were finally shaped on a shave horse with a drawer knife before mounting on the pole lathe. The main uprights for the pole lathe were either posts driven into the ground or at least one of them a small tree cut off to the desired length for extra strength.

The pole was a larch sapling that had been peeled and seasoned. It was shaved on the underside to aid the springiness and mounted at an angle with the end of the pole above the lathe bed. A cord was tied between the sapling and the foot-operated treadle with a couple of turns around the workpiece mounted in the lathe. The turner was then able to carry out his work by operating the treadle and cutting the timber on the downward stroke. Legs and stretcher rails were turned in this fashion by bodgers either at a camp in the woods where the trees grew, or in sheds closer to their homes. 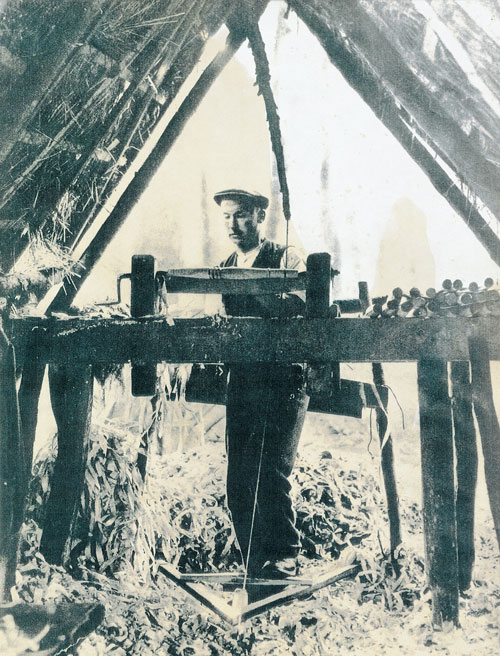 A bodger turns a chair leg on the pole lathe.

A foot treadle lathe was a popular alternative to the pole lathe. The parts were turned green and stacked to season before transporting to the factories for assembly. As a result, it is common to find that turned components on antique chairs are out-of-round due to uneven shrinkage during seasoning. Turnery was sold by the gross which consisted of 144 legs and 108 stretcher rails and a turner had to produce 2 gross per week to earn a living wage. In terms of a 40 hour week this would reduce manufacturing time to a staggering 3.8 minutes per piece. We can only assume that full advantage of the long English summer daylight hours was taken by the bodgers to turn their wares.

Alongside the bodgers in the woods were the pit sawyers. These men cut the boards for the chair seats (and other uses) over pits dug into the ground. The man in the pit, referred to as the ‘underdog’, provided power for the saw while the ‘top dog’ working above the log also provided power and was responsible for guiding the cut. 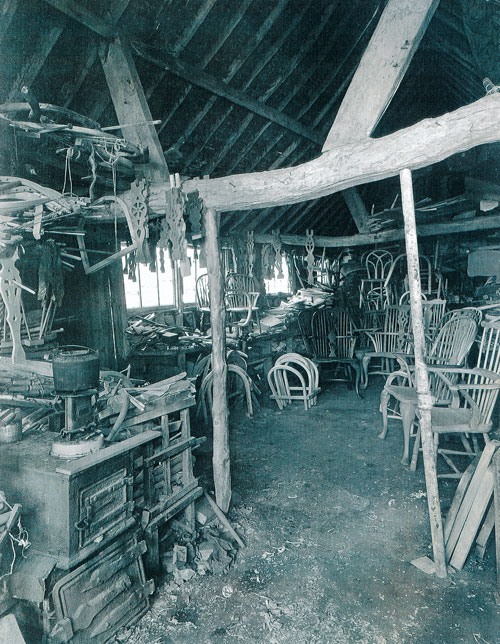 The component parts would be transported to High Wycombe for further processing, assembly and finishing in the ever-increasing numbers of factories in town. Seats were adzed, steam bent components were produced, other shaped parts were made, and the jointing was carried out. Assembly of a Windsor chair is a relatively straightforward process; the underframe is glued first in a single operation up to seat level. No clamping is required as the assembly is self-tightening and relies upon wedges, dowels or a simple friction fit for the strength of the joint. The back assembly follows a similar principle to the underframe, also utilising wedges and dowels to maintain the structure.

The finishing processes used on Windsor chairs were as varied as the chairs themselves, ranging from paint to no finish at all. An excellent description of finishing processes from another age is provided by J.C. Loudon in his ‘Encyclopedia of Cottage, Farm and Villa Architecture and Furniture’ first published in 1833: ‘These chairs are painted but more frequently stained with dilute sulphuric acid and logwood; or by repeatedly washing them over with alum water, which has some tartar in it; they should afterwards be washed over several times with an extract of Brazil wood. The colour given will be a sort of red, not unlike that of mahogany; and by afterwards oiling the chair and rubbing it well, and for a long time, with woolen cloths, the veins and shading of elm will be rendered conspicuous. Quicklime slaked in urine and laid on the wood while hot, will also stain it of a red colour; and this is said to be the general practice with Windsor chair manufacturers in the neighbourhood of London.’ 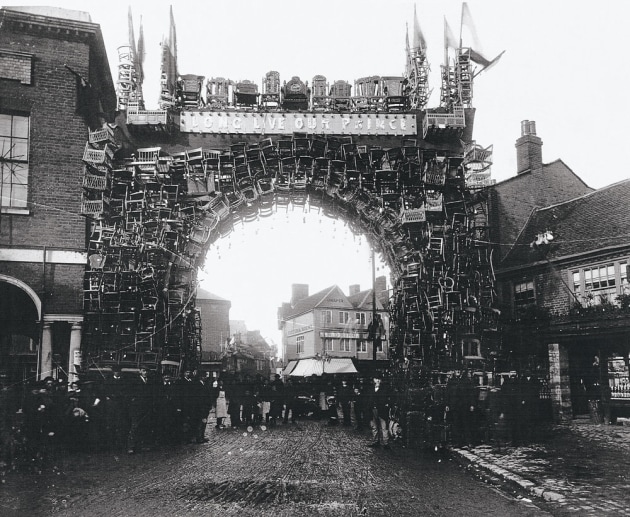 Chair arch built in the main street of High Wycombe in 1880 for a visit by the Prince of Wales, who was later to become King Edward VII.

A production process such as the one described, where component parts could be produced in isolation of each other with minimal equipment and then assembled in a variety of attractive designs, was bound to spread. Many of these chairs have been produced in North America where there are similar timber species and Windsor chair making spread to Australia as well.

In 1884 a chairmaker named George Peddle* migrated from High Wycombe to Tasmania. By 1890 he had established his own workshop and was producing Windsor chairs from Tasmanian blackwood for the waiting rooms of railway stations. In 1925 Peddle received a commemorative medal from the British Empire Exhibition in London.

Walk into any furniture shop today and you have a good chance of spotting a Windsor dining setting or the occasional arm chair, frequently with rockers. Many of these chairs are made in Asian factories and marketed under a variety of different names but there is no mistaking their heritage. It is a tribute to the people involved in the evolution of these timeless designs that they have penetrated the world’s furniture culture so deeply. Next time you are browsing at furniture and spot a chair with a solid timber seat and turned leg and back components, remember—it is the result of more than 250 years of development.

In "The Men Who Made The Celebrated Chairs" (Pagunta Press, 2016), Denis Lake charts the course of Windsor chairmaking in Tasmania. See www.woodreview.com.au/reviews/celebrated-chairs

Jonathan Chappell is a furniture maker who lives in Brisbane, find out more about him at www.jonathanchappell.com