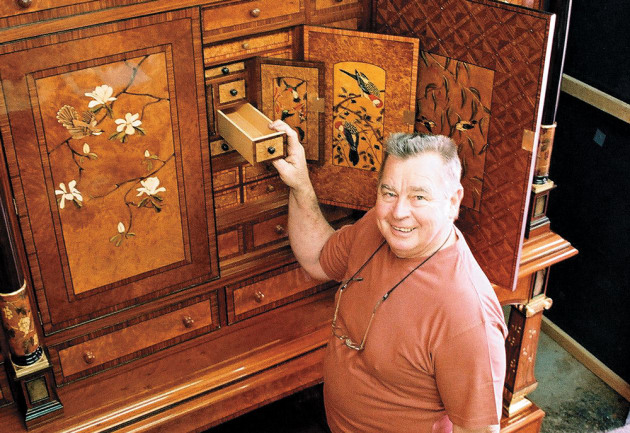 Above: Geoff Hannah with the Hannah Cabinet shortly after its completion in 2009.

When floodwaters rise in Lismore, NSW it’s been a practised routine for the mates of Geoff Hannah OAM to gather at his under-the-house workshop and help evacuate his machinery, tools and work-in-progress. Not so two days ago however, when the waters rose so swiftly that everything went under, machines, tools and all. So strong was the force of the floodwaters, that Geoff’s nearby outside timber storage, concrete slab and all, now resides in his back yard.

The Wilson River rose to 14.4 metres, two metres higher than record 1974 levels, catching people unawares, and leaving many stranded on roofs atop submerged houses and sheds. ‘The water was rising a metre an hour’, Geoff said, explaining how in the house above they had raised as much as they could off the floor. ‘Things started toppling off the tables and the water was nearly at my knees. Rhonda left earlier and it was up to my knees when I got out by boat.’

Geoff’s house is also home to an array of his exquisitely crafted furniture – now, with flood waters only just receding, it remains to be seen how much of it can be restored. Compounding the loss, his last large-scale masterpiece, the incredibly ornate Hannah Cabinet, built over a six year period, has also fallen victim to inundation at Lismore Regional Gallery where it has been housed since its $1 million crowd funded acquisition.

As waters recede and losses are assessed, only time will tell if the damage done to the cabinet and many of the other treasures at the gallery can be repaired. Geoff Hannah is not alone in the damage and loss that has befallen him, as there are sadly now many, many others who face hardship and loss.