Above: All these timber samples have the same weight but different densities. The longest sample is balsa wood.

Different woods vary greatly in their properties; some are soft (red cedar—Toona sp.), others hard (red mahogany Eucalyptus resinifera); some are heavy (red ironbark – E. sideroxylon), others are light; one wood is flexible (Corymbia maculata), another brittle (cypress pine – Callitris sp.); some woods are more hard-wearing or resistant to decay (forest redgum – Eucalyptus tereticornis) than others (Douglas fir – Pseudotsuga menziesii), while some give off more (bull oak—Allocasuarina leuhmannii) or less heat (Radiata pine) when they burn.

In earlier stories I described how wood structure affects both the appearance as well as the physical and mechanical behaviour of timber. Wood structure is determined by the cell: type, distribution, size and number and this can be used to explain many wood properties, but it is the thickness of the wood fibre walls that determines hardness and density.

The thicker the fibre wall, the harder and stronger wood turns out to be. For example, if we compare the density of balsa wood with jarrah using categories described previously, balsa is a 1-3 (160- 250kgm3) whereas jarrah is a 9 (800- 900kgm3). These timbers are at extreme ends of the range of density of commercial timbers – the bigger the number the higher the density. 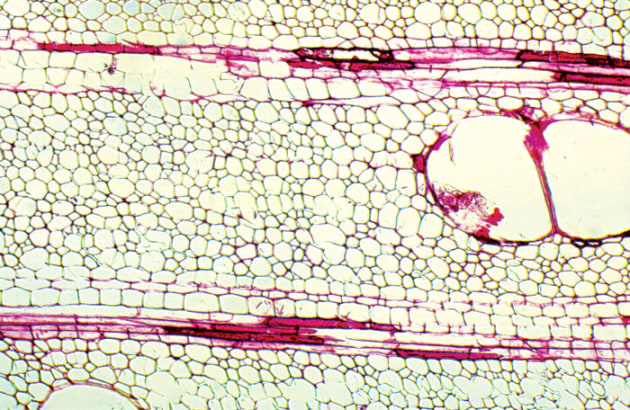 Cell wall thickness is a determinant of relative density. The thinner cell walls of balsa wood (above) result in its lower density than jarrah (below) with its much thicker fibres and copious amounts of extractives in cell lumens. Both images are from very thin slices of wood cut from the endgrain and stained. Scale: 30mm = 0.5mm. 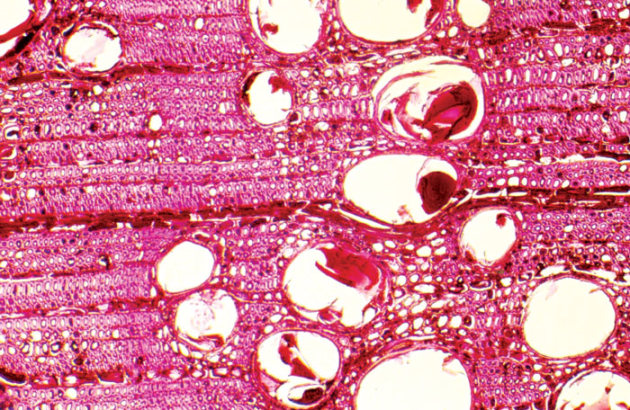 The difference in their cell wall thickness can be seen clearly from the appearance of their fibres seen in cross-section (see above). In one way or another, density is related to most of the physical and mechanical properties which makes it a very practical characteristic of wood that is easy to measure.

How do dense woods behave?

The denser the wood is, the stronger and harder it is. Density is related to ease of machining, and the wear of soft metal tools. Abrasion resistance increases with density. Screwing and nailing resistance are similarly affected. Nailing into dry messmate for example, is impossible without predrilling, whereas nailing the lighter pine is no problem.

Movement of wood due to moisture change is generally greater and more no- ticeable with denser woods. Gluing high density sheets or veneers from denser timbers is difficult and often cannot be done because of the high swelling pressure that develops upon application of aqueous glues.

To get a better appreciation of the origin and importance of density let’s look at the growth of the tree. Wood is a biological material derived from tissues made of cells which have cell walls composed of principally cellulose, other sugar-based compounds and lignin. In living trees, the fibres (tracheids) in softwoods are like pipes; they transport the sap along the stem and are filled by water. In hardwoods, the vessels fulfil that function and the fibres are also filled with water. In relation to wood movement, not only are the vessels and fibres filled with water but their cell walls also contain water. Another factor which affects the density is the amount of extraneous chemical compounds that are laid down in the lumen spaces and the cell wall. Typical examples of that can be seen in the heartwood of old pine trees or if we compare the sapwood and heartwood of e.g. jarrah. The coloured heartwood contains such extractives (photo 2).

The density of wood is an interesting property because it tells us how much carbon the tree allocates to stem construction (~50% of wood substance is made of the element carbon derived from CO2 from the atmosphere). Consequently as the tree develops, depending on species, it lays down layers of different amounts of tissue during rapid growth in spring and summer than at other times of the year. 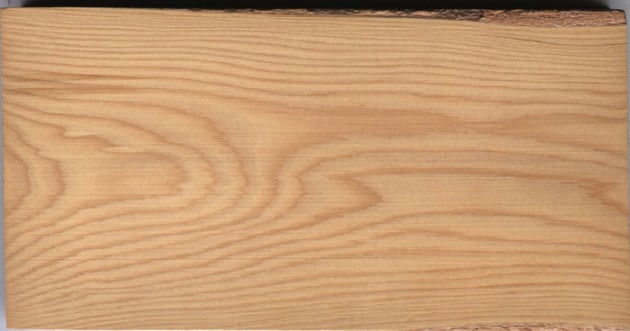 Accordingly wood density changes within the tree, during the life of the tree, between individuals and between species. Growth increments are prominent in trees grown in temperate regions, e.g. white fir (Abies concolor), so much so that the latewood can be two or more times as dense as the earlywood. Thus the density of the latewood zone of the growth ring to a large extent tends to govern the density of the growth ring. The figure resulting from growth rings varies according to the plane of wood which is exposed on the faces of boards.

The growth rings stand out to varying degrees resulting from growth intensity and consequently the density of the wood produced locally is not uniform throughout. This can often lead to surface cracks along growth ring boundaries when surfaces are finished with dark coloured paint. Likewise absorption of stains tends to be greater in low density woods and in earlywood zones compared to latewood.

On the other hand in woods grown in tropical or less temperate conditions, there is a tendency for ongoing growth to occur and correspondingly the density is much more uniform from point to point across the tree radius, e.g. brown pine (Podocarpus sp.), brushbox (Lophostemon sp.), merbau (Intsia sp.).

Sometimes the ‘weight’ of the wood is incorrectly referred to as density. Density is by definition proportional to the amount of substance relative to a given volume. When we refer to wood density, the value is derived from the mass of the wood block divided by its volume (of the block or sample in bulk) using standard- ised units of kilograms for mass and cubic metres for the volume.

Although wood density is observed to vary within and between trees and species, the density of cell wall substance is remarkably consistent at 1520kgm3. So why then is the density of balsa 160kgm-3 and jarrah 850kgm3 if their cell wall have identical densities? The key to it lies in the reference to ‘bulk’.

Wood fibres and other cells consist of a cell wall that has a central space (lumen). And even within the cell wall there are tiny capillary spaces usually containing water molecules and extractives. So if we were able to take a block of say air-dry wood and squeeze it to so hard so as to collapse the lumen spaces to eliminate all the capillary spaces within the cell walls, the resulting material would become solid wood substance with a density of 1520kgm3.

Reference to wood density in publications and tables is made to its bulk property and generally in the air-dry state, but to complicate matters, since wood can contain differing amounts of water depending on its moisture content (from green to air-dry to oven-dry), the amount of water present will have an effect on the volume of the piece, and the combined weight and volume change resulting from the presence of water will affect the density. To overcome this problem, different types of density are often used for convenience as in the table above).

A large number of commercial woods of Australia, volume for volume are lighter than water and would float, but a proportion of species such as the ironbarks, boxes and many gums sink in water where one cubic metre of the wood weighs more than 1000kgm3. In practice air-dry density is used most commonly because it is easy to measure as well as being of practical value.

The simplest way to measure density is to machine off a sample of known dimensions (length, width, and thickness) measure the weight. With smaller specimens measure the dimensions in cm and the weight in grams this gives the ratio of the mass to the volume. Using units of cm3 (cc) and grams that becomes grams/cc. Multiplying this by 1000 converts it to kgm3.

In the absence of a balance there is another neat way of measuring the density for woods that do not sink (In this case the specific gravity is determined).

Machine a long narrow wood sample (~20cm) and gently lower it vertically into a long container of water using a loose fitting wire loop until the sample stops sinking. Record the length of the sample from the water entry end to the top of the wet line.

Dr Jugo Ilic is a wood scientist and author of numerous publications on wood anatomy and identification, as well as a database of botanical and common names of world woods.