Above: Ross Annels (centre) and students work together to bend steamed timber around a form which it will then be secured in order to constrain the outside-face stretch. Photo: Linda Nathan

Wood is a complex material consisting of naturally produced compounds that include water, carbohydrates (cellulose and non-cellulosic) and aromatic compounds (lignin). These are organised as mostly long, slender, and hollow cells with tightly wound fibrils and fillers. For the most part, lignins cement the cells walls together but are also found within cell walls.

To get a straight piece of wood to remain bent you have to work in the ‘plastic’ range of its properties otherwise in its elastic range the bend will not remain permanent. Creep can occur after plasticity and before failure, and must be avoided as it may produce unacceptable fractures.

From left: Myrtle beech, southern sassafras and red tulip oak are noted as having excellent bending qualities. Visually it is not possible to predict how well a particular section of different woods might bend.

The simplest way to make tight bends is by plasticising the wood with steam at relatively high moisture. In the presence of moisture, the heat from steaming will soften the lignin and make the wood pliable. Just heating the timber with dry air is unsatisfactory because that will lower the moisture content (MC) and not plasticise the timber. (This is a similar requirement to timber reconditioning of collapse prone ash eucalypts.)

Considering the stress-strain behaviour of wood during softening, the response in compression within the plastic range is magnified and becomes large, up to 10x that in the dry range, while not affecting the tension properties.

Initially it may be thought that green wood might be easily softened with heat or steam, however as in drying, prolonged heating of green wood increases the drying rate, but reduces its strength markedly. Steaming time should be kept to a necessary minimum, even for dry wood.

Experience has shown in Australia1 and elsewhere that while air-dry timber (notionally 12%) can be used, the ‘goldilocks’ MC for softening timber for bending is approximately 20–25%. Consequently, moisture plays a key role in the ability of wood to be bent. It was noted that while some pines (Pinus) also bend well when softened green, this is however unsatisfactory for hardwoods, probably because the timber becomes more collapse and check prone on subsequent drying.

Kiln dried timber, unless dried aggressively, should also be no different from air-dried. Still, if the intent is to dry for bending, then kiln drying is an unnecessary step as the timber would need to be steamed for longer to raise its moisture content for optimal softening. Furthermore, the timber’s MC in the core should also be below fibre saturation point (FSP) otherwise severe internal and surface checking is likely to develop upon final drying.

A further point to consider is that air-dried species are prone to surface checking (as with for example messmate, karri and others of high density). Here the steaming used for softening tends to reopen otherwise closed surface checks which do not close after the bent timber is set and dried.

Considering the actual amount that wood surfaces can stretch and shorten, normally flat pieces can absorb a difference between outside and inside radiuses of 2–3% (without using end pressure or steaming). Where a more severe radius is needed, up to 20 to 30 times the wood’s thickness, steaming and end pressure and retraining straps can be used.

Softened timber can compress considerably without fracture however the outer (convex) face tends to stretch only a little more than non-softened before it tears apart (fracture). Because of this, softened timber can only be bent to a large radius if a means of preventing the stretch on the outside face is applied.

A practical way of reducing tension during bending is to bend slowly and to prevent the ends from expanding by using bending straps with tightly fitting ends – the idea being to constrain the outside-face stretch. Consequently, the practical procedures required to achieve successful bending without failure are not trivial and few rules of thumb work1.

Other ways to bend wood

There are additional ways of softening wood other than with steam by way of chemicals such as liquid ammonia and urea, or by heating rapidly near-green wood with microwave radiation2. Most of these methods require more complex handling and additional difficulties for re-drying of the wood for use.

Species type is an important consideration in terms of appearance, degree of bend and end use. Even if the best performing species is chosen however, its suitability may be overshadowed by the selection of the individual pieces in terms of their quality.

As in design of building structures, defects and their location are critically important and need to be avoided, or if inevitable, they need to be small and located discretely or close to the central zone where bending stresses are less significant. Features to avoid include:

1. Knots. Pin knots are less important in backsawn material but will give rise, along with species with wide rays, to wrinkles with quartersawn material
2. Cross grain. (<1:15) wood near the pith (first 5–6 growth rings) in softwoods often contains spiral grain, this is less of a problem in hardwoods
3. Interlocked grain. Many eucalypts and tropical woods exhibit this feature
4. Decay, gum/kino veins discontinuities and shakes
5. Drying checks. Surface and internal checks are common in
pre-steamed green wood and check prone ash eucalypt species.
6. Brash wood. Brash or brittle heart is usually found near the tree pith and is either of natural origin or resulting from the use of high temperatures in drying or felling damage.
7. Timbers with wide rays. These should be backsawn1, for example silky oak, tulip oak and true oaks

Reportedly, density and rate of growth has little effect on species bending performance1. Interestingly, many of the higher density species listed which bend poorly, have well developed interlocked grain. Secondly, it seems that species with distinct growth rings tend to bend better that those lacking them.

Also, in a study of Australian plantation and regrowth species including karri, jarrah, myrtle, beech, blackwood, radiata pine, shining gum and Sydney blue gum it was noted that when microwaves are used to heat near-green wood, plantation and regrowth species performed better than their mature growth counterparts, but reportedly there were some discrepancies with previous reports particularly for karri, and myrtle beech.

The Trade Circular1 list (see below) shows that the best species for bending still in use today include myrtle beech and to a lesser extent celery top pine with radiata pine, and northern silky oak not far behind. The ash eucalypts, blackbutt, spotted gum, karri and blackwood are in about the mid-range position and many of the high-density eucalypts and rose gum are under the poor banner. Interestingly, the popular Sydney blue gum (Eucalyptus saligna) is not listed, but its performance is expected to be little different from rose gum on wood structure grounds. Generally outside Australia, northern temperate oaks are among the best with hickory and beech (Fagus) at midrange and the maples and yellow poplar being poor.

Dr Jugo Ilic worked as a wood scientist at CSIRO for 36 years. As part of his research activities he authored the CSIRO Atlas of Hardwoods and curated the Australian Wood Collection. 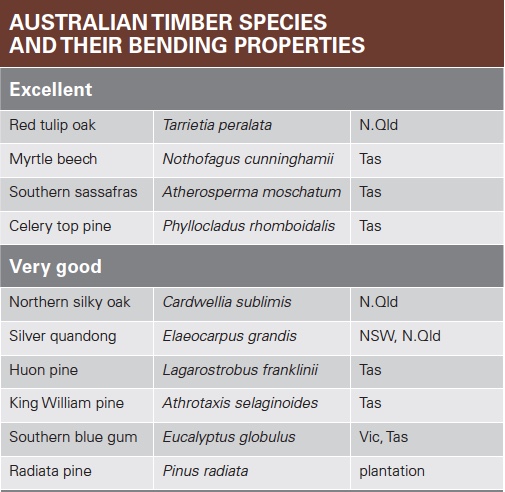 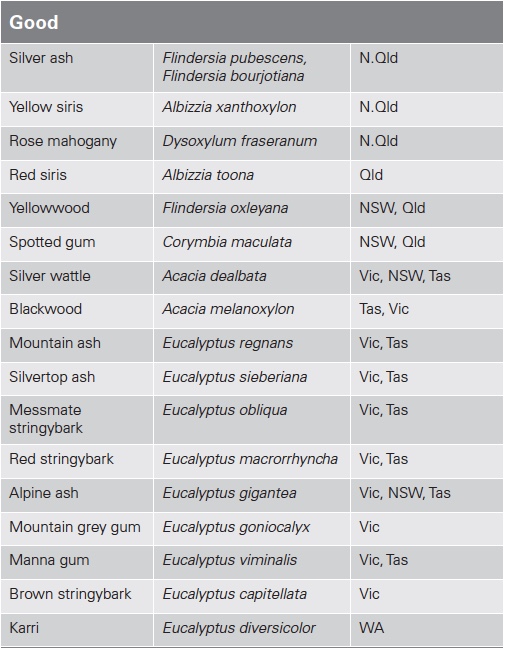 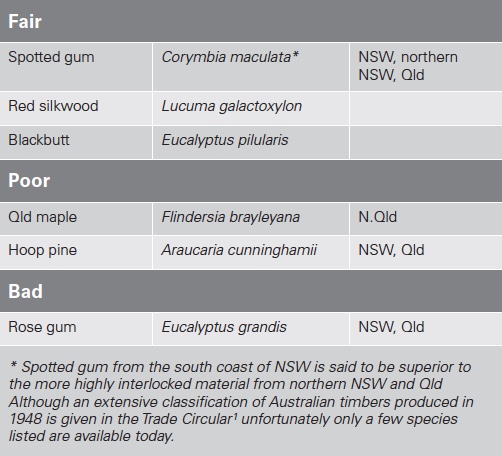