Full size plunge routers and trimmer routers are used every day in our very busy workshop. With so many power tool brands offering more and more cordless options over the past few years, I wasn’t at all interested in replacing our trusty 240 volt corded trimmer routers with any of the new breed of cordless offerings. I was pretty sure they couldn’t perform as well as
our trusty 240v trimmers. That thinking was turned on its head when Peter Mabbs from Milwaukee Tools asked us to test and appraise their M18FTR-0 prior to its release last year. Within the first few uses, I was an absolute convert. I had to have one!
As I had already started replacing all of our cordless drills with DeWalt drills, I couldn’t resist picking up a DeWalt DCW604NXJ (with optional plunge base) after the guys at DeWalt suggested I try one of theirs. Be aware that neither of these routers are sold with batteries so if you don’t already own batteries from either brand you’ll be up for extra cost to purchase a battery and charger before you can get to work. 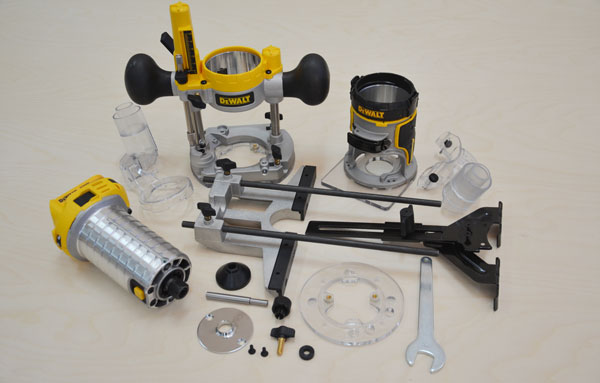 Showing the DeWalt with fence and optional plunge base attachments.

Just in case you’re wondering if either of these trimmers is worth the extra dollars, I for one definitely think so. The lack of cord is pure power tool joy. Our trusty corded trimmers have been relegated to the sidelines. Having used these two cordless trimmers daily for months now, it is impossible for me to pick a favourite. Very different to each other in their design, DeWalt and Milwaukee have taken different approaches in their respective trimmers but both manufacturers have produced excellent tools.
There’s a lot to love about both trimmers. Both come with excellent thick clear bases, with even larger baseplates provided in the box to change over for greater stability or perhaps attachment to jigs. I absolutely love the screw collar style depth adjustment on the DeWalt but then the Milwaukee has a brilliant fine depth adjustment knob within easy reach of your right thumb without changing your normal grip of the tool. 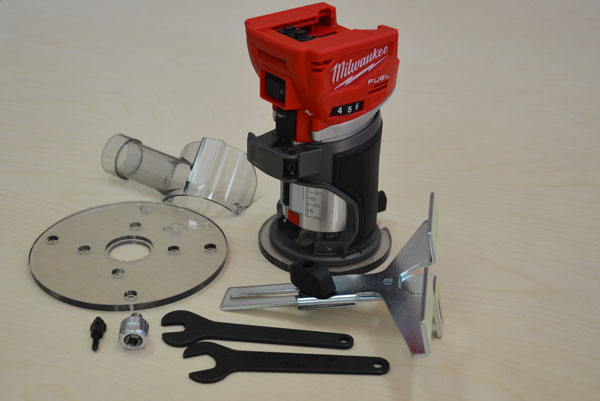 The Milwaukee trimmer with fence, guard and base attachments.

Then there’s the very bright LED lights on both. Yeah I know they’ve been around for ages, but not as bright as either of these. The Milwaukee definitely outshines the DeWalt here. One of the best features of both models is the excellent chuck. Gone is the tiny little conical chuck collet from conventional trimmers that so often refused to release its grasp of your cutter, or worse, allowed the cutter to slip out when you cut a little too deep or fast, no matter how tight you did it up! Both these trimmers sport a large perforated chuck collet retained in the chuck nut just like their full size 1/2-inch counterparts. The 1/4-inch chuck has finally grown up.

The DeWalt is just plain big, giving a sense that this is a serious 1/4-inch router. If you have smaller hands you’ll likely find yourself using two hands to control the DeWalt. The Milwaukee is really the size we all expect a trimmer router
to be, which means it’s much more comfortable to hold for those with average to smaller sized hands. Weight-wise both units are surprisingly heavy once a battery is attached. While most of our customers make this observation the first time they pick up either tool, everyone agrees this is a non-issue as soon as the router is placed upon the work surface. The DeWalt weighs in at 1551gm without a battery and 2180gm with its 5Ah battery attached. The Milwaukee weighs 1371gm bare and 1979gm with a 3Ah battery attached. 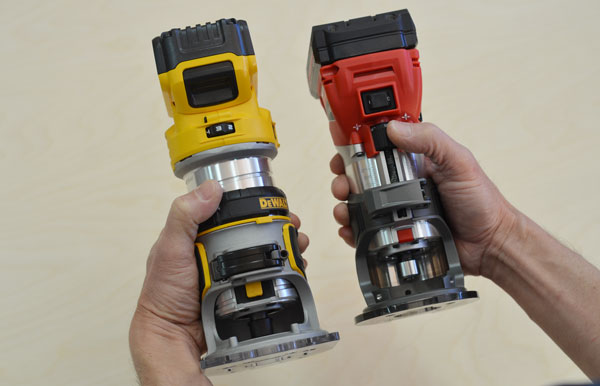 Weight- and grip-wise the DeWalt is a bit larger than the Milwaukee.

Power to perform is there in spades from the brushless motors used in both trimmers. A brilliant feature of the brushless motor is that they stop almost instantly when you switch them off. Neither of these routers hints at lacking power compared to a corded tool. So how long can you use your router on one charge? You’ll likely be pleasantly surprised by just how much work you’ll get done on a single charge. How long your battery will last will depend on variables such as the speed you’re running at, diameter and profile of the cutter in use, depth of cut, timber hardness and how hard you’re pushing the tool to get the job done. In our DeWalt we’re using 4Ah and 5Ah batteries and on the Milwaukee we have 3Ah. We’re mostly getting around half an hour work or so out of these, and that’s a lot of work.

While the Milwaukee has a standard traditional trimmer fence much the same as any other I’ve ever used, the DeWalt has a larger fence that allows the router to be set much further in from the edge of a board which is a feature I really like. Attaching the fence to the DeWalt is done by inserting the fence into a slot, then fastening it with two very small countersunk screws.

While there are extra screw storage holes in the fence for storing the screws when not in use, I can definitely imagine losing the screws quite easily. While on the topic of attaching fences, the one feature of the Milwaukee I’m not so thrilled about is the tiny attachment knob. While the Milwaukee fence has an excellent large black knob for adjustment, my work weary fingertips aren’t thrilled with the clumsy attachment knob. 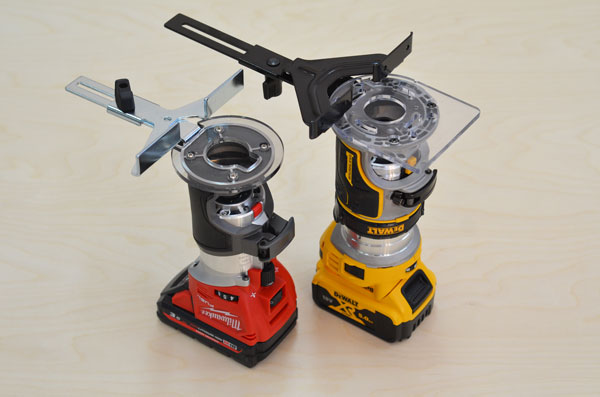 Showing both trimmers with fences attached.

I’ve purchased the DeWalt with the optional plunge base which is an excellent accessory that transforms the trimmer into a serious 1/4-inch plunge router. The plunge base has been well designed and the quality of manufacturing is impressive. While the Milwaukee base was out of stock at the time of writing, I’ll be getting one as soon as possible as it looks like a very worthwhile addition. The optional offset base available for the Milwaukee may just be the solution for routing in some confined spaces.

I can highly recommend both trimmer routers as a worthwhile addition to your workshop. While they are somewhat different in their design, they are both designed so well and afford users much greater freedom in how and where they are used compared to a 240v model. If you’re considering buying one for yourself, I would recommend going to a store where you can hold a demo in your hand to compare grip, weight and feel. I didn’t expect cordless trimmer routers to work every bit as well as a corded one, now I can’t wait for the day we see cordless 1/2-inch routers.

David Howlett is a furniture designer maker and principle of the Perth Wood School, see www.perthwoodschool.com.au