Above: Earrings with coloured (left) and clear resin (right).

This review involves three products that sell individually but work well together in the process of resin casting: resin, pigment and a polish.

The base material is Perfect Cast, a two-part epoxy resin which can be used as either a clear filler, or coloured with additives. Eye Candy is a metallic pigment that doesn’t dissolve into resin but is suspended, creating a metallic effect similar to that seen in automotive finishes. The final product, Kustom Creations, is a two-step polish that promises a glass-like finish on resin.

To trial the three products I needed to begin with the base material, the resin. Perfect Cast has basic information on the two containers, however you need to check the website to get information on mixing ratios, application, clean up and health and safety. 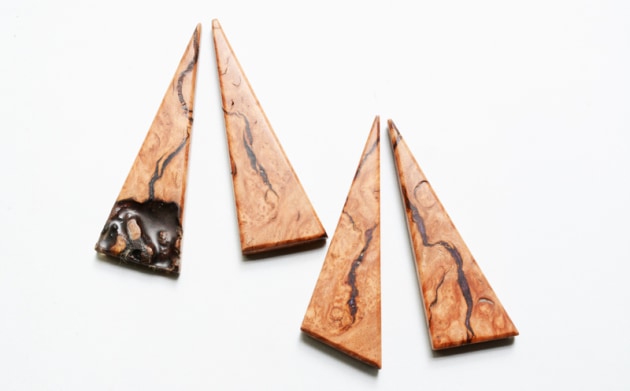 Another set of earrings using coloured and clear resin

The website indicates that Perfect Cast is a solvent-free, liquid epoxy system designed to create ultra-clear castings to which pigments or tints can be added to create translucent colours, and special effects can be created by embedding. It can handle a single pour of 20mm depth which at 25° and under 85% humidity will cure in 24 hours. No doubt, depending on your environment, you should do some trials to ensure the product will work at its best before embarking on a major project.

I received two bottles, one of 1L, the other of 500 ml, which made me think it’s a 2:1 mixing ratio, but I had to revert to the website to confirm that in terms of volume. Yes, the ratio was correct, however in weight ratio it is 100 parts resin to 43 parts hardener. I opted for the 2:1 ratio using small medical cups. 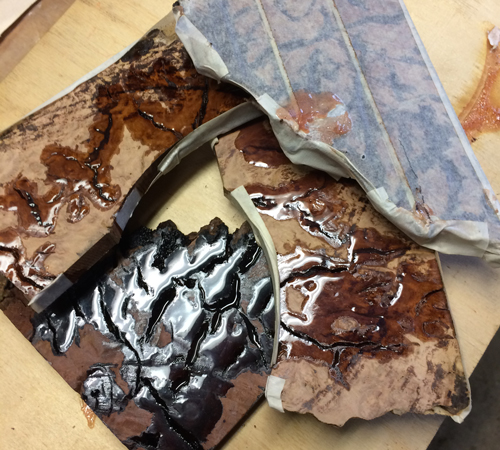 This product opens up a variety of casting options, of which I trialled two: as a filler in voids found in burls and as a resin bed containing other materials.

Cutting a series of burl slices, two of a light eucalypt and two of a dark redgum burl, I mixed a clear resin and one with Eye Candy pigment added to the resin mixture. Sealing the underside of each slice and its edges with masking tape, each mixture was poured into voids and allowed to seep into extremities before adding extra resin to fill in the voids. After 24 hours curing time, the tape was removed to show how well the resin had permeated voids and filled cracks without leaving bubbles. 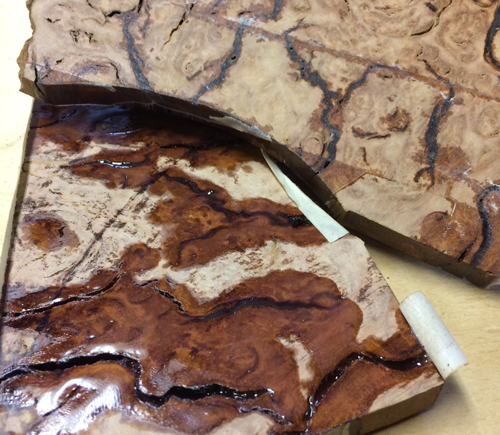 Showing penetration of resin in the samples

As with any resin pour, it is advised to not to mix the two parts too vigorously to reduce the possibility of creating bubbles in the mix, which can be ‘popped’ by gently waving a heat gun over the poured surface, but you need to mix the two parts for four minutes... that’s how long it took Roger Bannister to run the mile last century! And mixing time feels the same.

Although I received five small packets of Eye Candy pigment, I only used two of the Japanese inspired colours (Sushi Roll, Sumo Wrestler, Haiku, Kabuki, Shinto shrine), which range from bronze to metallic pinks and reds. As mentioned before, these colours are suspended in the resin and in my trials had mixed results, so with more experimentation better results could be achieved.

Now back to how the burl fills went... With resin seeping well into all parts of the voids, I needed to do a second pour to top up a level surface which I sanded back on a belt sander once all samples had cured (after 24 hours) then cut to shape and sanded mechanically and by hand through to 320 grit before polishing with the third product, Kustom Grit.

Instructions supplied on the tin state that the two-part product will produce a ‘glass-like’ finish if buffed at 400–800rpm. The buffing wheel fitted to my grinder runs at 3000rpm, which didn’t result in the spectacular results achieved when applied on the lathe running at about 400rpm.

Left to right: Pendant with resin, pigment and inlay off the tool, sanded to 1200 grit and polished with Kustom Grit.

To trial another aspect of these products I turned two pendants, one using clear resin and the other with pigmented resin, both polished with Kustom Grit, and this is where each product really shone.

Cutting a couple of recesses into endgrain redgum, one sample was filled with resin mixed with Eye Candy and filled well over the turned recesses, which ensured a single pour would suffice. The recesses in the second blank were painted with iridescent blue paint before some found objects were inserted and a clear resin mix poured into place.

Left to right: Clear resin pendant surface off the tool, sanded to 1200 grit and polished with Kustom Grit.

Turning away excess material was easy with both cutting and scraping tools and after sanding through to 1200 grit application of the two-part Kustom Grit polish did result in a glass-like finish, as promised! The coloured resin mix had a sparkle similar to that seen in automotive paint, but would stand out more if paired with a contrasting timber colour. The clear cast was exactly that, as clear as glass! 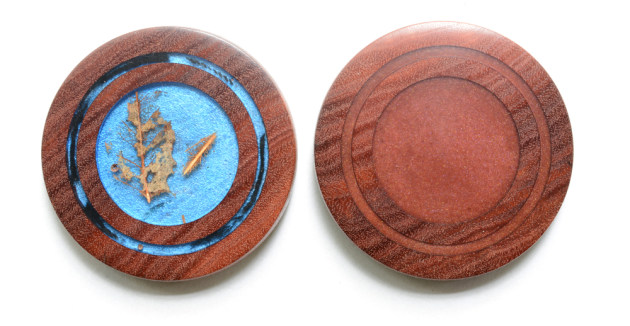 I’ve only scratched the surface with these trials so with more experimenting I’m sure even better results can be achieved. In the mean time, I’m satisfied that each of these products works very well.

Review products supplied by Carbatec, www.carbatec.com.au
Information and pricing for Eye Candy products at this link.