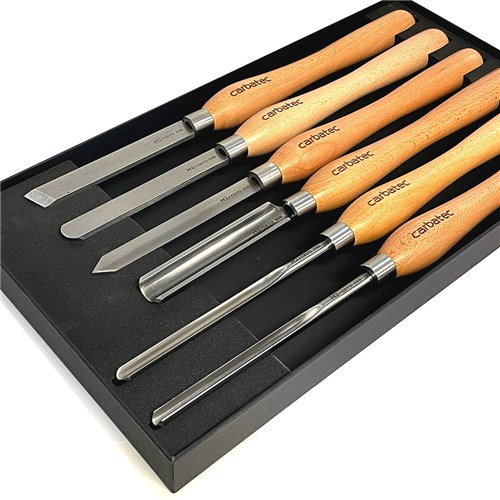 This set of tools looks very impressive when it is opened. It includes a 28mm roughing gouge, 19mm flat skew chisel, 12mm spindle gouge, 12mm bowl gouge, 19mm diamond parting tool and 19mm round nose scraper. The tools are 170–220mm in length and the handles are 320mm in length.

The handles are high quality, the stainless steel ferrules are excellent, and the finish on the tools themselves is of a very high standard, particularly the profile and polished finish inside the flutes of the gouges. But, apart from the smooth flutes, all of this is mostly cosmetic and will not have any effect on how well they will cut, which is the main consideration for any tool. In fact if they were my tools, the first thing I would do is sand the handles to give me a better grip because I find them too slippery.

The thing that most interested me was the ‘cryogenic’ steel. I remember when high speed steel (HSS) started to take over from softer carbon steel turning tools, and it was a game changer. Better edge retention was the main factor in its rapid uptake. When I read the statement that accompanies these tools, I was intrigued. ‘Additional wear resistance and edge holding capability of approximately two to three times that of regular M2 HSS.’

1. A planing cut with the cryogenic tool.

I tried to create an objective test by mounting a piece of very old, hard, and abrasive Queensland maple between centres, and marked the centre to divide it into two halves. I then took planing cuts with my conventional HSS roughing gouge on the left and the cryogenic roughing gouge on the right (photo 1). I marked each tool in the interior of the flute so I was cutting at exactly the same point every time. After five cuts each side I stopped and examined the finish, then took five more and so on until I had reached 50 cuts each side.

There are different ways to assess how well a gouge is cutting: one is the sound the tool makes as it cuts, a second way is how easily the tool moves through the cut, and the final way is to look at the surface of the cut wood. On all counts I felt that my conventional HSS tool gradually fell behind the cryogenic tool and, after 50 cuts each side, I was sure that the difference was quite noticeable.

2. Repeated cuts with the round nose scraper.

Next I scraped a series of coves in the same wood, comparing the cryogenic round nose scraper with my own scraper (photo 2). After a long series of identical cuts I found it difficult to detect any difference, which is probably because the edge on a scraper is far more obtuse than on a gouge and less prone to wear. I did similar comparisons with the parting tool, the spindle gouge and the bowl gouge, and found what I thought were varying degrees of superiority for the cryogenic steel.

Despite my care, much of what I observed was very subjective and that made me wonder how the claims about the durability of this steel can be objectively tested. Some deep digging on the internet showed me that industrial tests can tell us a lot about the characteristics of the metal itself, but little about its effectiveness as an edged tool. One knife testing site (Knife Steel Nerds) made the clear statement that ‘sharpening in terms of grit finish and edge angle have a greater effect on performance than steel choice’.

But I found the most useful information was provided by Steve Russell, a professional turner in the USA, who did series of tests over many months. If you want to read the whole process you can easily find it on the internet but, to jump to his conclusion, ‘cryogenically treated M2 HSS turning tools in every tested category outperformed the standard HSS tools, averaging approximately 250% longer edge life’.

That was enough to convince me, but that doesn’t mean I will be replacing all my existing HSS tools as they will still cut as well as cryogenic tools, as long as I sharpen when I need to. But if you want to reduce sharpening time and are in need of new tools, it is something to consider. I would call this set small to medium, rather than large. Also, I would expect that a ‘set’ would have some overarching similarities, for example a set of spindle tools with a roughing gouge, a large and a small spindle gouge, a parting tool, and a bedan. I think these tools are more a basic sampler that may help you choose the next tools you need to develop your interest.

All in all, I have little to fault with the tools. I wish all turning gouges had flute interiors as good as these and I wish that there was a larger range of gouge sizes made from this steel.