Not long ago, I needed another bookcase to house my rapidly-growing book collection. I had definite ideas about what was needed—8ft x 4ft, four glass doors, moveable shelves, solid pine—but no time to build it. I took my sketches to a local pine furniture shop staffed by Chinese. Within a week I had my bookcase—an excellent job at a good price. This scenario has recurred in Australian history more often than many people realise. 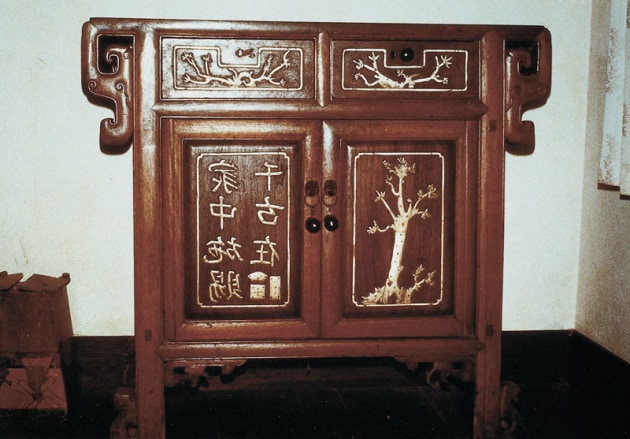 Blackwood cabinet 1850–60s made by a group of Chinese miners as a gift of gratitude to a Western District pastoralist. Photo: La Trobe Picture Collection, State Library Victoria

In the period 1880–1920, Chinese cabinetmakers were a sizable proportion of the furniture makers in most states of Australia. In Victoria, for example, Chinese workshops comprised 16% of all furniture-making businesses operating in the nineteenth century, and they were actually in the majority during the lean years of the 1890s depression. 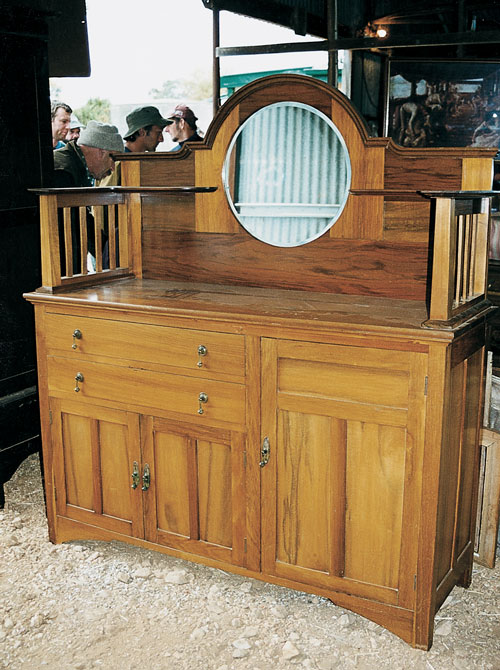 A cabinet stamped 'Chinese Labour', made in Victoria by Louey Quing.

Their furniture is seldom recognised because it looks typically European, rather than typically Chinese. Many items of antique Australian furniture such as cedar chests, balloon-back chairs, kitchen safes, dressing tables, kauri cupboards or blackwood sideboards were made by Chinese cabinetmakers. Some Chinese took up furniture making after the alluvial gold ran out, but others migrated to Australia primarily as woodworkers.

China has a proud tradition of making fine furniture in both plain wood and the more ornate lacquered styles. The best of this furniture has hardly been surpassed in elegance and complex joinery. A petition drawn up in 1855 in defense of the Chinese gold miners by a Melbourne merchant, Quang-Chew, claimed: ‘Among our number there are, believe me, skilled men. We have...carpenters and craftsman who work in precious woods and ivory…’

This long petition was not successful in staving off a highly discriminatory landing tax of ten pounds which was imposed on the Chinese miners. Over 16,000 of them responded by landing at Robe in South Australia and walking 500 kilometres overland to the Victorian goldfields.

One group of Chinese miners who became lost was saved from starvation by a Western District pastoralist. To repay him, they made a set of furniture from the local blackwood and inlaid it with horn. The Chinese inscription on the cabinet reads: ‘A gift bestowed on your family for ever.’ A classic Chinese chair they also made is now in the collection of the Art Gallery of South Australia. It is clear that the Chinese miners did include men with considerable woodworking skills.

After the gold-rush era, Chinese miners who stayed in Australia became involved in a wide range of other activities such as land-clearing, shearing or market gardening. A number became carpenters or wooden boat builders. Although a small number of Chinese cabinetmakers were working in the Australian colonies prior to the gold-rush, it wasn’t until the late 1870s that a Chinese furniture making industry really started to emerge.

By 1878, there were about 380 Chinese carpenters and cabinetmakers in Sydney. In 1880, there were about 66 Chinese making furniture in Melbourne, but this number grew rapidly during the building boom that followed. The Chinese were frugal and industrious and virtually captured the cheaper end of the market, although a some Chinese workshops made finer furniture.

By 1889, in Victoria there were 90 European furniture factories employing 1526 workers alongside 30 Chinese factories employing 410 Chinese workers. This situation changed rapidly during the severe Depression of the early 1890s. Furniture became a luxury which few could afford. The Europeans now tried to make the cheaper articles and competed directly with the Chinese. The Chinese were reduced to selling their items at auction at prices which barely covered the cost of the timber, but they hung on because they had few options. The number of European cabinetmakers plummeted as many turned to joinery or other work. The Europeans unfairly accused the Chinese of ‘sweating’ their workers with long hours and low wages.

The outcry against the Chinese led to the discriminatory clauses of the Victorian Factories and Shops Act of 1896 (matched by similar legislation in New South Wales). All furniture made by Chinese workers or in Chinese factories had to be stamped with the words ‘Chinese Labour’, while all other furniture had to be marked ‘Made by European Labour Only’. Each stamp also had to carry the name and address of the furniture maker. The Chinese stamps were usually triangular and often located on the side of drawers.

The intention of this legislation was to assist the public in identifying  Chinese-made furniture—they couldn’t distinguish otherwise. It was assumed that they would then prefer to buy the European-made articles, but in fact ‘pocketism’ rather than patriotism had a greater influence, and the public continued to buy the cheaper but well-made Chinese furniture. As Federation approached, the depression lifted, and the numbers of furniture makers resurged.

The period between 1900 and the First World War was the high point of Chinese furniture-making in Melbourne. By 1912, there were 818 Chinese cabinetmakers working in 168 factories, together with 2108 Europeans working in 378 factories. Most of the Chinese workshops were highly concentrated around Little Lonsdale St and its tributary lanes. It is during this period that specialist Chinese plane makers can be identified. 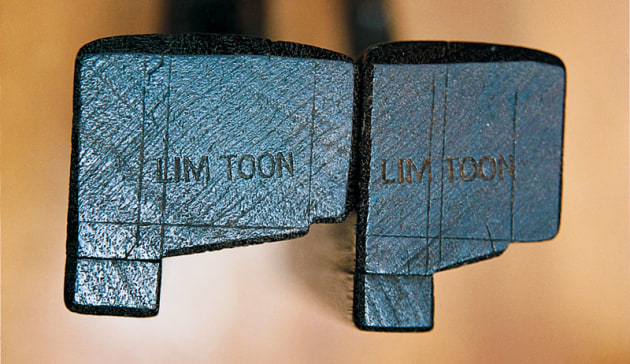 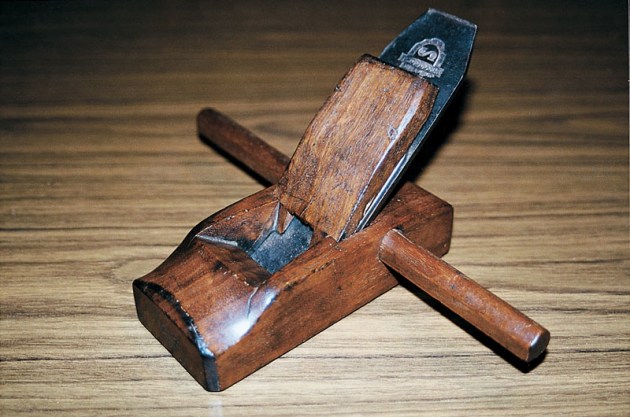 Blackwood palm smoother made by E. Kennedy, toolmaker, Melbourne in the Chinese style.

Those who collect Chinese-Australian planes are familiar with two names which sometimes appear stamped on the toe. The first is Lim Toon who is listed in the Melbourne Sands and McDougall Directories as working as a cabinetmaker in Hayward’s Lane between 1899 and 1902. The other name is Louey Woon who is listed as a plane maker in Leichardt Street in 1908 and 1909. Planes made by these men have been found all over Victoria and one by Lim Toon was found as far afield as Sydney.
The Melbourne Directories revealed the unexpected fact that a third man named Louey Wing operated as a plane maker and cabinetmaker in Leichardt St between 1910 and 1920. So far, I have not encountered any tools stamped with this name, but most Chinese tools are anonymous in any case. 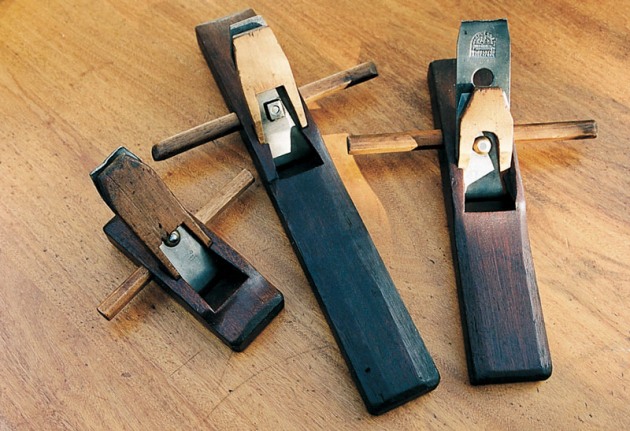 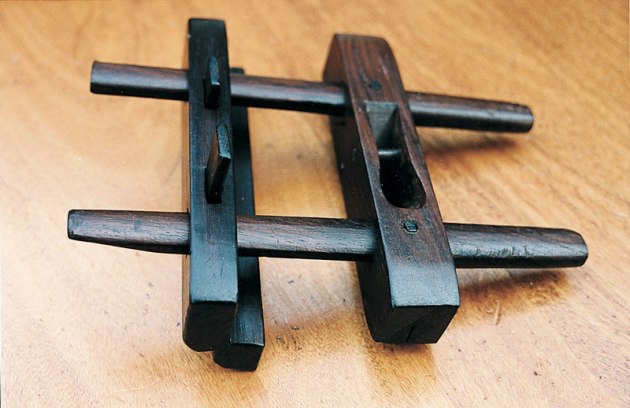 By the time of Federation, the Chinese had carved out niches for themselves as cabinetmakers, laundrymen, market gardeners and storekeepers, despite a good deal of prejudice and opposition. Unfortunately, the first Act of the new Federal Parliament in Melbourne constituted the worst act of discrimination against the Chinese residents of Australia. The Immigration Restriction Act of 1901 cut off all further migration of Chinese people to Australia by means of the infamous Dictation Test.

Approximately one third of Chinese men in Australia had wives back in China, and even their wives were not permitted to become permanent residents, but had to be content with short visits. It is little wonder that the Chinese communities in Australia dwindled progressively until our present era, when migration of Chinese people has once again become possible. A number of Chinese furniture makers continued to be successful for several decades into the 20th century, but by the 1950s the industry was virtually extinct. 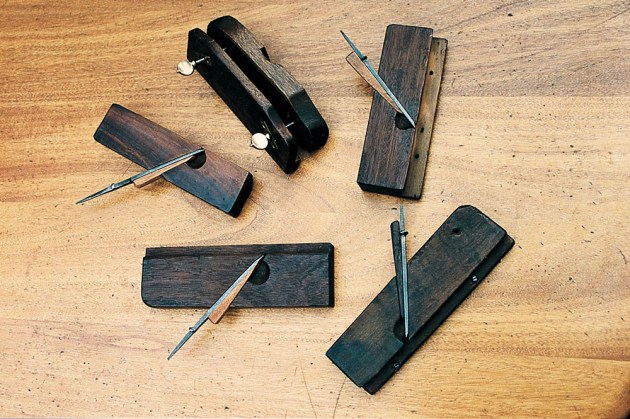 Today there are new young Chinese migrants who are again making furniture in Australia. Some such as Cecilia and Kiam Yoong are designing and making furniture in classic Chinese styles using Australian blackwood and other timbers. Plane makers such as HNT Gordon and Co are making innovative planes with classic Chinese features. It is good to know that Chinese traditions are once again being allowed to influence and enrich the development of woodwork in Australia. 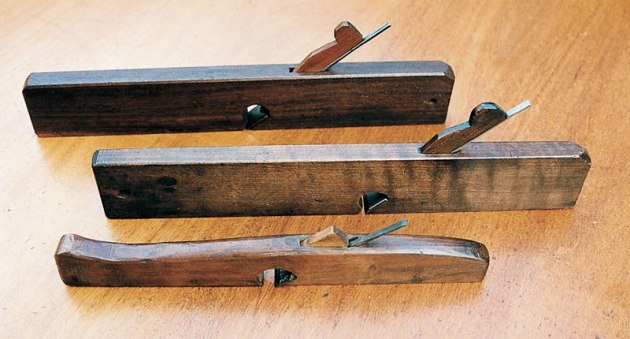 The Chinese cabinetmakers in Australia mostly made furniture in the popular European styles of the day in order to survive economically. However, their working methods and tools continued to follow their old traditions. A number of observers wrote of them sitting astride long sloping workbenches and holding down the workpieces with their feet. They planed downhill, which no doubt saved energy. One of these sloping workbenches is on display in the Melbourne Chinese Museum, alongside a Chinese-made kauri cupboard. 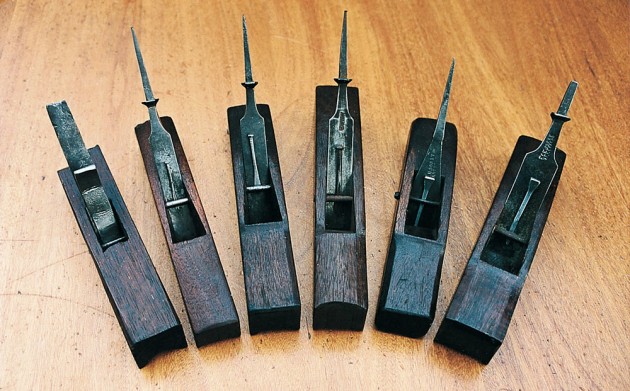 Many of the tools of the Chinese cabinet-makers have been preserved by their families or by tool collectors, and some are still circulating at markets or tool sales. The Chinese frame saws are beautifully made, with the tension provided by a moveable central strut. The Chinese planes perform all the tasks of the more familiar western-style planes, but obviously come from a very different tradition. The smoothing planes are low-slung, with a shaped upper surface and a cross-handle. They are usually pushed away from the user using both hands symmetrically placed, but may also be pulled towards the user.

Many of the smaller moulding planes fit very snugly in one hand. Planes made by the Chinese included simple hollows and rounds, planes with ogee or ovalo profiles, planes for cutting rebates or beveling edges and grooving planes (with fixed or adjustable fences).

One characteristic feature of the smaller planes is that they often used a chisel blade ground to shape as a cutter, and the wedge is often a flattened nail (usually a rose-head nail) which fits under a metal cross-bar. Larger planes employ more conventional wooden wedges and English plane blades. The beveling planes are particularly well-made with extremely well-fitted skew cutters and wedges. 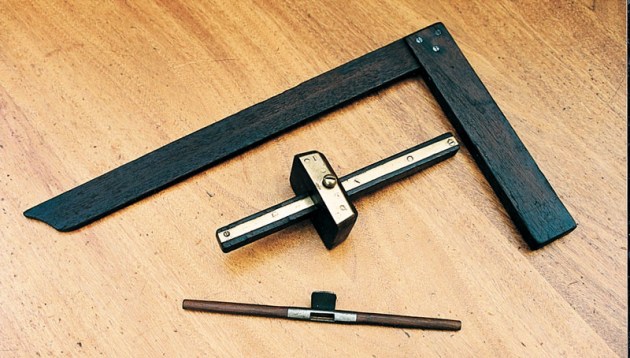 In the words of Bob Crosbie, President of the Traditional Tool Group of New South Wales: ‘Chinese tools…may appear crude but they are a perfected technology; the balance of materials, form and function is superb.’

Most Chinese planes in Victoria were made of red ironbark—a tree which grows in the Goldfields area and which provides a hard, heavy and tough red timber which is ideal plane material. The wedges and cross-handles were usually made of kauri and the accessory fences of kauri, blackwood, cedar or ash. These typical Chinese-Australian planes are sometimes stamped by the makers Lim Toon or Louey Woon and are at least 90 years old.

The older-looking examples sometimes have cutters stamped with Chinese characters. These were planes may have come from China or South-East Asia—also perhaps in the 19th century. The newer-looking planes with German, French or English cutters were probably brought out by more recent Chinese immigrants. Other Chinese tools which have been collected in Victoria include bow-drills, small round spokeshaves, chisels marked with Chinese characters, squares and marking gauges. My fellow enthusiasts in the Hand Tool Preservation Association of Australia are continuing to do a historically useful task in identifying and preserving the tools of the Chinese-Australian furniture makers.

Acknowledgements:
I would like to thank the La Trobe Librarian for permission to use the photograph of the inlaid Chinese cabinet. I would also like to thank the staff of the Chinese Museums in Bendigo and Melbourne and many private collectors for their friendly assistance.

Kevin Chamberlain researches and collects antique hand tools, and is a member of the Hand Tool Preservation Association of Australia Inc