A brief history of woodworking machinery 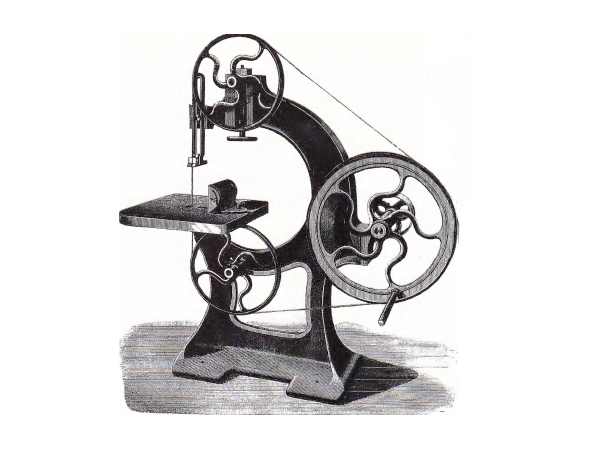 Factories and workshops across the world are churning out wooden products using increasingly sophisticated machinery. Where did this woodworking revolution start, and what were the milestones in its development?

The earliest machines were woodturning lathes, and although simple lathes were thought to have originated in Europe about 3,000 years go, the Egyptians provided the first pictorial record about 300BC.

The drive of these early machines was by a cord wrapped around the work itself, with the reciprocating (or back and forth) motion being provided by an assistant. This principle was further developed in Europe during the 11th century and the pole lathe was born.

This machine had a bowstring which was driven by a foot powered treadle under the bed. The string passed around the drive mandrel and was connected to a springy bough, or pole, which acted like a leaf spring. The turner was now able to drive the machine with one foot while turning the wood – no mean ‘feat’!

In the late 16th century the ‘great wheel’, a wooden wheel of about 1800mm diameter was developed, and this allowed an assistant to generate greater speeds without the reciprocating motion of earlier machinery. Later, the introduction of the treadle did away forever with the need for an assistant. Stepped pulleys to provide variable speeds and the introduction of water power through a paddle wheel assembly further developed the lathe technology. 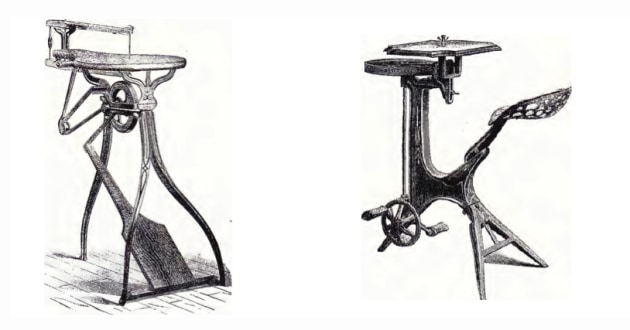 The cutting tool of many early machines was stationary, the workpiece being moved in a straight line when planing or moulding with what was then the machine equivalent of smoothing and moulding hand planes. Rotating cutterheads originated around the time that mass produced parts were needed for an expanding navy, and one of the first applications was in making ships blocks at Chatham dock­yard, England.

The Industrial Revolution, that period of history from the late 18th to the early 19th centuries, is really the birthplace of technology as we know it today. While some scholars now have the view that the pace of change was not, as rapid as once thought, this period of time certainly provided the springboard for the huge leaps in technology that we benefit from today.

The Industrial Revolution was sparked by an increase in world trade which stimulated export industries; a shift from a mainly rural based life­styles to urbanisation; and an increase in technical knowledge, the application of which transformed both the method and means of production.

The steam engine, a major industrial mile­stone, was invented in 1760 by James Watt. Machines were thereafter operated by steam power, driven by heavy leather belts off a central line shaft. Factories powered in this way had elevate d floors under which a system of belts provided power to the machines.

Waste from the factory went to fire the boilers whose steam provided the belt drive. While this was a great leap forward for the time, without ball bearings the machinery was slow. High speeds could not be achieved, and the finish of the timber, while satisfactory for the time, was poor by today’s standards.

England and America were the birthplaces of the modern woodworking industry. In 1793 the surfacer was invented by the father of modern woodworking machinery, Samual Bentham. A few years later in 1808 the bandsaw was invented by another Englishman, William Newbury, but its widespread introduction was not possible until the development of French spring steel blades and cushioned wheels some 40 years later. 1819 saw the invention of the copylathe by Thomas Blanchard in the USA and Andrew Gear of Ohio patented the first spindle moulder in 1853.

With the development of the electric motor in 1873, machines became more efficient. Placement was no longer dependent on the location of the steam or gas engine, and belts did not hinder production. In 1899 when ball bearings were introduced, machinery was able to meet the high quality and mass production demands of the period.

In the mid-l800s the Robinson company started to make woodworking machines. The oldest machine in Australia, a 12" x 4" moulder, was made by this company in 1856, and was retired to a museum in Ballarat, Victoria. Wadkin began production in 1897 and is probably the longest surviving manufacturer of woodworking machinery. In 1906 the sliding table panel saw (made almost entirely of wood) was invented by Wilhelm Altendorf. The long history and consequent technical know-how has made Altendorf the leader in panel saw technology.

In 1912 Oscar Onsrud opened a small machine shop in Chicago, and developed a small compressed air powered high speed turbine motor. Running at speeds up to 30,000rpm, the motor was developed at the request of a friend into an efficient overhead router. Called the ‘Ons-Rooter’, the machine was eventually given a table and pin. The term ‘rooter’ is still used today.

In 1924 Scheppach company was established in Germany, and a few years later in 1920 the Friz company made its first membrane press. Shoda of Japan entered the woodworking machinery market in 1926 with its first circular saw. The post-war year of 1948 saw the Weinig company of Germany change production from farm machinery to woodworking equipment. This move, prompted by the rebuilding of Germany, has made Weinig the undisputed leader in moulder technology.

Since the University of Massachusetts developed computer numerical control (CNC) in 1952 at the request of the American Air Force, the world of machinery has taken another leap forward. While the first CNC woodworking machine did not appear until 1968, it has since been rapidly developed and widely accepted throughout the industrialised world. Modern routers, sawing machines and point to point machining centres are now commonplace in Australia in both large and small workplaces.