Above: Stanley's numbering system was devised about a century ago to denote the size and types of planes they made.

Handplanes are on top of my list of favourites. They are such a beautifully styled tool. And that special swish sound as a shaving curls gorgeously off a sharp blade...unbeatable.

In this article we’ll look at the common ‘Stanley/Bailey’ style plane with a cast iron body, steel cutting blade and wooden handles. Wood body planes are great too, especially because the sole or body can be easily modified or curved to do special jobs, but this article is about the cast iron versions.

Handplanes come in various lengths and widths as experienced woodworkers know, but if you are starting out you may be wondering why you’d need planes with different lengths and widths? Or perhaps what plane you ought to invest in first? And anyway, why are there different numbers on the front of the plane?

The different plane lengths exist because long planes are great at making wood flat and straight while short planes excel at making wood smooth. For example: if you were making a tabletop and needed to join two boards to get the width you wanted a longer plane would do it better than a short one.

However when it comes time to plane the top of the table, the short plane is better as you just need it smoothed out – here absolute flatness is unnecessary. It should come as no surprise that long planes are commonly called ‘jointers’ and short planes are ‘smoothers’.

What do the numbers mean?

Nowadays handplanes are often called a ‘number five’ or a ‘number seven’ rather than smoothers, jointers, jack planes or any of the other common names associated with the length of a plane. The numbering system was devised about one hundred years ago at the Stanley Rule and Level Company to differentiate the size and types of planes they made. 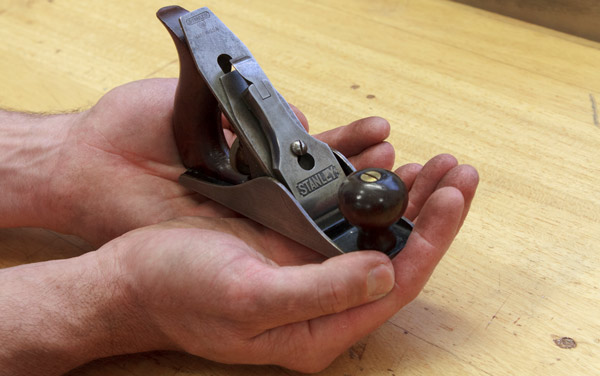 #1 size hand planes are very small and rare and basically unusable by most adults.

The numbers 1 to 8 simply refer to different lengths of plane with #1 being (very) short and #8 being pretty long. After #8 the system of numbering gets as weird as some of the specialised planes the numbers go with. I’m not concerned with specialised planes in this article; I’ll concentrate on the common, versatile and useful bench planes shown here.

Long planes such as the #8 shown above are good for making wood straight and true.

The typical smoother and jointer planes are a #4 and #7 respectively. A #5 is a called a jack plane, a #6 is almost a jointer but is call a fore plane. As the numbers and length increase so does the width: a #4 has a narrow blade while an #8’s blade is wide.
In my opinion the four most useful planes are 4, 5, 6 and 7s, and I would expect to see three of these four standard lengths in regular use by an experienced woodworker (as well as a block plane. The #1 to #3 planes are not often used as they are so small and the #8 is a heavy beast of a plane which also makes it less popular. 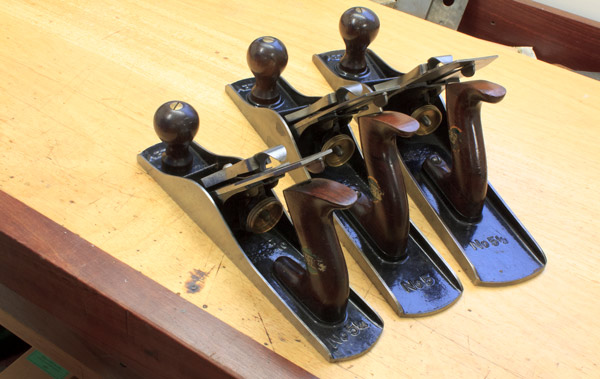 Hand me my #6 please

There are all sorts of reasons for plane size preference – perhaps it is the size of a maker’s hand, or the planes their teacher used, or the size and scale of the pieces they make.

Personally I like my #6 the best, although I recently got a good blade for my #5 and it is getting more use now. My hands are a little big for the #4 so I don’t use it much. A #7 is good but I still prefer the balance of a #6. 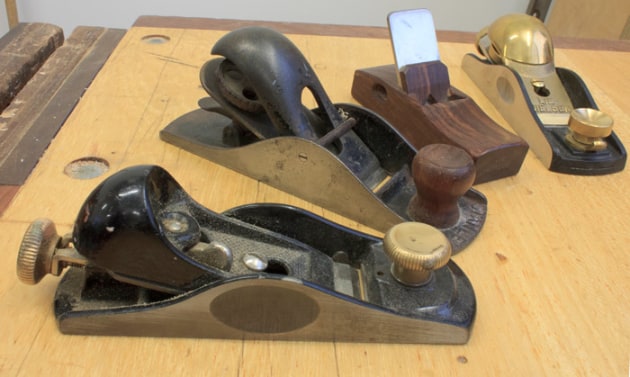 Block planes are short planes that you can use with one hand to flush off a bit sticking out, or take edges off, or smooth over a curve, and so on. You can use them for a myriad of jobs and it is definitely worth getting one. There are plenty of different numbers associated with block planes but they all fit into one hand and work pretty much the same way.

There is a notion that block planes work better on endgrain than standard bevel down planes. In my opinion any well sharpened plane will shave endgrain successfully – I have never found my block planes to do a better (or worse) job on endgrain.

Whatever plane you have or use most it needs to work well. It is really difficult for a beginner to know if those lovely shavings aren’t happening because of their technique or because of the plane. If you are having problems getting nice shavings it is probably the plane’s fault. All planes need really sharp blades to perform well. And the blade needs to be fixed in the plane firmly too.

Most planes benefit from tuning up and some could need a lot of attention. There are many planes out there (especially cheap ones) that make good door stops or cockroach killers but may never be good planes. Luckily there are a few manufacturers of handplanes and other woodworking tools making superb products. Veritas and Lie-Nielsen are examples. Sharpening plane blades and tuning up handplanes are topics in their own right.

So if you want to buy a plane, the choice of buying new or old needs consideration. Choosing an old plane or new premium plane will essentially come down to how much money you have to spend versus how much time you have. Tuning up your grandfather’s 5-1⁄2 will take time while you can expect a new expensive plane to work straight out of the box.

I’d recommend a #5 and a block plane for most beginner woodworkers as their first planes. They are both versatile and very useful planes. If you plan to make large things like tables and cabinets get a #6 or 7 next followed by a #4 – reverse that order if you want to make chairs or smaller objects. Get some sharpening tuition as soon as you can and practice keeping your blades super sharp. Above and beyond all that: have fun planing.

Adrian Potter is a studio woodworker who lives and works in Adelaide. He was featured on the cover of issue 70. See www.adrianpotter.net.au