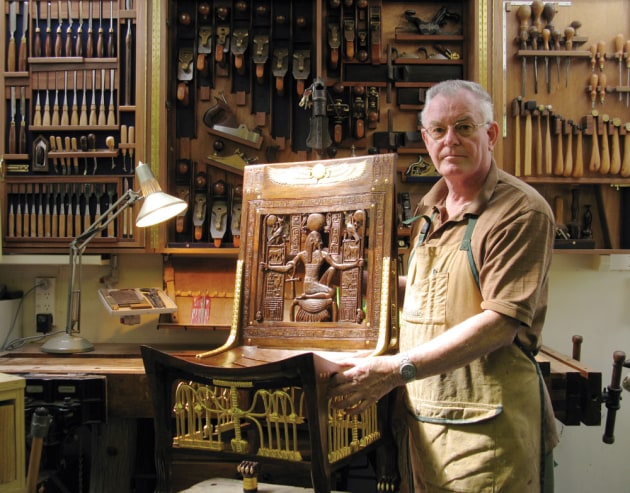 My first visit to Cairo and the Egyptian Museum was in 2004. Amidst an overwhelming mass of antiquities was an exquisite example of the chairmaker’s art from the tomb of the pharaoh we know best, Tutankhamen. The ancient Egyptians’ furniture tends toward the heavy—in form, construction and surface decoration. Animal forms were commonly used because of religious belief that the creation of artificial objects risked introducing chaos to the universe. The throne before me had a delightful aesthetic; excellent proportions, restrained surface decoration and gilding. In short, it spoke to me. 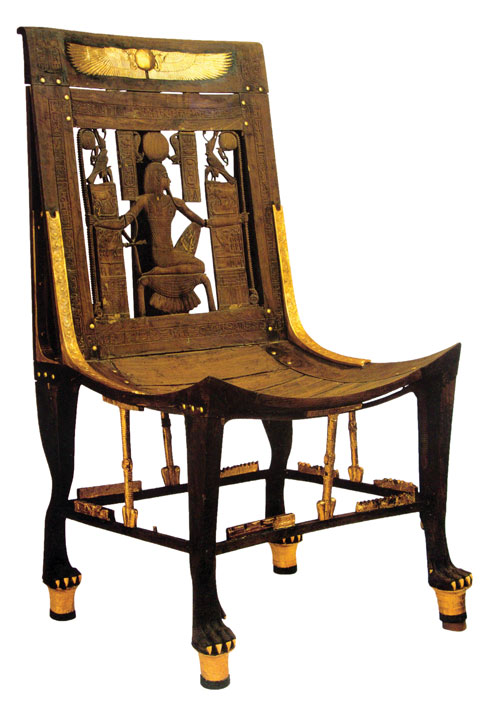 An image of the original Tutankhamen’s Cedar Throne and Stool, reproduced with permission from Tutankhamun, TGH James, 2000, The American University Press in Cairo.

My working life of over 50 years as a career foreign service officer has meant stints of overseas postings interspersed with time at home in Wellington, New Zealand. I had decided that my assignment as Ambassador in the Middle East in 2003 would be my last. That assignment was a hugely appealing prospect from both personal and professional viewpoints, in fact proving to be even better than expected. But I knew that after four years, with responsibilities covering seven Arab countries, not to mention unknown consequences from an imminent war in the region, it would be time for a break. My workshop beckoned and my thoughts returned to the cedar throne I had seen in the Cairo museum.

Work commenced in 2008. My first step was to make full-scale drawings. The Thrones, Chairs, Stools and Footstools from the Tomb of Tutankhamen by M. Eaton-Krauss (Griffith Institute, Oxford) 2008 contained photographs and measurements of the cedar throne however some critical measurements were missing and others inaccurate. So I made a full-scale model in cheap wood to test measurements, design details and a workable build approach. With that done decisions were needed about the choice of wood and finish for the ‘real’ thing. 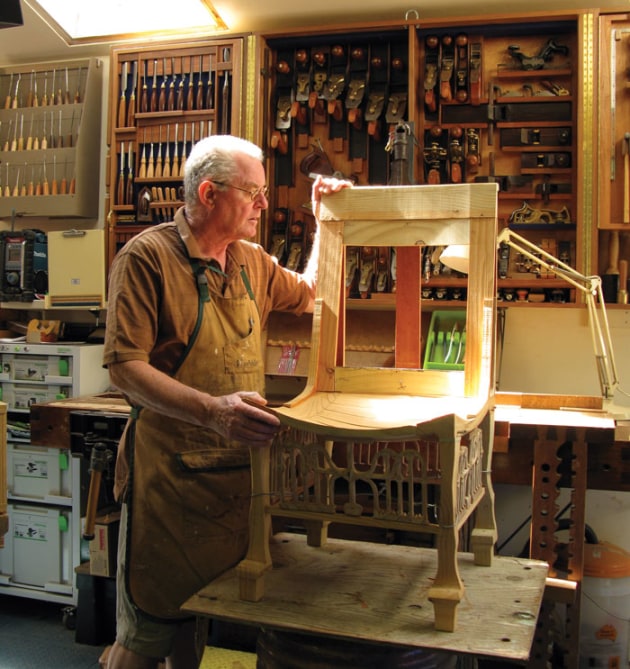 Jim Howell with the intial mock-up of the throne in his workshop.

The original throne is believed to be of Lebanese cedar. Since that is now a protected species I opted for black walnut. I decided to repair blemishes now showing on the original, namely cracks in the carved floating panel seat back, replacement of the lost fretted and gilded heraldic plants between the legs, closing gaps between shrunken boards atop the footstool, and generally to give a lightly polished finish.

The seat was technically the most difficult. It is deeply concaved in two directions. Thin tenons on the seven curved seat slats had to be angled to slot into angled mortises in the side rails. These side rails are deceptively thick to accommodate the deep double-coving. They were first bandsawn to rough shape then hand finished, as were seat slats. Legs were bandsawn, then hand-shaped and carved into lion’s legs. Tenons atop the legs slot into mortises in the seat rails and are pinned. With stretchers in place the seat is extremely strong. The throne has 57 mortise and tenon joints.

The seat back design is masterly for its strength. It is literally a triangle of vertical rails jointed into the seat. Cross rails curved along just part of their length add complexity but the top rail, which has a rolled-over curved top, challenged this amateur. The curved seat back panel is fragile at only 8mm thick. It is carved on both sides with hand pressure alone. No mallet!

My first attempt at the fretwork between the legs, using plywood, was a failure. So I turned to shaping copper tubing and hand carving individual flowers (20 papyrus and 20 lotus flowers), surprising myself with the result. The lion’s toes are CITES-permissible mammoth ivory. Patinated bronze plates are attached to leg bottoms and gilt gussets reinforce the junction of the seat and back. 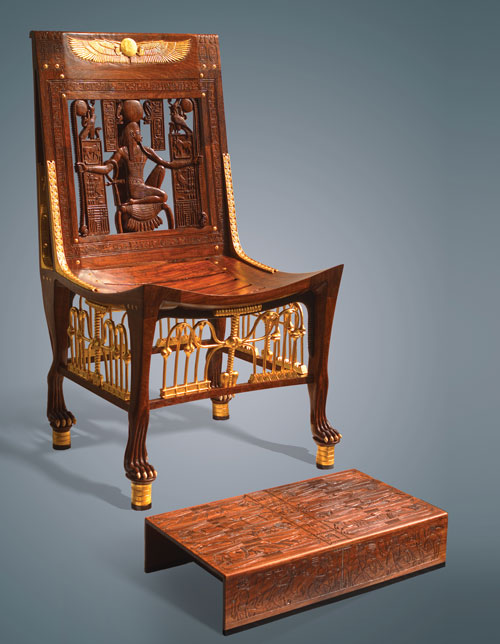 A labour of love and historical fascination: Jim Howell’s replica in walnut of Tutankhamen’s Cedar Throne and Stool.

The footstool also is in walnut with ebony strips at the bottom as on the original. The carvings depict prisoners, tied together and with arms and weapons bound. Placing them under the pharaoh’s feet, on a footstool, asserts their defeat and subservience, as do the hieroglyphic inscriptions.

My homage to Tutankhamen was finally completed at the end of 2012 and represents about 1200 hours of work.

Jim Howell is a woodworker who lives in Wellington, New Zealand. He now works part-time in New Zealand’s Foreign Ministry. Email him at: ajhowell@inspire.net.nz