The Life of a Master Maker 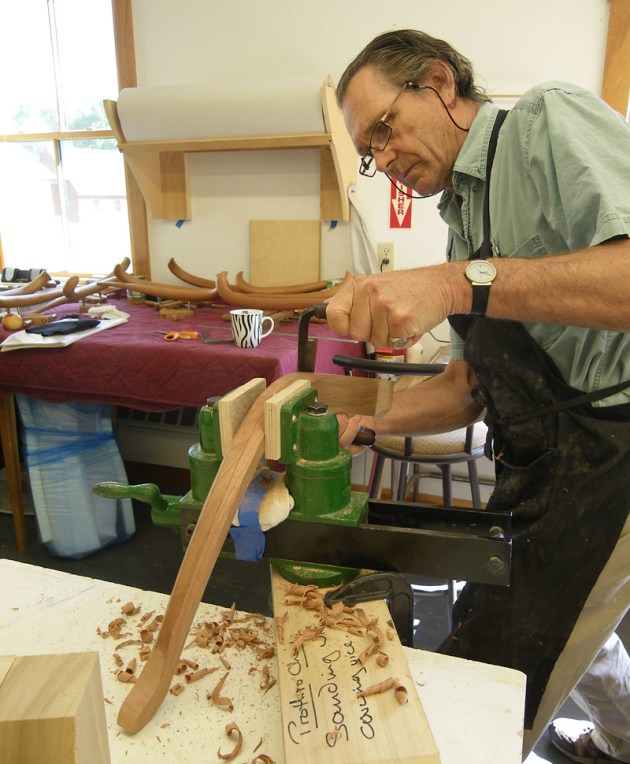 Above: David Upfill-Brown shapes laminated cherry components with a drawknife.

The career path of an artist/craftsman, designer/maker, or whatever you like to call someone who has managed to earn a living and reputation by selling what they make, is usually interesting. This is especially so when many well-known studio makers seem to have been subsidised by a spouse or job.

A rare exception is renowned cabinetmaker and teacher David Upfill-Brown, who I met at Parnham House in England in 1979 and have kept in touch with ever since. We both emigrated to Canberra in 1982.

David was born in 1948 in South Africa but raised in Rhodesia (now Zimbabwe). At the age of 21 and after a stint in the army ‘where mercifully I didn’t have to do any fighting’, David began exporting indigenous work to South Africa. Within weeks he realised that makers seemed to have more fulfilled lives than middlemen and marketers. He took a few lessons from the famous Zimbabwean stone sculptor John Takawira.

By 1972 Rhodesian politics drove him to emigrate to South Africa where he married Hermione. They were house-sitting a large house with outbuildings on the Knysna coast. it had been reclaimed from a troop of baboons, and the only electricity was for a generator to pump water into a header tank once a week. ‘This really pushed the hand skills and we lived very well on fish I caught in the ocean, and we had veggies when we could scare away the baboons from the garden.’

David had basic sets of wood and stone carving tools plus six tons of stone his father produced as a wedding present. ‘I transformed the wedding present and wood off the beaches into carvings that would sell to local galleries — carvings heavily influenced by the Shona.’ 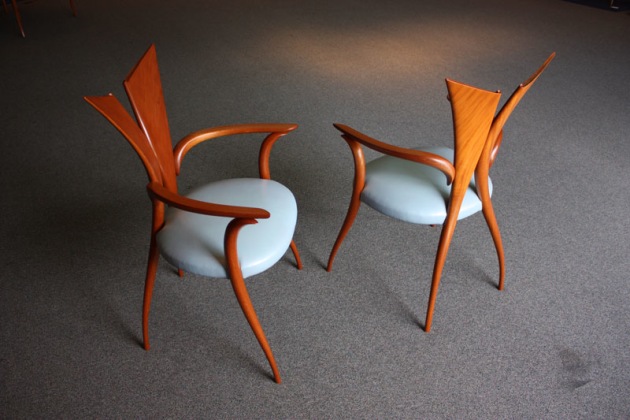 ‘My first solo exhibition in 1976 at the South African Association of Arts Gallery, in Cape Town, was a real eye-opener. ‘I didn’t mind the few encouraging reviews, but I definitely did not enjoy some harsh critical observations. The lesson I took from this was that when you put your work out there and so yourself, you must be prepared for harsh criticism.’

David didn’t feel the need to explain or justify his work. ‘I was simply trying to share some of my feelings for a beautiful environment through figurative carvings of fauna and flora, develop as an artist and pay some of the bills. Criticism of my work as “only decorative” obtusely encouraged my growing interest in furniture, especially as this part of the Cape had such a strong furniture making tradition.’ 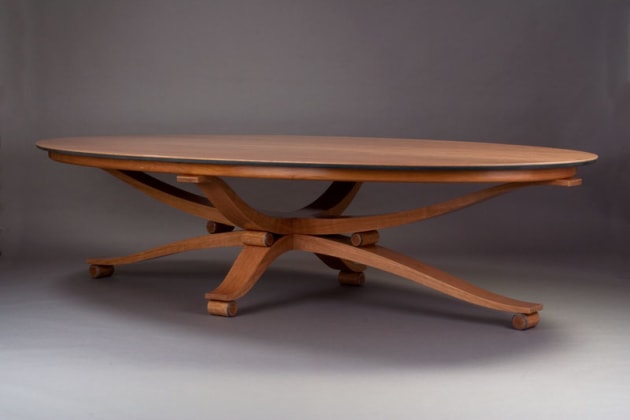 These days David uses power tools whenever possible, but his ability to work quickly and efficiently is based firmly on those times without electricity. ‘It’s only by using hand tools that you really learn about your material. We start off too enamoured with wood, but as we learn to use it — perhaps the most intractable of materials, we are more able to design for it. So many people who come to woodworking as designers, never really seem to come to grips with the material... Perhaps as designers we should first really respect the material, then learn to design. Sadly there seems to be way less acknowledgement of the "truth to material" concept today’.

A few months after the Cape Town exhibition, the Upfill-Browns moved to Britain to escape the apartheid regime in South Africa. ‘We had to start all over again, surviving by doing house renovations, carving house signs, restoring antiques, anything that came along. And family and friends very kindly commissioned furniture and sculpture.’

Then in 1979 David had an epiphany when taken to Parnham House in Dorset where John Makepeace had recently opened a woodworking school to train professional designer/makers. The two year course was exactly what David both needed and wanted, although a baby on the way and the cost were never going to make it easy. 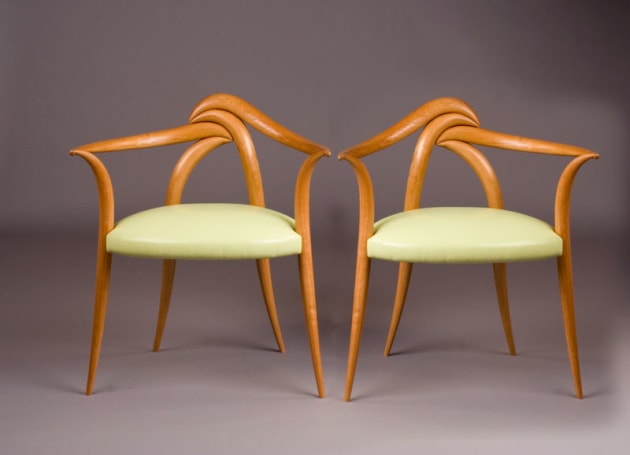 They sold some family silver (‘hideous Victorian stuff’) that paid for some of it. First year students built a series of set pieces under the guidance of inspirational Robert Ingham. ‘Then in the second year we designed our own projects assisted by visiting instructors — who with hindsight were most beneficial. Apart from the ilk of George Ingham and Richard La Trobe-Bateman a ‘suit’ arrived from the Midlands in the latest lotus. He was there to instigate the production class and as ‘artistes’ we were appalled: The fact that Makepeace pushed this at us we felt was an affront. But it was impressed on us that production pays the bills and is the passport to freedom.’

David recalls the same message from Alan Peters and David Colwell; and then visiting my workshop: ‘And i remember seeing the roughed bowls at your house — hundreds and hundreds of them, and I began to appreciate the benefits of production’.

After Parnham, David worked for about nine months fulfilling furniture commissions and making a kitchen, first to pay off some debts, and then for flights to somewhere less crowded than Britain. They decided to go to Australia where the late Chris McElhinney, a fellow student at Parnham, had offered them space in his workshop at Karen O’Clery’s Cuppacumbalong Craft Centre at Tharwa, south of Canberra.

In mid-1982, David landed in Australia with his hand tools and about $500, most of which was spent on an ancient Datsun. A very rural, small, and derelict shearer’s quarters that was rent-free for fixing up, became home. It had three rooms, no doors, no windows, very basic plumbing, and marginal cooking facilities. In the month before the family arrived, David fixed the building, established a workshop, and set about making stuff for Cuppacumbalong. 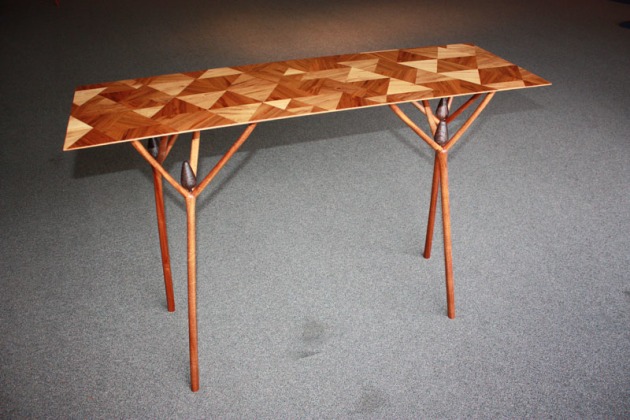 Isopogon Table, 2013, blackwood and ebonsed jarrah. One of a series of five, each unique in pattern and form.

The runs of hand mirrors, wine racks, and small furniture that David made for the gallery also sold well to other retailers like the National Trust, Craftworks in Sydney, and the Meat Market in Melbourne.

It helped that in the 1980s the crafts were booming, and orders were easy to come by. And in those days galleries paid for stock (rather than insisting on consignment), so there was money in the bank.

In the years 1984–90 the Upfill-Browns became agents for Adams Timber dealing in quality hardwoods. Hermione managed the office and sales whilst David picked the best boards for his commissions and to stash away. Numerous hobby woodworkers regarded Saturday morning at Adams Timber to be an essential part of each weekend, enjoying David’s expertise and precise machining service.

By the mid 80s commissions had David flat-out but frustrated that there was not enough time for his own work, or, as he likes to say, playtime, although he did squeeze in a second solo exhibition in 1988 at Cuppacumbalong and Distelfink in Melbourne. There were some good corporate and government commissions like the Speaker’s Chair for New parliament House in Canberra, which generated furniture commissions for several Pacific Island states. 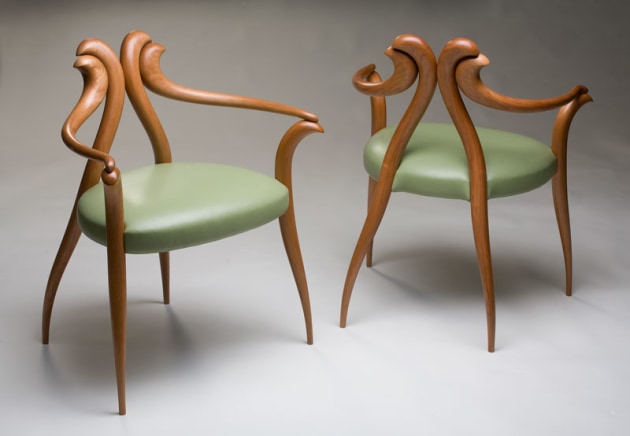 In 1991 David was persuaded to do some teaching at the ANU in Canberra. ‘George ingham (Head of the ANU School of Art Wood Workshop) asked me to teach; he said, “you’re spending too much time in your shed — you need to get out more”. I turned out to be quite good at it. And I enjoyed it. Like one’s customers, students push you to places you might not go in terms of technique and design, only more so.’

The teaching led to building a 23 x 9 metre workshop in Tharwa with facilities for ten students. ‘We gave up on Adams Timber, and I taught two nights and a day a week. It was tiring, but like the timber business it generated orders. It’s interesting how once people understand the whys and wherefores of furniture they want better stuff at home.’

This teaching experience led to setting up facilities and curriculum as the first academic director of The Australian School of Fine Furniture in Tasmania. It was not a particularly enjoyable four and a half years, with too many administrative distractions for a man who prefers ‘to be at the coalface’. In 2004 David was about to resign when he was approached by American Peter Korn to set up a nine month comprehensive furniture – making course at his Center for Furniture Craftsmanship in Maine. With the proviso that he would only teach (nothing administrative), David established and ran the course for five years. 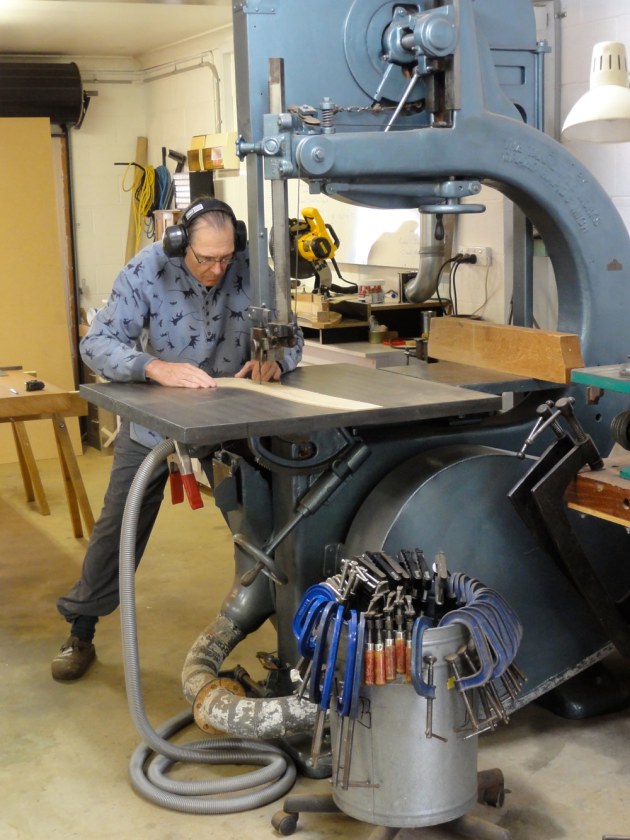 In 2009 the Upfill-Browns were back in Australia setting up home and workshop in Gerringong on the NSW South Coast, keen to indulge his love of teaching and desire to play (make). He taught part time at Sturt Wood School in Mittagong and made an annual trip to Maine. ‘The great thing about teaching in Maine is you teach in tandem with others and get to meet and work with the big guns, people like Garrett Hack, David Colwell, Brian Boggs.’ And of course David himself is of the same calibre, although he says: ‘If i’m regarded as a big gun it’s because learnt so much from the others’.

Through the school’s fellowship workshop in Maine, David was able to play more, to make, without restrictions. ‘Commissioned work in Australia is a bit ordinary. It doesn’t give you a lot of room to move artistically. It’s practical and purposeful — it’s okay being part of a service industry creating well designed more meaningful products for people’s houses and offices, or bigger commissions for corporations. However clientele in the US are prepared to spend money on speculative work, there’s even a core of collectors and patrons who challenge you to be adventurous. i’d love to find some here.’

It’s been a career in which the major capital was David’s ability to work long hours, making a lot of stuff many artist woodworkers disdain, fortified by a desire not to compromise either quality or ideas. Most tools have been purchased second-hand, like his huge bandsaw that was restored to perform like a finely tuned Stradivarius. Taking on most jobs on offer meant that whilst early commissions often presented a steep learning curve, the end benefit is a formidable array of techniques.

Many people dream of earning a living by working materials they love and selling what they make, but few achieve the dream. David’s preparedness to shift around the world and take on any job has led to a more interesting life than might have been anticipated.