Once were giants: New Zealand kauri 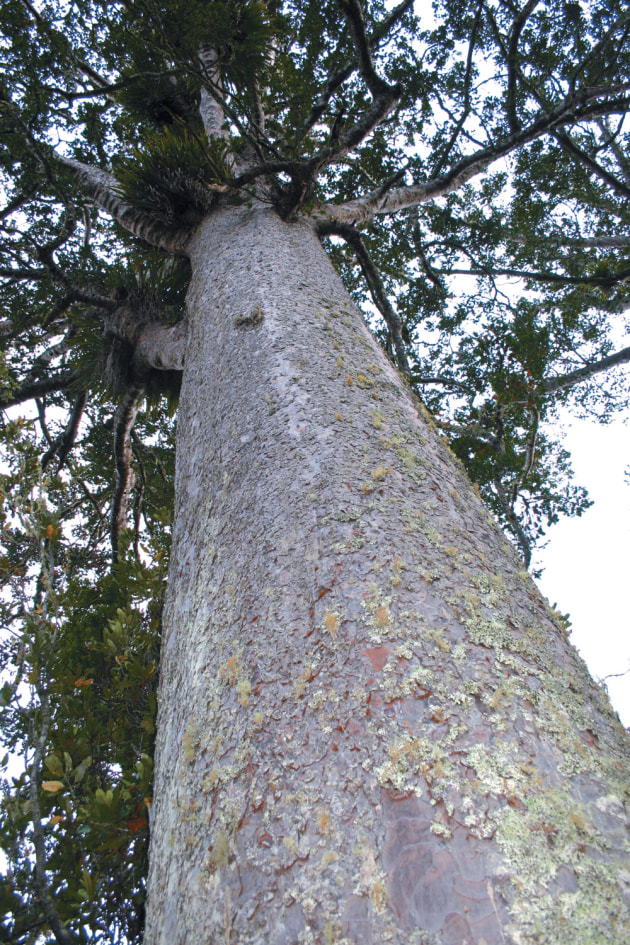 Agathis australis is New Zealand’s largest native species which generally grows only above 38° latitude, north of a line drawn from Katikati to Kawhia. The kauri is an ancient confier, early forms of which were in existence 250 million years ago when New Zealand was still part of Gondwana- land. Mature trees produce a huge, heavily branched crown. Seed cones are today harvested by helicopter.

Within the space of a few hundred years, colonising Europeans felled huge tracts of old growth forests throughout the world. Like Australia’s red cedar, the long-lived giant kauri trees of New Zealand were dealt a similar fate.

You have probably seen those old photos of timber cutters standing near or reclining against some giant of the forest, recently felled. In North America, photographer Darius Kinsey documented the cutting of giant redwoods while in Australia others took photos of men cutting and hauling huge cut cedar tree trunks. Once Europeans arrived on Aotearoa, the giant kauris of the later-named New Zealand were dealt a similar fate.

The photos may inspire nostalgia for old days and ways but, for the trees, the statistics are damning. The giant New Zealand kauri (Agathis australis) can live for up to two thousand years. In the space of 100 years, from the 1840s on, most of 1.5 million hectares of kauri forest was either exploited or burnt. By 1940, in the more inaccessible high country around Auckland and Coromandel, less than 1% of forest containing mature kauri remained. Since their arrival, some 1000 years earlier, Maori people had also utilised the wood of the kauri tree, notably to make their waka or long boats, but they had managed to leave most of the forest intact. 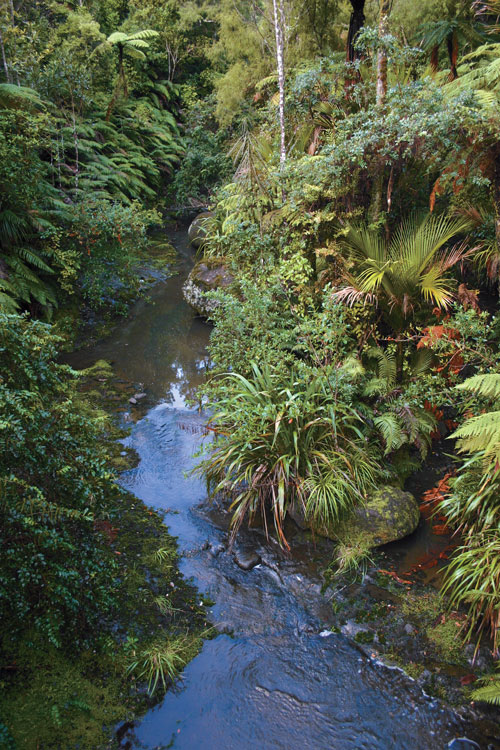 It’s hard to imagine how modern techniques of genetic engineering could come up with a better timber for milling, unless it was a kind that could be grown very quickly of course. Kauri grows tall (up to 52 metres high), wide (up to three metres across and 15 metres around) and unbelievably straight. Because it’s a softwood it is relatively kind to sawblades. Because it has the manners to self-prune, shedding its lower limbs for the first ten or twelve metres from ground level, the wood produced is clear with very few knots. Close up the tree is beautiful—the surface of the trunk is shiny and smooth beneath the giant flakes of bark which continually slough off.

As a raw material its potential fuelled an ingenious operation to cut and shift it from the forests with largely man and animal power alone. By damming creeks and streams and then releasing them, the felled logs could be floated down to the lower reaches and then transported by horse and bullock to the Port of Auckland for export. In 1900 more than 10,000 tonnes were shipped overseas, compared to less than one tonne sent nowadays. In the 1800s the annual estimates of kauri milled were, at 236,000m3, higher than the total annual volume of all native species currently milled1.

Long and large sections of even and straight-grained kauri were perfect for the masts and spars of sailing ships, for building bridges, wharves, mine-props, rail sleepers and for the exterior and interior of houses as well. Kauri can be sawn into wide boards and is regarded as easy to work and finish. For a softwood it has a relatively high density of 560kg/m3. Ranging in colour from light biscuit to rich red-brown, the wood is stable and strong, and the worst criticism that can be made of it is that, lacking strong figure, it is visually on the bland side. 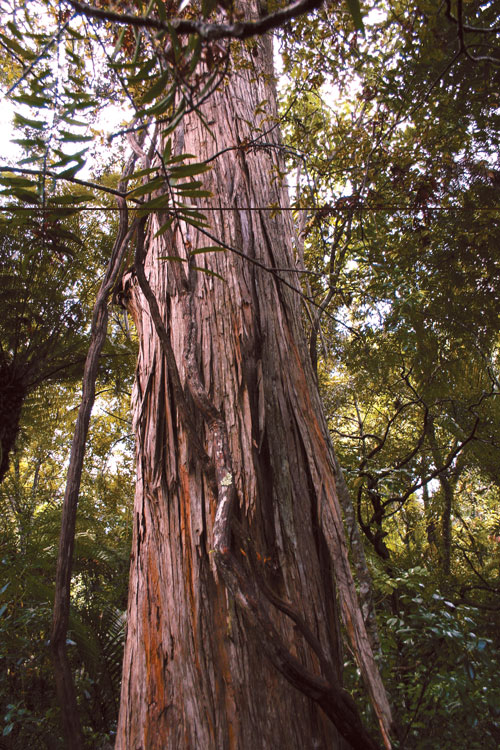 By the 1970s New Zealand government policies existed to protect natural and managed forests. Of the remaining old growth kauri trees most are up to 30 metres in height and three metres in diameter, although a few named giants remain. In 1977 Toronui (‘tall as the sky’) blew down to leave Tane Mahuta (‘god of the trees’) in the Waipoua forest as the officially recorded largest at 51.2 metres in height and 4.4 metres (five metres from the ground) in diameter. Around 60,000 hectares of regrowth forest is estimated to exist in the high country around Auckland and the Coromandel peninsula. The wood produced from kauri regrowth or ‘rickers’ is not as durable or stable as that sawn from the older trees. The kauri available for purchase today comes from regrowth forest, from salvaged tops and butts from earlier logging operations and from recycling or from ancient kauri recovery.

With thanks to Leonard Sears, for his assistance with information on New Zealand kauri forests and the kauri timber industry.
Visitors can learn more about the kauri timber and kauri gum industries at the The Kauri Museum in Matakohe, 140km north of Auckland, see www.hmu.com/matahohe

Twenty million years ago volcanoes near Auckland erupted and pushed their way above sea level to form what is now called the Waitakere Ranges. The Maori have a spiritual connection with this land where they used to bury the bodies of their dead and the placentas of their newborn. More recently the Waitakeres were dominated by an industry which fed a worldwide market hungry for its trees.

Looking out from high up, the volcanic cones are covered by a carpet of regrowth kauri, totara, tree ferns, rata vine and many other species which enjoy wetland conditions. The black sand beaches and forests were used as the backdrop for the filming of the The Piano and the television series Xena and Hercules. The photo below shows a carved pou near the entrance of the Arataki Visitors Centre. The park contains the largest remaining stand of mature kauri in the Auckland area.

Declared a sanctuary in 1952, the Waipoua Forest further north is the largest remaining kauri forest in New Zealand. Commercial logging of the forests ceased by the 1980s.

Like the amber which is recovered from the Baltic countries in Northern Europe, NZ amber or gum also derives from tree resin. Kauri gum was used to manufacture paint, varnish and linoleum. The market for kauri gum decreased from the 1930s with the advent of synthetic resins.

The colour of the resin varies—the fossilised gum is paler, harder and more translucent than younger samples which vary from pale yellow to red/brown to even black.

In the early 1900s thousands of ‘gum-diggers’ first probed the ground and swamps with long sharply pointed spears to locate the solidified lumps of resin which were then dug out after having been buried for possibly thousands of years. One photo of the period shows a group of Dalmatian (Croatian) diggers, of whom there were reported to be 1,000 engaged in this pursuit. An estimated 20,000 Maori and Europeans dug for kauri gum.

Gum masses sometimes form in the branch forks of standing kauri, however ‘crutch’ gum can also be collected after a period of months by slashing or scratching this juncture. Exports of gum peaked in 1900 when in excess of 10,000 tonnes were sent overseas. 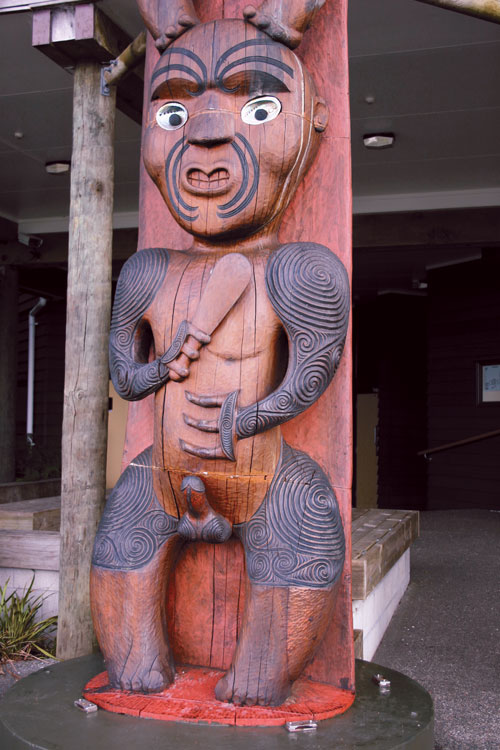 With carbon datings of 30,000–50,000 years the timber excavated from swamps in the Northlands area is the oldest recognisable wood found in the world and would not have been preserved had it not been trapped in still waters by some ancient natural catastrophe. Water in motion would have leached the extractives which preserve its woody identity, leading to breakdown.
Ancient Kauri Kingdom Ltd2 excavate this prehistoric wood and market it as the world’s oldest workable timber. Their showroom offers a range of furniture and craft items for visitors. Rose & Heather3 are a New Zealand company who manufacture a range of contemporary ‘classic’ furniture from ancient kauri.