I became aware of Olivia Faire a couple of years ago when one of her fans in the UK sent me a photograph of an example of her work, a marquetry bird. It was striking in every way; the design, selection of materials and masterful execution.

Olivia was raised in a creative household, her mother a couturier and her father an architect. She completed a BA in Fashion Womenswear at Central St Martins in London before she took up her interest in marquetry in earnest. Olivia works from her studio in the UK, from where she talked to me by telephone. 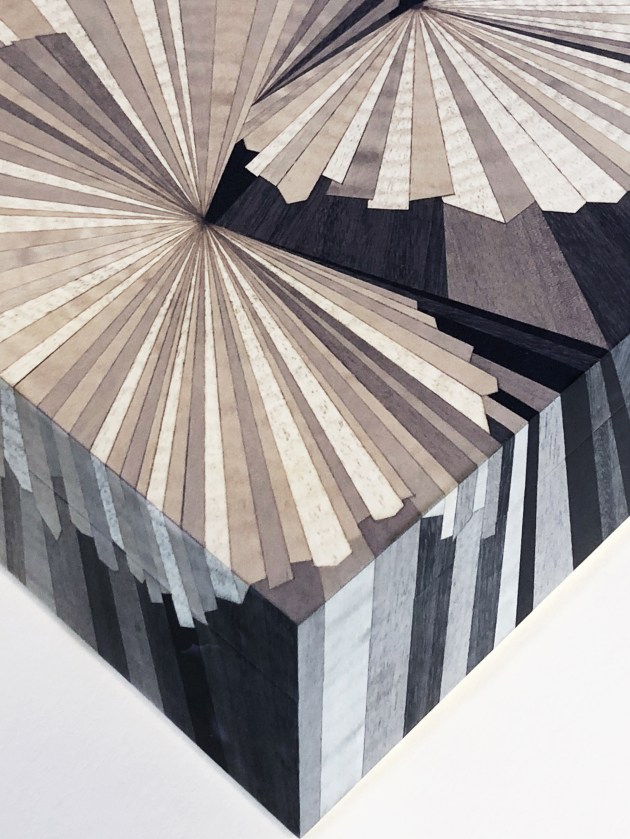 Detail of Olivia Faire’s Crystalline Box. ‘All of my designs are hand drawn with pencils and paper but then transformed into digital drawings for the laser cutter.’

When were you bitten by the marquetry bug, and how did that come about?
I became aware of marquetry during my childhood, being willingly dragged around many museums and beautiful houses all over the world. I just found it fascinating, the labour-intensive nature of it. I thought that the work and effort was worthwhile considering what it accomplished – I loved the minutiae. 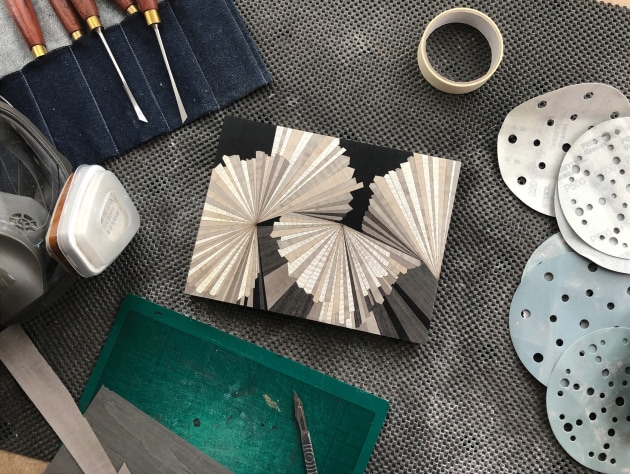 An in-progress view of a box featuring a Crystalline series pattern.

I just had the idea that I wanted to make the willow table; it was really out of the desire to make the idea that I started. I’d been hunting for something that could give a lasting sense of joy, of longevity to somebody, something that could be passed down. I’d been disillusioned from doing the fashion course; it just felt so wasteful to me. There’s so much purpose and incredible craftsmanship that goes into fashion, but it wasn’t my outlet. It was through the process of making the willow table that I became completely hooked on marquetry. I realised how much scope there is in this craft. 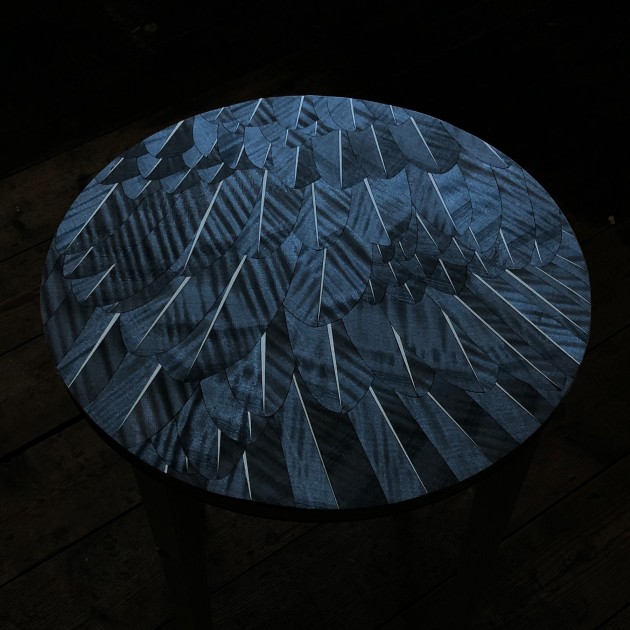 An example of work from Olivia Faire’s Feathers series.

Did the suite of skills you developed during your studies at Central St Martins prove in any way to be transferrable to the world you’re engrossed in now?
Yes, it was very transferrable. They knew at my interview that I wasn’t going to do fashion, they said that to me, but they were just interested to see what I would do. I had incredible tutors and they just kept pushing the ideas. Everything that I learned there I still practise today, but in wood. I’m still using the pattern cutting and the way of thinking that you would use to produce fashion. 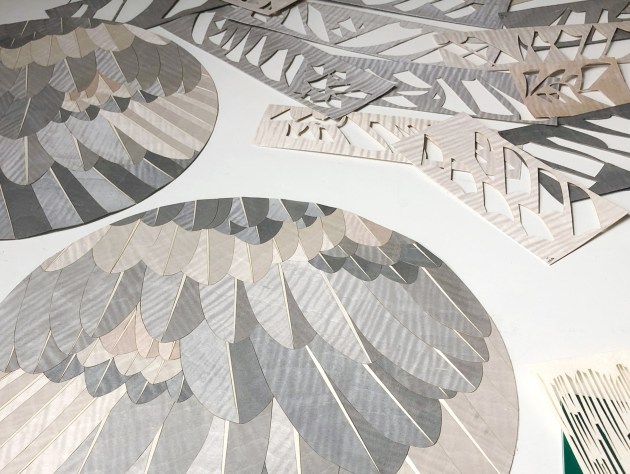 How long had you been making marquetry before you formed the idea of parlaying your interest into a career path?
When I started, I didn’t have the know-how, I was teaching myself since I didn’t have the money to do a course. The idea for the Thorn Clutch arrived early on and I started considering how I could make everything work for me. I started making the bags because I didn’t have the skills to make boxes to the level expected of a luxury box (I do now) and I thought I’d do something totally ‘off book’ which no one could say was wrong, because it hadn’t been done before.

Through doing the bags I acquired the skill to start making boxes. Thoughts about the viability of a career in this field didn’t affect my determination to have a career. In the last couple of years it’s become a viable thing for me to do full time. The bags have become a calling card to show what I can do with design. Right now I feel that I’m at the very beginning of what I can produce and what I will produce. 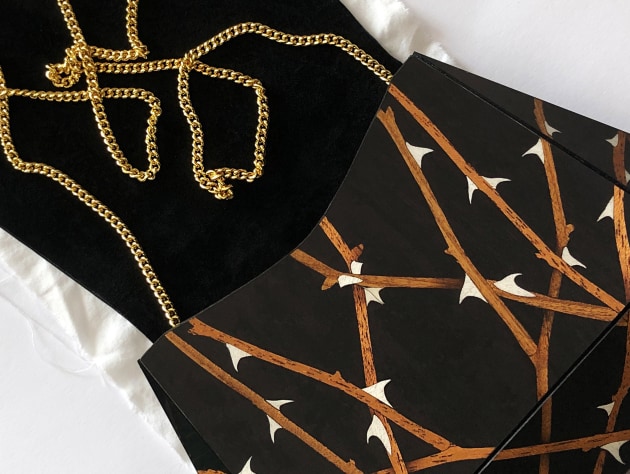 Above: ‘The Thorn Clutch was the bag that started it all. This design formed the basis for my early prototypes. (Sawing) is the most terrifying part of the bag making process as there is no erase or quick unpick...’

Have you found ready acceptance of and interest in your product in the marketplace?
Yes, I have; it’s been very gratifying. Initially it was considered too ‘craft’ to be luxury fashion and too ‘luxury fashion’ to be craft. 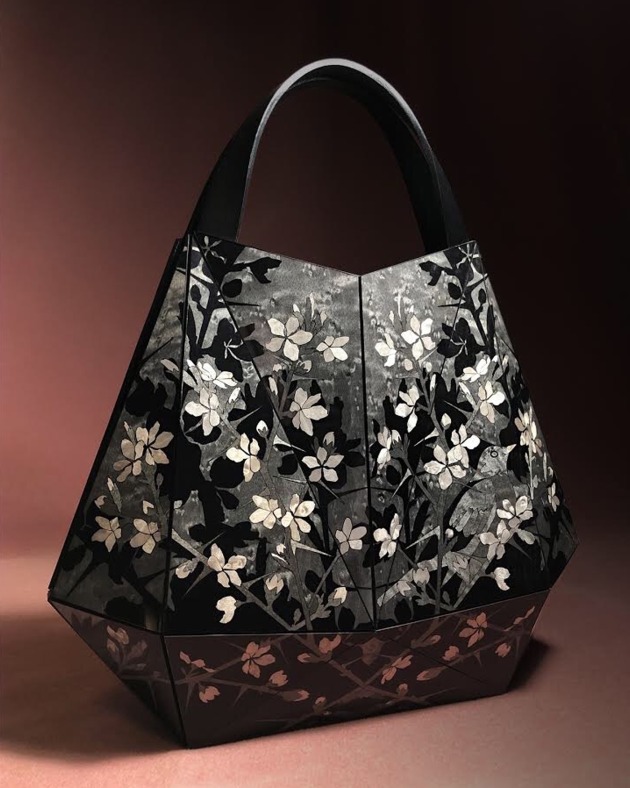 Maintaining a social media profile takes time and effort, but the benefits of doing so are not easy to determine. Your Instagram page is as well crafted as the work you make and tells your story in an engaging way. Has social media been an effective way for you to reach your market?
Yes it has. Incredibly, so much has come out of Instagram, the word of mouth which comes from that, it’s led to connections. It’s a slightly mad thing and I’m really grateful. 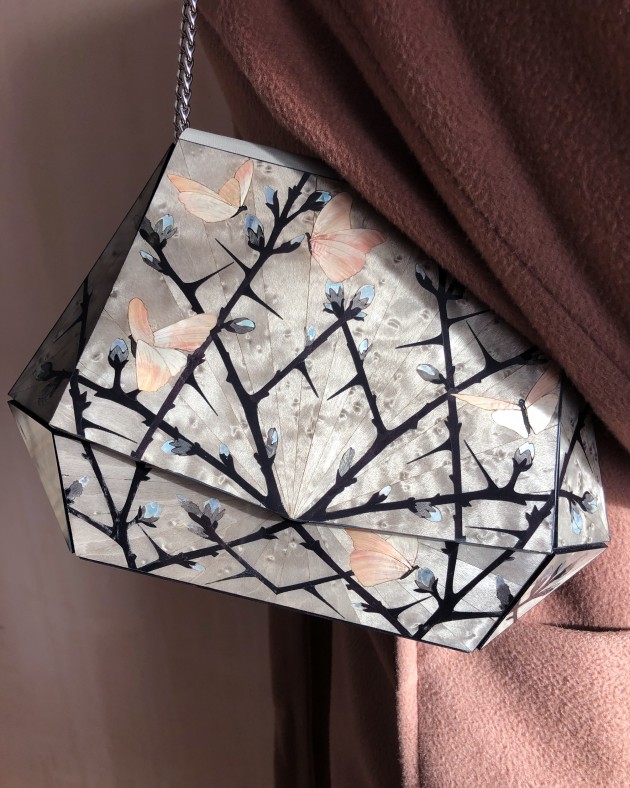 Allium Clutch, so named for the garlic skins used for the butterfly wings.

At what point did you decide to start using a laser cutter in addition to the other veneer cutting methods you employ?
I started that after my first piece. I’ve self-funded my whole studio; each time I received payment I’d think, ‘there’s the laser cutter’ and so on.

I’m fascinated by your use of garlic skins in your work. Is there a story behind that?
You know how happy accidents happen. I was struggling to create butterflies’ wings and doing it in wood just seemed so heavy. I went away to cook, to cook out my frustration I suppose. The garlic that I had, I broke open and inside the skins were just electric pink, just so exactly what I was looking for. They had that delicacy and other-worldly quality that I was hoping for and they reflect like mother of pearl, or silk. 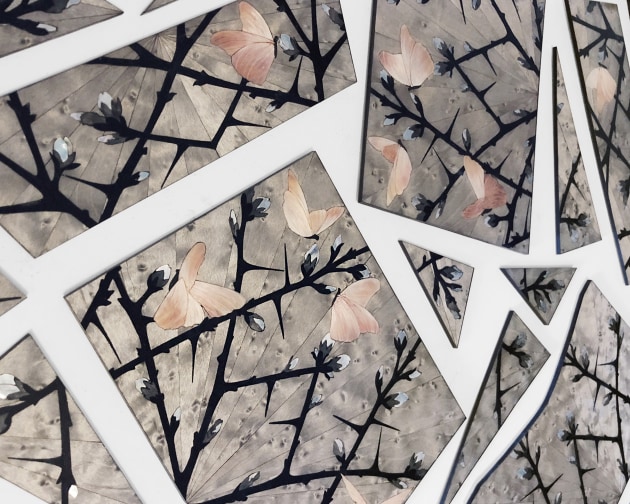 Segments of the Allium Clutch before assembly.

What are the major sources of inspiration for you in your work?
I’m hugely inspired by modern architecture and geometric shapes; I really love the jarring worlds of sharp lines and natural forms. I quite like trying to design to create a feeling with the veneers so that instead of there just being a beautiful surface, it has a life, its own presence. I find huge excitement in taking the wood to a place where it probably shouldn’t really be. 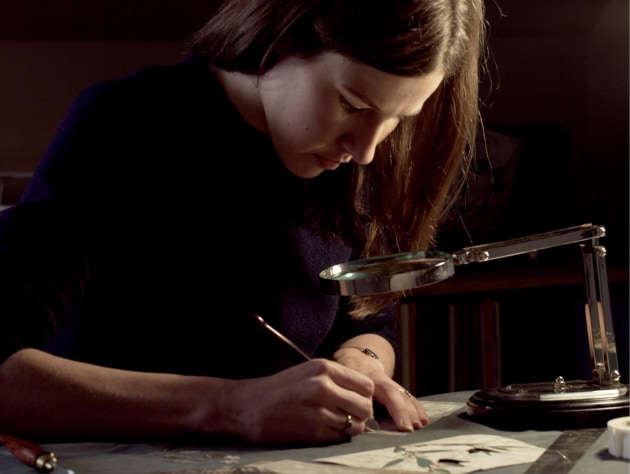 There’s certainly an almost magical dimension to marquetry, to what can be conjured with simple materials.
Yes, I feel like I’ve finally made friends with the veneers. I feel like that would be a nice way of putting it, because they respond to everything, any slight change in moisture or temperature. Trying to tame them, I think we’ve had a lot of arguments over the years. Now I think we’re talking exactly the same language and I feel like I can really bring to life exactly what I’m imagining. When I see a piece of wood, I see its design and the design I want to make with it. It’s working both ways now; instead of me trying to force a design out of a certain piece of wood, I feel like I’m getting a conversation going with the timbers and that’s really exciting.

I’m also using reclaimed timbers, both because I enjoy the idea of breathing life into things that would otherwise have been burned or discarded and because it’s a very savvy way of being able to make work. For the first time I’m actually able to choose veneers and really design freely as opposed to just having a veneer and trying to force any design I might have out of it, so it’s a really exciting time for me to have that freedom to explore what’s actually possible. 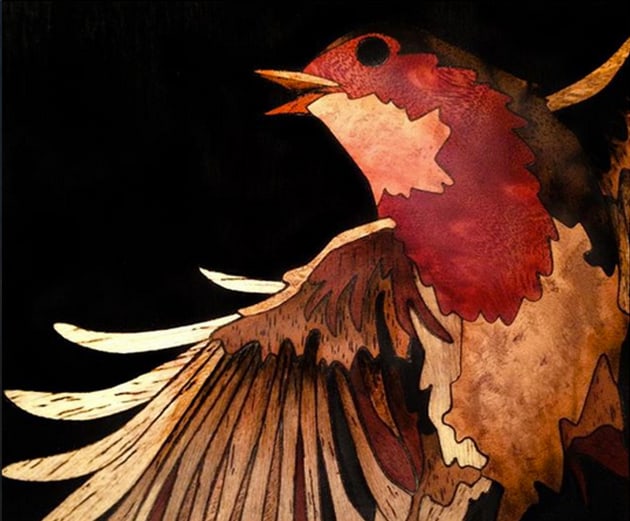 Robin in Flight. ‘Striking in every way; the design, selection of materials and masterful execution’ – Rick Knopke.

Would you please talk a little about how you get your ideas into concrete form?
All of my designs are hand drawn with pencils and paper but then transformed into digital drawings for the laser cutter, there’s a two-stroke process there. I really love the digital stage; I feel like it puts a totally new eye on things, like the difference between painting somebody’s portrait and taking their photograph. It flattens your mood a bit in exciting ways and I can make changes there too, but I really love having the initial freedom of the hand drawn otherwise I think everything would get far too tight and involved in the geometry of everything. 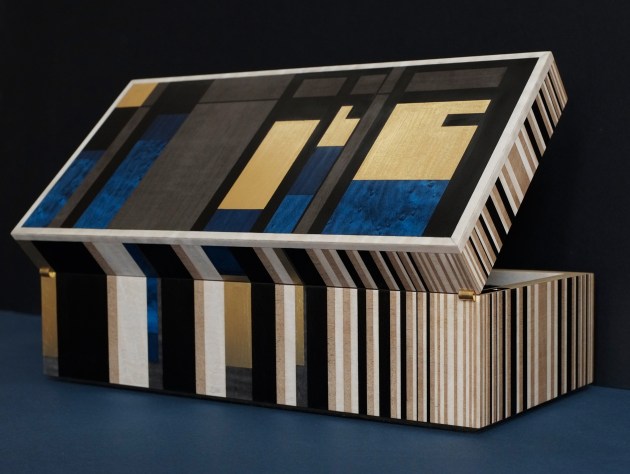 After making bags and clutches, Olivia Faire acquired the skills to make luxury boxes like the St Pauls Box shown above.

Do you have the urge to work at a larger scale?
Absolutely, I am just about to launch my first collection of tables. This feather marquetry design uses varying grain orientations to create the illusion of movement and depth within the piece. To further enhance this effect, I have been custom dyeing the veneers subtly different shades before cutting. I have found this creates a striking effect when the table is in both hard and soft light.

Rick Knopke is a West Australian marquetry artist and furniture designer maker who was profiled in ‘Through a Contemporary Lens’, AWR#105.