Nathan Day in the Edward Barnsley workshop in 2006.

The March issue 2021 (#110) of Australian Wood Review magazine features West Australian designer maker Nathan on the cover as well as in an interview which looks at how he has built a career in fine woodworking. The interview refers to a story we ran about Nathan some 15 years ago in which he describes his experience as a trainee in the Edward Barnsley workshop in the UK.

I was given the chance last year to work in the Edward Barnsley workshop in the UK* after winning an Australian Overseas Foundation Scholarship. After seeing a portfolio of my apprenticeship work, James Ryan the workshop manager and designer offered to apply for my work permit and put me on as a paid trainee for a year. I was to be the first paid trainee and the first Australian to be trained in the Barnsley workshop since it started in Hampshire in 1923.

My first piece was an octagonal breadboard and for this job I would need a well-tuned No.7 plane. This was a tool that I had never used before and I have since found out just how useful and versatile it can be. I was to use only the No.7 and a handsaw to produce the finished piece, no sanding before oiling, straight off the plane.

Flattening and polishing the sole of the plane was followed by grinding a slight convex curve in the blade and lightly hollow grinding the back to allow for easier flattening. Then sharpening the blade using Japanese waterstones and micro-finishing film before adjusting the mouth and setting the blade.

Preparing timber by hand seemed such a strange thing to do when there was an immaculate machine shop in the next room. It was also hard work. I had to take off 10mm with the plane to get the twist out, rough the shape out with the saw and then fine-tune each side until I had a perfect octagon. This was hardcore woodworking. Each side then had a 25mm chamfer on the underside and a slight round to soften all the edges. After a day and a half it was ready to be stamped with the official Barnsley stamp and its first coat of oil. A truly proud moment.

The next few pieces continued in this tradition. Firstly two sets of bookends with hand-cut through dovetails, one with a nice little mitre on the front and back corners. Hand-cut dovetails? Again an old concept that was new to me. I have cut hundreds of complex dovetails in the past using a router, lapped dovetails that are only seen on the face and can be fitted beautifully by tapering the backs slightly, but when they come through the other side they are truly unforgiving and require a new level of skill and precision. It was a sad moment when I was asked to cut the pins off and have another go, twice. Two weeks later though, two sets of bookends with absolutely perfect hand-cut dovetails.

Next was a small stool with angled ends and through and wedged tenons in olive ash, followed by a beautiful mostly hand shaped table lamp and a dovetailed stool. I then made a number of wall mirrors in various timbers and a load of breadboards for the workshop’s annual open weekend in May. So much care is taken in every piece and every detail that I was even shown how to solder the joins of the hanging wire on the backs of the mirrors. Just a nice little touch that shows that little bit of extra workmanship.

This whole time I was writing notes and taking a lot of photos. Notes on little things I had been shown, clever little tricks and ideas, new techniques and new products. Photos of the craftsman’s machine setups or a clever jig that they were using. I was going home every day feeling as though I had just learned the most useful thing ever only to go back the next day and come home feeling the same about something else.

Many of these skills had been developed, passed down and further developed over nearly 100 years by the craftsmen in this workshop, and I was lucky enough to be on the receiving end. There was so much valuable information here that I just didn’t want to forget anything, so notes and photos were my way of ensuring I didn’t. 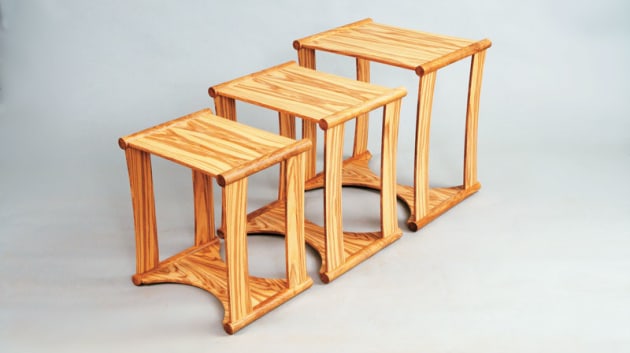 Nest of tables in olive ash

With my practice pieces out of the way I finally got to build some commissioned pieces of furniture. My first project was three nests of three tables and two bedside tables based on the same design, with matching table lamps. These were in assorted timbers including rippled sycamore, olive ash, brown oak with elm detailing, and Macassar ebony with sycamore detailing. It was quite nice to be using such a variety of timbers when I was used to using only two or three, with about 90% of the furniture I had built being in jarrah.

I learnt a lot on this project. It introduced me to veneering and lippings, of which I had had little experience, a lot of operations on the spindle moulder with some advanced jig making, and even a little steam bending. Each table had four curved legs which were laminated and veneered using a former. This technique is one of the things that I have been particularly excited about, something that I will use to produce and develop my own designs in the future.

The next six months in the workshop were spent building two pieces of furniture commissioned by a Lord and Lady for their London home. The games table in American cherry shown below was to have a double-sided top; one side veneered for use as a sitting or breakfast table, the other side with a baize surface for playing cards. It would also have a hidden drawer, a custom made lifting mechanism for the top, and a hidden handmade catch. 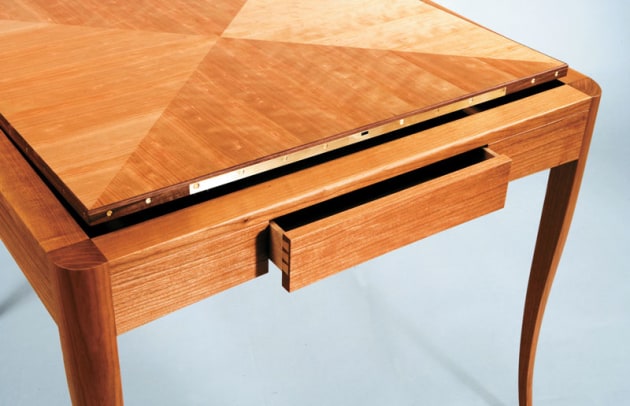 The second piece would be a chest of five drawers in rippled sycamore with a walnut inlay. This piece would really introduce me to fine cabinetmaking. The drawers would range from 175 to 230mm deep and 365 to 750mm in width, with hand-cut through dovetails in the backs and hand-cut lapped dovetails in the fronts. Traditional drawer slips and muntins would be used, both with a fine-scratched inner detailing and cedar of Lebanon drawer bottoms. Inlaid Brazilian rosewood runners and traditional rosewood drawer stops were specified.

Every new piece of furniture begins with a 1:10 scaled drawing by James Ryan. From this the maker produces a series of full sized working drawings and develops the cutting list. The timber for the job is cut out up to a month before work begins and brought into the workshop to acclimatise. Timber may also be dressed oversize so any natural distortion in the timber can be machined out once construction begins. 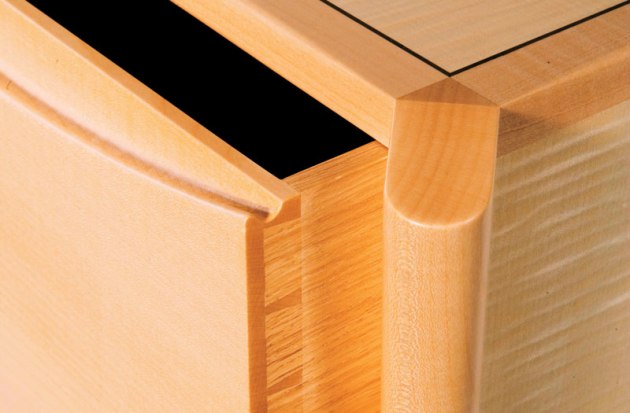 Detail of drawer chest in rippled sycamore with walnut inlay.

Both these pieces would be delivered by Christmas 2006 and work on them began in June. I made the games table first so I could ‘practise’ making a small drawer on this piece, rather than being thrown into the deep end by making five large drawers.
My last 12 weeks in the workshop were spent building a jewellery box and a beautiful chair in American walnut. Building a chair using Barnsley methods and techniques was of great value to me. 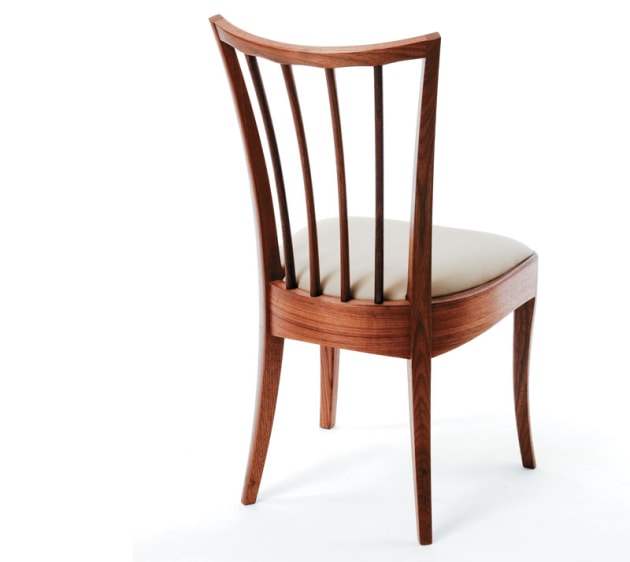 Walnut chair: ‘The combination of curves in the seat and crest rails and the curve and shape of the back bars hit all the right parts of your back. The chair was described by many in the workshop as like sitting down and getting a cuddle.’

The year was probably the quickest of my life and the most enjoyable time I have had as a furniture maker. I was privileged to have the chance to learn from some of England’s finest craftsmen in one of the country’s most sought after furniture training workshops. I feel it is now my responsibility to push things forward and share what I have learned with others here in Australia and make some beautiful furniture.

The experience was career inspiring and introduced me to a new level of quality and design. I have an amazing new set of skills that I can develop further and adapt to our environmental conditions and our timbers. I have returned with a new found energy and motivation to start working for myself, putting together many years of sketches and ideas and developing them into new and exciting completed pieces of furniture.

I have rented workshop space in an established workshop in Yallingup, WA, and have put together a portfolio to show potential clients what I am about, and to tempt them into placing an order. I am also teaching furniture making at TAFE two nights a week.
In WA I have access to a great supply of local hardwood, but I have never liked being limited to two or three different timbers and want to start using other native timbers from around Australia. My time overseas showed me that using many timbers has huge benefits for design and from a client’s point of view.

I am particularly excited about having the chance to one day offer work to other Barnsley trained craftsmen. Given that I hope to eventually have enough work to be able to employ and train people, the experience that everyone will get from spending time with these craftsmen will be immense.

* The Edward Barnsley Workshop in Froxfield, Hampshire UK keeps alive the ideas of the Arts and Crafts movement which Edward Barnsley played a significant role in continuing as he established himself as one of the leading designer makers of his time. His father Sidney and uncle Ernest had been inspired by William Morris and embraced his radical ideas. Today the workshop builds new and contemporary one-off pieces using a combination of traditional and modern techniques while utilising the most up to date technologies. For more information visit www.barnsley-furniture.co.uk

Subscribe to print and digital editions of Australian Wood Review