With 50,000 years behind them, the Yolngu people of Arnhem Land in Top End Australia well and truly have their own traditions of making things. Wood, stone, plant fibre and the earth itself have continuously felt their touch and been transmuted

Thirty years in business might be a pinpoint in time by comparison, but it is a significant portion of one man’s life. That’s how long it took Mark White to transform a garage- based enterprise into an award- winning construction, fitout and manufacturing company1 that now employs a hundred people and turns over $50 million annually. But a few years ago he decided he wanted to give back.

Initially Mark looked at supporting overseas projects, but then thought: why not start at home? He connected with ALPA, a not for profit Aboriginal corporation that runs community stores, offers employment and training schemes and together, in 2015, they built a factory in Milingimbi, an island off the coast of East Arnhem Land with a population of 1200. To get there, you fly to Darwin, then take a charter flight some 500 kilometres east.

At the outset, master craftsman Rob Crisfield came on board with the plan to create a furniture making set-up, and continues to manage the factory and train the team of six who currently work there. Rob works six weeks on and flies out for two weeks off.

For an island based industry transport costs will always be significant. Materials are brought to Milingimbi by barge and finished product will leave the same way before arriving in Darwin, where it can go by road to Melbourne, Sydney or wherever. Fortunately backloading rates make this more affordable however overall costs are high. ‘Even to get machine blades sharpened, they have to be put on the barge to Darwin and then brought back’, said Mark. ‘Everything we do is hard, right down to getting packing materials. There’s all kinds of logistics, but we have got a lot of it sorted now.’

Above and below: In progress and detail photos of Fire Sideboard, designed by Alexsandra Pontonio and made by Manapan Furniture. Memory of imagery retained from considerable time spent by the designer in Arnhem Land inspired the ebonised tambour and ‘branch’ shaped componentry.

The furniture and products that Manapan produce tell a multi-layered story about the network of people who design and make it, and the materials they use. But telling that story relies on making it all add up in economic terms and that has supported the drive to create high end, high value products.

To this end Mark has assembled a group of Melbourne-based architects and designers who have created designs that are now manufactured by Manapan. To date these include Chloe Walbran, Susie Stanford, Ashleigh Parker, Alexsandra Pontonio, Liz Doube and Jon Mikulic.

The criterion Mark set was that each design had to be cutting edge and link back to Arnhem Land and its people. Darwin stringybark, richly coloured and featured, sourced from the Gumatj mill some 300 kilometres away in Nhulunbuy, is the primary timber used. Aboriginal designed and made fabrics, fibre art and carvings have been incorporated to create a body of work that captures a sense of place and collaborative achievement. To date there are lamps, side tables and cabinets which may be viewed online and in a recently established Manapan showroom in Melbourne2.

Above: Making the Art Bench designed by Jon Mikulic which draws directly on Milingimbi design traditions by incorporating five handmade spears as support structure for the solid benchtop which also has dovetail key details.

‘The essence of what we’re trying to do is to create jobs and an ongoing industry. The idea was to create a self sufficient business, one that didn’t rely on government handouts’, said Mark. ‘We want to be able to make products that sell and allow the business to expand.’ 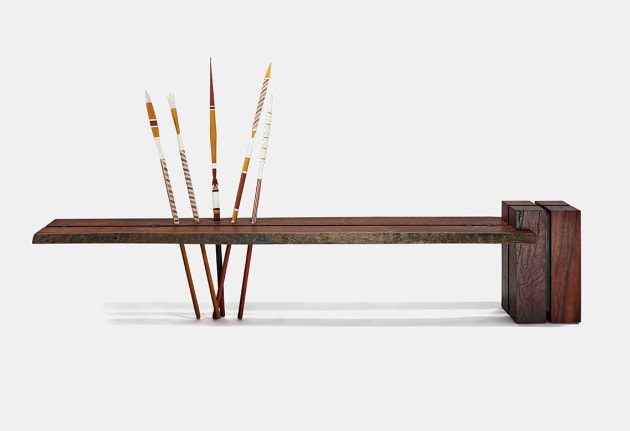 Mark has been approached with offers of government financial support, but that’s not what he’s after. Instead of money, Mark would prefer to receive orders: ‘Let us put one of our pieces in every single (Australian) embassy throughout the world and then we’ll create all this employment. This is about building a business that’s going to be around in ten years time’. 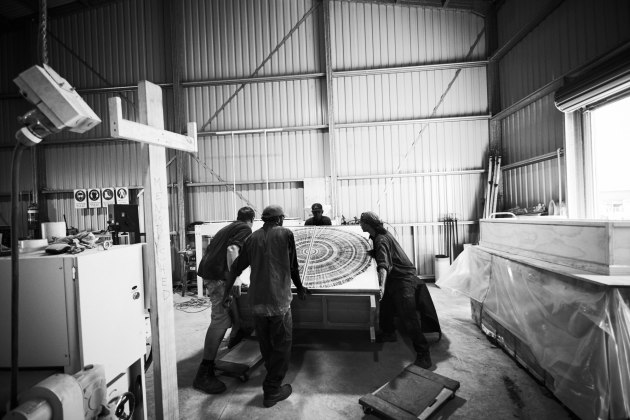 The building and operation of the furniture factory in Milingimbi has locally caused somewhat of a cultural shift according to Mark, but the community response has been positive. It’s remarkable what has been achieved in only two years. 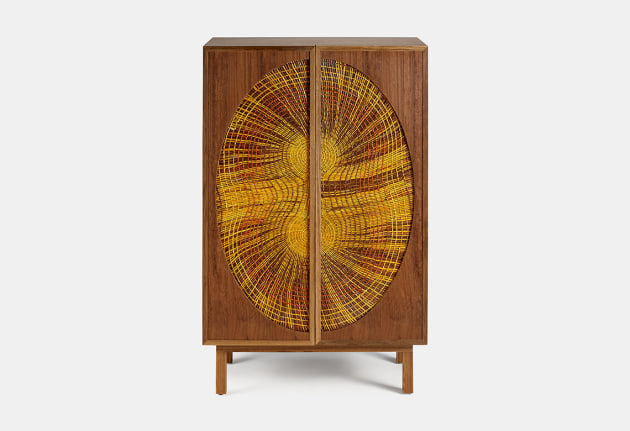 Often when you give, you get. The project speaks of creativity and intensity of purpose. For two to
three days a week, Mark puts his energy into managing the running, marketing and sales of Manapan Furniture. ‘I’m getting so much out of it’, he said. ‘It’s like, when you get an order, you punch the air! I just really want to make this work.’ 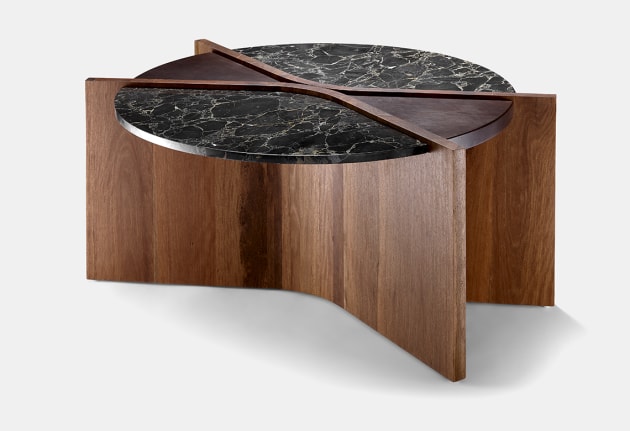 ‘In 12 months time I’d like to think we’ve got a modest amount of orders coming through, as well as a few bread and butter jobs such as the church pews and coffins we’re currently building. 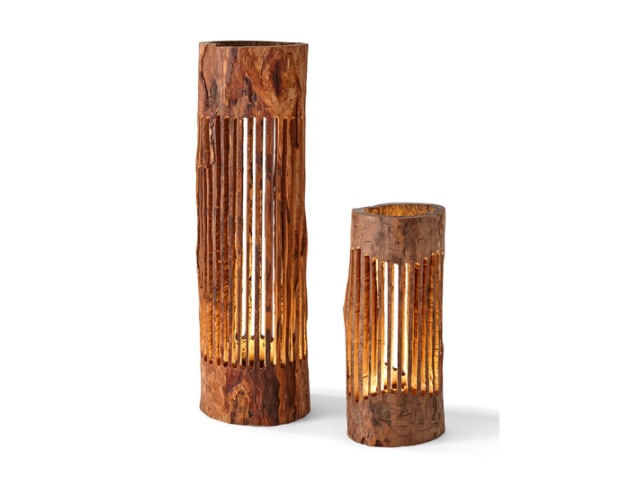 Hollowed out by fire and then carved, Crocodile Lamps were designed by Suzie Stanford to recall the glow of Milingimbi campfires or ‘bush TVs’ as they commonly referred to.

We want to put together some retail partnerships in capital cities. But one day I would like to think the business is wholly and solely run from Milingimbi’, said Mark who plans to ultimately write himself out of the picture.