Woodwork came later into Leeroy Reading’s life, but when it did, it completely took over – he was smitten. Growing up, manual pursuits were actively discouraged by his father, a fitter and turner who had wanted to be an academic, and who felt there would also be better paths for his son.

It wasn’t until after Leeroy bought his first home and started renovating it with the help of carpenter friend, that he discovered how much he loved the hands-on skills he had an obvious aptitude for. Leeory went on to do what he calls an ‘unticketed apprenticeship’ with his friend before then starting to make furniture.

The catalyst for moving into the fine woodworking realm was the impending birth of his daughter. The crib that he made her fuelled another ‘apprenticeship’, this time self-directed. Once the bug had bitten, Leeroy garnered every piece of information he could about woodworking from books, magazines, videos and other makers, all the while wondering how he could take his newfound passion to a business level.

Leeroy was and still is a professional firefighter with Fire and Rescue NSW. In the five days between two 24 hour shifts, he now also now also operates his own bespoke furniture making business. There’s a huge cliff and a waterfall near where he lives and works, and that’s where the name Big Rock Timberworks derives from. 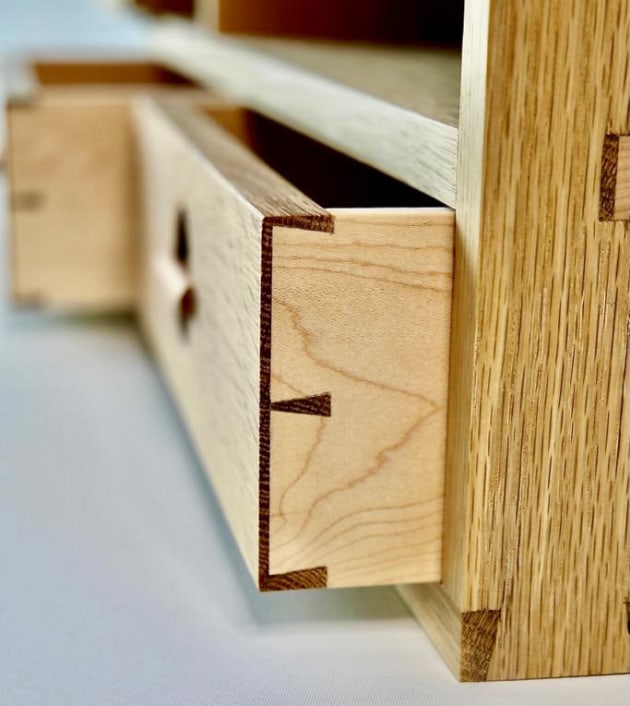 Setting up his business and now moving to larger premises has been an intense process that’s required a significant investment of time and money, but it’s been worth it. ‘I just love every minute of it, and now I want to give other people an experience of owning a piece they’ll have for the rest of their lives’, he said.

For his finalist Maker of the Year entry, Leeroy decided to challenge himself by making a piece with handcut joinery and a delicate kumiko panel. The carcase is made from American white oak with fiddleback blackwood featuring on the interior panel. The use of pale jelutong highlights the kumiko door panel. 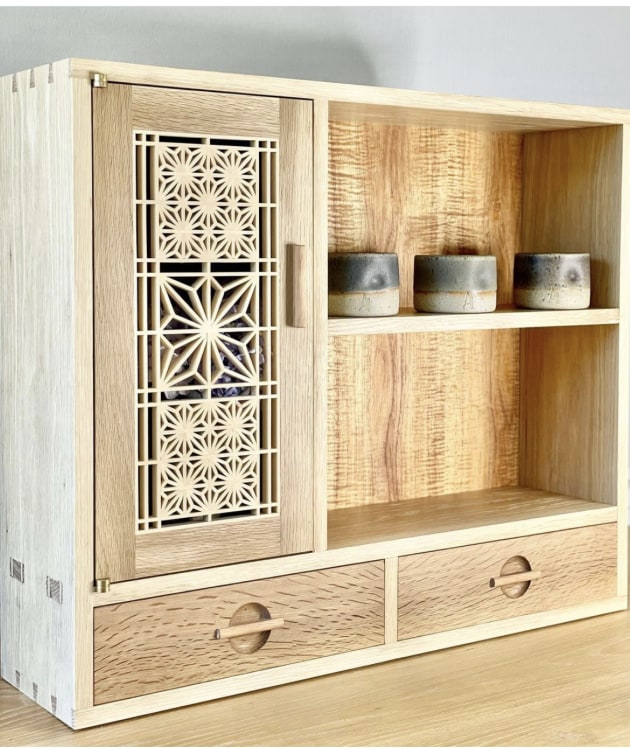 The tea cabinet is named after mentor and friend Tennyson Yu, in honour of their wide-ranging discussions and the encouragement he gave Leeroy to follow a new creative path. Drinking tea while they chatted was part of their ritual.

We asked Leeroy if there were any parallels between fire fighting and woodworking? Or were there differences that drew him in? ‘I would say both are true’, said Leeroy. ‘Although on a different scale, the true camaraderie between fire fighters also exists between woodworkers. Firefighting can be a hard job and you can be under intense pressure and that shared experience brings people together. The same applies to building a piece of furniture. Every woodworker can understand the stress of a glue-up or making a mistake you have painstakingly worked to avoid. It’s the shared knowledge of the difficult processes we undertake that also brings us together with a mutual understanding and compassion. I am fortunate to be a part of two wonderful communities of great people.

‘Where the differences lie are also important to me as a furniture maker; the way you can get into that flow state of creativity where your hands just take over to execute your vision. I have found one helps the other, the creative mindset is allowed to flourish with woodworking, and makes the intense focus and physical strain of firefighting while supporting my community less of a burden.’