Jamie Pappas: In the Neoclassical Style

Above: Library table in the Neoclassical style by Jamie Pappas. Core timbers of Euro beech and Qld maple are veneered in Madagascan rosewood.

My background is 40 years in antique restoration work, the last 15 years of which have included commissions dealing mainly with the English Regency period.

While not having undertaken a formal apprenticeship, I was privileged to work alongside a few skilled European tradesman for a time. However my personal knowledge grew over the years with considerable reading and research, as well as discussions with those highly qualified in their fields. All this has been translated into practical skills through much trial and error.

The inspiration behind the making of the library table shown stems from the influence of Neoclassicism on furniture design in France under Louis XVI during the late 18th century, a style I’ve always admired. Makers of the Empire period, during Napoleon’s reign, continued to embrace this classical style of elegant Parisian furniture, which was adopted by important makers in London (for example John McLean), such was its influence at that time. 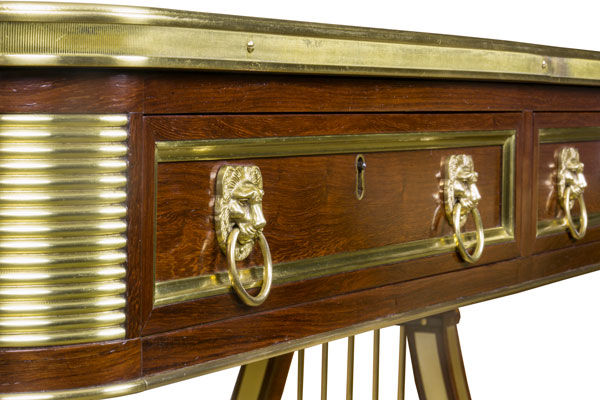 Brass corner mounts were milled and reeded before letting into rebates and cavities.

For me the Neoclassical period represents the height of refinement in furniture making and remains unsurpassed. Design influences of this period were diverse and included the archaeological discoveries of the late 1700s such as Herculaneum and Pompeii, along with the works of Rome and ancient Egypt. In particular, works of this period feature exquisite detailing of veneers and marquetry inlay.

I began on this personal project about four years ago during out-of-work hours, although the idea had presented itself sometime before. Examples of Neoclassicism in English antique furniture catalogues formed the initial idea which was followed up with full scale drawings and measurements. Without having the actual dimensions it took time to draw the individual elements to scale with the correct proportions.

Above: The lyre symbolises Neoclassicism to the full. It was incorporated into furniture design in varying forms as a representative feature of the ancient regimes of Greece and Rome.

Library tables were often designed to be a focal point for display of rare or early manuscripts and publications. For this reason they were sometimes higher than conventional writing desks, which were on average, about 770–800mm. Thus the library table could be used from a standing position rather than a seated one, as is the case with this example.

The curved and ribbed brass corner mounts were hand cut on a milling machine, as were the tapered and reeded brass mounts for the splayed legs. Positioning these brass mounts proved challenging as did the placement of the 1.5mm U-shaped brass inlay on both sides of the lyre support. After the waste veneer had been chiseled and scraped out, the brass sat snugly in its groove and both sides were pressed simultaneously with araldite.

The top section of the lyre with its central brass anthemion is connected to the lower U-shaped curve by two tenons. Here the core timber has its grain running horizontally while in the lower curved section it runs vertically. The veneering of all four faces of the curve gives much additional strength. 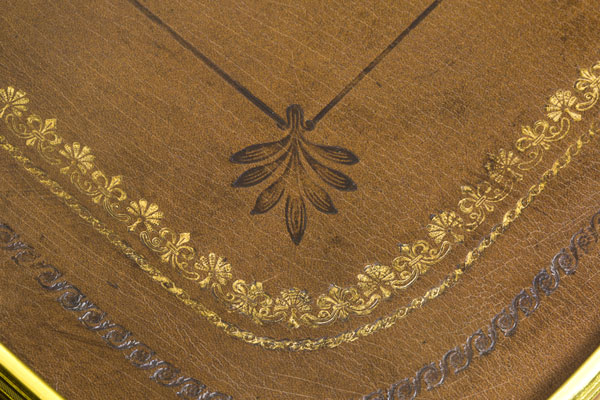 Above: The hide was hand coloured and embossed with gold by a UK artisan to the maker’s design.

The centre block connecting the two splayed legs also has its core grain running horizontally. The sides of the block house the dovetailed joints in the legs. A steel brace 5mm thick and moulded to shape has been let in to the underside of the legs and centre block for added support.

The core timbers are made from steamed European beech and Queensland maple. The drawers are made from old cedar. All polished surfaces, except the turned stretcher elements, are veneered in 1.5mm bandsawn Madagascan rosewood (unstained), and finished with button shellac and Liberon beeswax. The brass handles were bought in France and were made using the lost wax method.

While this one-off project will not be repeated, it’s one that has certainly deepened my understanding of a style of furniture I much admire.