In Sight: The Work of Duncan Meerding

Life’s ironies don’t let up. Left legally blind with only five percent of his vision some 15 years ago, Duncan Meerding, 32 has become a leading light.

Duncan is a lighting and furniture designer/maker. He operates his own business producing his own designs and commissions, predominantly in timber. He has a workshop, machinery, power and hand tools, and like many others makes, markets and sells things.

Last year was a watershed. His Stump Light design won Best Floor Light at the 2018 London DARC Awards over and above entries from lighting designers from all over the world. And that was the judgement of not one small judging panel, but of a strictly vetted peer-to-peer system where only lighting and interior designers as well as architects are allowed to vote. Over 6000 industry professionals voted for Duncan’s design. That’s what you call validation.

But it gets better. Duncan was able to accept the award in person because he was already in Europe for the opening evenings of the Venice Design 2018 exhibition, as part of the Venice Biennale. He was one of 60 invited to display work in an exhibition featuring designers from around the world. To put that into perspective, the last edition of Venice Design had over 200,000 visitors. 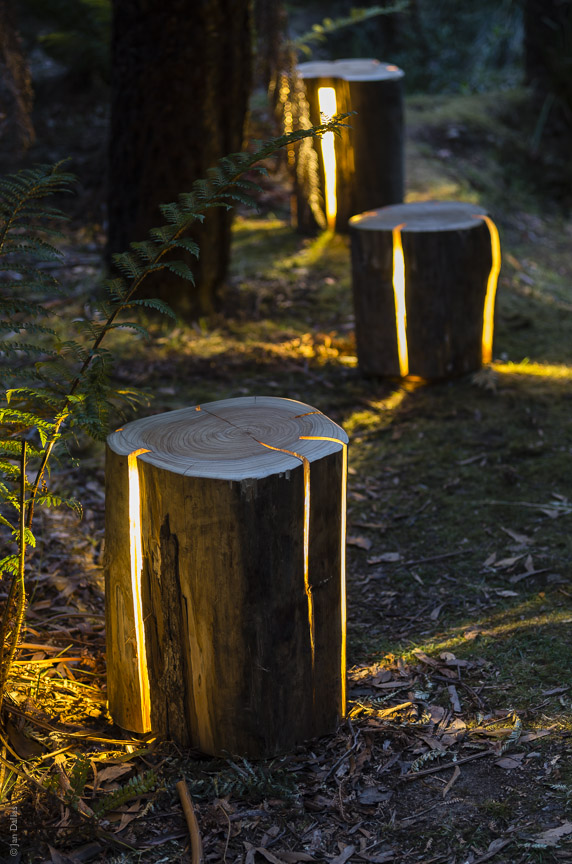 Duncan Meerding’s Stump Lights: ‘The relationships between light and shadow and light dispersion are also integral to my design process.’ Photo: Jan Dallas

Last year, Duncan’s Stump Lights were installed in Google’s new offices in Singapore and in the Choktaw Cultural Centre in the USA, and some of his other designs featured in projects in Switzerland, Sweden, Denmark and Bahrain.

Duncan’s lights are shining all over the world and perhaps people are captivated by them because of the innate and personal message his designs convey.

With its randomised light patterns that disperse and throw light to the side through its cracks the Stump Light reflects his own situation. Just as Duncan’s remaining vision is concentrated around the peripheral fields, much of his work reflects the alternative sensory world in which he operates, with an interest in expressing how light performs through and around objects.

Another side to the story of Duncan’s work is his commitment to sustainability in design – all of his log-based designs are made from salvaged wood which would otherwise have been burnt.

Sound construction is another of his priorities: ‘Furniture and lights should be designed to stand the test of time. Anything less is irresponsible and is bad design’, he says.

But what about the human side of sustainability? It’s common to talk of the difficulties of making a woodworking based business financially and physically viable. On this ground Duncan is a success, no matter how little he or anyone else may recognise that in the throes of their daily life slog. He is an award- winning designer and maker whose work is becoming internationally known through trade and consumer shows, public speaking, consulting and high profile commissions.

This year in March Duncan will speak at the Sydney Design festival. In the following month he will exhibit at Euroluce, the world’s largest decorative lighting trade show alongside such people as David Trubridge and companies such as Greypants and Ango Lighting. He will go on to the UK University College London to consult on workshop facilities for visually impaired people.
It must go back to his endurance, persistence and inner strength. It also goes back to the authenticity of his designs which truly portray his vision of the world.

In his youth Duncan was an avid maker. Skipping forward to 2007, while studying for a humanities degree at the University of Tasmania, he began taking elective units in furniture design. He was ‘bitten by the designer maker bug’, but it was, he admits, ‘an unlikely career path’ for someone diagnosed at 18 with Lebers hereditary optic neuropathy (LHON), someone who now is legally blind.

‘When my vision first went I didn’t think I was going to be able to make, let alone design anything ever again. So when I heard about the Vision Australia Assist program in 2006 I went over to Melbourne and did a crash course, learning some of the basic techniques of how to make things safely with low or no vision.

‘From this course I was able to enrol at UTAS, learning from Linda Fredheim, the head of the department at the time. It was through this course, with the open minds of the staff and the other students, that I continued to learn.’

After graduating, Duncan gained a Springboard scholarship to the Designed Objects Tasmania (DOT) facility in mid-2010. ‘This year- long program helped launch me into a career as a designer maker and I stayed on as a full time studio holder at the facility until the beginning of 2017. I learnt a huge amount of practical and business skills, from maintaining machines to marketing my work.

‘Being in a collaborative environment with open-minded people at DOT gave me the confidence to branch out. I now run my own workshop facility in North Hobart, creating a range of projects. I use all of the tools in my workshop and I am still heavily involved in the production of the Duncan Meerding Design range.’

So what does it mean, in a practical sense, to be a legally blind designer/ maker? ‘Can I do everything that a skilled sighted maker can do? Well, I can’t make in the same way, but I can work out other ways to do things. This often means extensive problem
solving to come up with different ways to make something.

‘I cannot see well enough to cut to a line. However, this does not mean that I cannot cut out more complicated shapes utilising jigs. I was taught early on to isolate the machine, through emergency stops and/or at the wall. This is not enough though. It is very important to make sure the blade is not spinning, especially when you can’t see it, therefore I will often check with a scrap of wood that the blade is stationary.’

‘As well as jigs there are a range of measuring devices and techniques for setting up machines or measuring a piece of wood. I often will use pieces of veneer as feeler gauges or machine some blocks of wood down to be able to set say the ripping fence on the tablesaw. Having these blocks helps immensely when you cannot read a ruler or gauge on a machine.’

However Duncan cautions others with low vision. ‘I recommend that people seek training through places like Vision Australia, before jumping on a tool. Making things without training is theoretically possible, but having the correct training for safety is important, just as it is for those who can see.’

Learn more about Duncan Meerding at https://www.duncanmeerding.com.au
Links for the vision impaired: Vision Australia www.visionaustralia.org
Woodworking for the Blind http://ww4b.org WW4B is an online community you can join which offers a 100 page how-to manual on making things as a vision impaired/blind person