An interview with wood sculptor Hape Kiddle reveals some of his design influences and work processes.
Photos: Sarah Brown

‘Sometimes I’m simply lost in form,’ said wood sculptor Hape Kiddle, 45 a few months ago when I phoned him to learn more about his work. It’s not hard for the viewer to also get lost in the fluid and meditative quality that defines his work. Spirals and coils that remind of tendrils and unfurling plant forms reveal a deep connection to nature that extends to the stylised whales, fish, birds and even human imagery that also appear.

These are forms that tell stories, that glow with the kind of ‘simplicity’ that only technical mastery and clear artistic focus can achieve. It was enjoyable to hear about Hape’s background and some of the things that drive his thought and technical processes. Here is a summary of some of the questions asked and the replies given.

Who is Hape Kiddle?

When you work in the arts the idea of always defining yourself is always interesting. I actually refer to myself as a maker. I’m more of a sculptor who works in timber rather than a traditional woodworker, but I’m incredibly passionate about timber and trees and making natural forms. 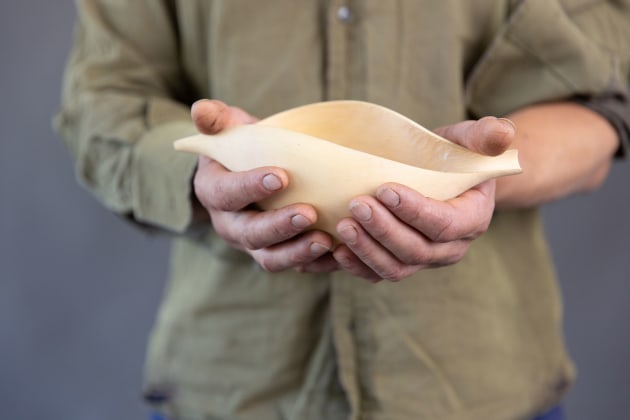 What draws you to wood?

There’s a resonance there, something that just feels connected. I’ve worked in other materials – I’m a goldsmith and worked in jade as well – but everything else is secondary to wood for me.

Have you always carved wood? When did you start?

I’ve been playing with carving since I was six and a half, carving pumice near the Rangitikei and Hautapu rivers where I grew up. I was always fascinated by the traditional Maori carving back home but it wasn’t until I studied furniture making at the University of Tasmania that carving really took off for me. 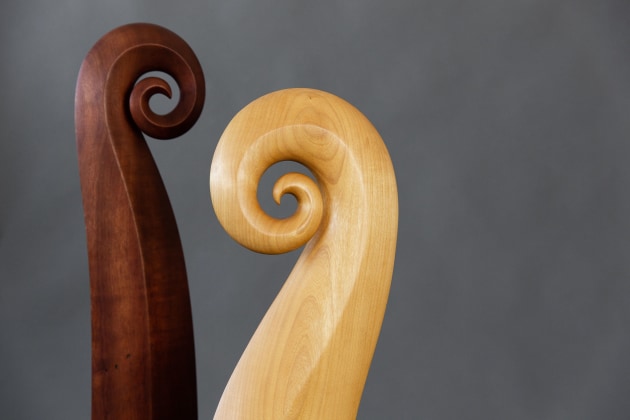 So you studied furniture design but went in another direction?

I was never too enthusiastic about the idea of making furniture but I loved the people at the university and the access to the knowledge. I consider myself fortunate to have come through in the early 2000s when Kevin Perkins and John Smith were teaching at the university. These people don’t arrive at the place they’re at by accident...you’re in the shadow of big trees, so to speak.

Did you go into a related profession after leaving university?

By second year I was already making and putting my work into exhibitions, selling work and doing commissions. It took off rather quickly and I think that was because I’d always been shaping.

Visually and through hashtags, some of your work references the koru or spirals often seen in Maori work. Why is this?

My first carvings were in bone. Traditional Maori fish hooks (hei matau) and hei tiki – those sorts of things. But living outside of Aotearoa there are so many other experiences that have influenced my work. Maori design is what I grew up with and these lines are very much instinctual, they’re in my DNA. But as time goes on, living in Australia, I’ve come to explore a different place, different forms and other stories. The Aboriginal coolamon bowl, for example. For me, this simple form, so absolutely useful in day to day life of the indigenous people of this land, is a wonderful object. A form that speaks of connection to land. 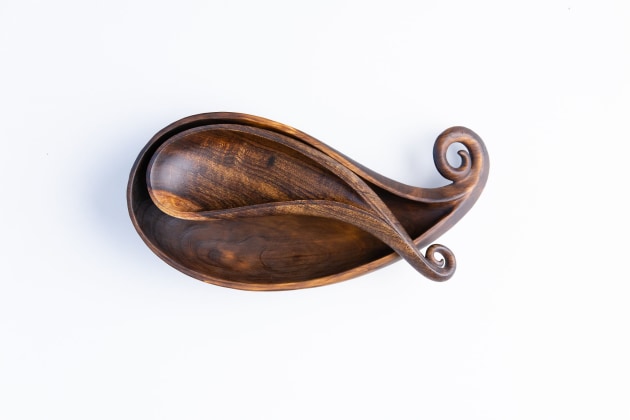 What are you trying to say with your work?

In my work I want people to gravitate to an understanding that they’re of this place. That wherever you stand, if you look after it and engage with it, then that’s your place. I think I’m trying to point to our natural connection with the world and our place within it. I’m horrified about how we are walking on the planet at the moment. We need to lighten off how we use the earth. My work
is all about trying to indicate the value of what we’ve got. I have a very strong philosophy behind my work. I love to indicate those tensions between fragility and strength in my objects and in life itself. And it speaks to people.

On the more technical side of your work, how do you draft a piece? On paper, on a computer, or directly on the wood?
I call it chasing the line. Just get one line running and try to lock the feeling that you’re trying to get across within it. A little bit of music can really drive where a carving is going for me, or a group of words from a poem. With those sort of things in the background I’ll start drawing up an idea, most of the time on large paper, and I’ll change the size of my pencils as to how I’m
feeling and where I want the lines to go, so it becomes a whole game.

I always start with a bit of drawing. Sometimes if I’m doing a netsuke I will draw it from several angles. I will then make a model out of plasticine which I keep in the freezer. I’ll bring that out and make cuts into it using chisels because then I know I can replicate the cuts in the boxwood.

And then there are other times like the piece I’m working on right now which is a representation of that tension between strength and fragility – I just drew two lines on a piece of wood, picked up a chisel and off I went, just trusted what I was doing. But I never design on a computer, it never happens. 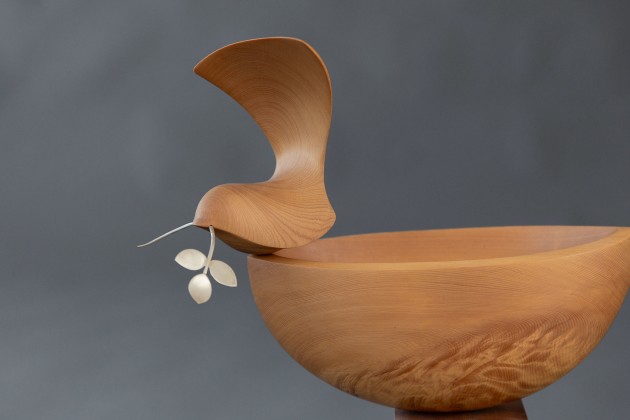 Everyone seems to do it differently – what’s your sharpening method?

I use a completely different strategy when sharpening on a flat stone. I lock the tool into a soft jaw moving vice so I can see my angle no matter where it is. I use a lot of Spyderco slip stones that are about 120mm long, or 1200 wet and dry paper on a flat stick.

When I teach I get students to black texta the entire surface so they can see where they’re touching. With a new gouge chisel first thing to do is to cut a straight line in a bit of pine to the maximum depth of the chisel so you build up the cut to the full depth. Then you put on a bit of compound and you’ve made a jig for honing that chisel. You just drag it back in the saddle of that jig and that will polish the edge exactly every time. It’s important to not let your tools get blunt, it takes 30 seconds (sometimes only 10) to hone a chisel; in Huon pine every couple of hundred cuts, in harder wood it can come down to every 100 cuts.

Is this a hard way to make a living?

Sometimes I think I’m particularly dull in terms of my intelligence because it’s an incredibly hard way to make a living; it’s famine or feast – it really is. It’s taken me a long time from when you don’t wake up those nights at three in the morning worrying. You’re choosing a path that has no market, particularly when you step outside the norm. We sit outside traditional sculptors already.

A lot of people think it’s an easy lifestyle but if you’re going down that path you’ve asked for a much tougher life than showing up nine to five. 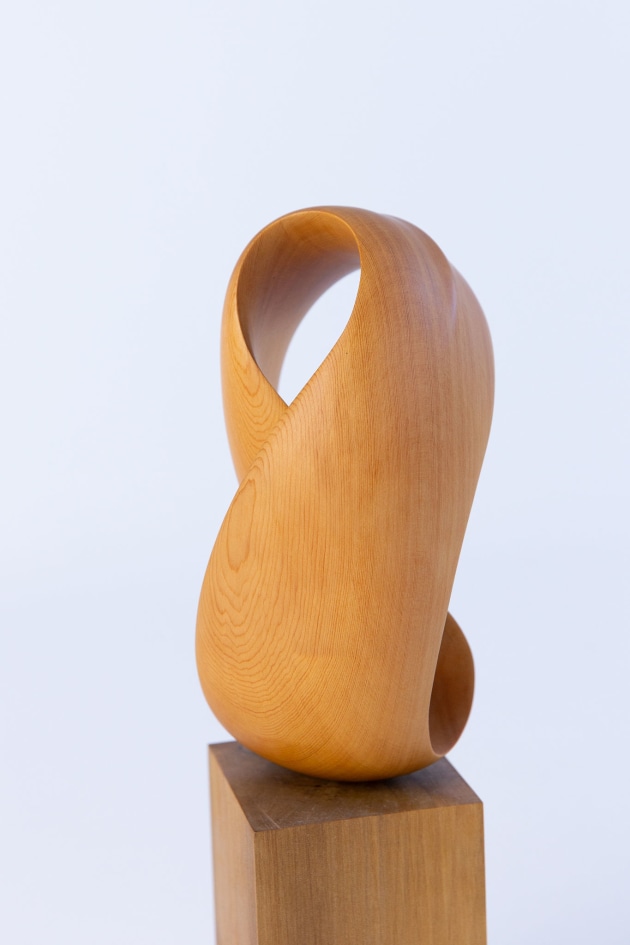 Do you need a disciplined approach to make things work on a professional level?

Time strategies can help. I never work on the same element for longer than 50 minutes without stepping back and then away for
10 minutes. And if I am up against the wall I will actually set time limits, and what I’ve found is that it will usually take a third to half the amount of time to do something than you think. But when you use that timing structure you do not answer the phone, you do not reply to texts, you don’t go and make a cup of coffee (do that before). You need to be one-minded, anything less is not respecting yourself and your processes.

What annoys you when you’re working on a piece?

Disturbances. To get back into the zone is very difficult because when you’ve entered into it, to be pulled out of it is disastrous. That’s why I don’t open my studio to the public any more.

What’s the most important thing to you when working on a sculpture?

A sense of quiet, that sense of enough space to let the piece come into existence.

Do you market yourself, or has the business just built up?

A bit of this and that, but I do subscribe to the theory that you do have to have your followers, not just financially,
but they’re in the conversation with you. There is a sense that I’m making for someone, but I’m not making for everyone. If you get trapped in the idea that you want everyone to like your work or you want to satisfy the masses, well that’s production, and that’s not what I do. I make for a specific group – I don’t know who they are but they seem to appear. 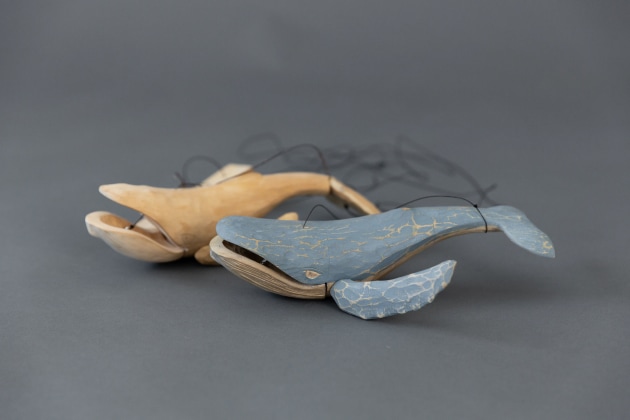 I haven’t made it yet. That’s why I’m not attached to anything I make, because I never made one that I consider my favourite.

Does that mean you’re never satisfied with your work?

That’s part of it. But what drives me comes back to that zen practice, that I haven’t made it yet. It’s like having that piece of cake in front of you, you really want to eat it but someone keeps it on a rope. I’m a classic donkey in a carrot situation.
What happens if I get that carrot? I’m lost for life!

Best tip for other carvers?

Hape Kiddle’s studio is in Griffith, NSW and he has exhibited widely and he sometimes teaches workshops. Learn more at www.hapekiddle.com.au