Edmund Rosenstengel: a master of his craft 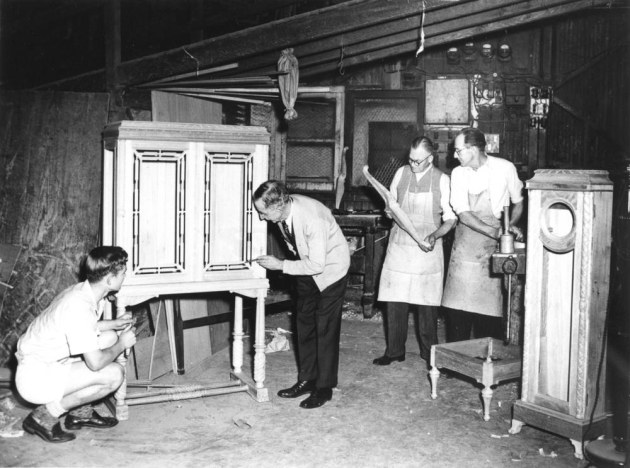 If one was to compile a list of the greats of Australian cabinet-making, I suggest there would be considerable debate as to who might make the cut. The magnificent colonial pieces of Andrew Lenehan might be worthy of inclusion, or perhaps the Art Nouveau inspired masterpieces of Robert Prenzel. Others would undoubtedly prefer the unique contemporary works of Schulim Krimper.

Were the list to be drafted by state boundaries however, there is little doubt in my mind as to who would be chosen as the Queensland representative. Brisbane-based Edmund Rosenstengel, whose talented craftsmen designed and manufactured some of the most enduring pieces of the furniture makers craft between the 1920s and 1950s, retains near legendary status within his home state.

Born in Toowoomba in 1887, Edmund (Ed) Rosenstengel was raised within a family with strong connections to the crafts. His father, an upholsterer, was partner in the successful firm of Rosenstengel & Kleimeyer who manufactured a range of Victorian furniture from their Toowoomba base. Ed, one of 12 children, was apprenticed to his father at the age of 15, the first step in a training program steeped in the European tradition that required an apprenticeship to be followed by masterwork and journeyman years.

Dating back to the dark ages, this proven tradition enabled the apprentice to travel and learn from as many masters of the craft as possible. At the age of 18, on completion of his apprenticeship, Ed Rosenstengel left Toowoomba to travel as a journeyman cabinetmaker for a period of eight years. He worked in Sydney, then New Zealand and Canada before spending several significant years in what was then considered to be the ‘furniture city’ of the world, Grand Rapids, Michigan, USA. 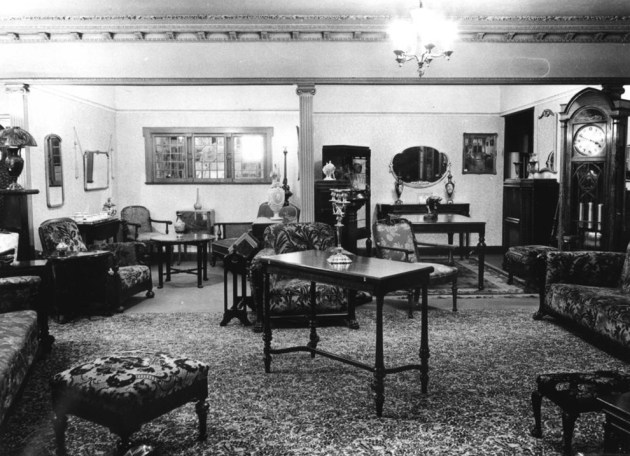 Returning to Australia in 1911, Rosenstengel remained working for his father’s business until 1922 when he moved to Brisbane to establish Ed Rosenstengel Furniture in Brunswick St, Fortitude Valley. Over the 36 years that followed, Ed Rosenstengel and his talented craftsmen built a reputation for unique style, fine quality and enduring customer commitment that was unrivalled by their competitors.

Rosenstengel was a committed student of the decorative arts and through his studies developed a belief that timeless fashion could result from the skilful revival of historical styles. In support of his theory, he noted how great 18th century designers such as Chippendale, Sheraton and Hepplewhite, all came about their designs through modern interpretations of earlier period designs. Although the fusion of period styles so evident in Rosenstengel’s work make his pieces very difficult to characterise stylistically, it can be said that two main styles of work developed. 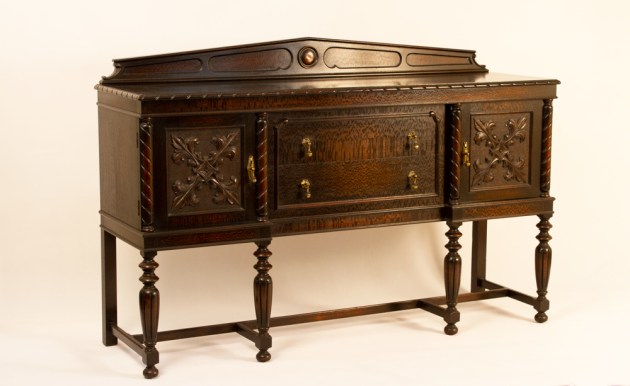 The first was heavily grounded in the Renaissance period of the 15th and 16th centuries. Ideally suited to the Spanish Mission homes of the 1920s and 30s, these works were typically executed in ebonised silky oak, with boldly carved scrolling or foliage and turned legs of Tudor or Jacobean design. 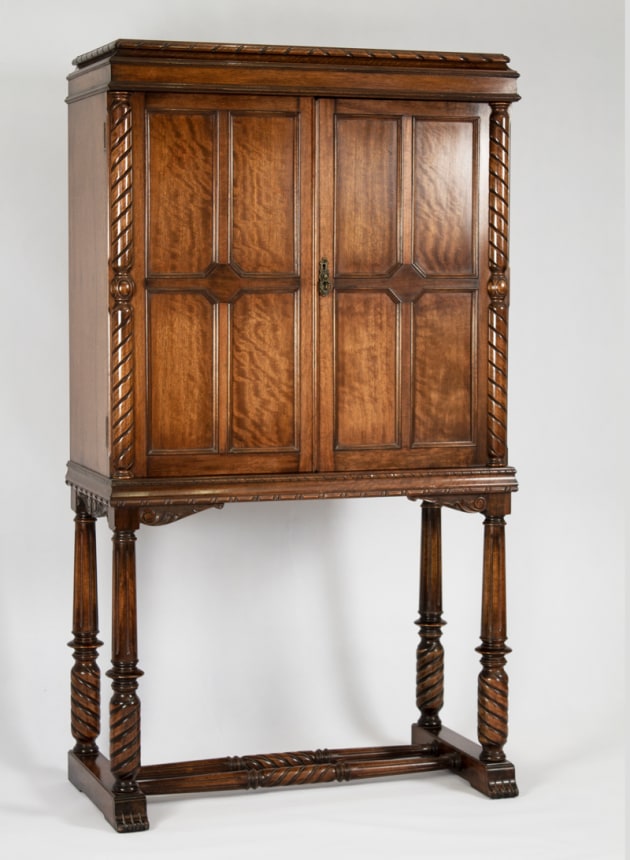 Notwithstanding the quality of these ‘Renaissance’ works, it is arguably Rosenstengel’s more refined pieces in the Neo Classical style that stand as his greatest achievement. These works were typically executed in figured Qld silkwood, with delicately carved swags or garlands of flowers and turned legs or supports further decorated with fine reeding or fluting. On both types of furniture, carving of the highest quality was considered a feature of much of his work.

Rosenstengel was by all accounts a meticulous man who demanded the finest quality from his workers. His writings demonstrate an ongoing belief that the crafts were in continual decline due to the increase in mass produced items of inferior quality and tasteless style. In an age when modern materials and techniques of mass production were infiltrating every aspect of furniture design and manufacture, it is significant to note Rosenstengel’s refusal to capitulate to commercialism by lowering his standards. 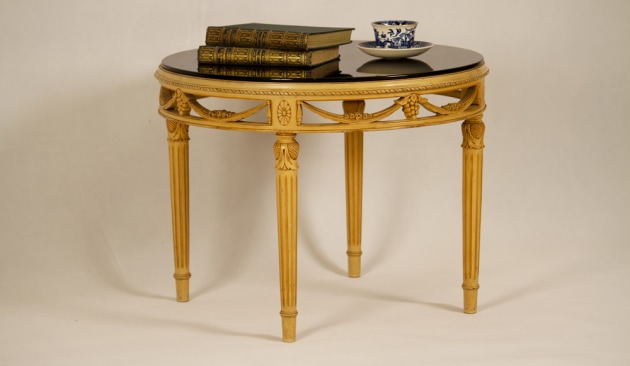 Commissioned circular side table in the Neo Classical style with carved rosettes and vitrolite top finished in ivory lacquer, c.1935.

Although his workshop included modern machinery of the day, he used highly figured solid timber that required significant preparation by hand. Perhaps most notably, he always demanded his pieces be hand polished at a time when most manufacturers had switched to sprayed cellulose lacquer. In the 1950s he employed the same number of qualified French polishers as cabinetmakers which demonstrates his commitment to finish quality.

Timber selection was also critical, with Rosenstengel refusing to use anything but select Queensland timbers. Magnificent cuts of fiddleback Queensland silkwood and quartersawn silky oak were staple choices but he also selectively used white beech, silver ash, turpentine, rose maple and Queensland walnut. Perhaps the best affirmation of the quality of Rosenstengel’s work were the prized public commissions he was able to secure during his career, including a magnificent jewellery casket for the Queen Mother in 1934.

Commitment to the customer

Being far more than a furniture manufacturer and retailer, Rosenstengel was a qualified interior designer who specifically designed pieces of furniture to suit a customer, their home and décor. He worked with customers to understand their temperament, using the pieces on display within his vast showroom as a living catalogue of his work. Rosenstengel avoided offering suites of furniture and was infamous for mixing complementary styles to create a harmonious whole. Much like Chippendale, Rosenstengel saw the ability to draw in perspective as a crucial skill of the cabinetmaker, and spent many hours at the drafting table producing sketches for a client’s consideration. 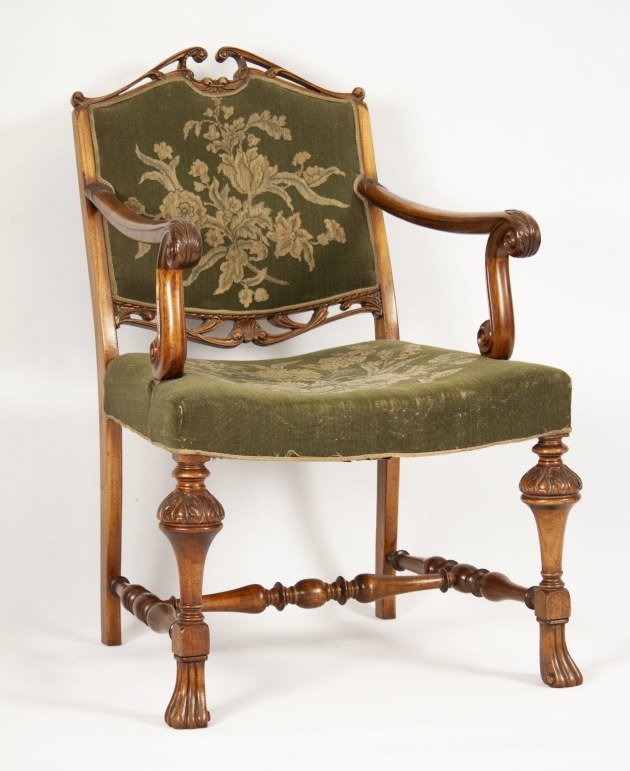 On the account of many that knew him, Rosenstengel was considered as much an astute businessman as a talented furniture designer/maker. Although his designs drew heavily on traditional period styles, through skilful reinterpretation he developed his own unique style and loyal customer base. The mutual loyalty between Rosenstengel and his clientele is perhaps best evidenced by what followed the announcement of his retirement and closure of the business via an advertisement in The Courier Mail in 1956. So flooded was Rosenstengel for final requests, that despite failing health he agreed to keep the doors open until 1958 so that final orders could be met. It is interesting to note the tenets on which he built such a successful business are perhaps just as relevant today as they were in the 1920s.

Unacknowledged photos are by Troy McDonald.

Troy McDonald is a Brisbane-based engineer whose research of Ed Rosenstengel has resulted in creation of rosenstengelfurniture.com in celebration of the Queensland artist.