Above: Alison Crowther in her ancient barn workshop. The spherical small, black, circular ring and hole on the side of the sphere helped centre the pattern which was similar to the one shown hanging above. Photo: Beth Evans

Not many woodworkers, when asked what tool they would like to be able to buy, would answer ‘a better forklift’. But a forklift is indeed an indispensable tool for English sculptor, Alison Crowther. Perhaps the most breathtaking aspect of her work, when you first see it, is its physical size. One striking example, now a fixture in the main lobby of Tower 7, One Shenzhen Bay, China, is carved from a 5m x 1.3m log of English oak weighing around 13 tons, and whilst most other works are considerably smaller, anything less than a forklift would not suffice for moving many of them.

However, producing sculptures this size was not initially her ambition. Born on the north-west edge of West Yorkshire in 1965, she studied furniture design (but not furniture making) at the Royal College of Art, graduating in 1989. Her interest in working with wood, in particular woodcarving, was fanned by a limited exposure to using it in some projects during the final year of her course, and her discovery that the tactile pleasure of carving was so much more appealing than the high-tech cerebral activity of the design world. The savage storms that swept across the UK in 1987, whilst a disaster for the forests and woodlands, did have the unexpected benefit of creating an abundant supply of high quality wood, perfectly timed for Alison’s growing passion for carving.

After an initial foray into furniture making (mostly benches and seating) failed in the recession of the early 90s, she returned home to endure a variety of menial jobs, but always managed to continue her carving explorations in her spare time. She finally secured a teaching position in West Sussex, and from this base began to plan how she might build a career as a woodcarver/ sculptor. She researched all the local galleries and art spaces, and continued carving pieces in her own time for them to sell.

As the new century began, her success and established reputation gave her the confidence to give up teaching, and to strike out on her own as an independent sculptor.

Early on Alison focussed on using English oak as her wood of choice. She loved the way it was woven into the history of everyday life in the UK, in particular for its renown strength and durability. This last attribute was particularly important as much of her early work was destined to sit outdoors, exposed to the elements. A final blessing was that it was readily available locally. But it also ties in perfectly with her aesthetic vision.

Alison says that she wants the wood to ‘speak’, and for her this is not an empty art-speak cliche. What I think she means is this. The history of a tree is contained in its form, and every piece of wood from a tree carries part of that history. Some of it is visible to sensitive eyes. In particular, the shape of the trunk and the way the grain flows are affected by the natural forces that bear on the tree as it ages, and the climatic cycles it endures. 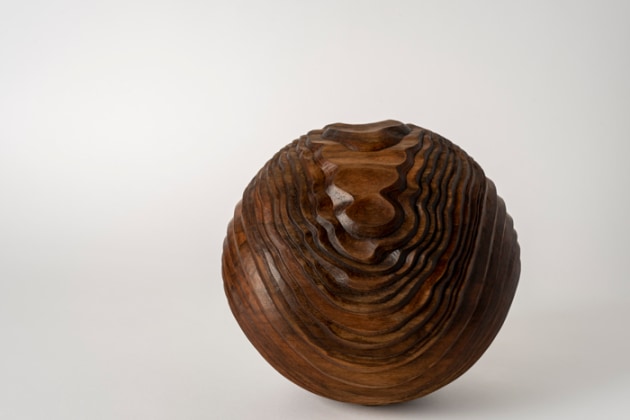 Her design language, the forms and the carved details she uses as the tree’s ‘voice’, have evolved over time. I imagine the process has had a chicken and egg quality to it, a backwards and forwards dance between what she sees in the wood, and her creative imagination, with each sculpture growing out of each one that came before it.

When you look at a typical Alison Crowther sculpture, what you see is a simple, underlying form – a sphere, an egg, a tapering cylinder – with a carved surface pattern, or what she refers to as a carved ‘texture’. The idea is for the form to carry, but not obscure, the texture. 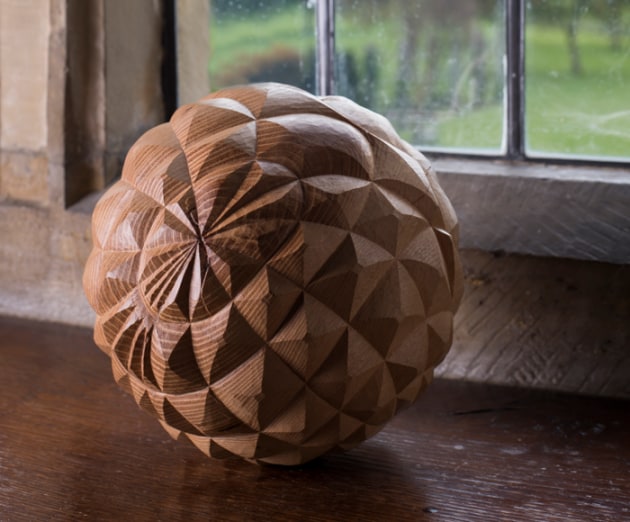 Old oaks can be famously twisted and gnarly, with numerous closely spaced growth rings, so that when such a tree is carved to a simple form such as a sphere, or an egg, the rings create an entire surface of wonderful, sinuous lines, all in the rich, warm colour of the parent tree. There is no need to edit the lines by disregarding messy bits, or chopping out ugly bits, as they all run in beautiful, undulating closed loops, just as the growing tree made them. By choosing the spacing she wants, and then carving along the spaced growth rings with either a V or curved gouge, Alison is able to use shadow, the carver’s friend, to highlight the wonderfully sinuous patterns the rings create on the wood surface.

A more complex surface design, or ‘texture,’ involves using the growth rings to create a network of horizontal lines, and the medullary rays to create a network of vertical lines. This works really well when the vertical lines gently twist, or spiral, up the length of the tree. Once an appropriate spacing for each set of lines has been decided, and drawn, the spaces between the lines are carved out, using a method worked out in the preliminary models (these small models are often developed into small works suitable for sale in small galleries). 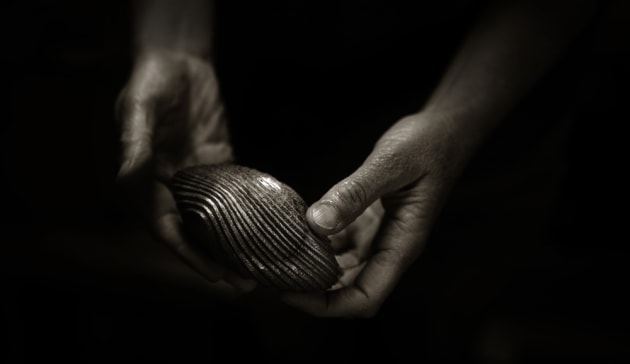 The downside of the large sculptures is that a lot of wood has to be removed. In quoting for any commission, Alison has to allow for the cost of any additional skilled labour she might have to hire, and carefully calculate how long she might need it for. Over time she has worked out a system that works for her. So that she does not need to spend all her time directing assistants, she plans the work very carefully, and makes up a variety of full size patterns. These effectively control the shaping of the wood by her team, and free her to do other work.

She has three skilled workers who are familiar with her work and way of working. Her senior helper has been with her for eight years and works two days a week. Another also works two days, and one only one day. When required she is able to hire additional people from the local workforce who have enough basic woodworking skills to be useful. As a way of giving back, or helping ensure the continuation of the woodcarving craft, Alison’s senior assistant, Phil Walker, secured a Queen Elizabeth Scholarship to enable Alison to spend one day a week passing on to him her knowledge and skills. 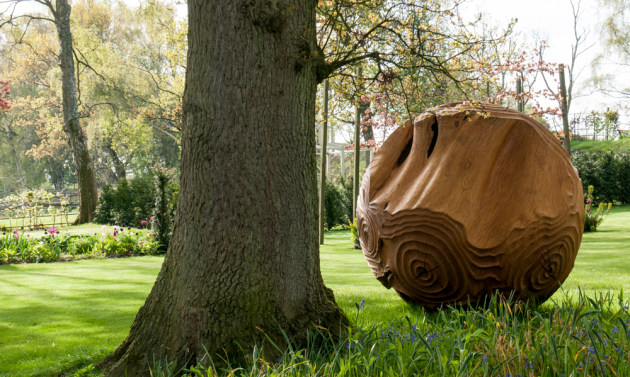 Outer Sphere, 2015. ‘It takes an experienced artist’s eye to see these possibilities for the wood to ‘speak’ in the raw form of the fallen tree.’ Photo: Jacqui Hurst

To maintain a constant workflow, and a consistent income, Alison usually has around five works under way at any time. One might be at the development stage of sketches and discussions with a prospective client. She might be carving models
of possible forms and/or texture for another, while the preliminary shaping of the underlying form of a fourth work is happening in the yard outside her barn workshop. Finally, another couple will be inside as Alison and her assistants do the final, detailed carving of their texture.

As the photos show, the total work required for any one of these sculptures is enormous, so quoting an accurate price is critical. She cannot afford the luxury of working ‘on spec’, but has finally reached a point where she is comfortable with the price she gets for most of her work, and is able to be more indulgent with the occasional commission that has, for whatever reason, something that is of extra-special interest to her. The Covid pandemic has caused all the corporate and hotel commissions to dry up, but these have been adequately replaced by private commissions.

Scale Tree II and III in situ at One Shenzhen Bay, China, 2018. The ‘scale tree’ is known from fossilised remains dating back between 360 and 300 million years ago, with the bark covered in diamond shaped impressions in rows spiralling up the trunk.

You might be envious of Alison’s enormous old barn workshop, with its massive timbers and cavernous space, until you contemplate working there through an English winter with no central heating. Alison is currently having another workshop built, using the traditional, heavy timber framing, but while it will be better insulated and partially heated, any heating has to be limited by consideration of its effect on the green wood she is carving.

I think sculptors grow into their work, with each piece building on what has come before it. Where it ends is unpredictable, more a product of chance than planning. But if the work is guided by a consistent aesthetic vision and love of the work process itself, the result will be a body of work that is a clear signature of the artist who made them. The forms on these few pages do not need Alison Crowther’s signature to tell you who made them.

Robert Howard is a woodworker who also teaches woodcarving classes from his Brisbane studio. Learn more at www.roberthoward.com.au