A tribute to Bryan Poynton

I have a strong suspicion not many of you would have heard of Bryan Poynton. However, within the relatively small community of Victorian woodworkers, there would be no soul commanding a higher degree of respect than Bryan. For all of you, and particularly those that are not so familiar with Bryan and his work, I would like to take this opportunity to pay tribute to this national treasure – Bryan Poynton.

For me, my initial introduction to Bryan was through his extraordinary work at the Wood Design Exhibition in Colac, Victoria in 2011, where we were both exhibiting. I remember it as if it were yesterday. Standing in front of a glass display case, staring at a spoon he had carved thinking, ‘WOW! This work is sublime! Who is this guy?’

I was not able to meet him that weekend but I was able to hear some wonderful snippets of information about the man. He lived in the middle of the Otway Ranges surrounded by tall eucalypts in a wooden house he had hand built himself. He textured the entire structure inside and out with an adze, and he used to be a patternmaker by trade. Tantalising details!

It was a few years later that I finally got to meet Bryan. By very good fortune he attended the Melbourne Guild of Fine Woodworking’s Open Day Weekend in 2015, and soon after that we started to develop what would become a very close friendship.

So how do I begin to describe the most talented artisan I have ever met? Well…Bryan was many things to many people. He was a pioneering surfer, one of the principle people to develop Bells Beach as a popular surfing destination. He was a poet with his favourite form being that of the Japanese haiku. He was an artist, engineer, inventor, patternmaker by trade, artisanal woodworker and mentor to a countless number of people, including myself. Of course my main connection with Bryan was through his woodworking.

Two views of Brian Poynton’s Self Portrait with Pigeon Hole. Created for Box Forms, an exhibition curated by the Victorian Woodworkers Association in honour of Anthony Pryor.

If I was asked to think of a couple of furniture makers whose work is comparable to Bryan’s, then I would definitely put him in the same category as Wharton Esherick and James Krenov, two extremely famous and influential figures in the studio furniture movement in the USA.

Personally, each time I visited his house in the Otway Ranges, which was full of his artistic and creative works, there would be something different that would catch my eye and leave me standing there in complete and utter wonder. Honestly, I could go on and on and on about the countless examples of work that left me in awe. 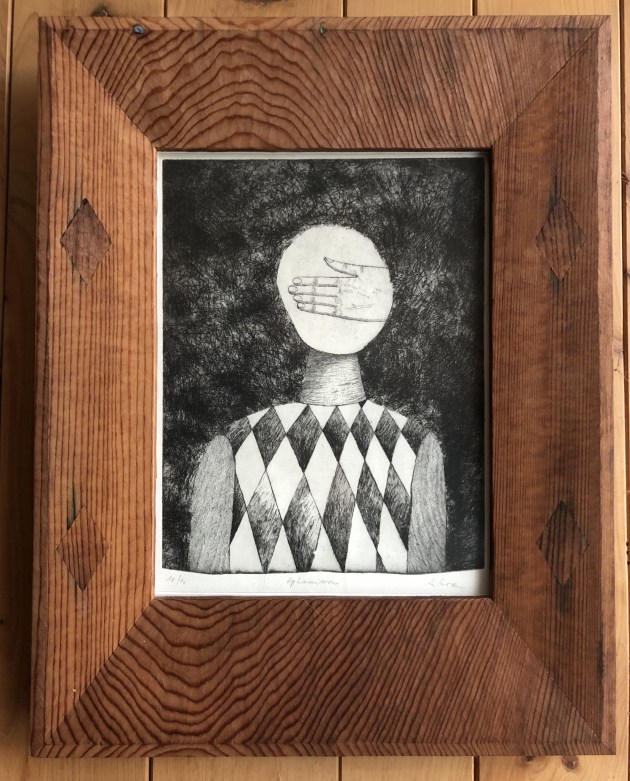 One of Bryan Poynton’s picture frames, carved from a single piece of oregon to mimic perfectly mitred joints.

One small example that is relatively easy to explain in this tribute was a beautifully framed picture that I just happened to notice on one visit. The heavily bevelled frame was made from old growth oregon. I suddenly noticed that at each mitre, the growth rings from both adjoining pieces were perfectly aligned or connected. This initially really confused me and made me question – what the hell is going on here? I stood there for several minutes until suddenly it dawned on me how he had managed to achieve this. The frame was not four pieces of oregon mitred together, but rather one solid piece of oregon carved to make it look like a picture frame made from four separate pieces. There are several picture frames like this dotted around the house.

Bryan never boasted about his own work. He never once personally highlighted any of the thousands of beautiful details that surrounded you.

On one particular visit, he pulled out his portfolio and to my surprise, it was a very simple 1970s photo album full of polaroid shots that he’d taken himself. Of course when turning the pages, photos would often pop out of their sleeves and fall onto your lap! Astonishingly, it was from looking through this photo album that I discovered that Bryan had been commissioned by the Australian Government to make a wedding gift for Prince Charles and Lady Diana. A beautiful and elegantly simple box made from blackwood.

Bryan had an intimate relationship with his surrounds. Local species such as cherry ballart, satin wood and blackwood were amongst his favourites. He was a highly gifted and creative lateral thinker who came up with innovative ways to solve what ‘to the rest of us’ seemed impossible.

Bryan has had a profound effect on me over the last several years, both personally and professionally. Most of my treasured memories and experiences over this time revolve around visits to him and his partner, Edie. I feel blessed to have been his friend, to have shared ideas and beliefs and received his guidance and heart felt opinions on all things relating to our shared passion for woodworking. He has truly inspired me to continue to inspire others and to mentor as he has mentored me.

Rest in peace Bryan. You will always be in my thoughts.

For those interested in learning more about Bryan Poynton, in February 2018 there was a four hour interview conducted by Jesse Adams Stein. It is available through the National Library of Australia and is part of the ‘Re-shaping Australian Manufacturing Aural History Project’ at this link.
Bryan’s pattern making toolbox and iconic workbench have been donated and gratefully accepted by Museums Victoria.

Alastair Boell is director of the Melbourne Guild of Fine Woodworking.