Carved pair of bowls in redgum. The edges and outer surfaces were wire brushed and scorched.

While planning a series inspired by Melbourne’s Yarra River, it became clear that a design I’d envisaged as a pair of carved forms could be converted into turnings, albeit with a fair amount of hand work. The turned pair would just take a bit more planning, but the challenge whet my appetite. The results would probably be quite different, but why not explore two ways of solving my own design brief?

The carved pair was easier to start on. The design was inspired by the flow of water and the smooth curves of surrounding river red gum leaves, so I would need to constantly evaluate how the two halves would compliment each other. 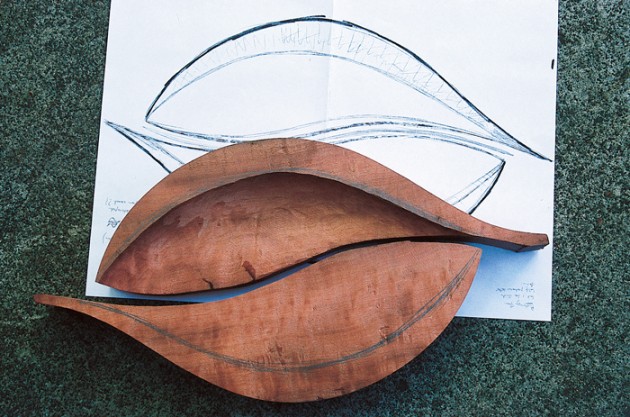 I bandsawed the timber to the required size, then transferred carefully prepared drawings onto it. Next, I carved the interior of the bowl. This way it was easy to clamp the wood for the initial roughing to be done with a power carver fitted to an angle grinder. 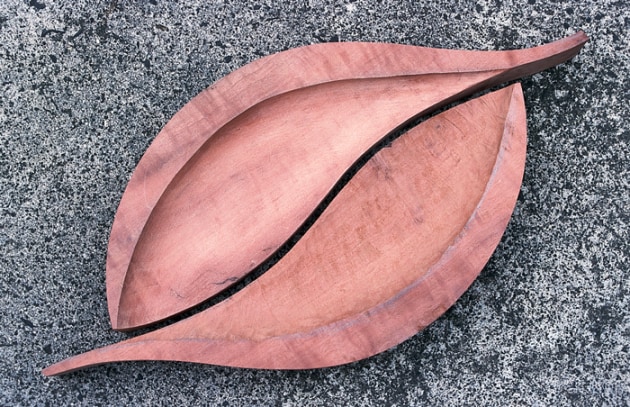 The forms were refined with traditional hand carving tools, followed by homemade scrapers. I make these from discarded circular sawblades cut into segments and shaped to suitable curves on a bench grinder. The hardened steel holds a fine edge well and not only removes carved high spots, but is also good for rapid shaping. The photo above shows the two halves in their intended position.

Once I had developed and rough-sanded the inside shape of each half, I removed the exterior waste stock, again sped up mechanically with the angle grinder. I refined the shape with rasps and files, then finished with scrapers, needing minimal sanding to finish. It is important to feel the surfaces regularly to judge if the shape flows smoothly, and if inside and outside forms compliment each other. The good old ‘finger gauge’ is best for this, but if you are in doubt don’t hesitate to use figure-eight calipers to compare ‘felt’ thickness with true thickness. 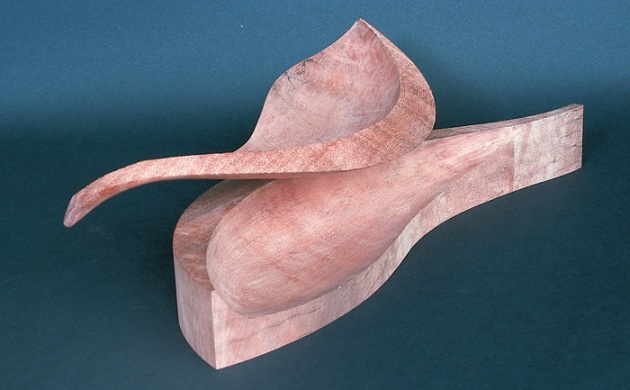 The photo above shows the two halves: one with its exterior carved, the other still to be shaped. With many hours spent refining the two forms – checking thickness, flow of form and balance – it’s important not to lose track of the major design concern: how the piece looks once the halves are together. Good execution is wasted if the finished product appears unbalanced or out of proportion. Equally, a good design is wasted if the piece produced feels thick, heavy or rough to the touch.

At this point I struggled with the problem of combining the two parts. There just didn’t seem to be any way of joining them to create a completed bowl. Finally, I decided to rest the two halves on pebbles scattered on a display surface, setting them independently into small craters. 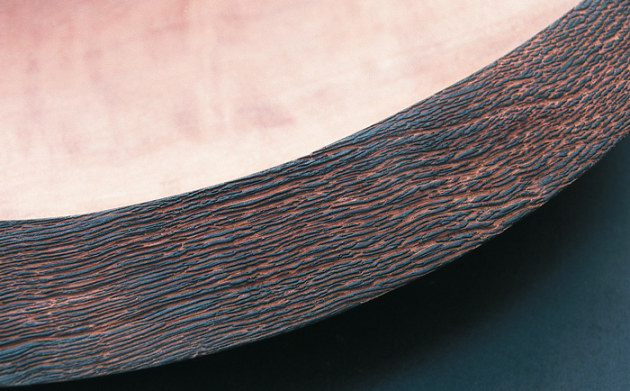 A major detail of this pair of bowls is the edges which were wire brushed and torched to create a contrasting texture.

The second Yarra bowl pair was far more difficult to develop. It takes plenty of careful planning, drawing and creative problem solving to convert a line drawing into a form that can be turned and then segmented. Turning generally allows quick creation of symmetrical forms. Cutting, reshaping and reassembling slows the process and, in this case, makes it more of a mental exercise. 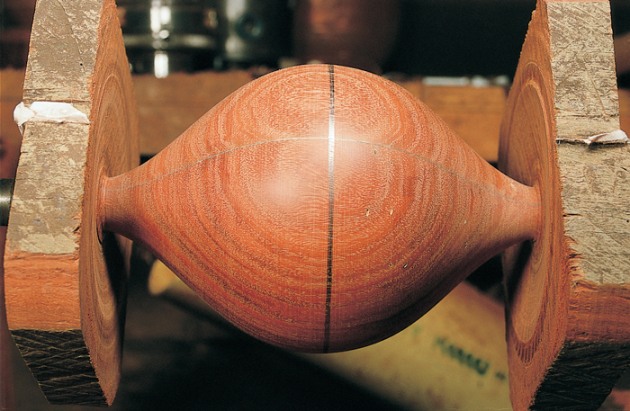 First, I had to develop a turned profile that would enable the required forms to be cut from its solid bulk. These would later be worked in isolation and eventually combined to create the finished bowl. It took some time to sketch the profiles, then photocopy, cut and rearrange the paper templates. I had to stop regularly to reassess how things would proceed once the wood was placed on the lathe.

To begin, I glued together two blocks of wood, sandwiching a layer of paper between them. Once turned, this paper would allow the block to be split in half. After the glue dried, I fitted the block to the lathe, making sure the glue line was aligned with the lathe’s centres.

The photo above shows the piece still on the lathe, turned and sanded with ends left square for stability when I cut it on the bandsaw. Note the glue line and exposed paper. 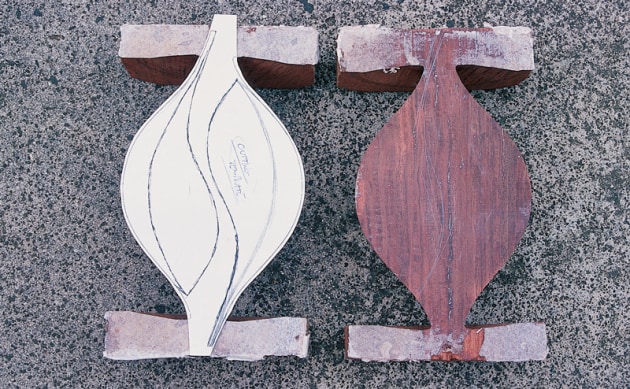 After the form was turned and sanded, I removed it from the lathe and split it in half with a chisel carefully positioned on the glue line. Above you can see the template I created to show where the halves were to be cut and then carved to the required shapes. 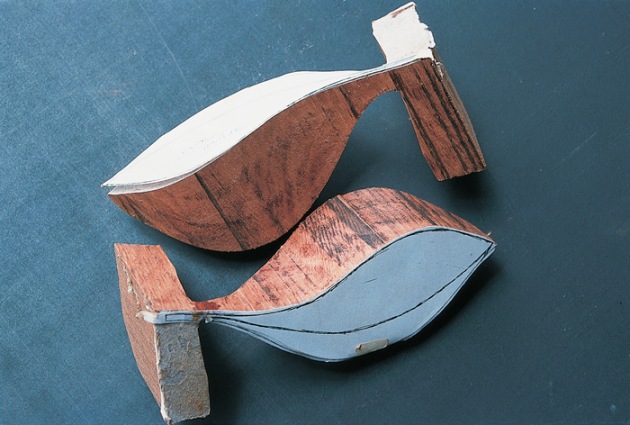 The forms have now been cut to the shapes outlined on template. 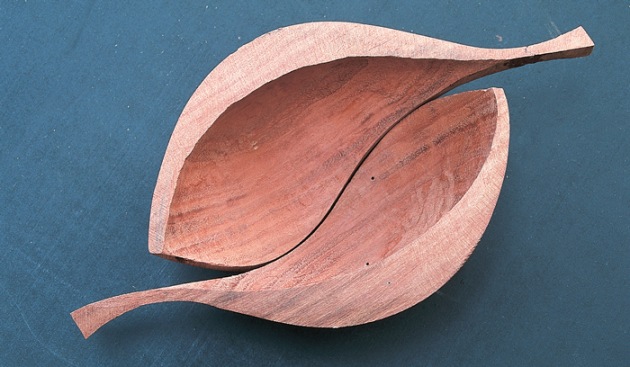 Each piece was then held in a vice and hollowed with a mini power carver. My intention was to create quite a thin piece with a continuous flow that invites exploration through touch, but it’s equally important to ensure visual flow. 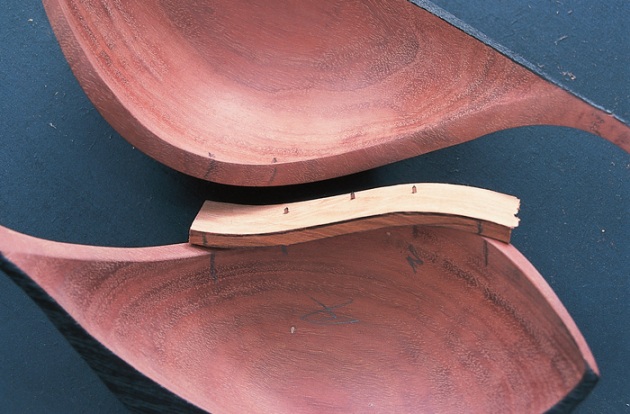 I wire-brushed the top area of the bowl to create texture and then highlighted it with a quick application of liquid shoe polish, which is nothing new. So many African ebony souvenir carvings are finished the same way, creating that sensuous black associated with prized ebony.

A final problem was how to join the halves, a totally different problem to the first pair of bowls. This time I made a small insert to echo the space left between the halves. I used an offcut of sheoak, bandsawn and sanded to shape. It was fixed with a couple of fine nails, which also acted as locating pins during the shaping process (see above). 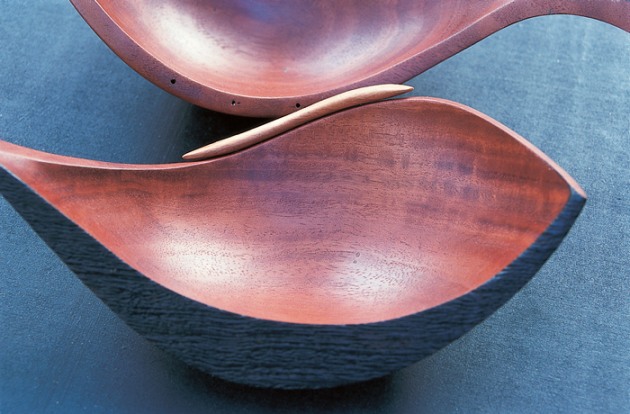 After several attempts at refining this small but very important component, I ended up with the snake-like insert shown above that ties the two forms together into one unit. Before assembling, each component was finished with a polyurethane finish, wiped off soon after application so both grain and texture are accessible.

Which pair of bowls do I prefer? I’m not sure. Each has its own qualities, and each presented different problems. Overall, I think both were successes.

Andrew Potocnik is a wood artist and teacher who has written many stories for Australian Wood Review. This article was first published in issue 40, Septebmer 2003.