Some years ago I was commissioned by an English garden designer to build a five metre diameter park-bench that faced inwards to encircle a large tree. It had to be made from sustainable, untreated and locally grown wood, and be durable, beautiful and comfortable. It also had to be transportable because it was initially to be part of a feature garden at the Ellerslie International Garden Show in Christchurch, and I work in Nelson. Also it was afterwards to be gifted to the City of Christchurch as a permanent feature, so would need to be moved yet again.

With not much more than a concept sketch to go on, sorting out this range of challenges was very much left up to me. I was very lucky in the later stages to have had the help of a young volunteer assistant – Arnd Seibert, who had completed the nine month programme at the Center for Furniture Craftsmanship in Maine in 2011.

Above: Arnd Seibert assisted David Haig with the circular bench project. Here he is in the process of drilling holes for the 256 slats used on the bench.

Aesthetically, rather than going for the more conventional park-bench look of slats captured in rails interrupted by upright frames, I thought it would look more welcoming and dramatic if there was an unbroken ring of radially aligned seat and back-slats, with just one opening for access.

Moving this beast in even two parts was going to put huge stresses on the connecting joinery so building it in four detachable quarters seemed the best approach. Each quarter had four segments making sixteen in all. The frames have half thickness frames where they join, so when bolted together there is no obvious break in the rhythm. I used twin mortise and tenons on the full frames and single on the half-thickness frames. Frames were of Californian redwood, (Sequoia sempervirens) locally grown.

A circle divided by 16 thus provided the basic geometry for the layout (complicated somewhat by the seat being tilted back 2° from horizontal and the back 12° from vertical, both essential for comfort). So, the critical angle was 22.5° and with a maximum outer diameter of five metres, the circumference could be calculated (15.7 metres) which when divided by 16 gave me the true outer length of one segment, that is from centre to centre of two adjacent frames.

Working from the side elevation of a frame, with seating and back angles angles drawn and the placement of the connecting rails decided, I could then project the critical points onto the radial top elevation and find the true lengths of all connecting rails (two for the backs and two for the seats) which of course shortened as you moved inwards.

I verified my full-scale drawing using old-fashioned trigonometry to be sure the angle drawn was indeed 22.5°. I went over this several times as I knew any discrepancy could result in a spiral rather than a circle being formed, and there was neither time nor space for a full-scale mock-up to verify my measurements.

With the fairly small cross-sectional size of the top connecting rails, and the gentle curvature involved at those points, I was able to machine the top rails from solid, and have only slight short-grain run-out each end. Dowels were drilled in a full 50mm to ensure strength (accurate deep endgrain drilling into hard oak rails provided another challenge).

I couldn’t get oak in dimensions that could be machined to size for the lower rails, so I went for steam-bending instead, accepting there would be some discrepancy in the curvature. As long as true lengths could still be cut from the steam-bent rails I could accept some curvature variation, as the lower rails were simply providing a horizontal fixing platform for the seat slats so the exact curvature was not critical.

I ended up making the bending and drying forms around 5mm over-curved at each end to allow for springback, and this proved about right. I pre-soaked the oak blanks for a couple of days as the lower rails were American white oak, a brilliant bending wood, but it had been kiln-dried. The upper rails were locally sourced English oak (Quercus robur). 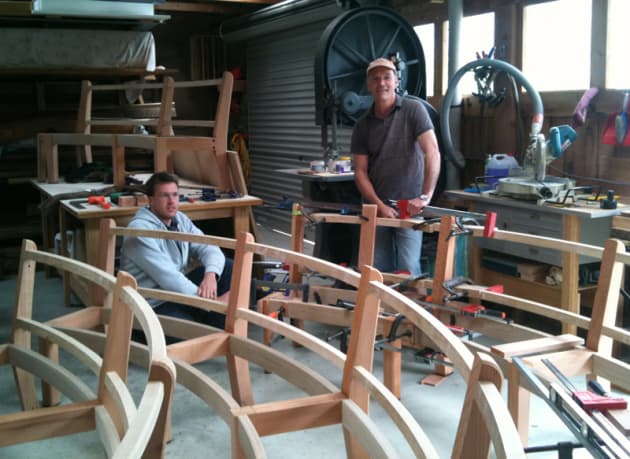 Assembly of the frames was a very painstaking procedure, with a pair of shaped clamping blocks applied across every single joint, so just putting all the clamps in place was a long job, and we could only glue up two segments (16 joints) at a time. We pre-glued the round tenons into all the rails though, so there was less gluing to do during the assembly. Using Epiglue Epoxy proved a good choice being waterproof, and giving lots of open time.

The slats could then be screwed onto the prepared frames and rails, using stainless steel countersunk square head screws (all aligned!). Being 10mm wider than the frames they were able to fully cover them as well so the whole effect was of an unbroken ring of wood. They were made of New Zealand native red beech (Nothofagus fusca), which once seasoned is incredibly stable, very durable, and, applied with an eco-friendly outdoor oil, went to beautiful warm orange-pink tones.

I added side-grain feet of oil-soaked durable native totara (Podocarpus totara) to the endgrain at the bottom of each frame. I reckoned this would probably add 20 years to the life of the bench, as the feet would be the most vulnerable area sited in a park.

A huge amount of time went into this project, I was working on it full time for about ten weeks, with my assistant full time for the last four. Despite the element of repetition, it was both challenging and satisfying, unfolding bit by bit, and not knowing if it would actually become a circle gave added frisson. It did though, and thousands of people got to sit in it during the Flower Show, chatting happily or looking up at the gnarly trunk and into the huge spreading branches of the ancient plane tree it surrounded, so as a social space it worked incredibly well. But only time will tell if it’s as durable as I hope.

Above: The bench assembled in Nelson, prior to delivery to Christchurch, New Zealand.