The material properties of wood have a profound impact on the acoustic response, mechanical resistance, physical stability, visual appearance, and tactile properties of the musical instruments that can be created from it.

The influence of wood’s vibrational properties tends to go hand in hand with the family the instrument belongs to. With idiophones, such as xylophones, wood constitutes the primary vibrating body. In string instruments, the importance of wood is for soundboards, which serve to transmit and radiate the vibration of a string, and act as a moderator that provides colour to the tone. In wind instruments, dimensional or moisture stability plays an important role.

Species of maple with softer wood are prized for their ability to bend, making curved surfaces easier to form for the bodies of guitars, dulcimers and violins. Other denser species of maple are frequently used as necks where rigidity is important. Spruce
is used in guitar tops (soundboards) and in orchestral stringed instruments because of its unique tonal characteristics.

Spruce is a low density (soft) conifer- softwood with high stiffness. When used for musical instruments spruce is usually derived from centuries old trees in which the growth rings are narrow with uniform distribution. This duality makes it traditionally the most desirable for use in soundboards. However, there is also a need for a protective finish on surfaces which in itself adds a profound effect to tonal quality.

On the other hand electric guitar makers tend to prefer denser harder woods like mahogany and similar species for solid body guitars because the sound produced and its tonal character depends on the electronic response of the amplifier and little
on the wood acoustics. Though beautiful in its own right, unpainted mahogany is seldom used in acoustic instruments, except maybe for fretboards where a denser, more durable (harder) wood is preferred.

Many species have potential here and range in colour and density; ebony (Diospyros) and blackbean (Castanospermum) are popular. Rosewoods are popular for use with fingerboards as well as backs and sides of guitars and allied string instruments. Like mahogany they have a different effect on the tone and tend to be used for the back and sides of acoustic instruments mainly for their strikingly beautiful visual appearance. 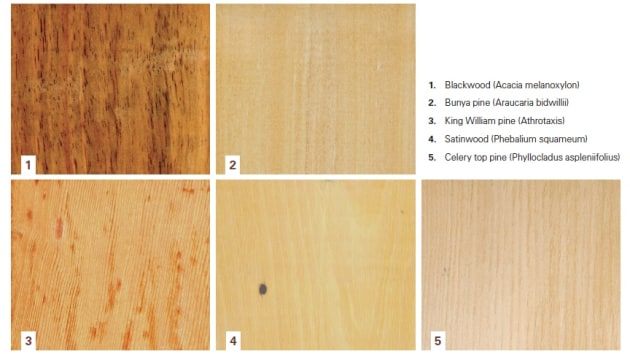 Over the years several Australian species have been trialled and found to be acceptable and in some cases preferred. These include blackwood (Acacia melanoxylon) for its beautiful figure, bunya pine (Araucaria bidwillii), King William pine (Athrotaxis) for soundboards, and other timbers including satinwood (Phebalium squameum) for their unique acoustical properties.

To this end, acceptance of alternative species has, in part, been affected by deficiencies in selection quality and as with timbers for striking tools, high selection quality is a characteristic which has entrenched the preferred species even though other alternatives are equally as good or better.

Interestingly, the similarity of bunya pine to spruce came about through unrelated research to enable the separation of hoop and bunya pine (Ilic 1995). It was found that the physical and mechanical characteristics of spruce and bunya pine were so similar that it was suggested that bunya pine would form a suitable replacement for spruce as it becomes more difficult to get good quality spruce. Interestingly, this substantiates what has been confirmed independently from empirical evidence and trialling by keen Australian luthiers.

Cells are at a very small scale the building blocks of wood and their arrangement in three dimensions is important for determining bulk physical and acoustic properties of woods used in musical instruments. Wood is a mix of differently oriented elongated and short cells – fibres are aligned approximately in the direction of the tree trunk axis. They are long slender cells. Fibres are hollow tubes which comprise the bulk of the wood and are bound together with lignin, a non-crystalline compound. The cell walls are composed primarily of cellulose with crystalline structure which acts as a reinforcing material in a matrix of non-oriented polymers made of different types of carbohydrates. It is the aligned nature of the reinforcing cellulose within the cells that facilitates the propagation sound energy (along the grain).

As a result of the cellular components being oriented in the different structural directions in the three planes of symmetry that wood exhibits, different properties along these directions make the material anisotropic. This is unlike some manmade materials (such as plastics), which are usually structurally homogenous in all directions. Consequently, the elastic properties which include the stiffness and other corresponding acoustic properties are also distinct along each plane of symmetry: axially – along the grain, and radially and tangentially across the grain. In addition to the above anisotropy, characteristic properties vary along the different directions which give rise to additional variability between different species.

The acoustic/elastic properties in these planes of symmetry can provide information about the suitability for use in musical instruments of different woods and their characteristics. Generally, amongst woods of equal density, woods with a higher acoustic wave velocity along the grain will also have a higher stiffness or modulus of elasticity (MOE). A similar argument can be advanced for the acoustic velocity across the grain in the two directions (radial and tangential).

Another important acoustic characteristic of wood is sound energy absorption which occurs in the course of vibration; this is often referred to as the damping capacity. Damping is the ability of a system to absorb energy from mechanical vibrations; this can be likened to a bell being struck, the duration of the ring-tone dying out can be long or short, clear or dull.

Measures of damping of mechanical/ sound vibrations are well known in engineering and have been given many different names. The simplest one is known as the ‘damping capacity’ and for low degrees of damping, ‘logarithmic decrement’ can be determined from sound/ vibration decay patterns; most simply it provides a measure of how quickly sound dies out. 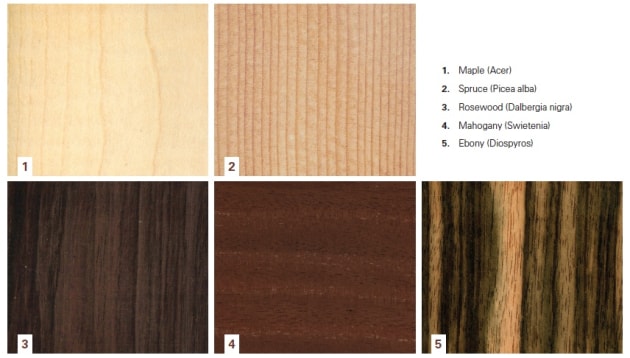 The determination of the speed of sound, and the corresponding damping, can be made most simply by using representative slender wood beams cut in each structural direction. The simplest way is to set the beams into vibration by suddenly releasing one end of a displaced of a beam with the other end fixed firmly. The rate at which the vibrations propagate provides a measure of the wood stiffness and the rate at which the vibrations die out provides a measure of the damping.

Thus the acoustic wave speed (speed of sound in the wood) can be determined from elastic theory of the resonant frequency of slender beams. Alternatively the wave velocity can be measured directly by timing the passage of a propagating disturbance. While the magnitudes of the numeric values obtained from the two different measurements approaches are not identical, they are always very closely related.

Measures of damping derived via the logarithmic decrement are often determined from the same experimental data obtained from resonance/vibration measurements. However, interpretation can be difficult as other losses not associated with the material properties can sneak in during testing, and some of these can lead to errors often arising from poor fixing of the test specimens and even air resistance to motion if the slender beams are very thin. Sometimes these factors can overwhelm the measurements and a lot of experience is required for correct interpretation. Important wood properties include density (D), dynamic Young’s modulus (E) and their ratio (E/D), known as the specific modulus, which is proportional to the square of sound propagation of a slender wood beam of given geometry.

Finally, while the basic tests described above from specimens cut from each structural direction are relatively straightforward they only constitute the first step in providing information to help with the selection of different species with desirable tonal characteristics.

There are more complex systems for the evaluation of acoustic characteristics of wood, some of them involve more detailed the assessment of the harmonics of the vibrations. More complex systems include vibration analysis of plates (two dimensional), these are thought to offer conditions nearer to the use of the material in the musical instrument, but they are more difficult to perform and interpret.

For woodwind instruments, flutes, bagpipes etc, stability to changing moisture conditions is important. In this case the instrument undergoes both temperature and humidity changes during its use and suitable woods are required with low movement and structural strength. Preferred species are ebony, but there are other species with low dimensional movement which can exhibit similar characteristics.

Dr Jugo Ilic worked as a wood scientist at CSIRO for 36 years. As part of his research activities he authored the CSIRO Atlas of Hardwoods and curated the Australian Wood Collection. He has written several articles for Australian Wood Review, some of which are shown above right. This article was first published in issue 86, 2015.