Curves and subtle tapers define the furniture that Tim Coleman designs and makes, but it’s often on its surfaces where stories are told. Patterns and motifs are stamped, inscribed, pierced and pieced together, often in layers. 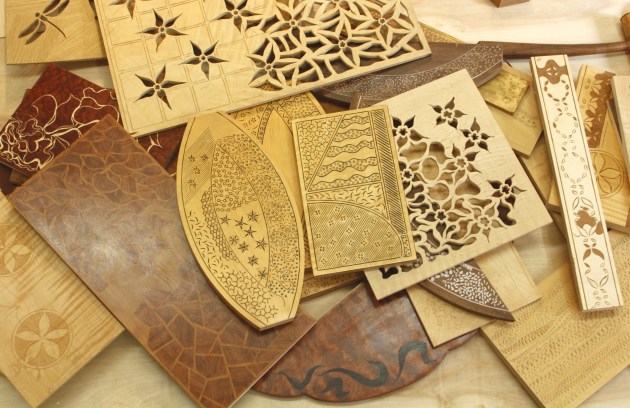 1. Just some of the sample boards created by Tim Coleman to test and develop his decorative techniques.

There are tales of techniques learnt and imagery discovered in a personal journey that moves both forwards and back in time. New techniques may be developed over a series of pieces, and also combined with others (photo 1).

‘I’ve always been drawn to patterns in nature and to different cultural design motifs’, Tim explains. ‘Early on I experimented with marquetry but not in a very traditional way, but instead using silhouettes and graphic elements. I love the way marquetry has been used in Art Deco and Art Nouveau furniture where stylised motifs are taken from nature.’ 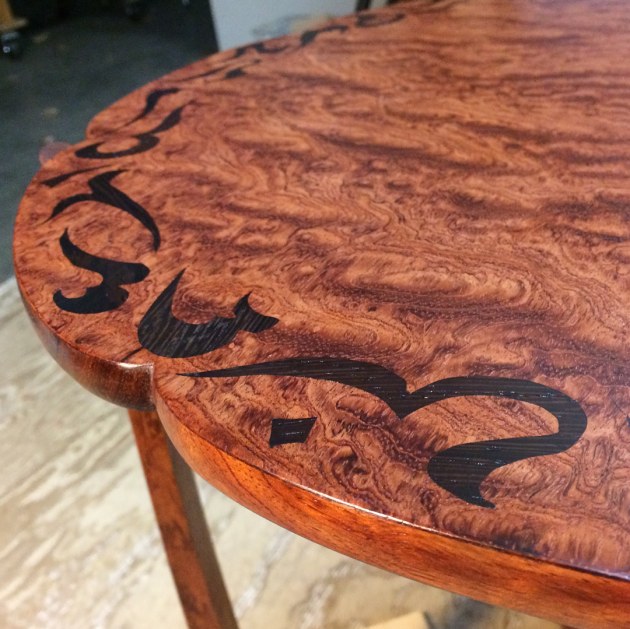 2. Tim Coleman’s side table with marquetry inspired by Arabic script is on fire with the wildest wood grain and flowing symbols. The veneer is rotary sawn bubinga.

‘And nature is often the underlying inspiration for many of the symbols, motifs and even scripts we see in various cultures’, says Tim. ‘Even the stylised lines of Arabic script are very fluid, leaf and blade like (photo 2). Once I had that as my basis of thinking
I realised that you can express the things that you see in nature either in a very loose and organic way, or in a little more ordered and in some cases highly mathematical (as in some Arabic cultures) way.’

The stamping technique that Tim is known for came about by happenstance. His early studio was located in an old 1700s manufacturing building: ‘When I moved in there were discarded stamps all over the place – you’d find them between the floorboards, on window sills and in little boxes and I just started collecting them. 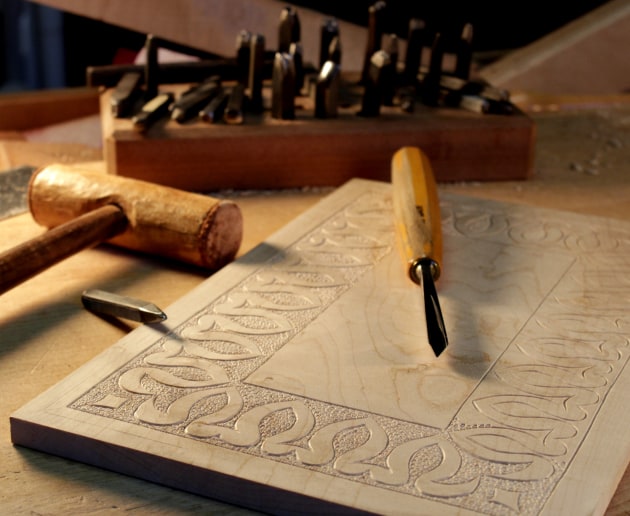 3. Some of the tools Tim uses for his surface embellishments.

My young daughter was with me every afternoon (my wife and I were trading childcare responsibilities) and we would play with the steel stamps, and it wasn’t long before we were hitting them into wood and making patterns just using the letters and numbers.’ Some of the tools Tim uses for his surface embellishments are shown in photo 3 while an early stamping experiment is shown in photo 4. 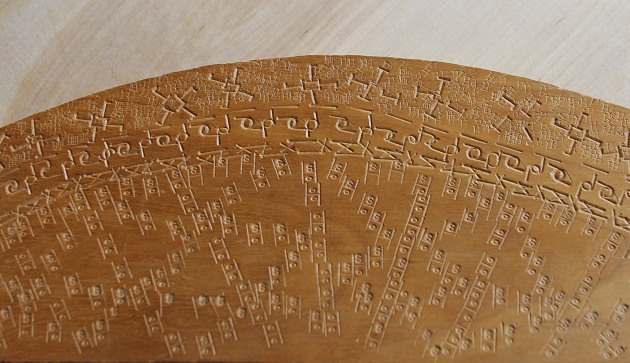 4. A close-up view of one of Tim Coleman’s first stamping experiments shows the rune-like effect achieved with various letter and numeral stamps.

The decorative possibilities were clear but the impressions weren’t deep enough so Tim experimented with heating the hardened steel with a torch and then reshaping the edges with files, sandpaper and grinding wheels. He now also makes his own shapes and combines these with V-tools and veining chisels to add lines and grooves.

‘Zeros and crescents are useful shapes to start with’, Tim says. ‘You can use a nail set to achieve a zero shape or buy a set of steel stamps and take the temper out of the steel (heat it till glowing) and then modify the shape and angle of cut for best effect.’ 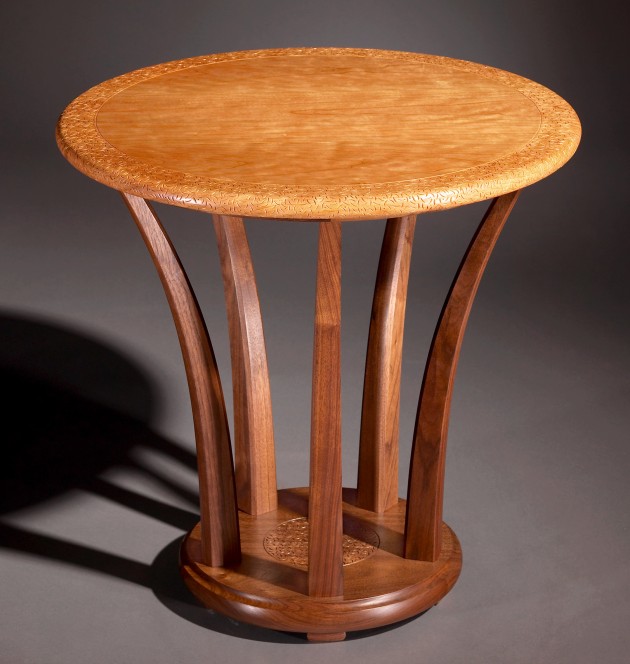 5. Stamps were used to create a decorative border on the tabletop shown. Make sure you stamp deep enough to retain clarity after sanding. Photo: Bill Truslow

An effective use of simple impressions ‘randomly’ stamped around the perimeter of a small table is shown in photo 5. The pattern is also echoed in the base (photo 6). 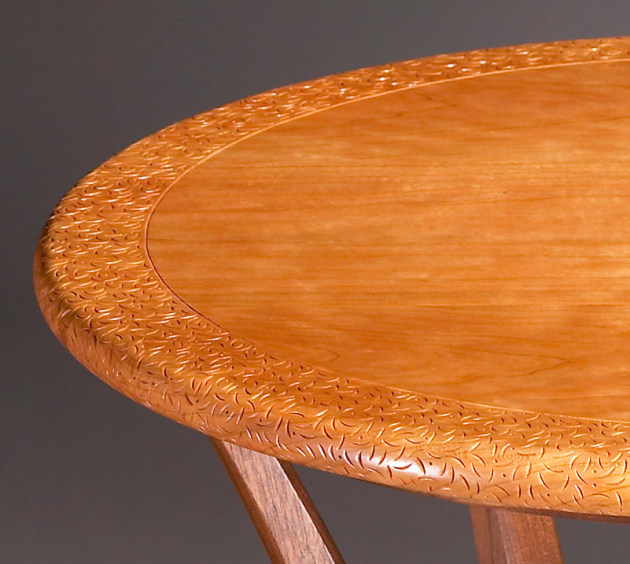 6. The motif on the base echoes the pattern on the top. Photo: Bill Truslow

For the pattern to stay defined you need to go a little deeper than you might think,
Tim says, to allow for subsequent sanding of surfaces before and in between finishing coats. On edges and endgrain, care must be taken to adjust the strength with which the stamps are struck to avoid splits. 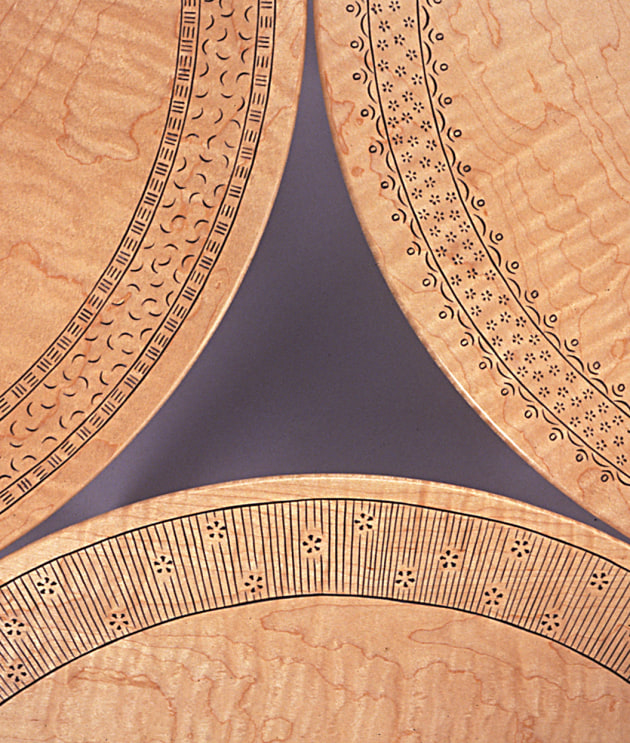 7. Stamped and carved patterns were outlined with contrasting lacquer that was sprayed on and then scraped off. Photo: Dean Powell

Marks from stamps and carving chisels can be combined to form various patterns. Adding black lacquer creates a striking contrast (photo 7), but it took a good deal of experimentation to make this technique work. There were early pieces that had to be scrapped because the black bled through. 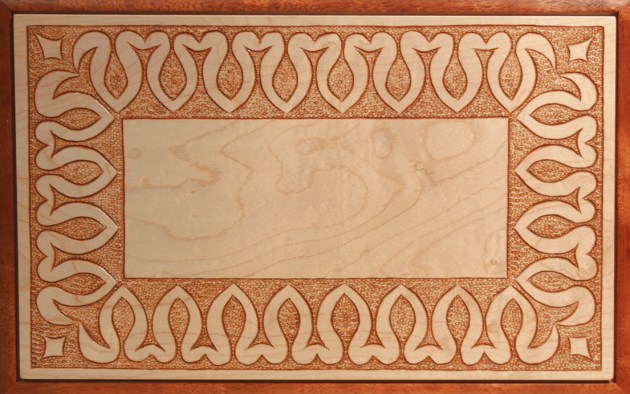 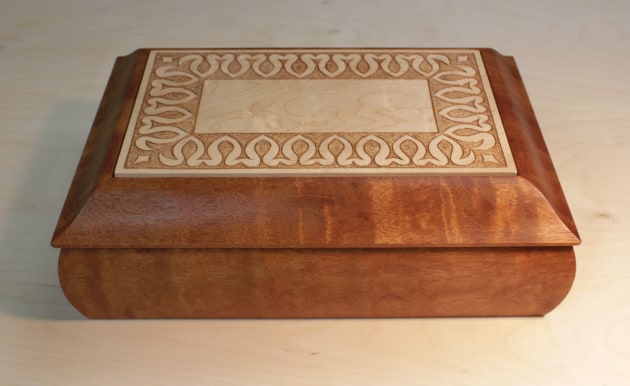 8, 9. Diluted acrylic paint was
brushed on and scraped back to highlight the pattern created on the lid of Tim Coleman’s Treasure Box.

Eventually Tim settled on using a vinyl lacquer sanding sealer to prevent any chance of the dark lacquer wicking into the wood surface. In the work shown, the black lacquer was sprayed on very lightly and left to dry for an hour before going over the surface with a very sharp card scraper. ‘It’s one of those really wonderful moments when you reveal the pattern 7 highlighted,’ says Tim.

The border pattern shown in photos 8and 9 was created with a V-tool and a zero stamp. The central field was masked off before diluted acrylic paint was brushed on and then scraped back, once again with a very sharp card scraper. Unlike lacquer, Tim says, acrylic has enough body to not bleed into wood pores. 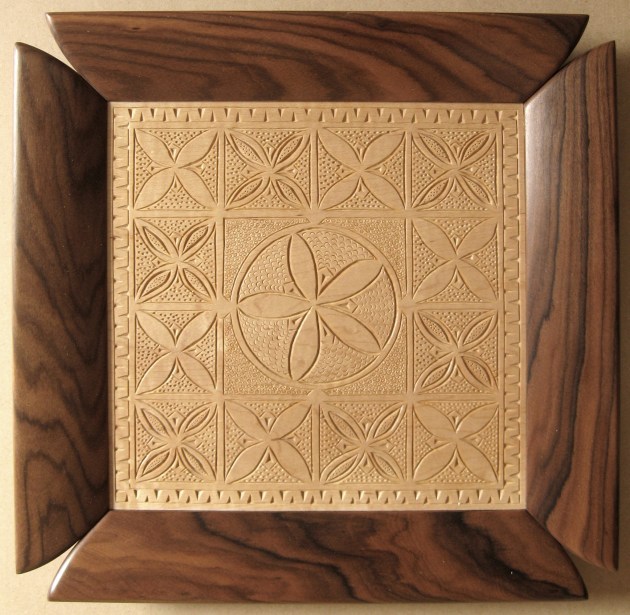 10. After establishing a basic grid patterns were freely chipcarved to achieve a softer flow on this 250mm square tray.

Just as Tim has adapted traditional marquetry to his own style he uses chipcarving technique in a more organic way. ‘To determine the layout I often start with a grid, then break it up and fill the spaces. I generally have a sample board with the grid mapped out to try out different carving strokes.’ The panel in photo 10 was initially a sample board that was later framed.
Apart from marking the centre of each square with a dot he steers away from laying patterns out, because he wants a flow that is
not too geometric. ‘You can use a compass and a pencil’, he says, ‘but I like the more spontaneous aspect. Even within a grid I try to leave as much room for spontaneity as I can.’ 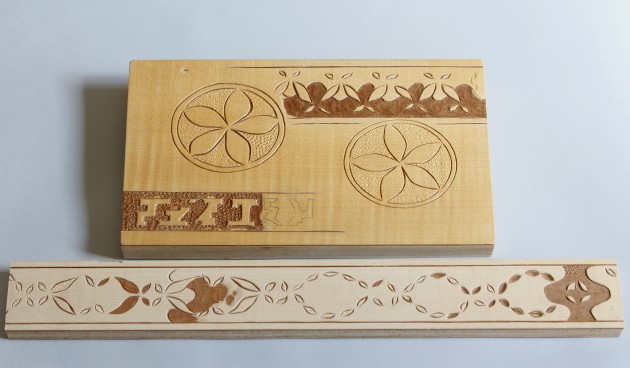 11. Carving through veneer into solid or plywood is another technique Tim Coleman exploits to create organic and original surface embellishments. 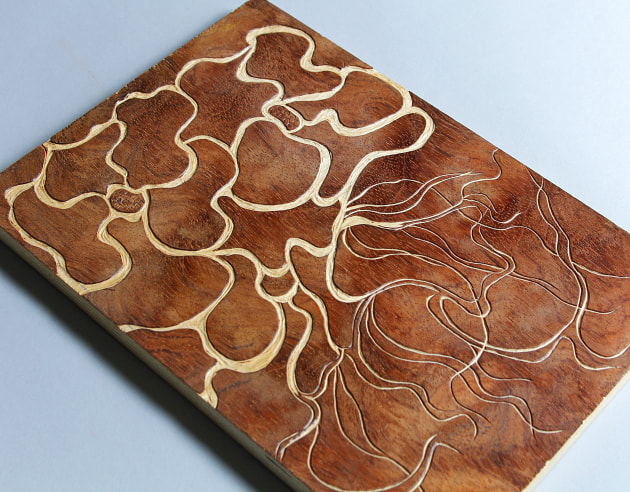 12. Texture left from gouges and V-tools can add another dimension when carving through veneer.

Shapes are outlined with a V-tool and then carved with gouges, leaving some of the carved texture in the undersurface. This is another labour intensive process and carving through a glue layer will also require tools to be sharpened more often. 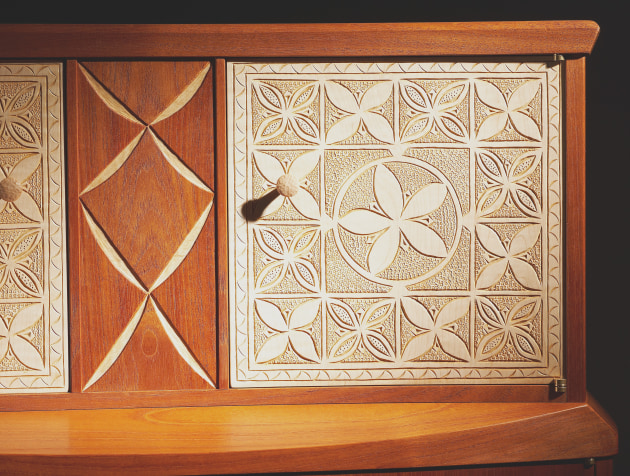 13. Patterns are stamped and carved onto door panels while a dividing panel has a scrollsawn overlay of veneer in a contrasting wood of this cabinet. Photo: Bill Truslow

Creating veneer overlays. In this technique patterns are scrollsawn into veneer panels which are overlaid onto cabinet surfaces, as shown in the central carcase panel in (photo 13) which has blade shapes cut out. 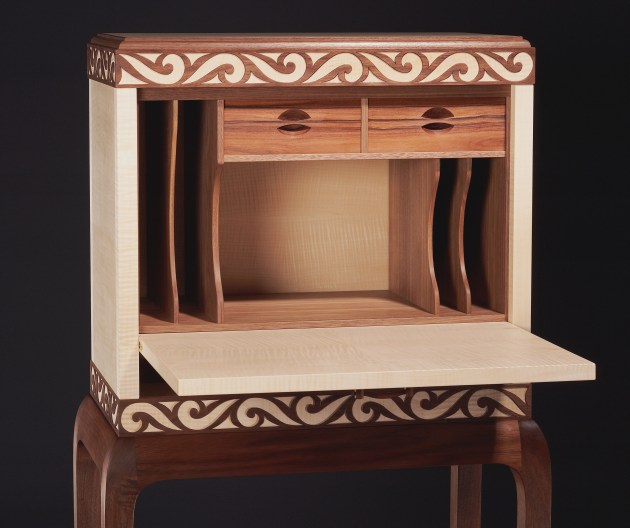 Photo 14 shows the same technique where fretwork is applied to a contrasting wood surface. The veneer is 2mm thick, yet surprisingly strong says Tim. 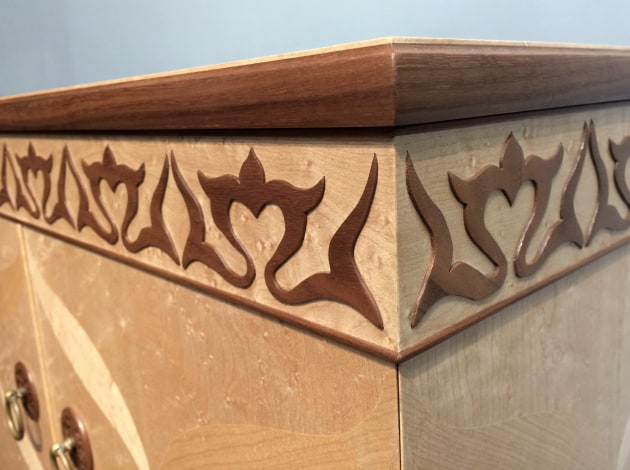 The cut edges are softened with files and sanding sticks. A variant with the cut-outs reversed is shown in photo 15. The same kind of overlay was applied to the lid of the box shown in photo 16. 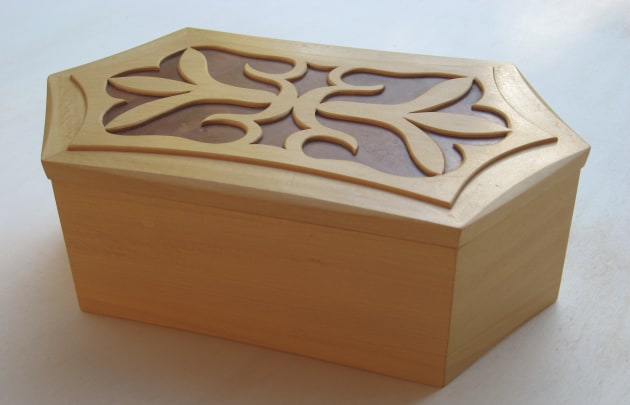 Dragonflies are a motif that Tim uses often in marquetry and as cut-outs, and there is a direct inspiration. ‘In my yard big swarms of dragonflies can settle in my yard for a while. When the sun is hot they’ll be darting around. I just observe their wings and how they stir up the air around them.’ 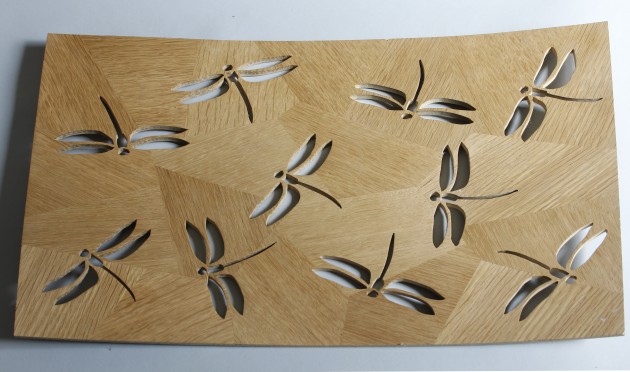 17. Sample for a cabinet, where dragonflies are cut into a parquetry background of white oak that uses varying grain directions to mimic air movement. ‘I love working with grain and the reflective characteristics of wood,’ says Tim.

Photo 17 shows a sample for a cabinet, where dragonflies are cut into a thick veneer parquetry background of white oak where varying grain directions mimic that air movement. Bevelled cuts give a shadow line. 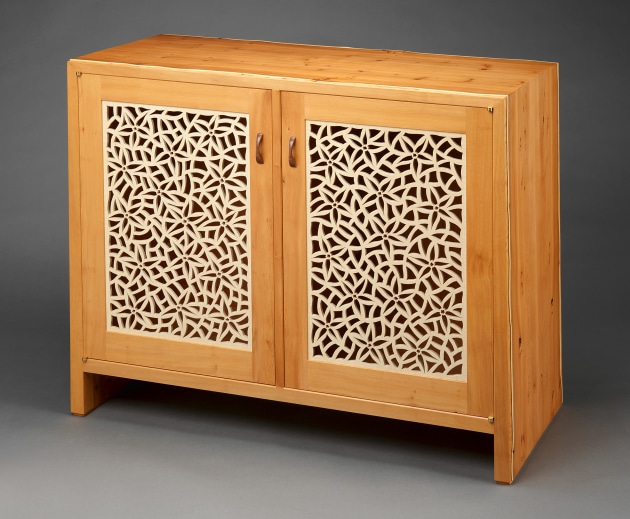 18. The pattern on the door panels of this cabinet are scrollsawn however the material is thicker being made up of five layers of 2mm thick veneer. The effect is flowing but did require plotting out to achieve consistency. Photo: John Polak

This technique involves sawing intricate patterns into plywood made up from thick veneers. The framed door panels in the cabinet shown in photo 18 were created from five layers of 2mm thick veneers. The overall thickness of the plywood is thin but strong enough to cut intricate shapes into.

In this case the pattern was drawn, starting with a floral motif that ‘got scattered’ and linked with a matrix. The main challenge here, Tim says, is being able to saw smoothly and accurately without having to stop halfway through. Predictably the small centres were tricky.

It took around a week to pierce carve each panel and even though the very fine 30tpi blades Tim uses on his DeWalt 21” scroll saw leave few saw marks there was still a good deal of time involved in the clean-up.

The ideas that Tim is driven to express through his work reflect his observations of the world as an artist. ‘When I latch onto an idea I really can’t let go and I’m compelled to just carry it through. Having the confidence and courage to carry an idea through can take many many weeks, and keeping your enthusiasm to see it through to the end is as much a challenge as anything else.’
There are many technical and artistic challenges associated with this kind of work, but perhaps the greatest of all is having the patience and perseverance required.

Unless otherwise noted photos are by Timothy Coleman.

Learn more about Timothy Coleman at www.timothycoleman.com and Instagram @timcolemanfurniture