The science: why wood moves

Wood comes from living trees and all of its structural components contain water during its growth and life. More than half of the total weight of the structure is water. When the tree is cut and processed, water loss immediately begins. This drying out can continue for a long time and with it come major changes in the dimensions and physical properties of the wood. Understanding and allowing for these changes is necessary when using wood for exacting purposes such as furniture, flooring or works of art. A large proportion of the water in wood is removed during the drying process and that gives rise to changes in dimension, but that’s not the end of it. More changes occur after drying and these changes are often the main cause of problems such as sticking drawers or doors, warped furniture panels and gaps between floorboards (photo 1).

Dry wood absorbs water when submerged and can cause swelling or an expansion in size, e.g. in wooden boat construction the swelling prevents water entry as opposed to a costly disaster if a wooden floor becomes flooded. Water also exists in air as a vapour and can cause subtle dimensional changes in ‘dry’ wood. 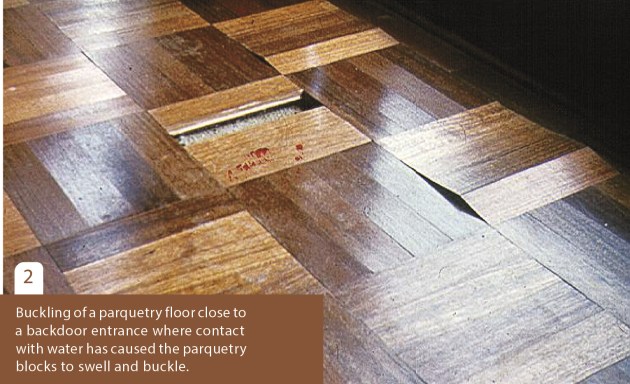 Wood consists principally of tiny tapered, cylindrical cells, having a definite wall thickness and central space. The cells are arranged parallel to one another and generally in the direction of the axis of the stem. The cells are laid down in the tree in such a way that no air spaces exist between them. However, sap (water and nutrients) can pass between the cells through specialised structures (pits or perforations) to provide water from the tree-roots to the leaves mostly along, and in part, across the stem. The relative thickness of the cell wall to the width of the central hollow part of the cell (lumen) determines the density and many other physical properties of wood.

Mostly liquid water (free water) and water vapour is found in the lumens of cells in the living tree or just after the tree is cut down. The cell walls also contain water bound to the molecules that make up the cell walls (bound water). Drying the wood removes free water from the cells permanently unless it comes into contact with liquid water again. Further drying will remove bound water thereby eliminating all the water from the structure until it is oven- or bone-dry. Moisture content is calculated as the weight of all the water in the sample relative to the weight of the oven-dry wood and it is usually expressed as a percentage.

When wood is dried to a point where no further free water remains it is said to be at the fibre saturation point (FSP), i.e. all the water from the lumen spaces has been removed.

The water attracting nature of wood is responsible for wood movement. This comes about from the sugar-based compounds (cellulose and others) that make up the cell walls. These compounds are laid down in the cell wall in long chains which are closely spaced and straight in some parts and disordered in others as shown in fig. 2. Water molecules are only found in the disoriented parts. When all the water molecules are removed by drying, the space they occupied contracts. Conversely, when water is taken up, the structure expands thus giving rise to shrinkage and swelling. The water molecules closest to the wood molecules are held most strongly. As more water molecules are added the force of attraction reduces and the network swells up until it becomes saturated thus leading to the FSP.

In addition to the sugar-based compounds other more complex chemicals known as wood extractives are also found. Many species also contain different types and amounts of wood extractives, e.g. teak and redwood heartwood has a high proportion of extractives compared to pale timbers such as shining gum and mountain ash. Wood extractives are laid down in cell lumens and also within the cell wall—in among the cell cavities that are responsible for dimensional movement. Depending on type and amount, they tend to have the effect of reducing shrinkage or swelling by their bulking action and are a major factor that are responsible for reducing FSP moisture content below the approximate 28% average for all species.

When green wood is first dried, usually little or no shrinkage is expected while the free water is being removed until FSP is reached. If drying continues ‘normal shrinkage’ will occur. However, in practice wood does not dry evenly. The surface layers will dry first and attempt to shrink, but will be impeded by the wetter interior, thus setting up stresses that modify the overall shrinkage unless special drying procedures are used.

Apart from the drying process, the movement of dry wood mainly results from changes in moisture below FSP. Additional movement can come about through the release of locked-in drying stresses or, in bone-dry wood, through temperature changes. Release of locked-in drying stresses as ‘spring’ can be significant especially when ripping wide boards into narrow sections. On the other hand, temperature related movement is so small that it is totally overwhelmed by even small changes in moisture.

Every piece of wood must shrink or swell when subjected to moisture change except when it is in the green condition. In practice woodworkers can overcome the problems caused by wood movement by employing specific construction techniques or by using manufactured boards.

In practice, wood shrinkage tends to be lower than the shrinkage quoted in text or data books. The reason for this is that the size of the sample makes a difference; the larger the sample the greater the effect. Unless the sample is very thin and dried very gently, lower shrinkage occurs because the outer part of the wood is restrained from shrinking by the inner, as-yet-undried part thereby giving rise to drying stresses. These drying stresses must be relieved by equalisation otherwise they can cause distortion in later processing.

Shrinkage along the grain (longitudinal) resulting from sloping or cross grain and abnormal wood arising from trees grown on hillsides, from leaning, or wind blown stems is an exception although this occurs in limited cases. In comparison with normal wood, shrinkage along the grain from such trees can be 10–20 times higher, and across the grain the shrinkage is slightly lower in softwoods and higher in hardwoods.

Considering shrinkage across the grain, some examples of different shrinkage ratios for a group of species are shown in the table below. Species with high ratios are expected to present more problems with movement in the tangential direction than ones with low ratios. The latter also tend to have a good deal of wood extractives. A ratio of 1.0 would be ideal meaning that the sample would move uniformly in both directions.

Ignoring the small shrinkage in the grain direction, the effect of unequal shrinkage in the tangential and radial directions has a profound effect on wood behaviour. The first major implication is that for designing with solid wood; this high variation in the different structural directions must be understood and taken into account.

The wide part of a quartersawn board is radial and the narrow part tangential (thickness). On the other hand, the wide part of a backsawn board is tangential and the narrow part (thickness) is radial (fig.1). Because shrinkage is higher tangentially, backsawn boards will tend to shrink more in width than the same size quartersawn board. In addition, on average, wide boards that are twice as wide (or wider) as they are thick will tend to show greater loss in width after drying irrespective of the direction of cut. This shows why wood composites with their relatively uniform movement in either direction are more dimensionally stable and given to use in industry.

Common problems include cupping and warping when wood is removed from one face or side of a board throwing out of balance built-in seasoning stresses. Another reason for cupping and movement may be attributed to an unequalised moisture gradient with a wetter inner core being exposed during remanufacturing or planing. The wood with higher moisture content will tend to dry out, shrink and therefore cause the board to cup or distort. A similar situation may occur if the face of a board becomes wet—the wetter face will swell and bend in a convex shape.

Another problem may arise with tight cramping of floor boards with over-dried wood destined for specific demand markets such as the US or air-conditioned offices. If this wood is laid in summer and unless the premises are continuously air-conditioned, in winter when the relative humidity is high, the boards will tend to swell and the floor will either buckle or the boards will be crushed. When the boards dry out again, they tend to shrink and unsightly gaps may result.

Similar problems can arise when either the underside or topside becomes wet and dries out. Another example may occur in furniture manufacture when sides of boards are glued to make a larger panel. Swelling will increase at the glue-line as a result of the higher moisture and cause the wood to swell at the joint. If the joint is left to dry thoroughly there will be no problem, the slightly raised joins can be sanded off. But if the joins are sanded prematurely before moisture has equalised, and the panel is veneered, even small movement can be detected on veneered surfaces as the joins at the glue-line subsequently sink in as the wood dries out fully.

Understanding wood movement will help wood users to overcome the problems which may result from it. Some of the main points to remember are:

• Target the moisture content of the timber to approximately half way between the extremes of EMC that it is likely to experience in use. Specifying a desirable moisture content range of dried product of e.g. 10–14% for furniture in normal domestic use can do this. Alternatively, wood should be allowed to equalise before it is processed if its moisture content is not in the desirable range, although this may take some time. This why expert makers praise wood that has been ‘under the house for years’.

• Choose species with low unit shrinkage (shrinkage gradient) and low FSP for applications where large swings in moisture content are expected; the species needs to show a small change in shrinkage or swelling for a unit change in moisture content. This information is difficult to obtain but it is something that experienced woodworkers know, e.g., species like western red cedar and redwood, teak, Huon pine, birch and Norway spruce show low movement. Information from an old CSIRO publication* is highly technical but probably the best source of this information for Australian timbers.

• If visually acceptable, radial-cut or quartersawn wood may be better than tangential (backsawn), where large movement is expected.

• Design to allow for movement particularly with large panels. Finishes slow down moisture uptake or loss, but need to be applied on both sides
to prevent distortion.

Knowing something of the science of wood movement can help woodworkers reduce or eliminate potential problems.

Dr Jugo Ilic worked as a wood scientist at CSIRO for 36 years. As part of his research activities he authored the CSIRO Atlas of Hardwoods and curated the Australian Wood Collection. He has written several articles for Australian Wood Review, some of which are shown above right. This article was first published in issue 50, 2006.