Above: Simeon Dux’s Flame Table in walnut and flamed maple.

As a furniture designer and maker, I’m constantly challenging myself and being challenged to create new and different pieces that deliver both functionality and style.

A maker at heart I’m drawn towards traditional design elements, and techniques that have stood the test of time with inspiration coming from many sources. On the flip side I understand the benefits that modern machinery and clean lines can bring to a piece, so with a lot of my work I aim to strike a balance between the two.

My latest piece stemmed from my appreciation for the work of the New England, Pennsylvania, and Rhode Island cabinetmakers at the end of the 18th century. Elegant and well-proportioned pieces with beautiful carved sections and elaborate mouldings were their speciality.

The highboys and double chests made from 1740 to1780 often had finials of different designs adorning their pediments. In particular, the twisted fluting of the flamed finials that spiralled and tapered became an element I wanted to try to incorporate into a piece, in one shape or another.

The challenge was how to integrate this detail; the overall design needed to appear simple enough so as not to detract from the fluting element, but also not be so minimal that the fluting looked out of place.

I decided on a small occasional table, three legs, no stretcher system, with a simple top rail set up and a central hexagonal post as the connection point. The legs would taper to half-circumference and splay at 6° for an elegant stance, while figured maple ‘socks’ would visually elongate them. I wanted the top, with its large cove underneath, to appear to be hovering lightly over the legs, and the round-over profile on the topside would help give a reserved initial appearance.

With all this in mind I set to work. I chose to use US walnut. It’s beautiful and I really love working it. The smell reminds me of good times – and a few very challenging projects, but its workability and stability are most important to me. It pairs well with other timbers, in particular maple and oak, the former of which I decided to use for the top and socks. 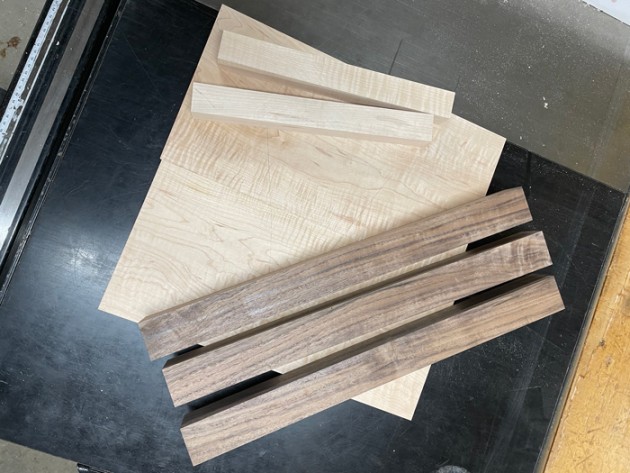 1. Wood for the table was selected, sized and grain matched.

I’ve collected a stash of nice boards over the years in preparation for projects such as this and found some nice, lightly figured walnut and quite a spectacular board of flamed maple (photo 1).

From the ground up

2. Tenons were turned for to attach the maple ‘socks’ to the legs.

First step was turning the tenons on the end on the socks (photo 2). These then were inserted into the round mortises drilled into the bottom of the leg blanks. 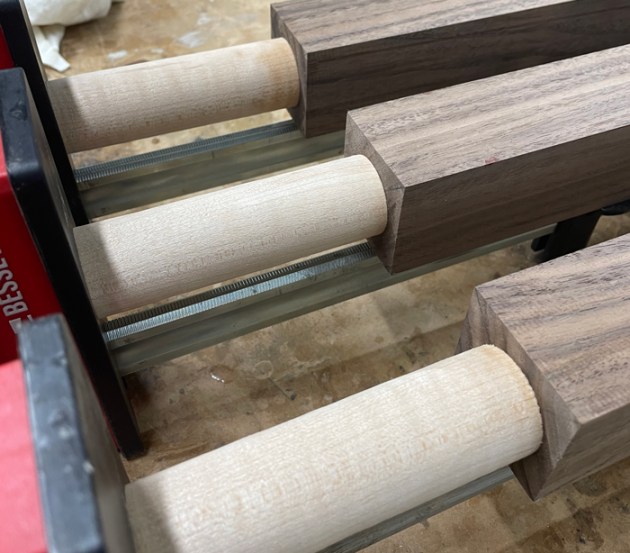 3. Mortises were drilled for the rails, and then filled with blanks for the turning process.

Mortises were drilled at the top of the legs to take the rails, and then filled with blanks for the turning process (photo 3). Once socks were glued and the corners chamfered, I turned the legs into the desired profile; tapering, but with the allowance for the fluting to project further out than the rest of the leg.

The layout was initially challenging and it took three prototypes to achieve the consistency of the desired pattern. I began by marking the number of flutes on the top and bottom of the area to be carved (seven in this case), then marked straight lines connecting them together. This area was then divided up into three un-equal sections, starting larger at the top and getting smaller, which would allow the spiral to tighten on its way down the leg.

From this point the challenge came to find something to trace that would stay straight laterally but be able to twist tightly around the leg. After trying unsuccessfully with a few different ideas, I gave some iron-on edge banding a shot and it worked very well. 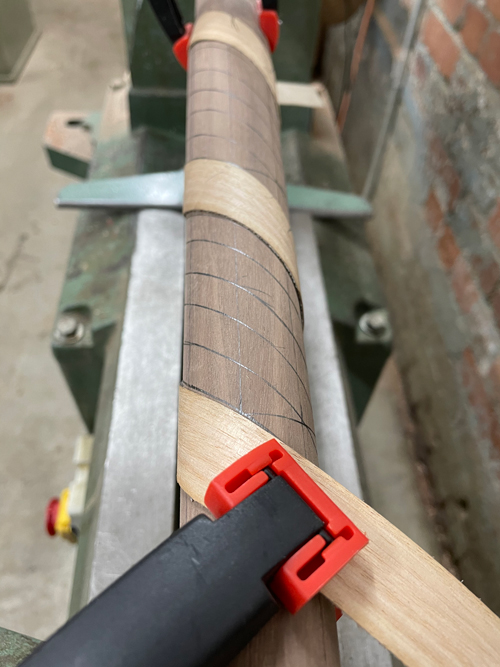 4. The flutes were marked against some wrapped around iron-on edging that was clamped in place top and bottom.

I clamped the edge banding on the first point at the top of the leg and wrapped it around the leg being sure to match up with the same line at each intersecting mark, and finally clamped it on the same line at the bottom (photo 4). It is important that the same side of the banding hit the marks in all four spots. There was some very slight variance in the width of the flutes, but I found it to be consistent overall.

As most of my work is one-off commissions, I generally don’t have to make many multiple components and therefore my jigs are usually very simple – just good enough to make the four or eight of the required part. So, in this case, with no plan to make multiples or set it up for production, I opted for a hand carved technique, which in moderate amounts really appeals to me. If there is an option for me to use a hand tool over an electric tool and still hit the same quality and timeline, I’ll take the hand tool any day. 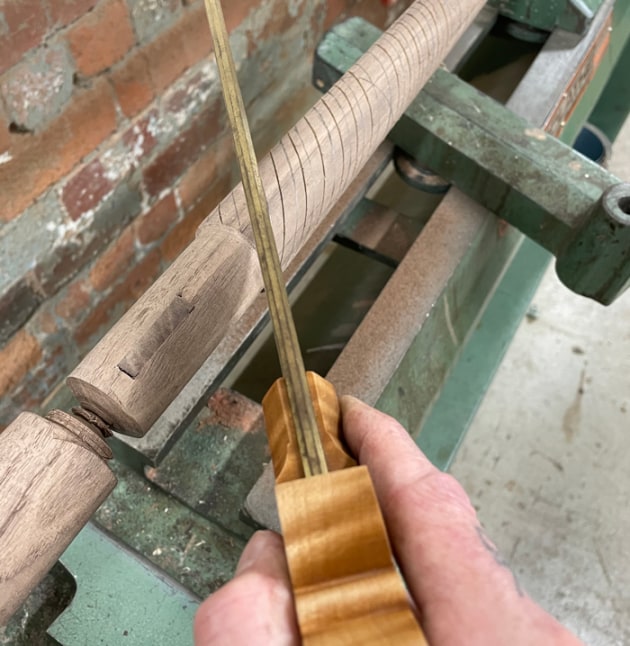 5. A tenon saw was used to cut a line in the centre of each of the flutes.

I used a tenon saw to cut a line in the centre of each of the flutes (photo 5). This allowed me to separate the two grain directions for the next step, carving the up-cut and the down-cut (photo 6). 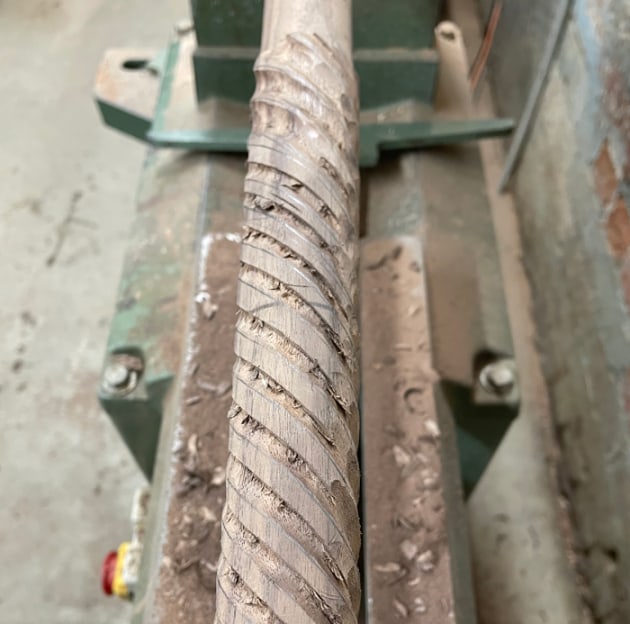 6. The central line was used to separate the up and down grain directions when the flutes were carved. 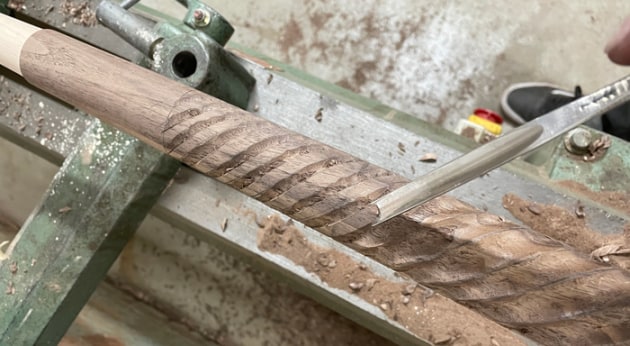 7. ‘I started working my way first up the lower side of the cove, then down the upper, while being careful not to take off my spiralling pencil line.’

With a carving chisel that matched the size and radius of the flutes as close as possible, I started working my way first up the lower side of the cove, then down the upper, while being careful not to take off my spiralling pencil line (photo 7). This was followed up with a rat-tail rasp which helped to clean up and define the coves while maintaining a straight twisting line.

The idea of creating a jig for this on the lathe was floated, but with the flutes tapering in width, and the spiral tightening on its way down the leg, my brain began hurting with just the idea of it. The rasping was time consuming but fun, and enjoying the process is very important to me. It’s kind of when I’m in my element. Whether it be hand tool work or machining, seeing the parts take shape and putting things together is by far the most exciting part.

8. Different sized dowels wrapped in sandpaper help maintain the shape of the flutes while sanding.

After the rasping it was file, then sand, sand, sand. A couple of different sized dowels wrapped in sandpaper help maintain the shape (photo 8).

I wanted the flutes to appear to grow near the top of the leg and t hen fade away again towards the bottom, referencing the popularity of this kind of detailing coming and going. With the fluting on the legs now done, I trimmed off the excess on the top of the leg, shaped the domed ends, and removed the blanks from the mortises. 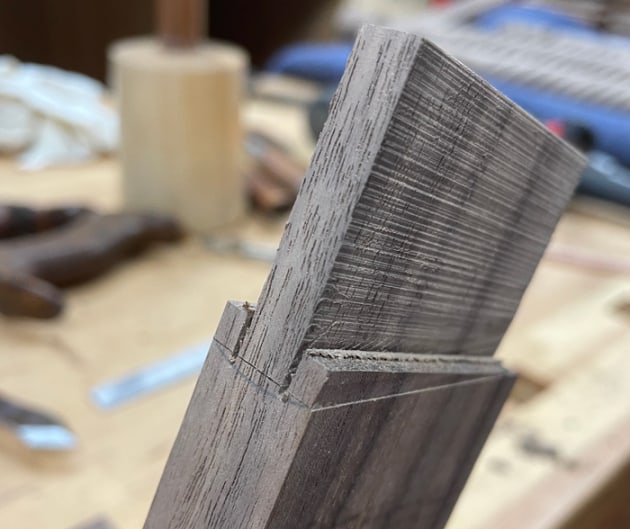 10. The tenon shoulders were then coped to the radius of the leg, allowing for the splay. 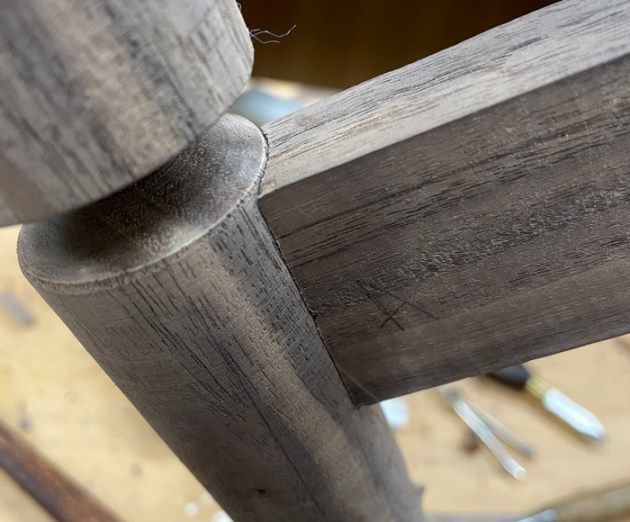 11. Showing how the rails were shaped to fit the legs.

The rails were milled, tenons cut on the bandsaw (photos 9, 10) and fitted to the mortises. I chose to cope the shoulders to the radius of the leg, which was a challenge with the 6° splay (photo 11). 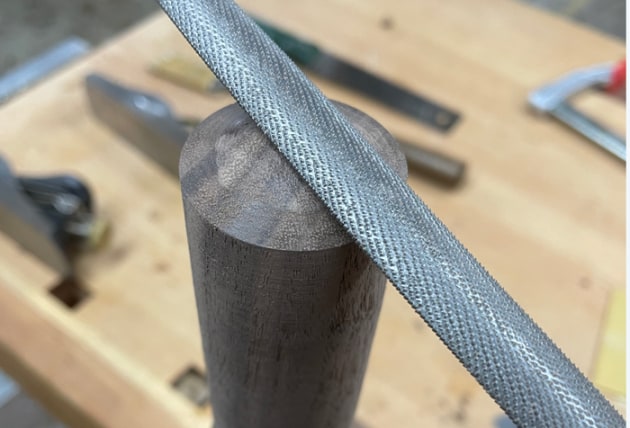 With hindsight, a housing into the leg at the start of the project could have saved a bit of fussing about. I used a rasp to dome the top of the legs (photo 12).

A pattern shaped the cove accurately on all three rails and loose tenons were used to connect the opposing end to the central column. Care was taken to align these mortises correctly, as a slight twist at the top would be exaggerated over the length of the leg. 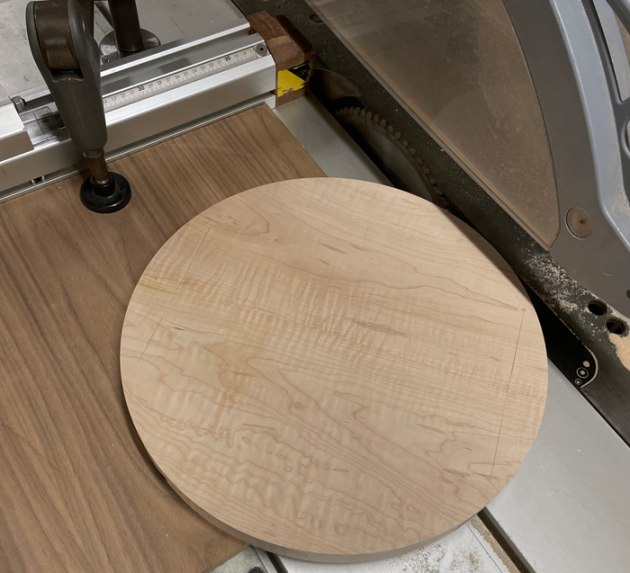 13. The flamed maple was thicknessed and bandsawn to shape close to the line before using a shopmade jig to true on the panel saw.

The top and socks were cut from the same board of highly figured flamed maple, then milled and oriented to conceal the joint. I marked out the circle, bandsawed close to the line and then used a shopmade jig to cut a true circle on the panel saw (photo 13).
The cove underneath is set back quite far from the front edge with the aim of having the top project out and appear to rise over the domed leg tops, creating a floating appearance.

This was achieved by using a core box bit which I incrementally stepped further in until the desired shape was reached (photo 14). The key with this process is to have the round top rotating off two contact points, in order to create an accurate reference the entire time. The technique worked well, and the only issue I encountered was a little burning when I stopped spinning. Maybe I need to refresh my DJ-ing skills from my time at Roller-City in the late 90s.

Gluing up is something I’m always nervous about. Preparation is key. As I’m sure everybody reading this has encountered, it can all be perfect in a dry run, but the addition of glue always seems to make for a frantic moment or two.

I’ve learned a few tricks, one of which is to try a few smaller glue ups rather than a complex one that makes you sweat. I employed that idea with this project. The rails went into the legs for the first glue up, then the rails into the central column for the second. Some coved and tapered cauls could have helped with this, but I managed three legs just fine without.

I chose to finish the Flame Table with my favourite finish, rubbed shellac. Classic, functional, organic and easy to repair, it’s my go-to for most pieces. Finally, I attached the top to the base with three slotted brass screws. The holes were enlarged from the topside of the rails allowing the screws room to wiggle with seasonal movement.

The table was a fun project but also enabled me to get an idea out of my head and into a physical form. I loved the new techniques and processes I tried and have learned a few new things along the way. The final product is nice and there are things that I would like to explore and re-visit which is one of the greatest things about being a designer maker. The evolution of an idea is exciting and continues to drive me to try new things and explore new opportunities.

Simeon Dux is a Melbourne furniture designer maker and was Wood Review’s overall 2020 Maker of Year award winner. This year he is one of the judges for Maker of the Year 2021. Learn more about him at www.simeondux.com and Instagram @simeondux