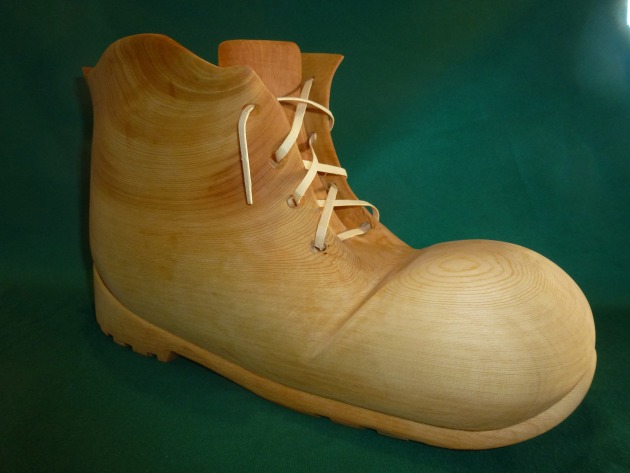 Some years ago I saw a carved boot and thought one day I would like to make one. The time and inclination to do so arrived early this year, and I found a suitable sized piece of Huon pine log under the workbench at the Defence and Veterans Workshop in Hobart to make a life size boot.

After chainsawing off a 400mm piece and resawing on the bandsaw to a rough rectangular block I was ready to start. However it still felt quite damp in the middle of the block, and within a couple of hours I noticed it was starting to open up and small cracks were appearing.

Being such a perfect piece of Huon pine for my project I thought I had better get stuck into it straight away. I marked and cut out the side elevation on the bandsaw, cut the sole off the blank to the desired shape and securely mounted the blank in the drill press. I then drilled a series of holes down through the ankle section with a large forstner bit to reduce as much internal tension in the wood as possible, and also to get rid of most of the damp wood. I managed to save it from cracking further.

Starting on the inside, I used 40 grit sanding flappers mounted in a hand drill to clean out and shape the sides, back and tongue. By doing the inside first, I found it easier to design the ankle section and flareovers at the top of the boot, which then allowed the outside shaping to simply follow contours of the interior.

The most time consuming part was removing the wood along the two narrow recesses between the tongue and the eyelets. This was acheived by using a Dremel hand piece with a small cone shaped bit. Care was needed doing this as the bit tended to grab and wander off on unintended pathways, so a very low speed was needed.

Having sanded all over the boot with 320 grit it was time to drill the eyelet holes, glue the sole back on and give it two coats of Danish oil. Initially I decided to use leather laces but then thought it might be more appropriate to try making some Huon pine laces instead to retain the Huon pine look throughout. 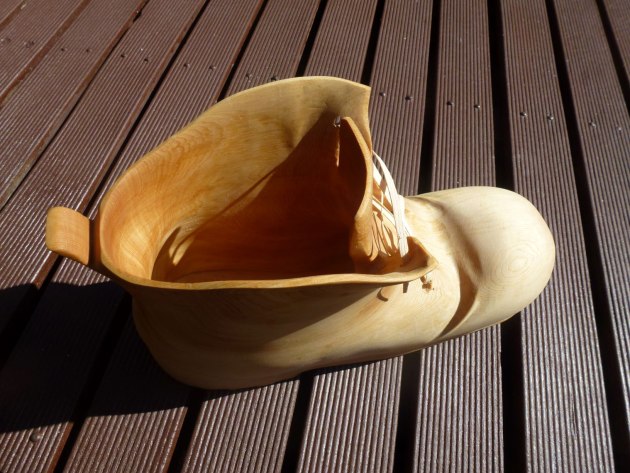 Using the bandsaw, I cut a 1mm thick slice of Huon pine 600mm long x 30mm wide which I sanded both sides with 40 grit. I knew it would be difficult to cut thin lace strips as even a surgical knife would tend to break away the grain on a long strip. To get past this, I soaked the slice in cold water for 10 minutes and put it through the paper shredder - this worked superbly, giving a clean straight cut without any grain breaks.

The next step was to soak the lace strips in near boiling water for a few minutes to make them more pliable and then hopefully thread one through the eight eyelets. The first two strips decided to break as they had to double back on themselves in a very tight radius, but the third time I was lucky and with a little massaging and coaxing the lace went in without breaking or splitting. 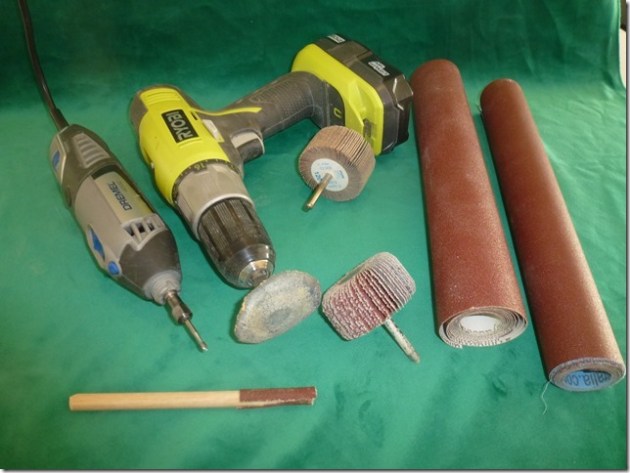 Making the boot took from January to March this year in sporadic short sessions from start to finish, probably about 20 hours all up. I only used power tools, no chisels or carving knives, and heaps of sandpaper 40 to 320 grit in two metre rolls still rolled up, as I found the long rolls easier to use this way to contour the shapes.

It was suggested I put a pot plant in the boot, but I shall be retaining it as-is for a keepsake.

Ray Collins is a Tasmanian woodworker who lives in Hobart. “I am a retired Vietnam war veteran who found working with wood to be an excellent therapy and pleasurable pastime. I have been working with wood for over 50 years and lucky to live in Tasmania where we have such a great diversity of timbers, especially minor species. My favorite is Huon pine, it is like hard butter to work with and has that wonderful, unique and unmistakable aroma." 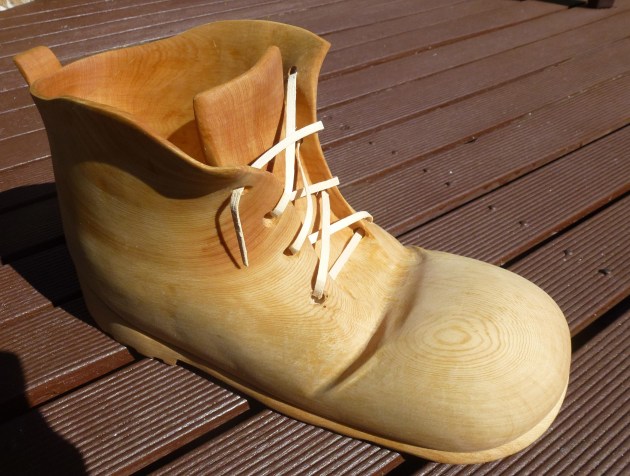