How to Make a Zigzag Chair 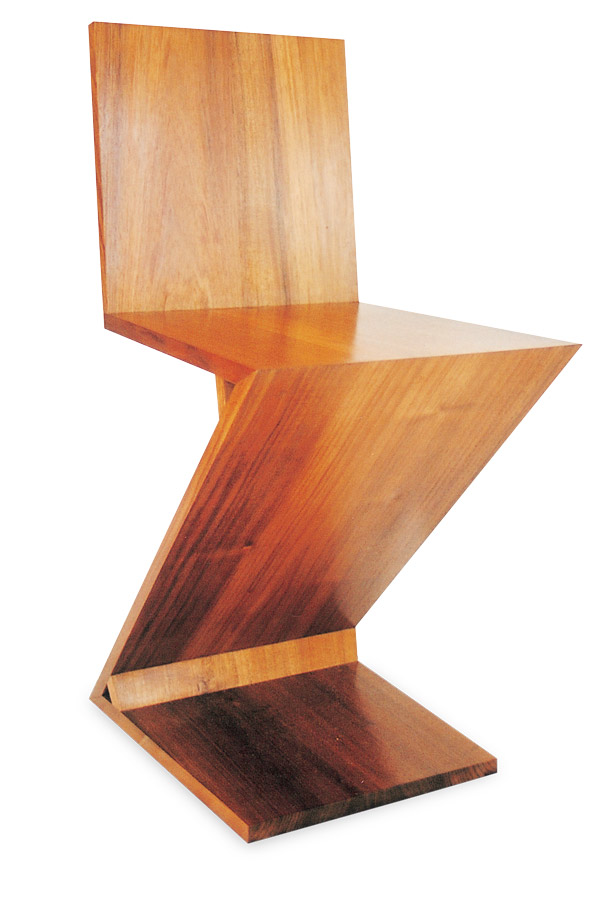 I was amazed when I first saw the Zigzag chair by the Dutch architect Gerrit Rietveld, and I have since made three. The Zigzag chair is one of numerous revived furniture classics by modern architects (including Macintosh, Le Corbusier and Frank Lloyd Wright) that are being made commercially and sold in up-market Australian outlets. As they also sell for up-market prices, making your own is a good way of acquiring one. 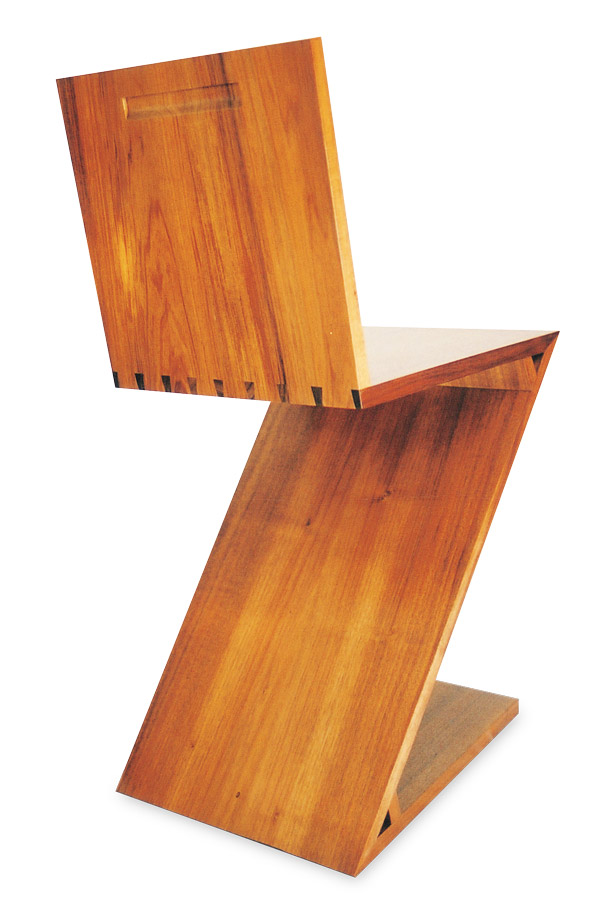 The Zigzag chair appears unable to support its user, as both lean into open space—an intriguing prospect for new users. However, even standing on the seat at the back edge doesn’t tip it, because the centre of gravity is within its footprint. As the chair flexes a little in use, it’s more comfortable than one expects when sitting and leaning back on uncontoured boards; as well, they stack tidily and are a visual delight.

Rietveld started work as a furniture maker, and lived all his life in Utrecht where as a city architect he designed hundreds of buildings, pioneering open plan domestic architecture. His chairs include the Red-Blue chair, the Berlin chair, and the Zigzag chair designed in 1934.

Said to have been conceived to be made of one flowing piece of plywood, manufacturing difficulties led Rietveld to make it from four sections: a foot, leg, seat and back. The first three were joined at 45° with mitred butt joints, each held together with a row of bolts through a triangular wedge. These bolts also served to clamp the joints if glue was used, but my chair has only three countersunk screws coming through each mitre joint, with the wedges simply glued in place at the time the mitres are glued and screwed. Rietveld’s seat-to-back joint was originally several large glued dovetails, but finger joints, again without hardware, are sound enough and look fine.

The following description outlines the order of work to make a Zigzag chair. I made my first after finding by chance a Dutch book with English translations which has measured drawings and some construction details*.

Because of their width, each of the four 19mm thick sections of blackwood (Acacia melanoxylon) has a butt joint along its centre. As these joints are likely to be apparent when finished, you might wish to have them line up from section to section (especially at the clearly visible back-to-seat joint. If you think it might be difficult to align these joints at the dovetail or mitre joints, then consider using two boards to create the required width in one section, and three or four boards in the next section. In fact, hand cut and jig cut dovetails or finger joints can be made to align easily, but it needs to be remembered and thought through when setting up to cut the joint. 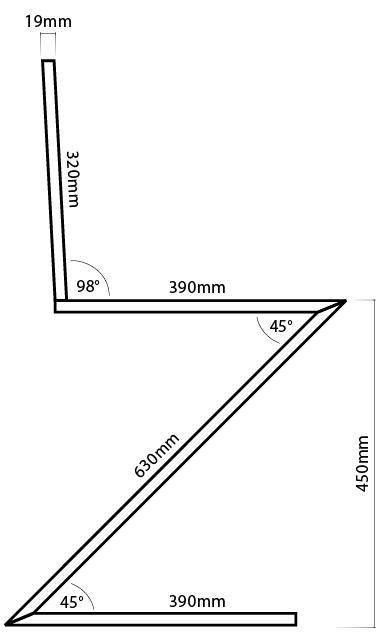 Before the mitre and dovetail joints are cut, ensure that the sections are flat and without winding. If they are not flat across their ends the mitres will have gaps in them, and the dovetails won’t close up evenly—unsightly and weak. The three sections with the bevel joints need to be the same thickness or the bevels will have different depths.

The wedges which strengthen the joints are cut from the ends of the longest sections (the seat or the leg) on a tablesaw with the blade tilted to 22.5°. Keep in mind that the grain runs across the wedges, not along their length. Don’t rip them off the side of the boards, but cross cut them off the ends. When viewed from the side of the chair, these wedges measure about 38mm on their longer faces and about 25mm on the shorter.

The mitre bevels are cut at 22.5°, which when glued to the 22.5° bevel on the adjoining section produces a 45° angle. The bevels need to be cut at exactly 90° to the sides of the sections otherwise the sections will be offset. To compensate for this the grain would have to run off-centre instead of front to back.

It is easiest to cut each section to length while it is still rectangular (before it’s tapered). As the chair’s back is not tapered, its joint can be cut first, allowing any mistakes to be crosscut off before trying again (if the section is long enough). Similarly, three of the bevels could be cut before the final crosscut to length, which allows for trial runs of the bevel cut.

The chair leans back a little, at about 98° to the seat. This means that when you cut these two sections to length, their ends need to be cut at 98°.

Next, the dovetails are cut. These can be done by hand or with a dovetail jig. If using a finger joint, Triton owners can modify the finger jointer setting by gluing or double sided taping two lengths of packing wedges into its clamp to hold the pieces 8° off the vertical. If tear-out can’t be avoided in machining these joints, it will be least visible at the back and under surface when the joint is assembled. 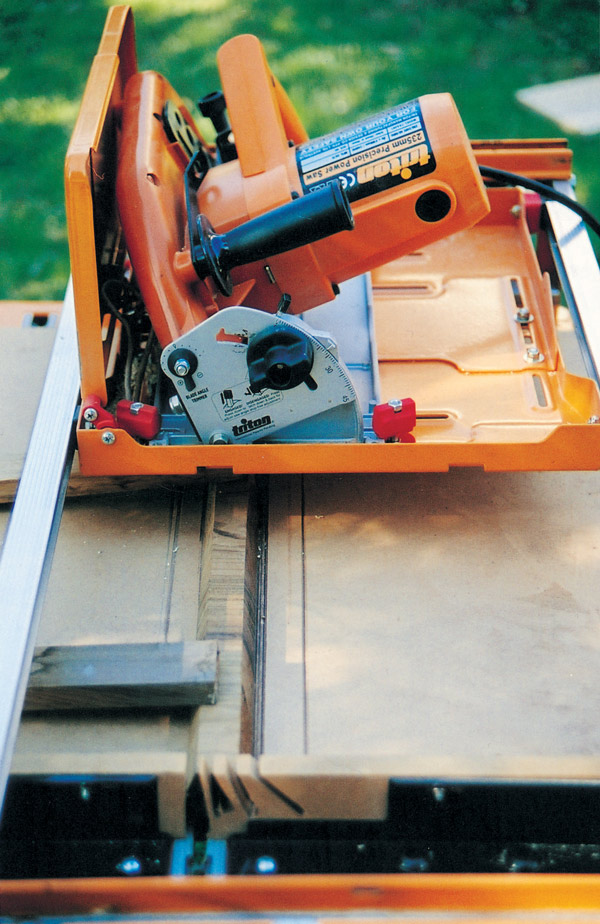 Now the three lower sections need to be tapered on both sides. This is easily done on a tablesaw by moving the fence well away from the blade (but still parallel), then placing a ply or MDF ‘sled’ against the fence, just clearing the blade. The workpiece is fixed onto the sled with tape, stops or hot glue holding it skewed slightly so that as the sled is pushed along the fence, the part that hangs over the sled is taper cut.

You need to handle the pieces carefully so as not to damage the fragile bevel joint edges, at least until they are glued up and softened a little with sandpaper, making them more robust.

I used urea formaldehyde to glue up these chairs. The foot-to-leg joint is glued first by placing the rear surface of the leg down on the bench with the edge to be joined overhanging the bench end (to allow clamps to be applied to the joint). As the clamps would slide off this joint with its 45° angle, wedged blocks from scrap are taped or hot glued to the boards so the clamps have parallel surfaces to push against. With the joint clamped up dry, three screw holes are drilled through the bevels, and the short grain wedge is slid into place to see where to apply the glue for this wedge. Then separate the parts, apply the glue, assemble the joint, drive in the screws and apply the clamps. The screws come in from the under surface of the foot, so are concealed as well as being countersunk and plugged.

The leg-seat joint is assembled in a similar way, with the screws coming in from the front surface of the leg. Again, the 20mm screws go through the bevels, and not through the wedge.

The wedges at these bevel joints leave a small triangular gap about 20mm high which adds to the visual interest, and probably allows more support for the bevel joint (as it shortens the cantilever). But the chair as made by Cassina in Italy, which has held the licence for Rietveld’s designs since 1971, has the wedge triangular shaped and filling this gap.

A recess is routed or carved near the top of the back as a hand-hold for lifting. I make this 130 x 20 x 10mm deep and about 25mm from the top edge.

The finish on this chair is wax over shellac, and there are felt pads attached under the foot. The chair weighs 7kg and used about $120 worth of timber. A pine version weighs about 5kg.

The Zigzag chair is not just a work of art but also a functional and fascinating piece of furniture. Gerrit Rietveld himself used them for casual dining seating in his holiday home. I’m not so keen on his Red-Blue chair, which takes up more floor space and is too hard for comfortable reclining. It’s also harder to get in and out of. The upright Zigzag chair though is a design classic that I’ve enjoyed re-creating and using in my own home.

When John Winder is not making furniture in his Sydney workshop he works as a specialist medico.