Glow in the Dark Light

There’s been an idea brewing in the back of my mind for ages about using LED light strips. They come in one metre lengths that can be cut or extended via minimal soldering, and best of all, they come in a kit complete with wiring and a transformer, ready to plug into a power-point. No need for an electrician as the diodes are part of a pre- glued aluminium strip that can be moulded to any shape that’s just waiting to add light to your life.

I needed something to spur this idea on...and this came when AWR’s editor suggested incorporating a ‘glow in the dark’ resin additive into a project. I did some internet research into what these products are, how they can be applied to wood and what others have already used it for.

Although I really liked what I saw, I wasn’t keen on filling voids in tabletops with something that glowed once the lights went off...there had to be a more interesting application for this wondrous product. These thoughts sat for a few days in my ‘cranial computer’ before one of those eureka moments where all the stars aligned and the world made sense!

The concept was to create a mood light carved to resemble a leaf-shaped profile. This would be wall-mounted, but stand proud so the LEDs could be attached behind to illuminate its outer form and also create a shadow. The piece could then be further ‘highlighted’ if carved lines on its surface were filled with resin mixed with the glow in the dark additive. And so I was off on a journey of investigation, and potential failure too.

For this project I opted to use a board of desert ash which I’d salvaged and slabbed several years ago when our municipal council was clearing noxious weeds from a local creek. Ash invades and chokes our waterways but I love its fragrance, grain and working qualities, so this light could also show how weeds can be used productively whilst being removed from our environment.

To get this project underway I sketched a design on a board that I’d already taken a piece out of for another project and adjusted what was in my mind to suit the remainder (photo 1).

I cut this out on my bandsaw and moved to a belt sander to refine the outer form (photo 2). No matter what your mind conceives as a balanced form, there is always a need for refinement once a two dimensional drawing is converted into a three dimensional object.

I used an Arbortech Turboplane and Contour Random Sander to develop the face of the form. This allowed the shape to emerge faster than I’d anticipated (photo 3).

I also needed to under-cut the back of the form, much as a bas relief sculpture allows the interplay of light and shadow to feature its overall shape and details, and I was conscious of the fact this piece would rely on back lighting to act as a mood light (photo 4). 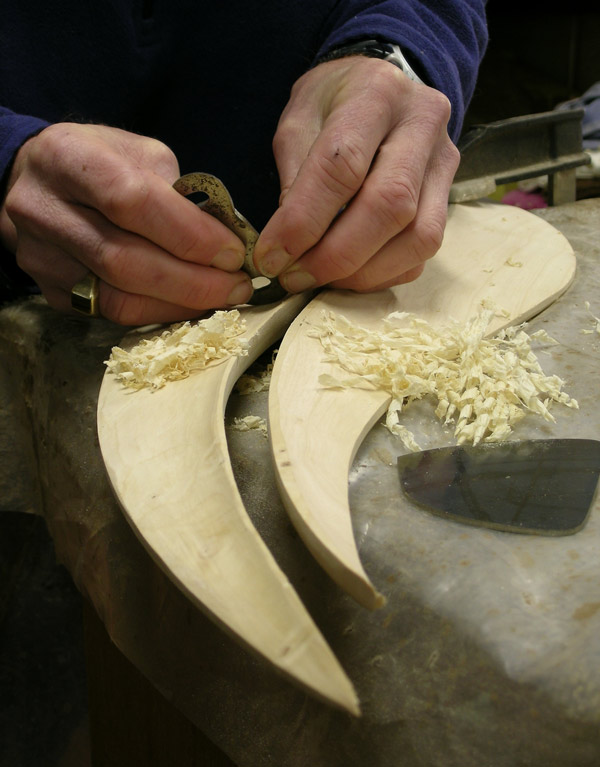 Refining details required hand work and elbow grease, but at least the workshop was quiet for a while. Scrapers enabled me to creep up on concave edges (photo 5), while a range of files, rifflers and carving tools allowed me to refine tight spots both on the front... 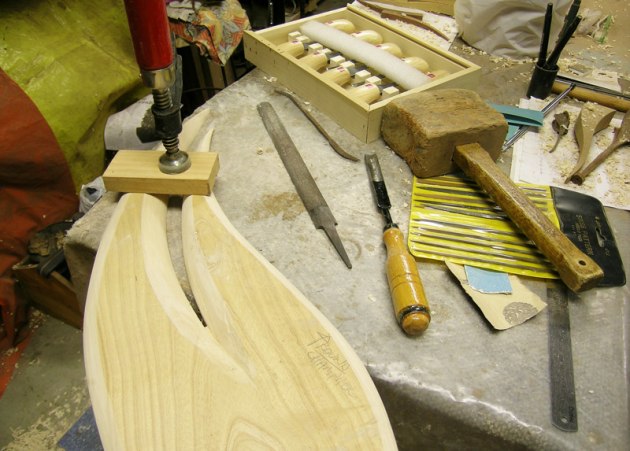 ...and back (photo 6). After that, hand sanding was used to pick up details and to eliminate undulations in the overall surface left by power tools. Seeing this piece would rely heavily on shadows when the light isn’t on, it was imperative to ensure all lines were crisp and flowed smoothly.

Now it was time to mix the glow in the dark additive with clear two-part resin and apply it to lines carved into the face of the leaf form. I intended these to be an interplay of the skeletal structure of a leaf (the veins) and waterways that join and eventually combine to flow as rivers. But first I carved some lines on a sample board and did a trial run to see if all would combine, bond and glow.

The technical information for Luxilum glow pigment advised a ratio of 3:1 between body and hardener (based on weight not volume) which I followed dutifully with digital scales in tow, while the additive information said a 15% mix would work best. I then poured the mixture into my test carving and hoped for the best... Winding up work for the night I turned lights off and you cannot imagine my delight when I noticed the test piece was already glowing, it worked! 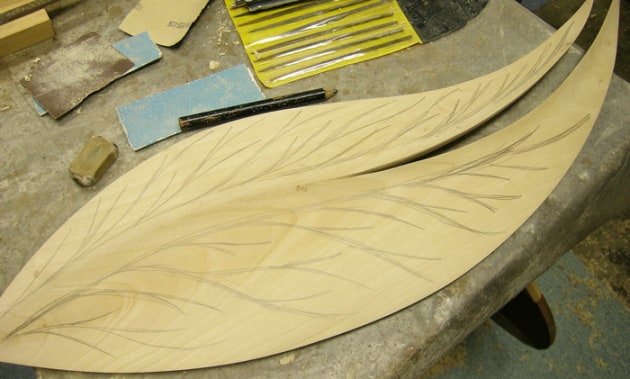 To begin the real thing I drew a series of radiating curved lines running into a main ‘spine’ on each half of the form, reworking the lines until arriving at something I felt was balanced to the eye (photo 7), then attached a holding block to the back so it could be held in a vice ready to begin carving. 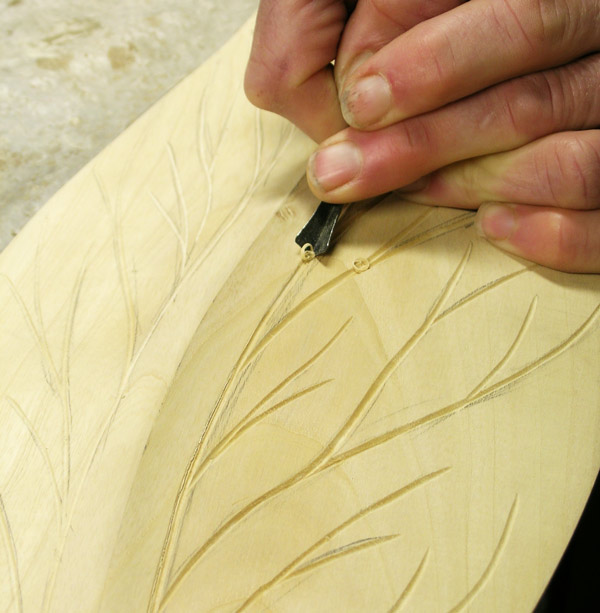 Once all lines were carved (photo 8), I sanded away left over pencil marks and... 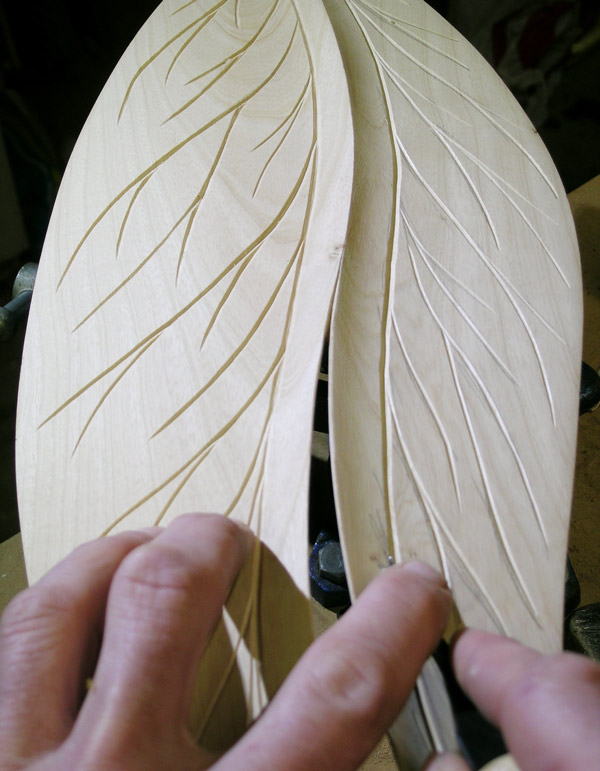 ...with the aid of a strong side light began to refine any that were in need of extra attention (photo 9). 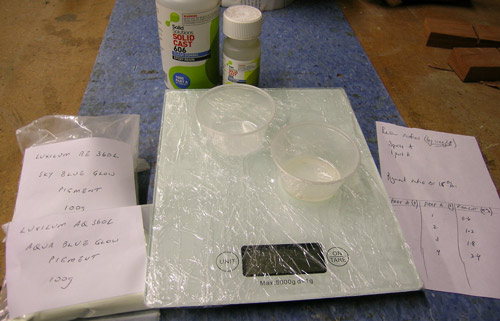 Preparing to mix and apply the resin and glow additive I gathered everything together, including mixing ratios, scales and little stirring sticks (photo 10). Note the plastic wrap on the scales in case of spillages – an idea from the kitchen, not the workshop! 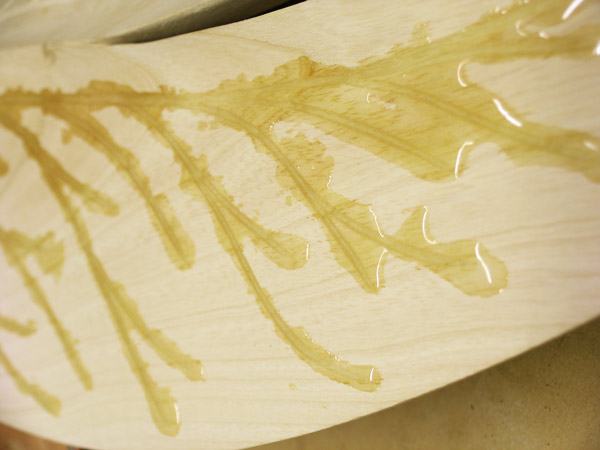 Once mixed slowly and evenly to avoid the formation of bubbles, resin was applied to the carved lines carefully with the mixing stick ensuring all lines were filled with ample excess to compensate for potential shrinkage or spreading of resin as it cured (photo 11).

The resin was left for two days to set and harden and then the excess material was scraped and sanded away, eventually working through various grits to finish sand the entire face of the leaf. Winding up at 320 grit, I also eased the edges and ensured everything felt smooth to the fingertips.

Initially I planned to carve away material from the back of the ‘leaf’ so LEDs could be attached, but it soon became apparent that it would be better to leave the back flat, add a plywood spacer and attach the LED strip to its edge so light could shine out from behind the leaf form. 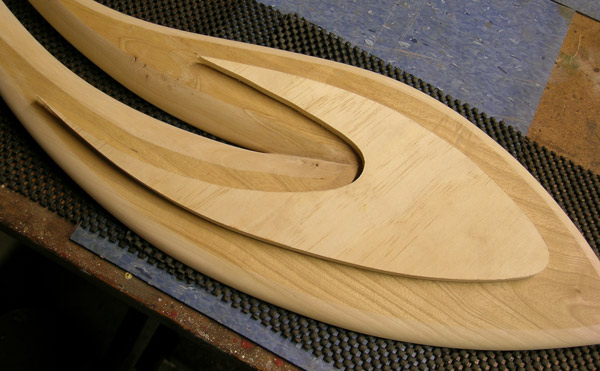 To create a template for this spacer I laid a piece of paper on the back of the leaf and pressed around the edges of the form with my fingers to create an impression of the form so I could draw a scaled down version about 20mm inside the undercut profile. This was cut out, taped to some 10mm thick plywood and once again cut out on the bandsaw before refining on belt and spindle sanders (photo 12).

Adding a backing board

All was good so far; however as is often the case, my ideas evolve as the project develops and it then made more sense to add a backing board.

A 45mm thick oregon board was 13 sawn in half to book-match and then wire-brushed (photo 13) to wear away softer parts of grain and leave hard growth rings prominent which would pick up a shadow line from the LED light. I might have achieved a more subtle effect with a sand-blaster; however I could not access a sand-blast cabinet large enough to accommodate the 800mm long panel.

Not completely satisfied with the amount of light emerging I then added another strip of LEDs and another spacer that was 10mm smaller around its perimeter so it was less likely to be seen from an angle. 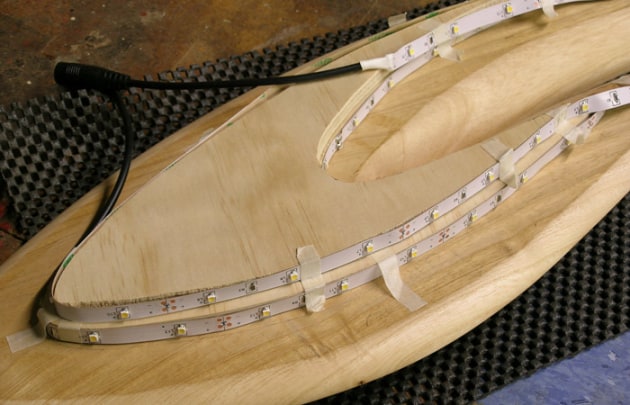 The light strip was taped on to test its effect (photo 14)... 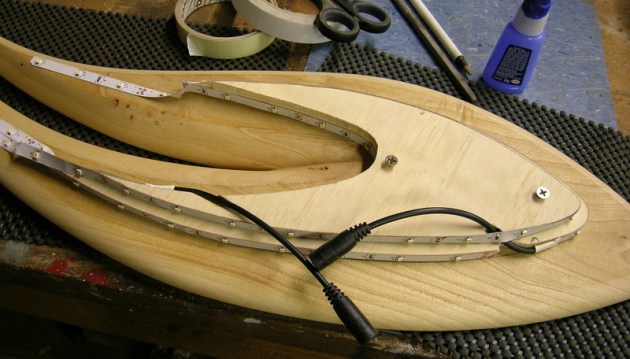 ...before gluing everything in place (photo 15), drilling holes for wires to slip through and finally assembling all components in preparation for the grand test.

Does the light work visually, as a piece of wall sculpture, as a mood light, and does the ‘glow in the dark’ bring a smile once all lights are switched off? For me it does, but I’ve leave it up to you to decide.

Andrew Potocnik is a wood artist and teacher and a regular contributor to Australian Wood Review.