If you’re looking to upgrade to a full size lathe that provides plenty of power and drive, this could be the one for you – but what sets it apart from others on the market? To begin with, there is its name which raises the question of what a DVR is, especially as it is used on other Nova machines including a pedestal drill. Digital Variable Reluctance (DVR) is a computer controlled system that detects extra pressure on the workpiece and increases power to ensure the lathe retains constant RPMs.

The lathe has a direct drive motor so speed variation is all electronic, from 100 to 5000 rpm, however many variable speed lathes lose torque especially in the lower rpm range. The DVR system detects resistance to the workpiece and increases power to maintain constant speed, optimising efficiency so the motor only draws as much power as needed. This also enables electronic auto-braking to bring the spindle to a rapid halt when activated.

The computer feature enables the screen to not only show spindle speeds but also advises of safety issues such as dig-ins and if the spindle lock is in place, where power to the motor is instantly shut down. There are also four ‘Fav’ buttons that allow you to set up to eight of your most commonly used speeds so you can bypass the speed dial and instantly change to the speed you need.

Above: Easy to access operating buttons are housed on the headstock. Forward and reverse options, four favourite pre-set buttons and the variable speed switch are all conveniently located.

Being new to a Nova DVR lathe I began my trial with the handbook to gain an understanding of how it works, especially when the digital display offers options beyond the usual start/stop I’m familiar with. It didn’t take long to gain confidence and understanding as the handbook provides clear illustrations and text.

First inspection revealed several structural features that differ from other lathes. The direct drive motor is housed within the headstock which allows for 360° rotation with indents at 0, 22, 45 and 90°. 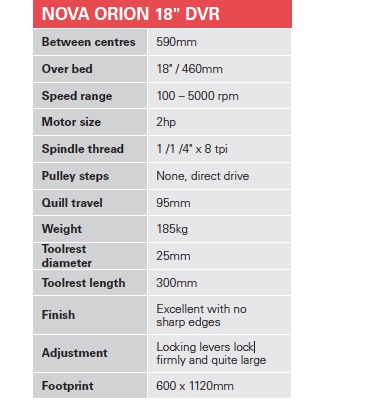 The bed is made in two parts, being bolted together halfway along its length. This enables an extension to be fitted either between these two parts or added to the end which is the more common method. These are described as CAD designed castings with webbing to absorb vibration and maximise structural strength. Each segment is quoted in the handbook as being 20"/510mm. Interestingly this isn’t the only time imperial measurements are used in specifications provided. The spindle size is an unusual 1-1/4" x 8 tpi more typical in the USA which it seems this lathe is targeted at, even though Nova is a New Zealand company.

Aiming for consistency with other recent lathe trials I mounted a 100mm diameter piece of pin oak between centres using the generic drive and live centres that accompany the lathe. The quill has both metric and imperial markings along its barrel providing accurate guidance if you’re using it to drill into wood gripped in the headstock. Applying heavy cuts to the wood didn’t slow the lathe at all, even when I pushed to the point of catching the tool due to excessive pressure.

Above: Swivelling the headstock enables greater access for faceplate work and turning of larger pieces. The solid bed, saddle and toolrest provide plenty of support for outboard turning.

Switching to my standard 200 x 50mm blackwood blank for faceplate performance, the lathe performed without flaw. Changing speeds manually via the variable speed dial rather than pre-setting favourite speeds is easy; however the fine setting of the dial means that major increases in speed require multiple rotations of the dial.

No matter which speed you opt to work at, the lathe winds up quickly and smoothly and winds down within a matter of seconds when switched off, or if the emergency stop button is activated. A remote switch that can be clamped into place where needed adds to the safety features of this lathe, best used when the headstock is rotated to enable the turning of discs beyond the 18" capacity over the bed. According to the handbook the lathe’s capacity is 29"/736mm outboard (using optional outrigger accessory); however, this wasn’t available for this trial.

Overall, I found the finish of all machined surfaces to be excellent with all components sliding and locking with ease. Locking levers are large and easy to operate; however, the tailstock lever would be better relocated by 90° where tightening would not be hampered by the handwheel used to advance the quill. 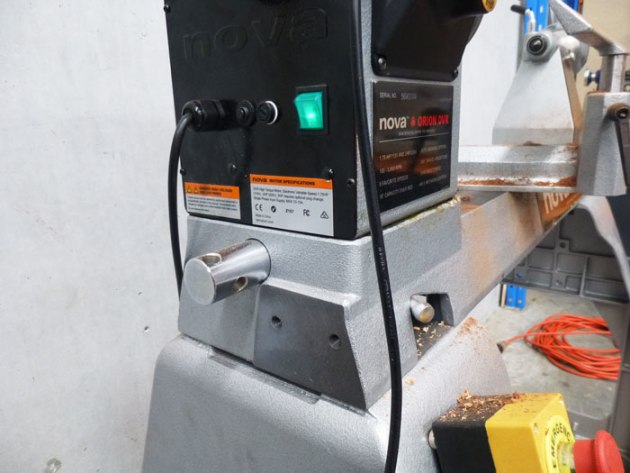 Left: Pre-set indents allow the headstock to be realigned easily to line up with the tailstock. The remote stop switch can be attached to any convenient location on the lathe.

Weighing in at 185kg, this lathe is going to stay put for your average turner’s requirements. And just in case you’re doing some oversized turning that may challenge the stability of the cast stand it has provision for an extra shelf or a sand box that can add even more ballast.

Sometimes little things capture your attention relating to more than just how a machine performs. The solid 150mm diameter faceplate threaded onto the spindle with ease, gliding along the thread with a sound that brought a smile to my face – it’s well engineered. And as for the USB port? It enables the uploading of ‘firmware’, so stay tuned as we find out more...

Andrew Potocnik is a wood artist and woodwork teacher who lives in Melbourne, www.andrewpotocnik.com