These 300mm planer/thicknessers are both made in the same factory. With a price difference of only $300 it quickly became evident that this was an exercise in identifying the differences between what are near-identical machines.

The heritage of these machines is obvious, with immediate comparisons to most other 300mm combinations already out there. Both have helical cutterheads with four rows each of 14 carbide insert cutters, which produced extremely clean finished surfaces on some tightly curled Queensland maple used for testing the machine. The resulting surface was also sufficiently flat to indicate that the tables were correctly aligned at the factory for both machines. 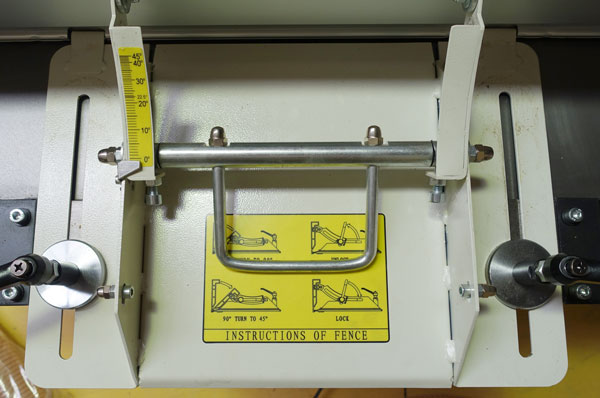 The cam-lock fence angle adjustment was a little awkward to operate.

Both cutterheads are 70mm in diameter and have the same mass, so the only difference in the geometry or physics of the cutting action of these tools is the rpms: the Woodfast turns at 5500rpm, the Rikon at 5000rpm. For this diameter cutterhead this difference is cosmetic only in my opinion.

A 3.3hp/15amp motor powers the Rikon while the Woodfast has a 3hp/15amp motor, so either would need a 15 amp circuit installed for home users. Both motors are sufficiently powerful for almost any task that this machine would be asked to perform. I find the surface grind on the tables of most comparable machines on the market to be somewhat disappointing, so I was pleasantly surprised to find a good quality grind on both machines, with the Rikon having a slight advantage. 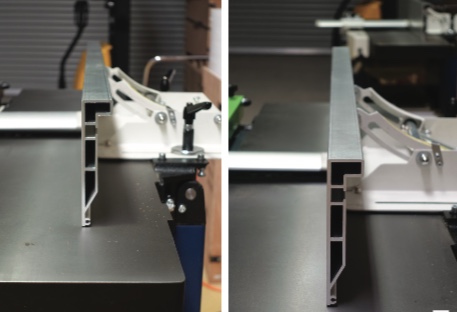 Cutterheads on the Rikon and Woodfast are the same configuration. The only difference is that the Rikon offers 5500rpm compared to 5000rpm on the Woodfast.

The jointer tables on both were a respectable 1409mm in length, the safety guards were both the Euro-style and both machines had an identically-sized aluminium extrusion fence that was nice and straight along its length. I found the camlocking system on the fence angle adjustment a little clumsy and it was difficult to lock the fence at the angle that I wanted, but thankfully both had adjustable positive stops to assist in this regard. With persistence one could get it right but I’d be reluctant to be changing it too often. 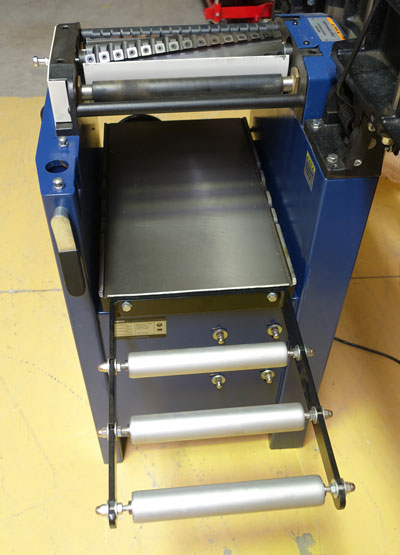 Point of difference: the Rikon has an accessory outfeed table fitted to the thicknessing table.

Infeed table depth adjustment was similar, as was the ability to flip the safety guard out of the way if required. I thought the stop/off switch of the Rikon was a little better – being Converting over to thicknessing mode was an identical process, although I found the Woodfast machine required significantly more effort to physically lift the tables. Once converted the machines have good safety features in that there is a locking toggle to prevent the tables from tilting back over without direct intervention, and once flipped over, the dust shroud also had a nice little spring-loaded pin to prevent it from being inadvertently flipped when not desired.

Feed speed is identical at a respectable 7m/min and the Woodfast has a slight advantage in maximum thicknessing width at 307mm compared to 305mm for the Rikon. Both have a thicknessing height range of 4–225mm.

The Rikon does have two distinct advantages in thicknessing mode. First, it has a counter-style readout to indicate the table height and it also has an accessory outfeed table fitted to the thicknessing table. The thicknessing table on both machines is locked with a rotating kip-lock handle, however the Rikon offered a more solid lock in this regard.

Lengths of sapele, some Tasmanian blackwood with a distinct change in grain direction along the length, as well as the figured Qld maple were used to test cut quality. The results from both machines were great, with the only tear-out happening right at the change of grain direction in the blackwood, which would have happened on this piece of wood with just about any other machine as well in my opinion.

There are now a good number of options in this class of machine for woodworkers to choose from, and these two are certainly well positioned to take on their competitors. Most home-based woodworkers would be well served by either of these machines. Whilst extremely similar in so many regards, I found the Rikon to be just that little bit better a machine, with the additional 0.3hp power, the height readout and the outfeed table on the thicknesser helping it to stand out for me.

Damion Fauser is a furniture designer/maker who lives in Brisbane who also teaches woodwork.