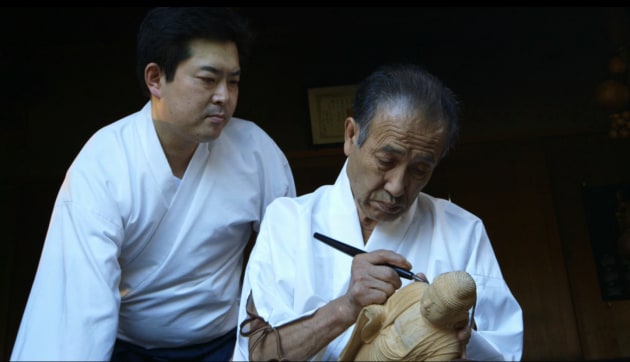 This is a film that has much to say on many levels. For anyone who practises a craft or an art, the depiction of dedication, perseverance and the challenges faced will resonate deeply.

Carving the Divine is a documentary shot over a six year period which looks at the traditions and practice of busshi, the Buddhist sculptors of Japan. Theirs is a strict discipline that entails the faithful and artistic reproduction of Buddhist deities. Each sculpture is painstakingly reproduced according to tradition. The finish is achieved with chisels only – sandpaper is never used. 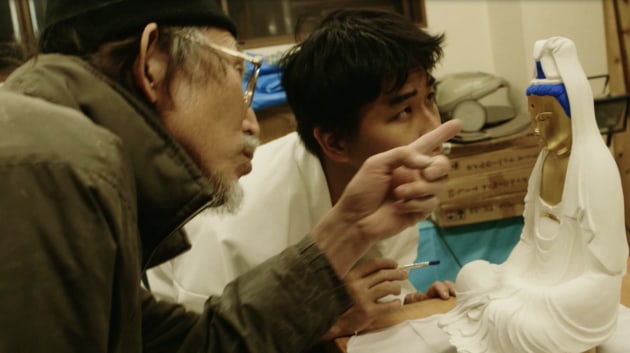 Through the eyes of the camera we observe the daily working lives and living conditions of the busshi who are members of Master Koun Seki’s guild. We see how skills are handed down from masters to apprentices.

Those who desire to be apprenticed are grilled as to their motivation, and the rigours of learning the craft to the required standard are explained with brutal clarity. Early on in the film an exchange takes place between Koun Seki and a potential new apprentice. 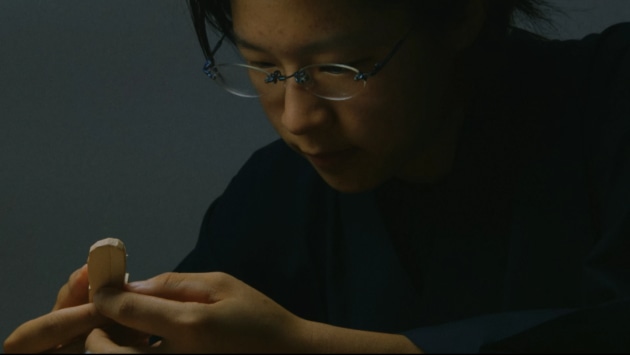 ‘You are wrong if you think we’re in a place of tranquility making sculptures – just because they’re called “Buddhist” sculptures,’ he says. ‘Ours is a world of craftsmen. We won’t calmly teach you...we’ll yell at you if you do something wrong... And ours is a world of learning by stealing. No one will “teach” you.’

The method of passing on skills may seem brutal: ‘This is almost like a hero’s journey – young apprentices learn to restrain their egos, build character and grow into mature human beings1’, says Yujiro Seki who single-handedley shot, edited, produced and now shows the documentary at film festivals and screenings the world over. 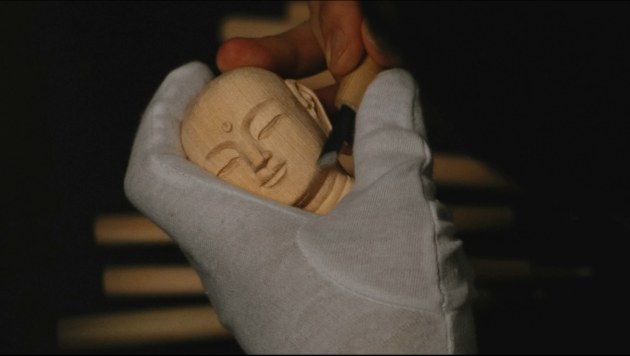 Details of work in progress

‘At first, apprentices may have a hard time understanding this difficult training and the relationship with their master’, he says, ‘but as they continue their training and become bread-earning busshi, they realise the love and compassion of the master and respect and appreciate him/her for the rest of their lives.1’

Through years of exacting practice, busshi sculptors develop their craft through an attitude of humility and the dedication required to faithfully reproduce traditional representations of the Buddha and bodhisattvas. ‘These sculptures created by busshi are not mere crafts’, says Yujiro. ‘They have a deep spiritual connection to the collective Japanese psyche.2’ 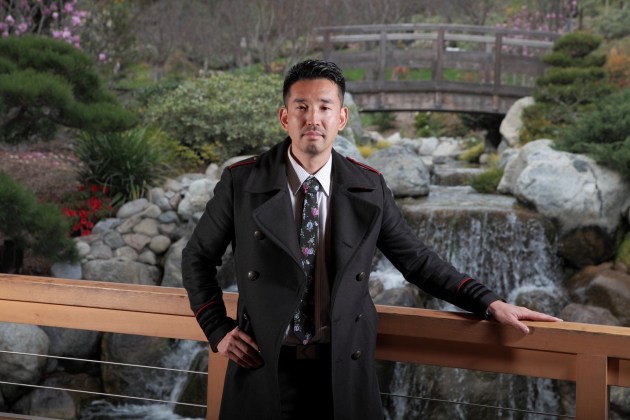 As the son of a Japanese Buddhist altar maker, Yujiro’s connection is personal and deeply felt. ‘Throughout my childhood, I was surrounded by not only Buddhist altars but also other Buddhist objects, including butsuzo (Japanese Buddhist sculptures). My father took me on trips to see his clients at Buddhist temples all the time. I did not think anything about my environment; it was just a family business and all I knew.1’ 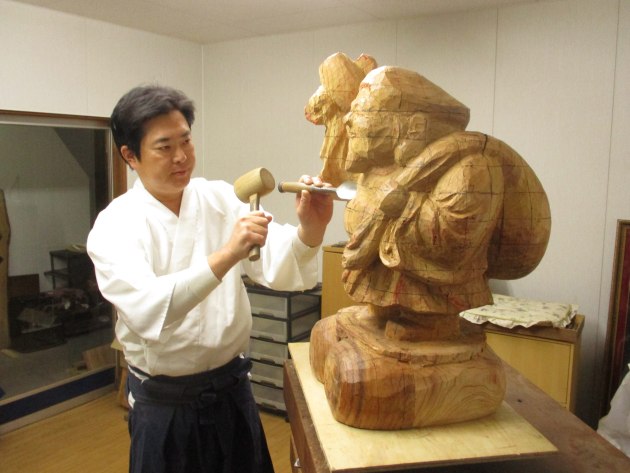 Yujiro Seki discovered his passion for filmmaking in high school and went on to study film in the USA. ‘As naive as it sounds, my dream had always been to make a movie that inspires people. After obtaining permanent residency in the US, I decided to leave the job in order to finally be true to myself. I’d slowly realised the environment in which I grew up was uniquely profound. In that realisation I found my subject: the Buddhist sculptors of Japan.1’ 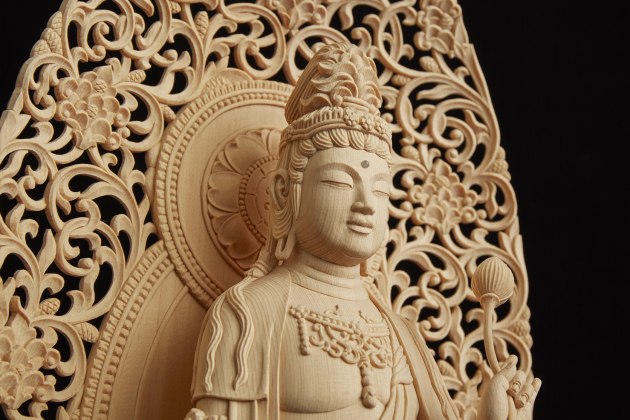 Japanese busshi have a 1400 year lineage and yet their traditions are largely unknown in the Western world. Before the eighth century they worked in government sponsored workshops but now continue to work independently creating work for temples or private clients. The rewards of their ascetic lifestyle are being part of a lineage that seeks to leave great works behind and the joy that that can bring is revealed in this documentary as well. 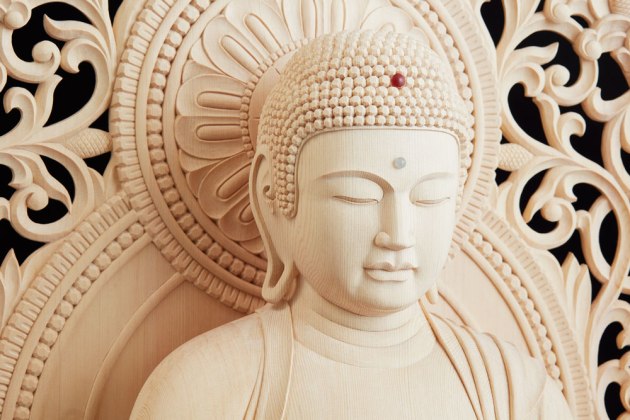 Importantly the film shows Grand Master Kourin Saito (1937–2016) at work, and also at an annual dinner where he appraises the work of apprentices. His dedication and love for the art which he continued to practise into his 80s is apparent.

Making the film was not without hardship. ‘It was a long, painful, heartbreaking journey for me’, says Yujiro. ‘It took seven years to reach the point where I am finally proud to present this documentary to the world. As a Japanese person, I felt that I had a responsibility to tell an authentic story of Japan, especially if the subject is about 1400 years of tradition. This is the precise reason why I took my time to complete Carving the Divine. I captured a tremendous amount of footage and organising it was a pure nightmare. But, as I patiently made revision after revision, I felt great for so many years of work coming together.’

Carving the Divine depicts the world of a group of craftspeople who in many ways have to learn and adopt the attitudes they depict in order to faithfully portray them.

For information on screenings see www.carvingthedivine.com