Morris Lake, 74, welcoming me into his Queenslander style house, is not the person you would think most likely to wage war on illegal logging practices…but that is in reality what he is doing.
I have to confess I am in awe of Morris. In the course of his 37 years as a technical officer with the Department of Primary Industry, Morris has put out over 450 books and publications. We’re not talking literary fluff here, these are works based on numerous research projects, statistics and a lot of trekking around the back blocks of Queensland visiting beef, dairy, pig and bee farmers, for example. On top of that he wrote for and edited World of Wood, journal of the International Wood Collectors’ Society (IWCS) for another seven years. ‘For my whole working life’, says Morris, ‘my aim has always been to take knowledge and make it available to other people’.
Morris reels off statistics at a dizzying rate that just keeps going. Compared to other continents, Australia has a staggering number of native tree species. A whopping 5300 in fact. To put that in perspective, the UK has 47 and Western Europe has 67. (For the record, Morris listed 4500 Australian species in Australian trees and woody shrubs – common, local and scientific names, in 20061). Of our 5300 native species, 1200 may be classified as rainforest. Morris’s newly published book, Australian Rainforest Species2, lists 141 of the most significant. What makes this book special for woodworkers is that, unlike botanical publications, it also describes their wood.
It’s no surprise that wood is everywhere in his house, nor is it that Morris uses mostly scientific names as he describes some of its contents. ‘To me, every piece of wood that I pick up tells its own story about its genetics, how it grows and where it evolved from’, he says. The floor in his house is Flindersia australis (crow’s ash), that he got from Kalbar some 20 years ago. There’s a table made from Telopea (NSW waratah), and another from Huon pine (Lagarostrobos franklinii) with King Billy (Athrotaxis selaginoides) and Californian redwood (Sequoia sempervirens) inlay. Morris made both by the way, and all the Quercus (oak) chairs that sit around them. 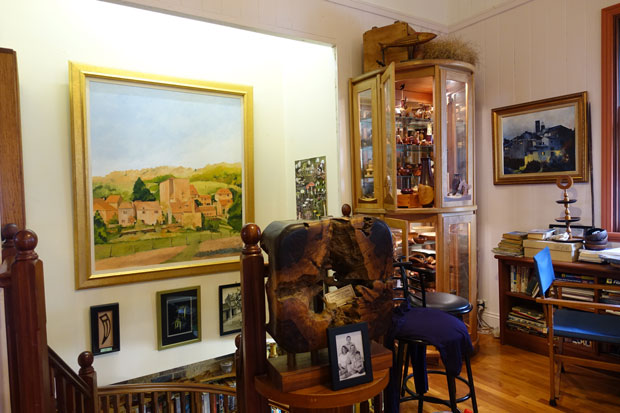 There’s a small drawer chest of native Allocasuarina torulosa (forest sheoak), ‘really hard to cut across the grain’, and sculptures shaped from Callitris and a stump of bonaree (Heterodendrum oleifoluim). Quarters of the latter were reversed and joined, mirroring the way the roots of this tree grow in such a way as to funnel precious water back into its entire organism.
There are display cabinets made by Morris, and others by local wood artisan Jada Bonaventura filled with collected turnings, carvings and boxes made from many different species. But wait there’s more. Throughout the house are numerous landscapes and paintings in oil, because it transpires that Morris is also a painter, and in fact studied art for a couple of years at Armidale University in the 60s. Is there nothing this man can’t do?
Descending a beautiful custom made timber stairwell past the expected library of books takes the visitor into Morris’s real world of wood. Of his 3,000 or so wood samples, more than half are catalogued and filed in purpose-built cabinets made from mulga (Acacia aneura) – by Morris of course. (The next set of drawers will be made from beefwood (Bischofia javanica) by the way).
Through the door and into a wood workshop. Bandsaw, drill, tablesaw, lathe, linisher, drop saw, walls covered in tools, jars, bits and bobs make this a real ‘shed’ – and the laundry doesn’t take up too much room. 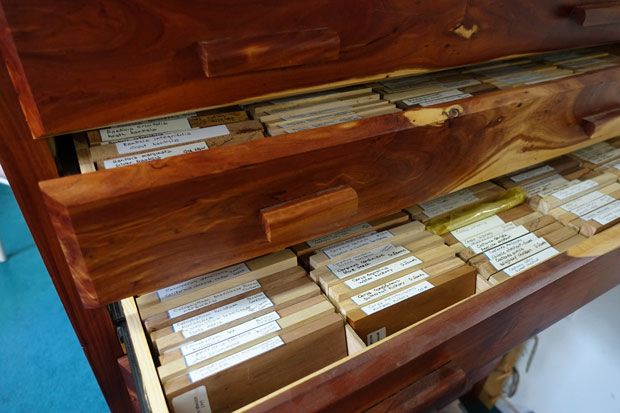 Meetings with other members of the International Wood Collectors Society always involve swapping and sharing samples of species local to members. For the collector these will be processed into standard sample sizes. The ‘leftovers’ can become boxes with feature lids that Morris likes to give away.
Another book is on the way, this one will cover forest species and may take up to two years to complete but in the meantime there are important projects to launch. It’s obvious that Morris is passionate about trees and wood. However trees also have a much more profound importance that he points out in his book and in other writings. ‘We have a direct evolutionary relationship with trees’, he says. ‘Plants, through their chlorophyll, produce almost all of the oxygen we breathe. As well, trees suck up huge quantities of rainwater that would otherwise flow back to the sea. In a single day a large rainforest tree can pump over 1,000 litres of water into the atmosphere.’
Rainforests represent a ‘cradle of biodiversity’, essential for sustainability of all forms of life. Less than 0.05% of Australia’s land mass is now covered by rainforest – once upon a time that figure was 60%. However of greatest concern are current levels of deforestation that are occurring throughout the world.
In a paper presented to the IWCS and to the International Wood Anatomists Society in July, Morris wrote: ‘If I am to respect the advice from my peers at the Australian National University and the University of Papua New Guinea – that with the massive escalation, of mostly illegally harvested rainforest hardwoods, throughout most of the tropical regions of SE Asia, and now the recent re-escalation in south America, then more than 80% of the world’s rainforests will be gone by 2025 at the latest.’ The impact of this is manifold, reduced biodiversity and rainfall are at the top of the list however.
One great factor that allows the demand for illegally harvested logs to exist, is the fact that it is so hard to identify them and the resultant supplying of them under other names obfuscates this even more. We need to be able to ‘actively control quotas and species in order to control sustainable harvesting of rainforest hardwoods’, Morris said.
At the same IWCS meeting Morris launched a project which aims to facilitate the creation of an international online species identification database enabled by the streamlined process of preparing endgrain samples for macro photography developed by another IWCS member, Jean-Claude Cerre. This would draw on existing computer pattern recognition technology extended with algorithms that would allow for variability. With Cerre’s system, one technician can process up to 30 specimens a day, making such a project feasible. Existing techniques are far more time-consuming.
I asked Morris what the average person can do to at least not contribute to the world’s deforestation? Buying wood certified as sustainably harvested should be the answer, however it’s not that simple as Morris feels that surety of imported and even local species is not always possible. Part of the answer is for people (more so woodworkers) to learn more about wood species and how to identify them, while endeavouring to seek out reliable sources. Sharing knowledge is always the first step.
Words and photos: Linda Nathan, Wood Review editor
Morris Lake's book is available from www.carbatec.com.au
To learn about the International Wood Collectors Society visit: www.woodcollectors.org
1. Lake M J (2006) Australian trees and shrubs-common and scientific names and toxic properties. Second Edition 2006. International Wood Collectors Society. ISSN 1 876601 04 3.
2. Lake M J (2015) Australian Rainforest Woods, Characteristics, Uses and Identification. CSIRO Publishing, Australia. ISBN 978148631799.
comments powered by Disqus