Who was the Ipswich Woodcarver?

Above: A picture frame by Harley with themes of motherhood.

There is a sense of kinship among woodworkers that is a mix of respect for hard-won skills and an understanding that it isn’t necessarily an easy life. For thirty years I have been writing about such people because, as a woodworker myself, I wonder why they have embraced this sometimes unpredictable life. I recently moved to the Queensland city of Ipswich and there I heard a compelling story, rich in mystery and local history, and I soon realised that I wanted more woodworkers to hear it.

One of the first places I visited was the Ipswich Art Gallery and as soon as I entered my attention was caught by a glass- fronted display case containing carved wooden boxes, picture frames and architectural features. My first impression was that it was very naïve work, but I was fascinated by the abundant detail and its Australian themes. This work was originally displayed in a 2009 exhibition titled Peter Harley: An Ipswich Woodcarver, and, to my surprise, I learned that Harley had spent most of his life in the Ipswich Insane Asylum.

I wanted to know more, so I met with Michael Beckmann, the Gallery Director, and Alan Rix, retired Pro-Vice- Chancellor of the University of Queensland Ipswich campus, which for a period occupied the beautiful buildings and grounds of the former Ipswich Asylum.

Michael was quick to inform me that, ‘The credit for uncovering Harley’s story goes to Alan. I am embarrassed to admit that once, when I was having a bad day, I had a phone call from an elderly citizen. She asked if I would like a carved picture frame by a “patient of the insane asylum” for the collection. I politely said, “No, thank you”. She then said, “I’ll contact them at the university and see if they want it there”. 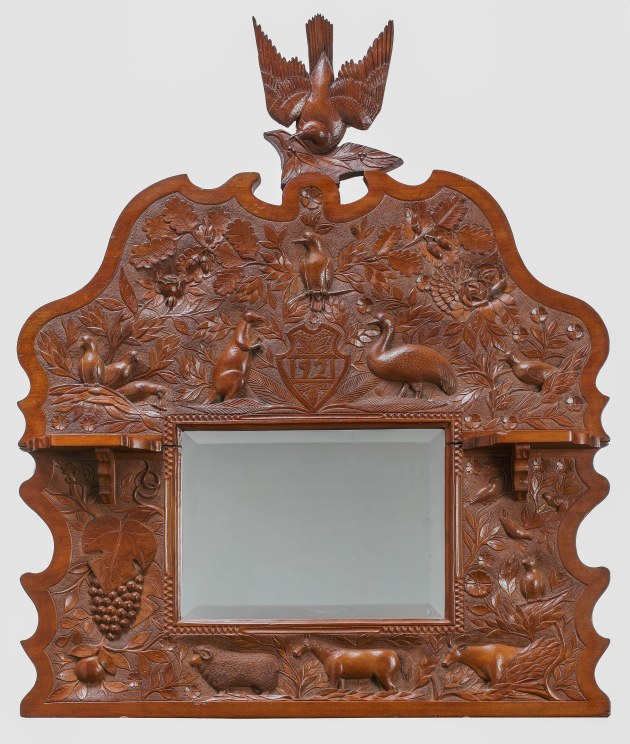 An overmantle from 1921. Post World War I, the dove of peace sits highest.

‘I remember thinking it was an odd thing to say, but later Alan told me that a lovely picture frame had come his way and that it had a visual connection with a carved honour board that was still at the campus, so he started looking into it. I was embarrassed because I had already heard of this famed, but anonymous, Ipswich woodcarver. I could never have imagined he had been a patient at the asylum.’

Alan explained that the asylum closed in 1998 and became a university campus. ‘Because the whole site is a heritage location, they wanted to honour its important history.

A 1920 overmantle with pastoral themes.

A lot of things made by patients were left there and among those was the honour board carved by Peter Harley. Apparently it was made of silky oak from a tree that was grown on the asylum grounds.’

Michael explained that in the late 1970s and early 1980s a number of antique dealers in Brisbane began selling distinctive woodcarvings that they purchased from old houses in Ipswich. Although unsigned, they believed they were made by one person and they called them ‘the work of the Ipswich woodcarver’. Michael explains how this was possible: ‘When you see a work by Harley it’s like recognising an old friend. There are distinct features: certain motifs, the shape of flowers, and how animals are carved’. Alan agrees: ‘Yes, his work is distinctive. He had a naïve focus on plants and animals, and he was particularly fond of roses. His work represents a style of folk art that we don’t have much of in Australia’.

Alan has uncovered intriguing glimpses of Harley’s life: ‘It’s not easy to get information on mental health patients, but what we do have is a fascinating story of a Scottish immigrant who finds himself locked up in an asylum for most of his
life. He lived in an institution that had a very bad reputation because of the poor conditions and the primitive treatments, but he managed to achieve many things’. 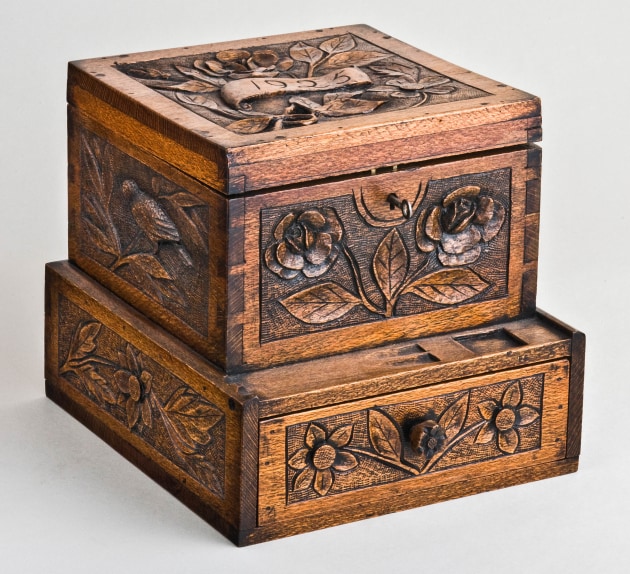 Harley was born in Scotland in 1873 and died in Ipswich in 1941. He was originally taken into custody in 1907 as a ‘lunatic patient’ and admitted to the Ipswich asylum in 1908. It is not recorded why Harley was first detained and apparently he was unable to explain his circumstances, but his belongings gave intriguing glimpses into his life. He owned a camera, books of poems by Byron and a copy of Paradise Lost, photos of Pompeii, bank books that recorded considerable funds, and valuable mining shares from West Australia. It seems he was well educated and quite well off, but all of his assets were later sold, supposedly to cover the costs of his incarceration.

The first mention in the records of Harley’s carving is in 1916: ‘...spends his time in carving and has carved the honour board for the institution. He has a little box where he keeps all his tools which he locks himself’. The next mention is in 1927: ‘...well known for his woodcarving’. Alan explains that the asylum tried to encourage rehabilitation, and that woodcarving was a popular hobby in those years, so that may have explained how Harley started carving. Also, the asylum had extensive views of the gardens and the asylum’s farm, so that may have influenced Harley’s pastoral scenes.

With so little information available, Michael has tried to fill some of the gaps: ‘They may have had children’s books with simple illustrations that were the source imagery for subjects like birds and kangaroos. But it seems to me that he didn’t have access to carving manuals because you don’t see the symmetrical scrolling and floral work that was popular then. I don’t think Harley came here with a background in carving, but it may have been introduced to him as a therapy. 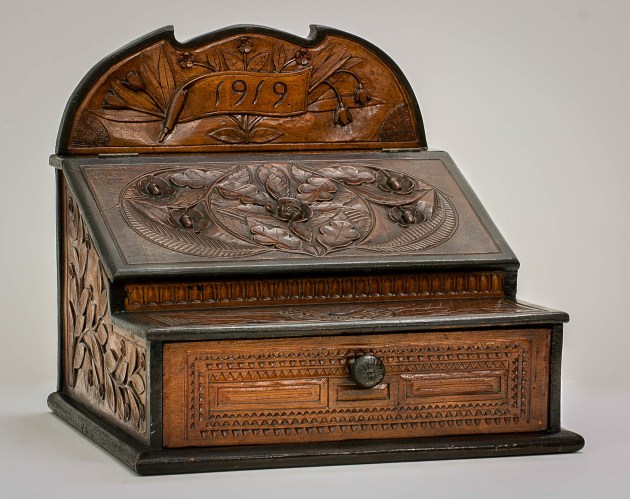 A stationery box. Harley probably did not construct the boxes, but carved them extensively.

‘When we put together the exhibition you could make sense of it – his simple early efforts and him struggling to do three-dimensional pieces by carving them separately, and then adding them to the work. Then later we see the competent low-relief carving on every side of a box. Alan is right, they’re typical of what Americans would call a “folk artist”. His motifs are so humble and personal, but there is also a potential connection with the First World War that goes beyond the honour board. A number of boxes are dated within the span of the war and the names on these boxes were invariably of women. Possibly they were given to a widow or a daughter of a fallen soldier to contain possessions that were returned to them.’

Alan mentions intriguing hints of Harley’s life before he was confined. ‘Because he came from Scotland there are a lot of Scottish elements, such as thistles. There’s an interesting feature on one of his mirrors – an open-topped car with two children in it, and the word “dreadnought” carved into it. I’m not sure what it all means, but it probably goes back to his childhood’.

Michael further reflects on Harley’s life as a carver: ‘I think that if a person has the disposition and opportunity to focus, it is possible for them to create an astonishing body of work.

He probably made his own decision to pursue this and, while his work isn’t remarkable, it still has a notable presence. I am sure he derived a sense of pride and perhaps even of his missing identity. When you are assessing an artist’s work, it is as much about the distance they have travelled as an individual as it is about the final accomplishments’.

With so little to go on, it is risky to assume too much about Harley’s life, but there are hints of what might have been in his mind. In one of Harley’s picture frames you can see a mare with her foal, a mother and child, and two other women. Was it in response to a commission, or were these echoes of his own yearnings? Also, those few words about the little tool box which he ‘locked himself’, suggest so much. This indicates that Harley was given the liberty to do this, so he must have been well trusted to be left in charge of sharp tools, and they were obviously of great value to him. We know his work was appreciated by the asylum staff, because some of their descendants still own significant pieces.

Whether Harley personally benefitted from the sale of his work is unknown, but we do know that he had a long and prolific life as a carver. Looking at the peaceful scenes that he created, it seems it might have brought him some peace. We owe a lot to the team who brought his work to the public eye again and Michael is still seeking work by the Ipswich Woodcarver, while Alan is trying to find Harley’s unmarked grave in Ipswich General Cemetery. Peter Harley’s work is now part of the public record and he is not forgotten.