Tiersmen to Linenfold was an exhibition of 14 pieces of furniture designed by Khai Liew that opened at Adelaide’s Jam Factory in June 2007. The enigmatic title is the artist’s own in-brief summary of the influences at play in his work. During the period of Adelaide’s settlement by Europeans the surrounding hills were referred to as ‘tiers’ and the men who cut the stringybark eucalypts that grew there for constructing their homes and furniture were called tiersmen. ‘Linenfold’ is a type of carved wood panelling that dates back to the 15th century and can be found in churches and sophisticated interiors.

‘Both terms relate to work I was doing prior to becoming a designer’, said Khai at his exhibition floor talk. ‘Dealing with furniture made by early settlers was in a roundabout way my introduction to the world of design.’ On a personal level, he said, ‘this mirrors my own change from working with primitive colonial furniture to working towards something more considered and with greater emotional input’.

Visually the works presented played with the idea of ‘folding’ and layering panels and lines to create striking profiles and shadow lines. Folding paper origami-style is a technique that Khai uses to create his designs, another twist on the European linenfold references in his work.

Tracing the influences of his furniture designs will lead back and forth in time, and to and from Egypt, Asia, Scandinavia and Europe. It’s a complicated lineage which somehow melds fluidly into the forms of Khai Liew’s furniture much as the various strands of the artist’s own life come together. 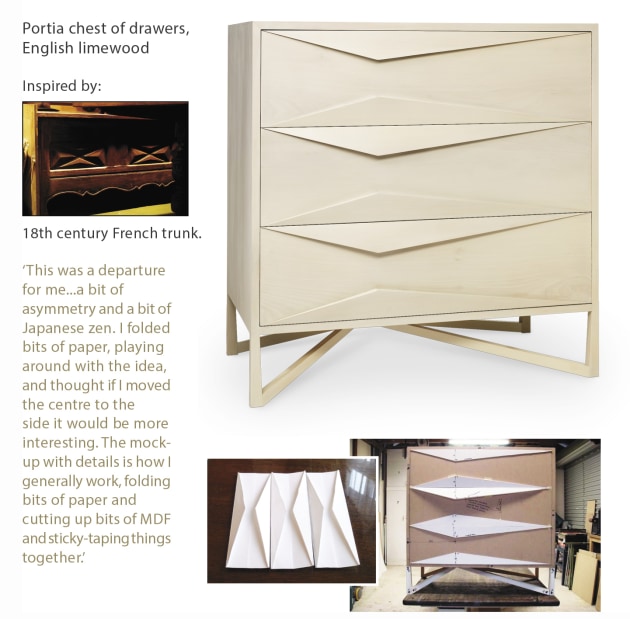 In 1969 Khai was 16 when he and his family left Malaysia in the wake of anti-Chinese riots. Only five years later he opened Augusta Antiques in Norwood to sell the early Australian furniture that he collected from farms and country towns and restored. In the 90s the renamed Khai Liew Design displayed an eclectic but harmonious mix of early Australian and imported mid-20th century Danish furniture.

A respected conservator and specialist dealer in Australian colonial furniture for over 20 years, Khai Liew’s expertise now primarily rests on the design skills he applies to public and private commissions for free standing and display furniture. His furniture designs are made singly or in limited edition batches by highly skilled makers.

As the creator of works in an exhibition titled Long Weekend (also held at the Jam Factory) in 2000, Khai Liew was hailed as an emerging designer of note. Public acclaim followed in the form of acquisition of his Wanda bench by the Art Gallery of South Australia (AGSA). In 2006 Khai exhibited in Collect 2006 at London’s Victoria & Albert Museum.

Tiersmen to Linenfold was Khai’s sixth exhibition and represented the work of an established artist. The designs were conceived during a three week period of self-imposed working exile in Paris and works from the exhibition are now also part of public collections. The Spoehr chair was purchased by the AGSA while the Linenfold cabinet is now part of Sydney’s Powerhouse Museum collection.

Although his influences are diverse, Khai can relate the conception of many of his pieces to specific visual catalysts; a piece (or a piece of a piece) of furniture, or some other image which inspired him. 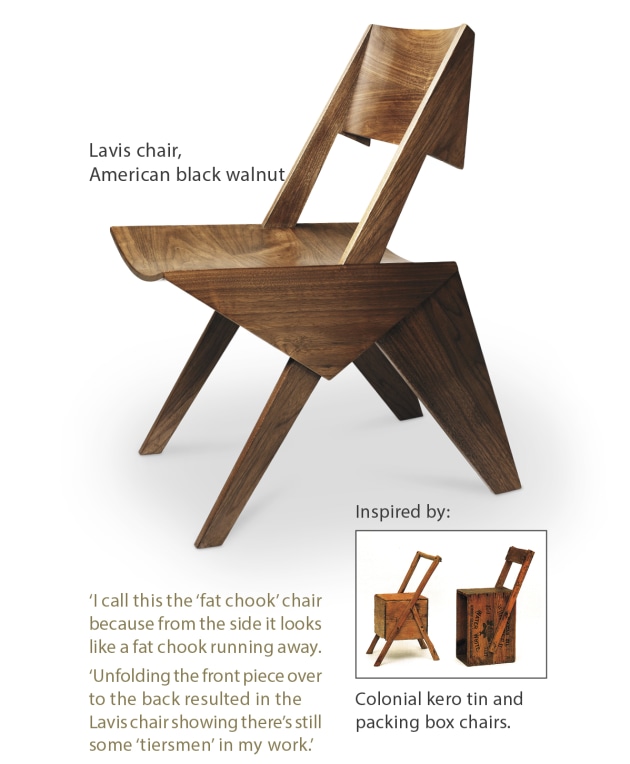 References to improvised colonial furniture are apparent in the Lavis chair, which derives from kerosene tin and packing box ‘make-do’ chairs that were part of the McAlpine Collection. The Dakota bench is a fusion of ancient Egyptian and 19th century English furniture forms while the Linenfold sideboard takes inspiration from panels on a Cambridge door and also a Parisian Arts and Crafts stool created in the 1930s.

From the draped effect of a kimono to the tranquility encapsulated in some small Shinto figure carvings, Khai draws on oriental attitudes and sensibilities as well as his own hereditary connection to impart the sort of zen energy which repeated motifs and rectilinear structures can generate.

Refining the lines of a design, balancing its verticals and horizontals and the spaces between them govern the ‘rhythm and harmony of the actual piece’ (Long Weekend exhibition catalogue essay by Khai Liew, 2000). There can be no rhythm without repetition and cabinets like Portia and Linenfold use boldly carved and constructed panels that serve as drawer and door pulls.

In Portia the drawer front motifs are placed off-centre to create an asymmetry that is mirrored in the cabinet’s stand. Gillian uses smaller but more numerous components on its decorative door panels but retains their symmetry. The motifs for these panels were diversely inspired but all developed in paper-folding experiments. 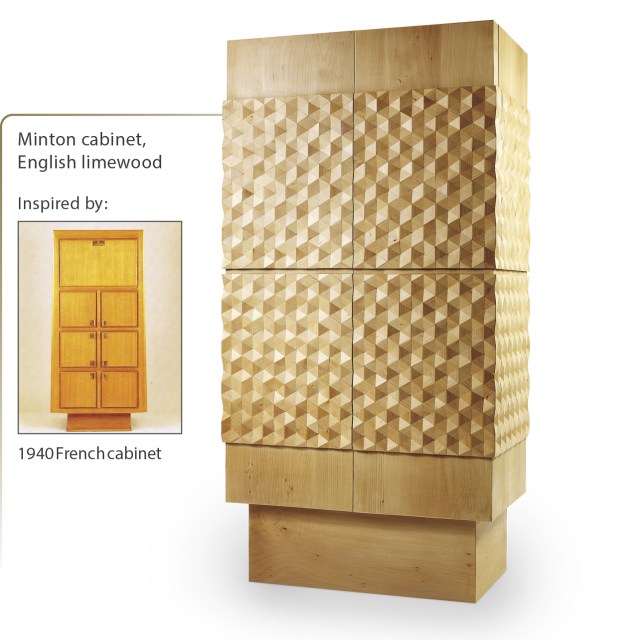 The repetition of a basic shape multiplies exponentially in Khai’s Minton cabinet, which he explains is ‘essentially a 1940s French cabinet form with a Japanese coat’. Hexagons pattern the walls in the V & A Museum’s Minton room and Khai paid for that piece of inspiration by having to personally (with the help of assistant Martin Harvey) cut the 3,600 angled pieces of limewood required. ‘It nearly drove me insane’, Khai said.

The chairs in the exhibition explore even more carefully considered lines and joint structures while keeping good regard for function. The Spoehr and Brooks chairs have a pared back refinement at odds with the complex angles and tapers apparent on sustained examination, but in harmony with the Chinese and Wegner chairs they reference. 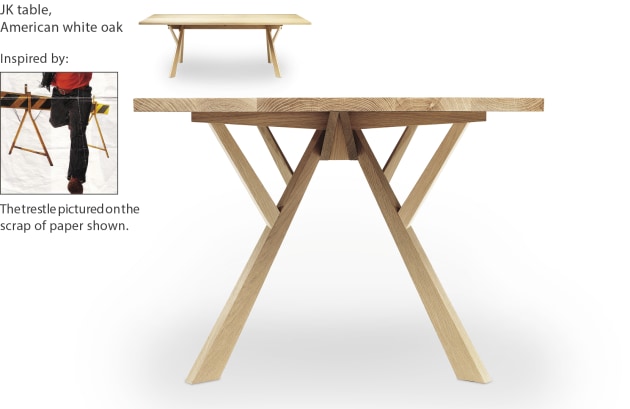 The Sama and JK tables play with the idea of angled support structures which reveal intriguingly different end and face-on views. In typical Khai fashion inspiration for the JK table is both ancient and as recent as an advertising pamphlet: a 5th century BC table and a scrap of paper showing a sawhorse and a truncated fashion model.

Finely grained limewood, further detexturised by a limed finish, was used for several of the pieces. Pale, papery tones highlight cabinet structures and especially the shadow lines of the decorative motifs. The ‘folded’ panel expanses of the Dakota and Nichole bench are accentuated with the use of birch ‘eco-ply’. Wood grain and colour are however utilised in the Brooks, Spoehr and Harvey chairs, along with the tables in the exhibition.

Australian timber species featured in Khai’s earlier exhibition works but aren’t used here. ‘I did not consciously set out to not use Australian timbers. Limewood was extremely useful in evoking the feeling of paper because it takes to the finish really well; plus, the timberyard down the road had several cubic metres that had been lying around for over ten years.’ Other wood species, Khai said, were selected because they were plantation grown.

The pieces in Tiersmen to Linenfold were named after work-mates and friends and are yet another way that Khai Liew publicly acknowledges the manifold sources of inspiration which inform his designs.

Learn more about Khai Liew and his recent work at via www.khailiew.com