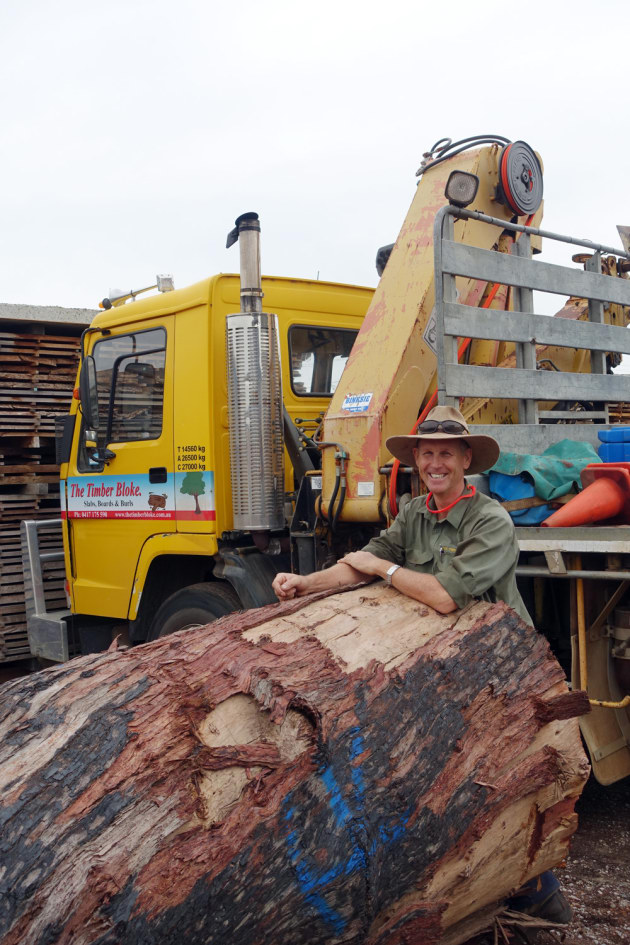 Derek Doak stands with salvaged logs in front of the ‘mighty yellow hornet’. The crane truck opened up possibilities.

Taking a tour of Derek Doak’s all-in-one sawmilling, kiln drying and retail timber yard pretty much means being personally introduced to every board and slab in the place that he has lovingly sawn, stickered and stacked.

And it’s a big family to meet. Thick, thin, long and longer, there’s jarrah, marri and karri; sheoak, tingle and tuart; spotted, sugar and salmon gum; blackbutt, wandoo, woody pear and more. End-to-end stacks line the length of his long yard and elsewhere outside. Boards are stacked high inside big tall sheds, and totally pack out the dehumidifying kiln near the front. And there’s a retail shop with select shorts and other ‘bits and bobs’ – to use one of Derek’s frequently uttered expressions. 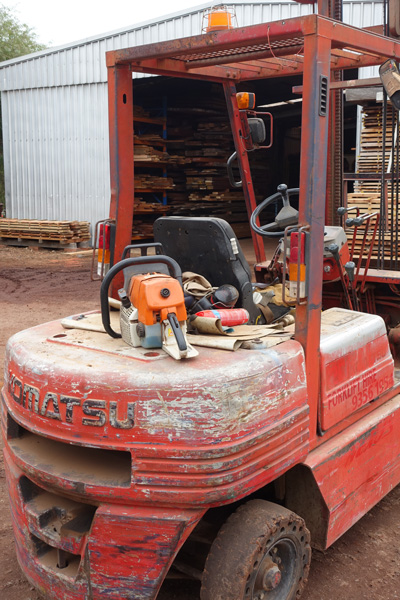 Who works here? Just Derek, for around 10 or 12 hours a day, ‘but not on weekends’. Actually he is not alone – his helpers are the ‘mighty yellow hornet’ and the ‘red rocket’, on which Derek is scooting around on when I arrive. The red rocket (forklift) is Derek’s onsite set of wheels for stacking and moving boards. The yellow hornet (crane truck) was a purchase that opened the way to getting bigger and better logs (up to 20 tonnes) back to the mill. 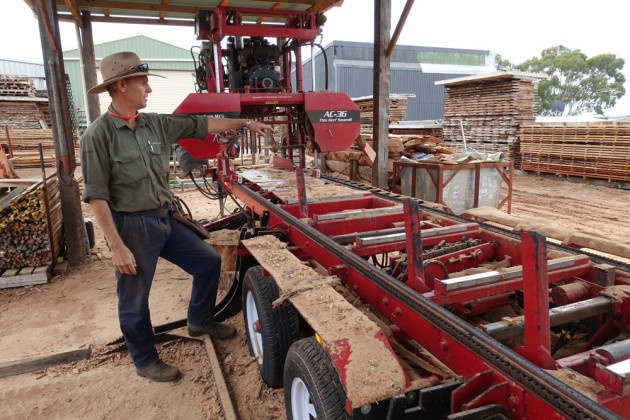 The Cook’s bandsaw mill is now the favourite machine.

‘You just missed me sawing that pile of marri’, said Derek standing near the red Cook’s bandsaw mill, bought around 18 months ago and where Derek gets to do what he loves. Good sawmillers know how to get the best result from each individual log. The intuition that comes from experience and observation must be the key. Saving logs that would otherwise go in the chipper and milling them to reveal their inner beauty is a big part of why Derek likes what he does. 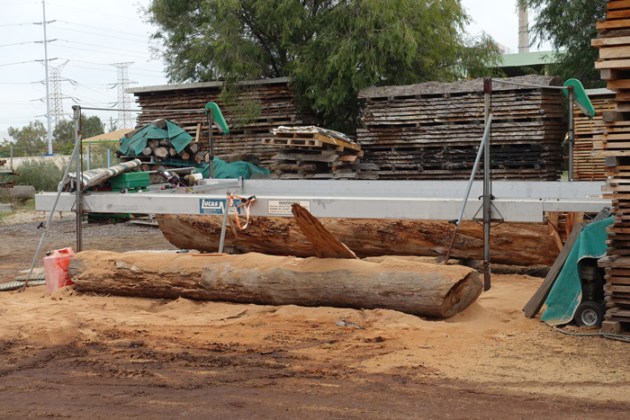 The Lucas Mill and Alaskan chainsaw mill are still in use.

Before he had the bandsaw mill, he relied solely on the Lucas Mill and the Alaskan chainsaw mill that are still in use. Multi-tasking will go up a notch when he’s figured out how to ‘automate’ the Lucas mill so it can cut while he’s also running the bandsaw mill. Growing up on a farm teaches you how fix things and improvise, and when you work on your own you need strategies.

Apart from logs bought at public auction Derek mills mainly urban and farm salvaged wood. ‘Everything you see here has been saved from being mulched or burnt and to me that makes a good use of that resource, because most of that would have gotten chipped and that’s sacrilege’, he said. ‘Sometimes, I’ll get a call from someone getting rid of a tree from their backyard and I’ll say “Of course it’ll put leaves in the gutter – but look at it, it’s beautiful!” I hate cutting down trees.’ 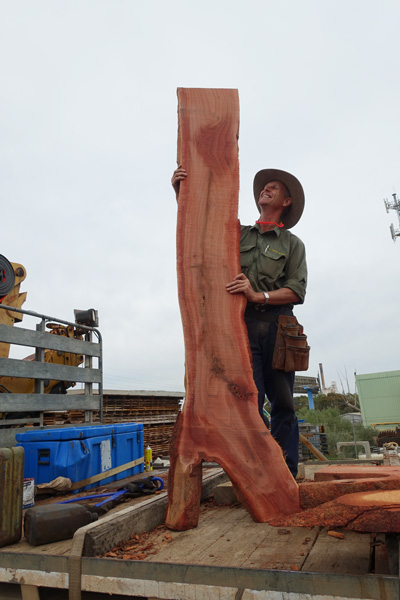 Bigger mills can standardise but because Derek is milling a constantly varying and diverse range of species, the piles of wood vary in length and thickness, but not in neatness. ‘When I see a nice stack and it’s all straight and square I look at it and think someone’s going to make something really nice out of it.’

Thinner boards go down the bottom because there’s less airflow and they will dry faster in that position than thicker sections. Each stack ideally comprises two halves of boards separated by stripping sticks and ‘gluts’. Concrete slabs (made onsite) are placed on top to weigh things down. When it’s time to kiln the wood, it’s just two lifts with the red rocket to move it. 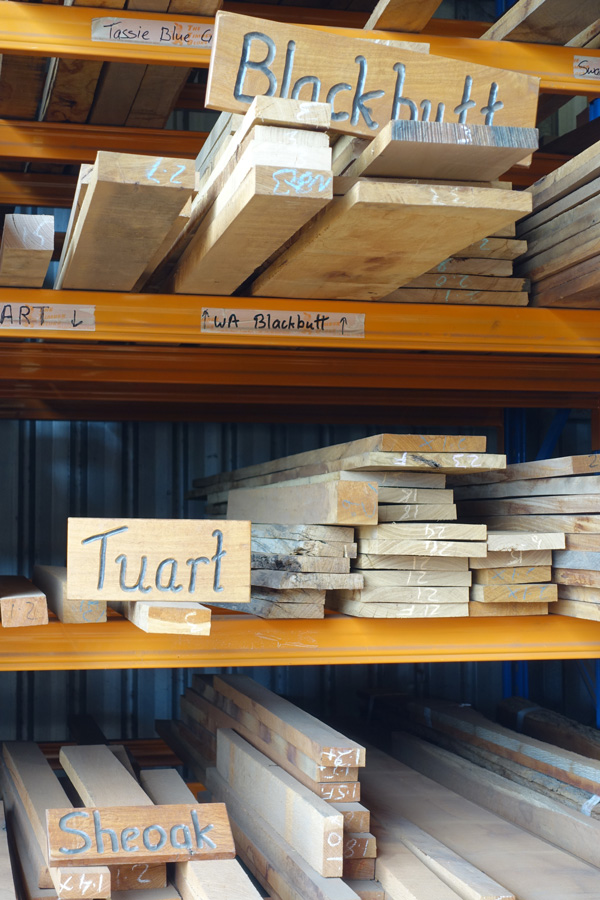 Everything has its place. West Australian natives and other salvaged boards are stacked in order.

Once the moisture content is down to 10% the boards come out of the kiln and go into main shed. Splits and cracks are docked and slabs are machined on the Wood Wizz. ‘I take the slabs outside, wet them to show the colour, write their specs and take photos. Everything is catalogued and goes on a database so clients can find what they want online’, said Derek.

Twenty five years ago Derek was a different bloke, even though he’s been milling his own timber since then. He still does some commercial helicopter work, mainly now in the summer for Channel 7 or Surf Life Saving. For 15 years he flew for mining companies and did aerial photography, joy rides and sling work as well as training others. A mate dubbed him ‘The Helicopter Bloke’, but Derek switched it later to The Timber Bloke because now the milling is ‘all I want to do’. 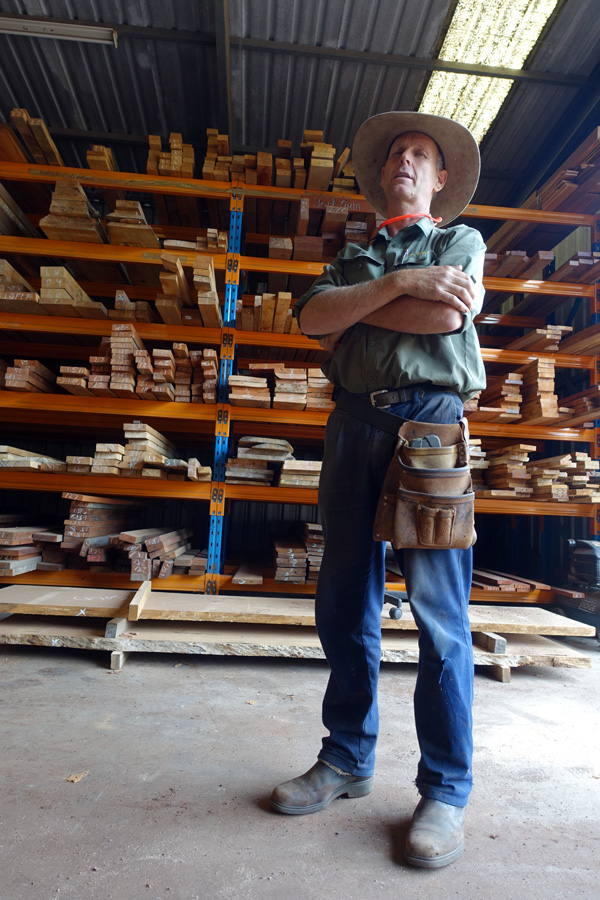 ‘You’re only renting this bit of wood... mistreat it and I’ll come and get it back off you!’

What is it he likes so much about the job? ‘I like it because there’s much less regulation and hassle involved than flying. But the main thing is I can get a log and look at it and say “gee I wonder what’s in it”. Before I start I’m already working out what I think it’s going to get used for and then I’ll saw it accordingly. If it’s a wide tree and I think its got good grain I’ll almost certainly slab it, unless it’s too short.’

Derek sells and ships his wood all over Australia and even though you might have paid for it the connection doesn’t end there. ‘I encourage people to send photos when they’ve make things. I often say to them, you’re not actually buying this bit of wood off me, you’re only renting it, because if you mistreat it I’ll come and get it back off you. I like wood and I love trees.’

Derek Doak trades as The Timber Bloke from Naval Base in West Australia. Contact him via www.thetimberbloke.com.au