Scale prototypes were initially made to test proof of concept. Photo: Aimee Catt

A five and a half metre tall timber tree growing inside a public building was the vision of the architects for the new Ipswich City Council Community Library in Rosewood. Having recently been introduced to the possibilities of CNC routing by a guru in the hills of picturesque Maleny in the Sunshine Coast hinterland, designer and maker Paul Mitchell didn’t want to pass up the opportunity to work on such a unique sculptural project.

‘I had been using CNC technology to streamline some of the production processes for my custom furniture work when this project came along,’ said Paul. ‘I was captivated by the organic shapes and the scale of the tree and knew it was something that could take my making skills to the next level.’

Growing up Paul was fond of drawing and painting, and as a qualified carpenter who worked on everything from Queenslanders to military bases, the jobs he enjoyed most were those where he was afforded the time to get things done right and work
on the finer architectural details to a standard that he was proud of. Creative architectural details captured his imagination and led to an ongoing appreciation of furniture, architecture and design.

Looking for a change of scenery, Paul discovered a furniture design course on offer at the University of Tasmania and enrolled without a second thought. He and his girlfriend loved the adventure of the move to Launceston and took advantage of the great outdoors, bushwalking, camping, motorbike riding and relished the opportunity to visit the myriad of art and woodwork galleries, historic sites, restaurants and pubs.

On his return to the mainland, Paul initially toiled in his home workshop on the Sunshine Coast, then, as he built a clientele who appreciated his custom furniture and shop fittings, he was able to lease space in an industrial shed that he shared with an experienced boat builder and joiner. Over time he was able to do less carpentry work and more of the solid timber furniture work that he was passionate about.

After winning the design and build contract for The Reading Tree, excitement turned to mild panic as Paul felt the weight of responsibility of bringing the architects’ concept to life. Having been given a concept sketch to work from, hundreds of hours of CAD modelling and CAM work ensued. Already quite well versed in the use of some 3D modelling software, Paul was forced to further develop his skills.

‘With what was quite a tight timeline for a project of this size, I didn’t want to leave myself short of time for the making, so it was essential that I got stuck into designing and engineering the sculpture before 3D modelling. Once I was able to secure a custom order of 40mm thick plywood for the job, I had get to work on some scale prototypes to test proof of concept before I went any further.

Tree modules were glued, screwed and bolted together in the workshop. With a deadline promised and his reputation on the line, Paul worked long nights on his computer and days CNC machining. Photo: Borys Daniljchenko

‘This also enabled me to trial router bits, feed speeds and appropriate depth of passes in this new material. I ended up having to construct a number of scale models to test manufacturing processes and fabrication techniques until I was satisfied with how I would do things, because up until that point it was all theoretical.’ 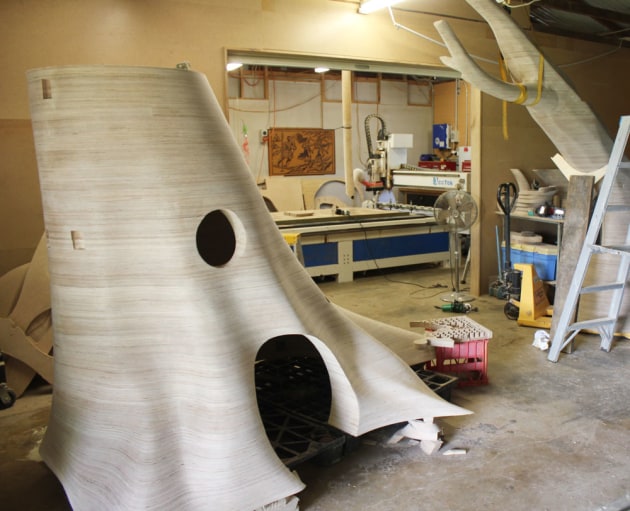 An engineer was engaged to approve Paul’s design for the structural elements of the tree. The upper limbs had to have a skeleton running inside them and other custom fabricated steel components. With a deadline promised and his reputation on the line, Paul worked long nights on his computer and days CNC machining. He broke the tree up into 20 smaller components. For his own sanity, each module was colour coded on his virtual model so he could keep track of what was going where. As time wore on, he fell into a steady rhythm of routing during the days and drawing and toolpathing the next day’s work at night. 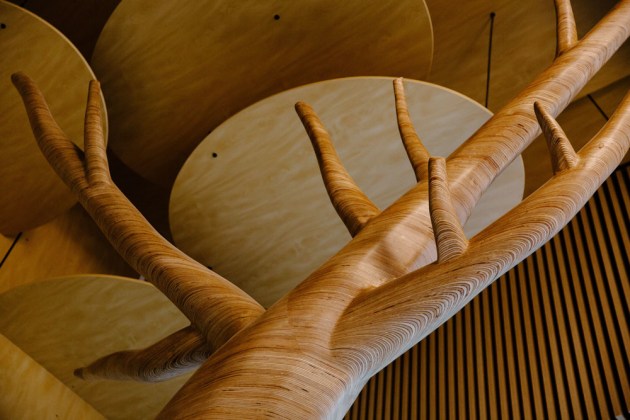 The upper limbs have a skeleton running inside along with other custom fabricated steel components. Round plywood suspended ceiling panels represent the tree’s foliage on the finished installation. Photo: Aimee Catt

‘During prototyping I was only routing three to four sheets of plywood per week, and soon realised this was not going to be fast enough to meet the deadline,’ said Paul. ‘Switching to new software optimised the toolpathing which significantly sped up the CNC routing process. But this change coincided with Christmas which meant I had to spend a lot of hours learning how to use the software when I would much rather have been spending time with my family. That being said, it was a valuable exercise because using the new toolpathing software I was able to increase my output to around two sheets of plywood per day.’

Tree modules were glued, screwed and bolted together in the workshop. Weeks of back-breaking sanding took place on the exterior of the trunk and limbs as well as in the internal cavern inside the trunk. Paul had to experiment with a variety of carving and sanding tools to suit various parts of the tree and needed to call in extra help with the mammoth task of sanding this almighty creation. 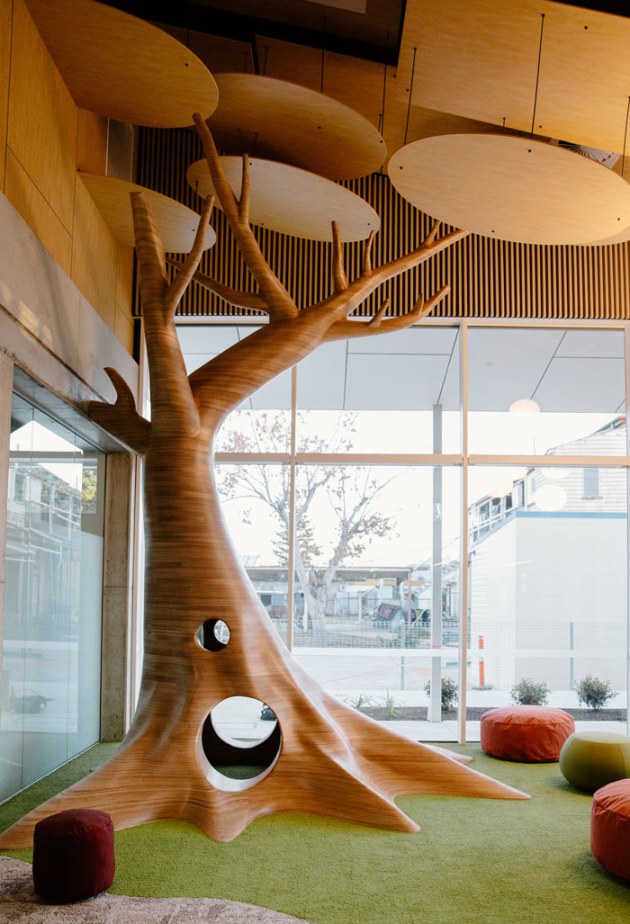 A product of CNC technology and plywood, the Reading Tree now stands five and a half metres tall in the new Ipswich City Council Library at Rosewood. Photo: Aimee Catt

The corner of the library where The Reading Tree was to live was envisioned as a space where librarians or visiting authors could read stories aloud to young children or where children could grab a book and read on the ‘grass’ under the tree and within the trunk. Paul’s young children tested the tree trunk space and for a while thought they were the owners of the coolest cubby in Australia...but unfortunately there were tears when it left the workshop! 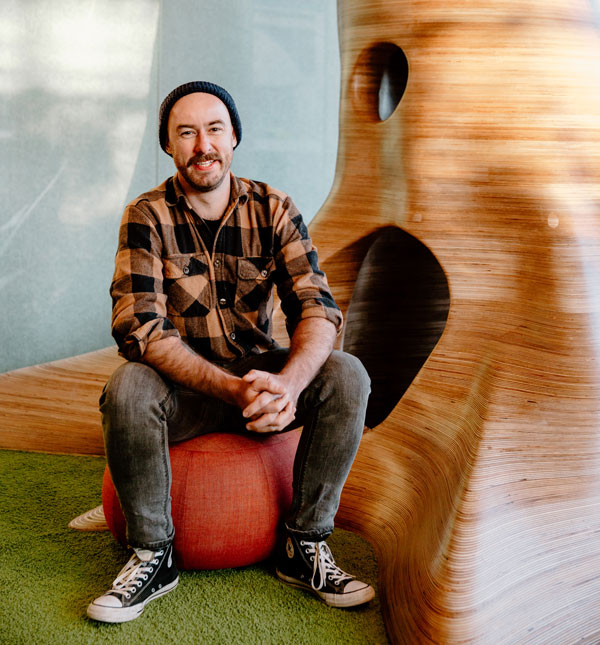 Paul Mitchell with the completed Reading Tree, a milestone in his making life. Photo: Aimee Catt

Once on site, assembly was done by Paul and a carpenter friend by hand until the tree reached a height of 2.7m, after which a small crane was brought in to help finish the job. The sculpture was completed with the round plywood suspended ceiling panels representing the tree’s foliage and green carpet for grass. The final product is a remarkable achievement that will be enjoyed by the public of Rosewood and surrounding suburbs for decades to come.

Learn more about Paul Mitchell via Instagram @farfarfurniture and www.farfar.com.au

Ben Dutton is a High School Industrial Technology and Design Teacher on the Sunshine Coast, Qld.