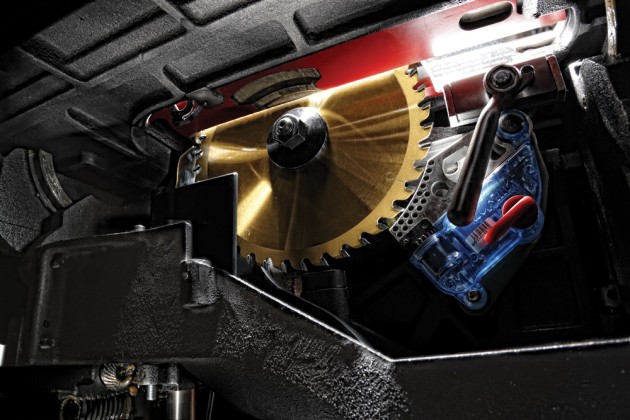 Above: Showing the undercarriage of the SawStop tablesaw braking mechanism. 10” standard brake cartridges sell for $130 however cartridges are replaced free of charge for for confirmed ‘finger saves’. Photo: Todd Eckelman

Is there a perfectly safe saw? The correct guards properly used will help to keep your tablesaw safe. A few simple safe operating procedures will help as well. Cleanliness and a good maintenance program will add more to your table or panel saw’s safety but even after all this, your machine still has a sawblade that will remove a finger before you even realise it’s gone. And it’s so
easy to do; a momentary lapse in concentration can find even the most skilled woodworkers in trouble. Enter the SawStop technology that instantly stops the spinning sawblade if you are unlucky enough to touch it.

So how does it work? Firstly, there are now a number of parallel technologies, so we’ll look at the original SawStop machine first.
On this machine the blade carries a small electrical signal. When the skin contacts the blade, the signal changes because the human body is conductive. The change to the signal activates the machine safety system. 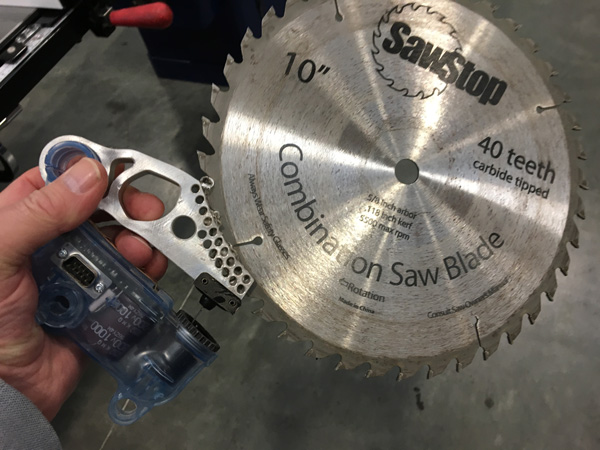 A block of aluminium springs into the spinning blade, stopping it in less than five milliseconds and the blade’s angular momentum drives it beneath the table. Power to the motor is shut off in the same action. You can re- set the machine, but this requires a new brake mechanism that Carbatec currently sells for $130 and you will certainly need a new blade as the brake and blade are usually fused together in the impact. 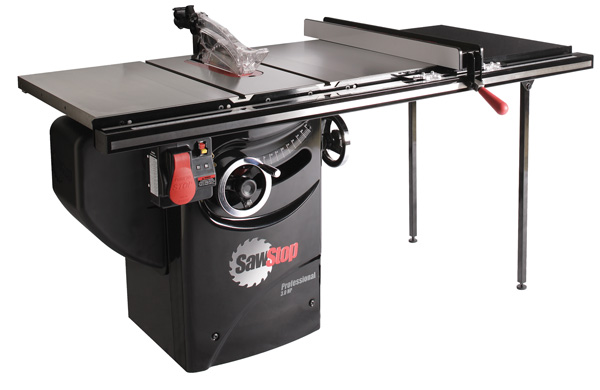 The technology was invented by Dr Steve Gass in 1999, and in 2004 the first SawStop tablesaw was sold. SawStop is a privately-owned company based in Portland, USA. The technology won Time Magazine’s ‘best new inventions’ for 2006 award and rightly so. The machine was first brought into Australia by Gabbett Machinery, now SCM Australia, and exhibited at the AWISA trade show in Sydney in 2010 where live demonstrations were held using a sausage in place of a finger. The best customers of this new technology were schools, especially secondary colleges. SawStop is now sold by Timbecon in Melbourne and Perth, and by Carbatec and Total Tools Australia-wide. 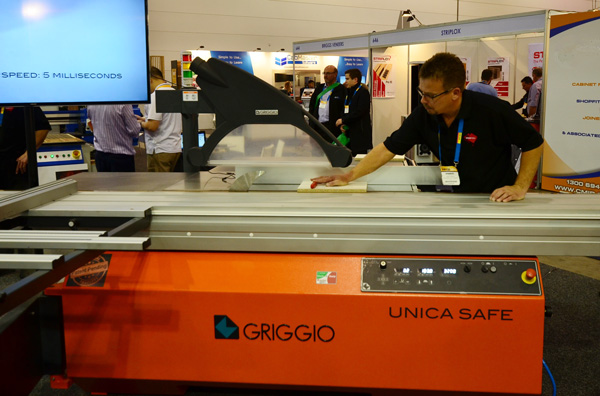 Another machine with similar technology is the Bosch Reaxx machine. There’s no aluminium block and the saw stops naturally after being dropped below the table. A test done by an American tool review site revealed a 25mm cut in the palm of
a human hand when slapped onto a Reaxx machine blade protruding only a few millimetres above the surface
of a piece of wood. The same test on the SawStop machine produced only a minor scratch. It’s worth noting that both these technologies draw blood.

SawStop is now owned by Tooltechnic Systems, a family of companies that also includes Festool. Bosch ran into copyright trouble from SawStop in 2015, even though there were some differences in the two technologies. One can understand SawStop’s position but denying others developing similar safety technology limits the user’s choice of machine if they want the new safety systems. Bosch has discontinued the sales of their Reaxx machine leaving SawStop as the only machine currently available with skin sensing technology.

Back to the future

Heavy industry usually drives change, just look at all the technologies we enjoy today as a result of the development of technologies like the Space Shuttle, for example. What will drive the future of ‘sawstop’ technology will be machines built for industrial applications. Two such companies are currently developing related technologies and while Australia may not see these machines on sale in the next one or two years, it’s very exciting news for the industrial woodworking sector. The two companies are Altendorf and Felder, both very well known also to the small and hobby woodworker. Both technologies are different in their approach to the issue of hand safety, but both are (reportedly) bloodless in their approach.

The Altendorf solution relies on detecting the hazard at an earlystage. Various defined situations are recognised and classified using a number of cameras to gather information about the operator’s activity. A computer interprets this and if it detects a hazard, it responds by warning the user in two stages. 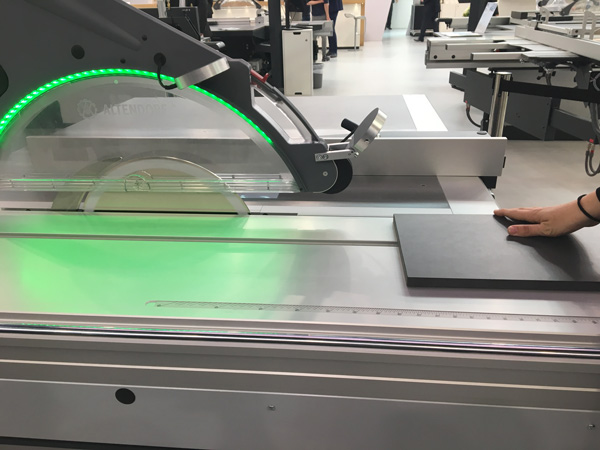 On the Altendorf machine the light shines green for normal operation. 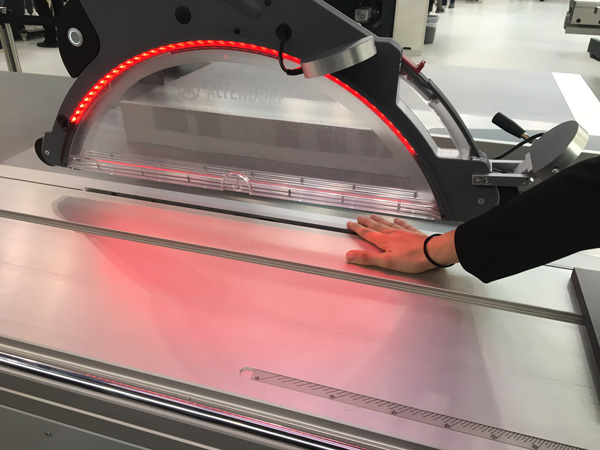 Red light shows that hand recognition has been triggered by a 3D camera, causing the blade to drop below the table. The blade is not damaged and the machine can be turned on and run again. Photos: Philip Ashley

Stage one is an optical signal: lights on the overhead guard. Stage two is the blade slowing slightly so the operator is aware of the danger. In stage three, the main sawblade stops very quickly and the whole saw unit rapidly drops beneath the table. There is no aluminium brake and the saw can be instantly reset and used normally.

The Altendorf Safety Assistant or ASA is the working title for this new development. The new system was shown for the first time at the German Ligna fair in late May and there were a lot of exposed cables and cameras on the prototype. These will obviously be hidden and miniaturised by the time the system goes on sale as an optional accessory.

The patent applications have been filed and the process is under way, which means realistically the system will not be available to buy before 2020. It will be interesting to see if Tooltechnic Systems objects to either the Altendorf or Felder developments.

We are taught that the best safety is the safety that you cannot see; the safety that’s actually part of the machine and Felder Group proved at Ligna that this is in fact possible. Five years ago, Felder Group started a project with the University of Vienna with Sascha Wein, master joiner and managing director of the Joiner’s Trade Guild in Munich.

This all came to fruition at Ligna with a ‘sawstop’ system completely integrated into the machine. Apart from the name PCS Stop (Preventive Contact System) emblazoned on the front cover, you would never know this saw was one of the safest machines ever made.

Above: Felder’s Preventive Contact System is based on the electro-magnetic law of repulsion and allows for an extremely short response time of a few milliseconds. PCS works without consumable parts as the machine can be immediately used again. The Format 4 kappa 550 sliding table panel saw with PCS will be available in Australia in 2020. Photo: Felder Group

When the risk of an accident is detected, PCS triggers the rapid lowering of the sawblade under the machine table. The function, based on the electro-magnetic law of repulsion, allows for an extremely short response time of a few milliseconds. The PCS safety lowering mechanism works without damage to the blade, so like the Altendorf, there’s no extra cost. The sliding table panel saw is ready to use again at the push of a button. The technology was actually demonstrated at Ligna with someone’s real finger!

There is no doubt that all these clever safety systems reduce severe injuries. A contact system like SawStop will draw blood but only leave a small scratch, a small price to pay on a low cost machine. No doubt Altendorf and Felder will eventually offer their technologies on their low end machine models but this will take many more years and may add a reasonable amount to the price of a new machine.

What is not clear yet is how this technology will function in real working conditions. The SawStop machine has been known to misfire; will the cameras and associated computer systems work on the Altendorf? Will the built-in Felder system function as designed? Time will tell, but if they do what they are designed to do, your work will be a lot safer as a result.

Philip Ashley lectured in furniture making and wood machining skills at Holmesglen TAFE (Vic) and headed the department for seven years until his retirement. He has written extensively for Australian Wood Review.