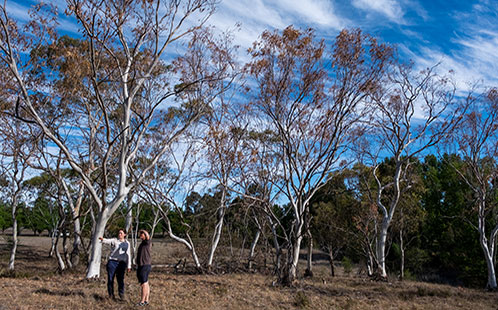 For many regions of eastern Australia, 2019 had the lowest rainfall and highest temperatures on record. In a desperate effort to survive the extreme drought conditions, eucalyptus trees began to drop their leaves, giving them a burnt or dead appearance. New research from Western Sydney University, published in New Phytologist, can now offer an explanation for this phenomenon known as ‘dieback’.

Dr Rachael Nolan, the lead author of the research based within the University’s Hawkesbury Institute for the Environment, said by the time the drought broke and it finally rained in early 2020, millions of trees across Australia appeared to have died.

“Dieback is the term for when eucalypt trees drop their leaves. Although they and can appear burnt or dead, they are still alive and can resprout when it rains,” said Dr Nolan. 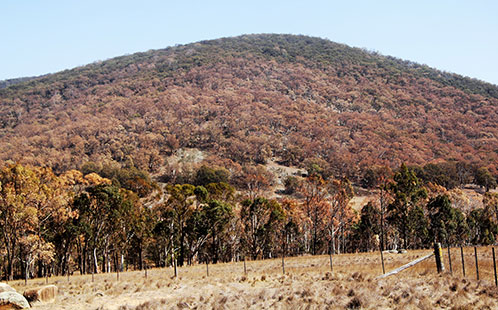 Evidence of dieback can be seen on this hillside.

The researchers found that dieback occurs when trees can no longer access enough soil moisture.

“We found a close connection between the size of tree, the level of canopy leaf loss and die back, and the level of physiological water stress inside the tree,” said Dr Nolan.

“The longer that drought goes on, the more water stress increases – making it difficult to maintain the columns of water inside the tree. This link between drought stress, internal embolisms and canopy dieback connects the dots as to why trees experience dramatic loss of foliage that pushes them closer to their physiological limits.”

The visible effects of widespread dieback are clear in locations right across Australia: from the jarrah forests of Western Australia to the high plains of Armidale and the alpine regions of New South Wales and Victoria.

A slow recovery is underway from Australia's three-year drought, which lasted from 2017 to 2020. Despite good rains in 2020, Dr Nolan said many trees have remained leafless – suggesting that they may have crossed the point of no return. 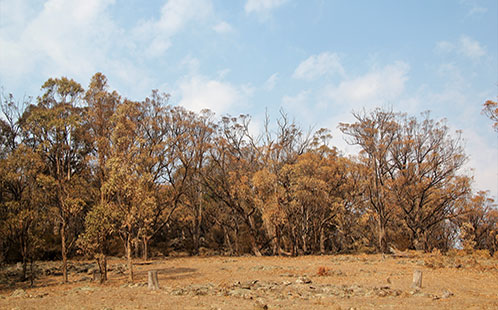 Another example of dieback, the causes of which are being researched.

To address this issue, the NSW Environmental Trust has announced nearly $1.2 million in new funding including a project worth $198,707 awarded to Western Sydney University to examine the causes and drivers of eucalypt dieback.

The project, titled ‘Determining the physiological underpinnings of eucalypt dieback in New South Wales’ uses advanced research capabilities at Western Sydney University’s Hawkesbury Institute for the Environment to further research programs that use non-invasive imaging and physiological analysis techniques to uncover the causes of dieback.

“Eucalypt dieback is a serious threat to many eucalypt-based ecosystems, and the causes are complex as the combination of issues such as drought, heatwaves, fire damage, insect attack and climatic change put major stress on our trees,” said Associate Professor Brendan Choat, a researcher at the Hawkesbury Institute for the Environment.

“Our aim is to be able to find that physiological limit to drought stress – how long and how far a tree can go before signs of critical hydraulic failure occur at which point the tree is likely to experience severe drought stress that may prove to be irreversible,” said Associate Professor Choat.