Made for the New Zealand high commission

The June issue of Australian Wood Review takes a close look at the benefits of undertaking workshop intensives, specifically the experience of the eight people who took part in an open studio residency led by Michael Fortune and Kelly Parker at the Centre for Fine Woodworking in New Zealand early this year.

While leading the journey of each participant, Michael and Kelly also worked on developing new designs of their own. Workshop technician and designer maker Lou Fuller was also on hand to manage the machine shop and provide technical assistance for the participants.

During the residency Michael Fortune designed and prototyped a new chair to match a table previously made for an existing client. The prototype shown for the Fantail chair (shown above) was further refined and completed on his return to Canada.
As well as being able to look over the shoulder of Michael and Kelly as they worked, participants could watch Lou construct furniture designed by Michael for the Canadian High Commission in Wellington, New Zealand. 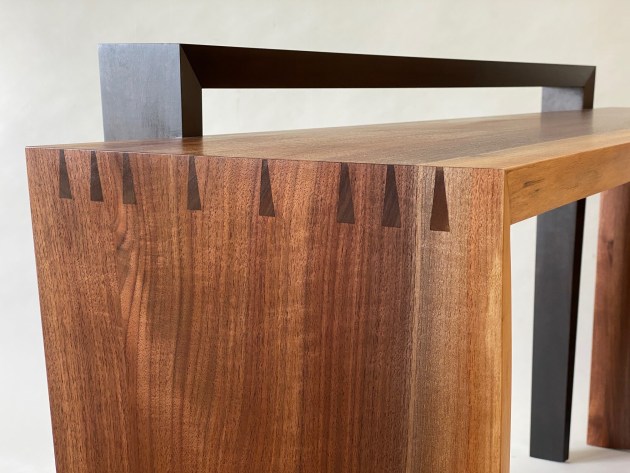 Mitred dovetail joinery was used for the High Commission signing table ‘so (it) presents as a completely clean surface and the only the tails are visible on the ends,’ explained Lou.

The pins were cut using a custom built jig which allowed the sockets to first be excavated with the router as squared joints. The waste was afterwards cut out by hand using a modified handsaw followed by a lot of chisel work. ‘The jig gave perfect shoulders for the 44° join Michael wanted,’ said Lou. The subtlety of the leg incline is further accentuated by a taper on the legs. The tails of the joints were bandsawn out and chiseled by hand to fit.

The richly coloured air-dried American black walnut came from a 65mm thick, four metre long flitch that was then ripped on the bandsaw. The signing table has a separate backpiece which is notched in at the rear of the table. 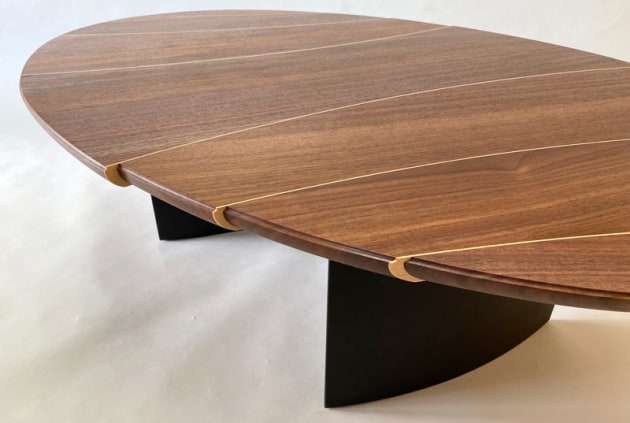 The oval table was designed to suit the size and purpose of the public waiting room immediately inside the High Commission offices. ‘There was a rectangular table previously in that space that made the chair placement rather formal with chairs lined up side by side. The oval table I designed encourages a more conversational atmosphere,’ said Michael. ‘I submitted only two sketch alternatives, never more. If I haven’t “hit the nail on the head” then I consider it my fault for not providing a suitable answer and rationale for the given brief.’ 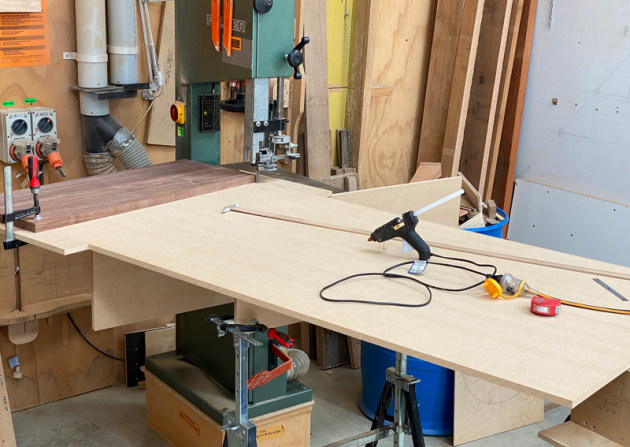 Michael described how the curved segments for the roughly two metre radius table were cut. ‘The pieces were arced through the bandsaw on either side of the blade. The parts were held in place with a few tack welds of hot glue. The jig ran on the waxed vertical guide attached to the bandsaw table. The garbage receptacle was weighted so the pivot point was stable.’ 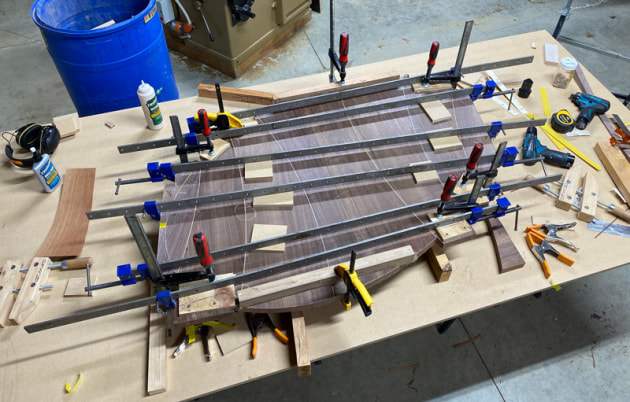 All the offcuts from each segment was saved and glued to plywood squares faced with sandpaper. This provided the clamping surfaces for the oval during assembly. 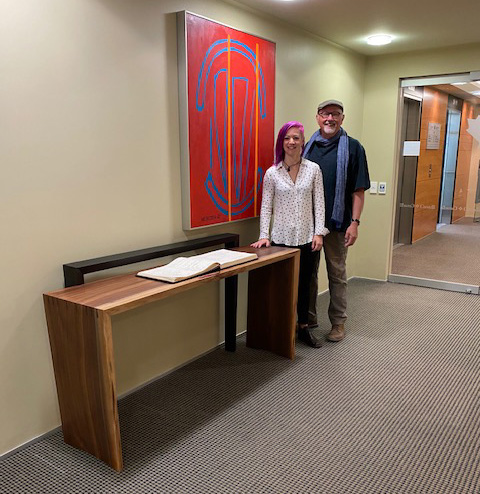 Both pieces were hand delivered by Michael Fortune and Lou Fuller to the Canadian Consulate in Wellington, March 2020.

Wood Review magazine is available from newsagents and selected retailers.