Kayaks by The Floating Project

Project Nine is the first major project to be launched by The Floating Project (TFP). The Floating Project is a product design workshop that focuses on designing and making a variety of products mainly using wood as their main material. They don't just focus on kayaks but the whole scope of TFP is to create a platform for creativity that allows them to develop and explore various concepts that result in functional items. 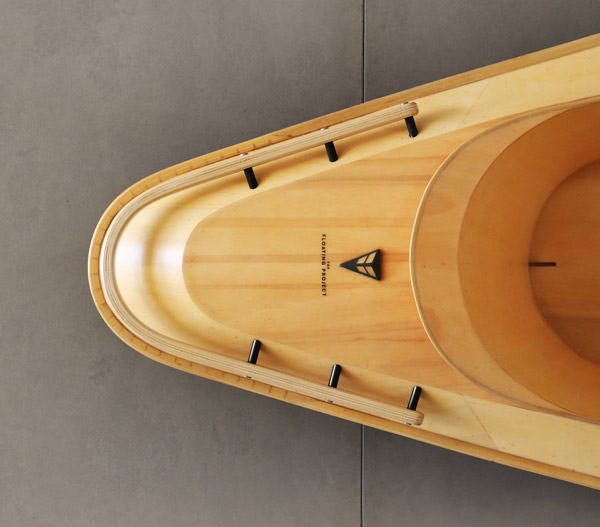 The Project Nine is their most ambitious project so far which took three years of development and prototyping to get to this point producing nine full scale prototypes in order to test the various aspects of the kayak. They wanted to create something which would be fun to produce from a manufacturing point of view and which encouraged interaction and pleasure when completed. Located on the tiny Mediterranean island of Malta, what better product could be designed to enjoy the summer days by the sea.

Project Nine is a sit on top recreational kayak which has been hand built mainly out of 3mm poplar plywood. It is built using the stitch and glue technique and has been designed from scratch by Neil Pace O’Shea at the Floating Project. The design allows for great stability in the waters, great comfort while paddling and easy handling since it only weighs 15 kilos.

This 2.5m long kayak takes around four weeks to build from scratch. A series of templates are routed out and hand stitched together to form the overall form. Epoxy resin is used to hold all surfaces together and after a few hours of sanding, the paint job is applied. Three solid tulip wood steam bent handles are placed strategically and allow for easy transport while a rear hatch allows for easy access into the back storage compartment.

Users can customise the look of the kayak by choosing their desired colour for the rear end while also naming their kayak just like you would name a boat.

Get in touch with Neil Pace via Instagram @the_floating_project